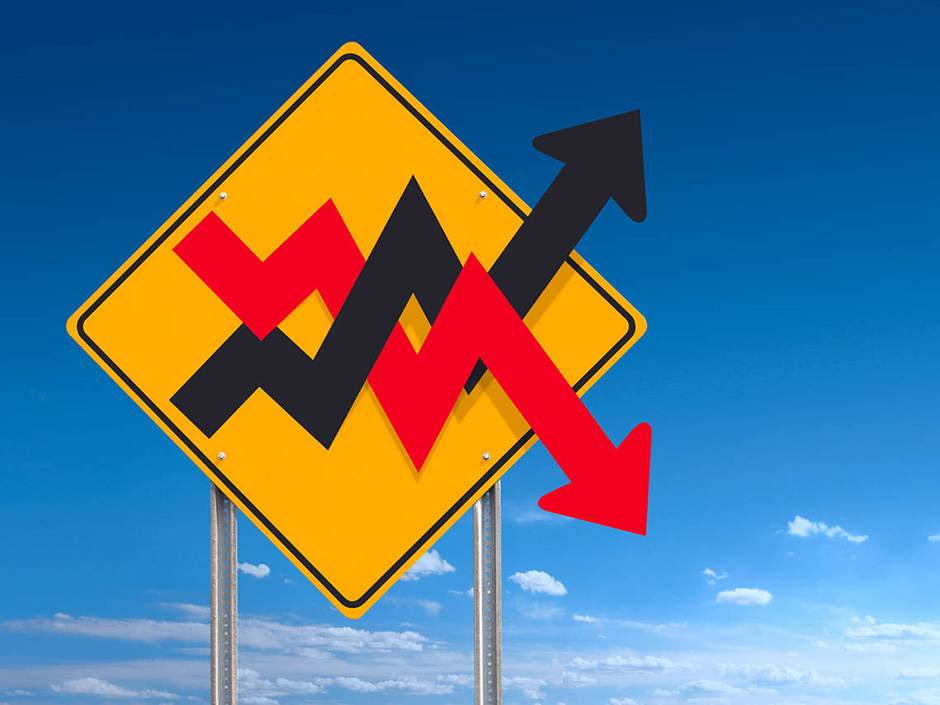 Markets never move in a straight line and the 12% correction in the S&P 500 in late January sent an IV shockwave through the financial system from which it is still attempting to recover. What usually follows a large volatility event is a counter reaction followed again by smaller events until either the old market regime re-asserts itself or something even more dire happens.

We now find ourselves at that very threshold at which the market direction for the remainder of this year will be determined.  And that incidentally not only applies to equities but also to the FX and crypto space. What happens here will set the stage for whatever transpires over the rest of this year and beyond, so we’d better pay attention. 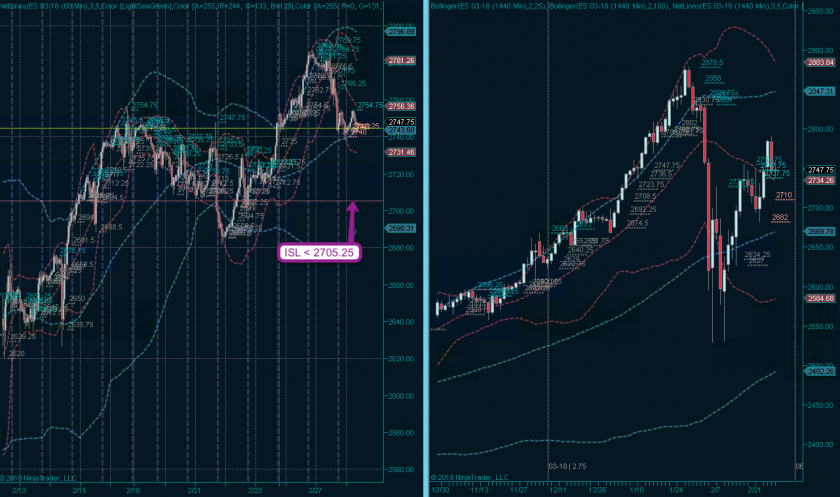 I best speak in charts, and I usually put my money where my mouth is. Which is why I just grabbed a long position here with a stop below 2705.25. For one the formation on the short term panel is looking very bullish to me, so does the sequence of higher highs and higher lows on the daily. Until I see a breach < 2682 I have to be long here.

Should we breach below that then I would have to get confirmation via a breach and retest of the 100-day SMA. Only a spike high below that mark would get me to take on short positions. The exception being that I see very concerning divergences on my momo charts and of course our trusted Zero indicator: 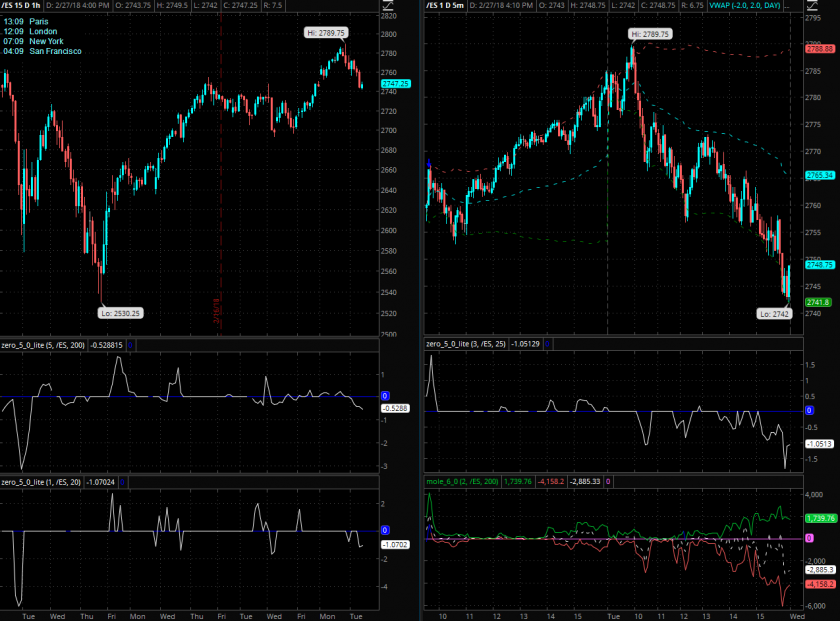 Which by the way consistently pointed downwards during yesterday’s sell off. However I don’t see any major warning signs on the hourly panel (left). It is slightly divergent but not sufficiently yet to warrant short positions. If you are a short here then I suggest you trail your positions and keep an eye on the Zero signal (in case we get a bullish divergence today or tomorrow). By the way if you trade the E-mini and you are not a subscriber yet then sign up here – you’ll be glad you did. 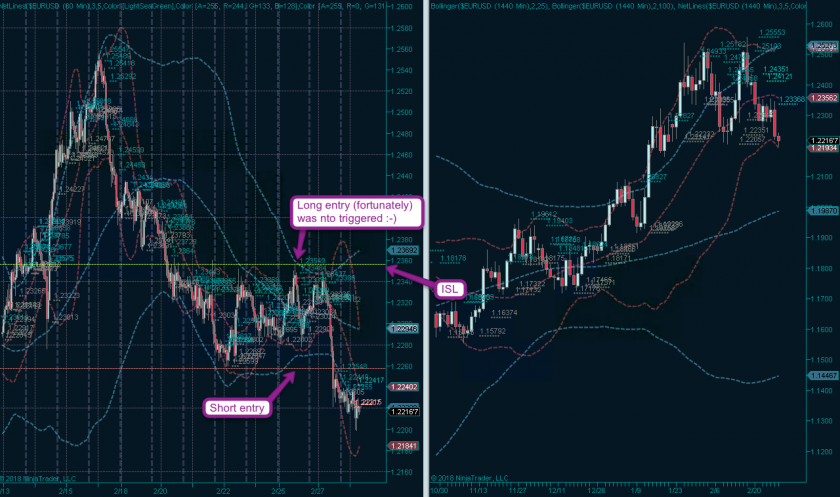 Now on the currency front the EUR/USD has been somewhat weakening recently and then stabilized in a ‘wait and see’ formation in anticipation of Powell’s speech. I wasn’t even aware that he was scheduled to speak until sometime Friday when I checked the event schedule for the coming week. Which once again speaks to the power of simple price action to tell you what’s up without having to follow a ton of fundamental or macro-economic data.

Since Jerome Powell’s slightly hawkish hearing in Congress the Euro has once again descended lower and in the process managed to trigger a short position I had proposed sometime last week (to the subs that is). It’s a bit too early to move my stop to break/even as price action is choppy and there may be another push higher. As a matter of fact I don’t think the odds are great for this campaign and it only was presented as the potential payoff could be large due to a potential long squeeze scenario. My target range for this campaign would be near 1.2 from where its 100-day SMA currently hails. 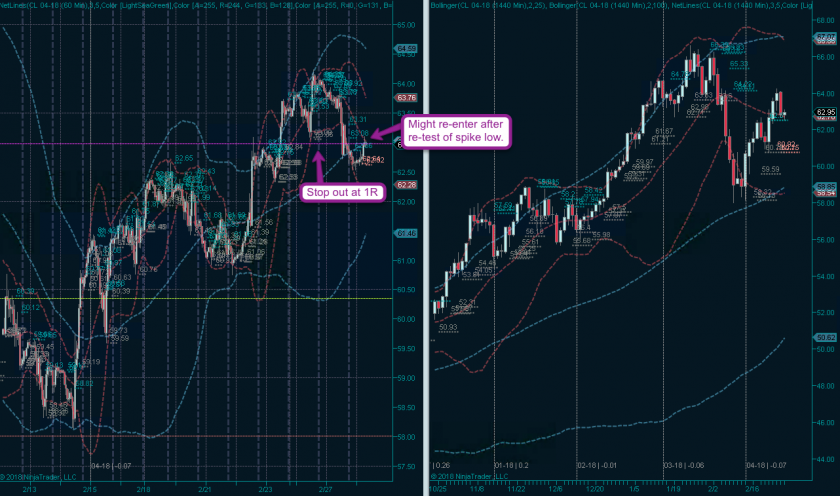 Crude is a stop out at about 1R of profits – not much given the time it was active but we always need to adjust our time horizons to the price action and not the other way around. Some symbols move slowly but steadily, some more volatile (BTC sends its regards), and some do both for extended times. Crude isn’t in an easy market regime right now and trading it takes patience. However when it starts trending then it usually makes a b-line for its target range – hopefully we’ll see it switch back to that soon again.