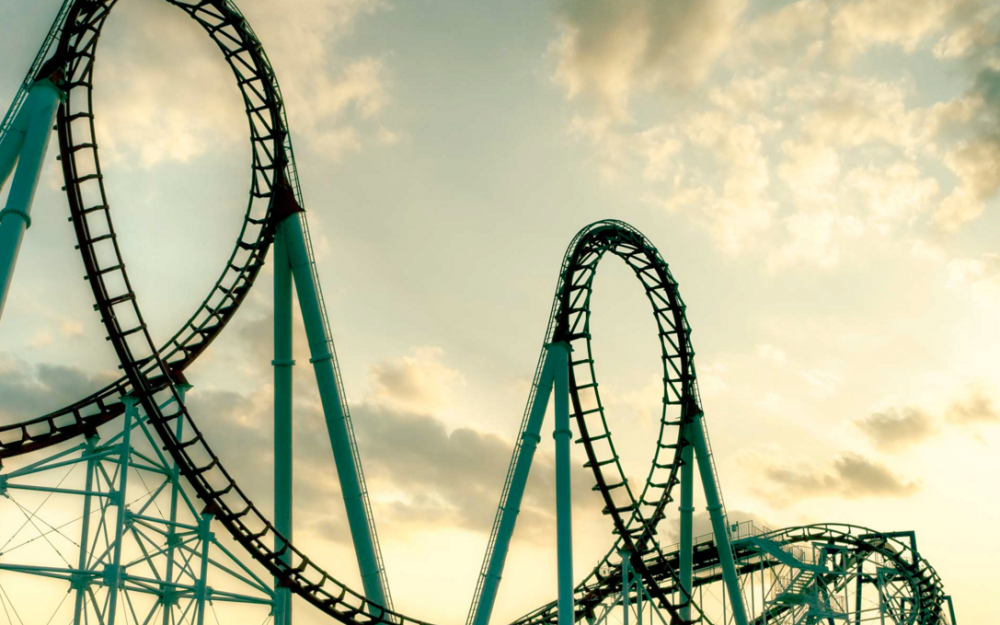 Frankly I have very little worth sharing today, and it’s not for a lack of trying. Having scanned through my entire charting universe over the past two hours I found very little worth consideration. Clearly equities are stumbling as we’re running a bit out of participation, which by the way has been pretty thin for the past few weeks, only emerging in sudden surges when necessary. 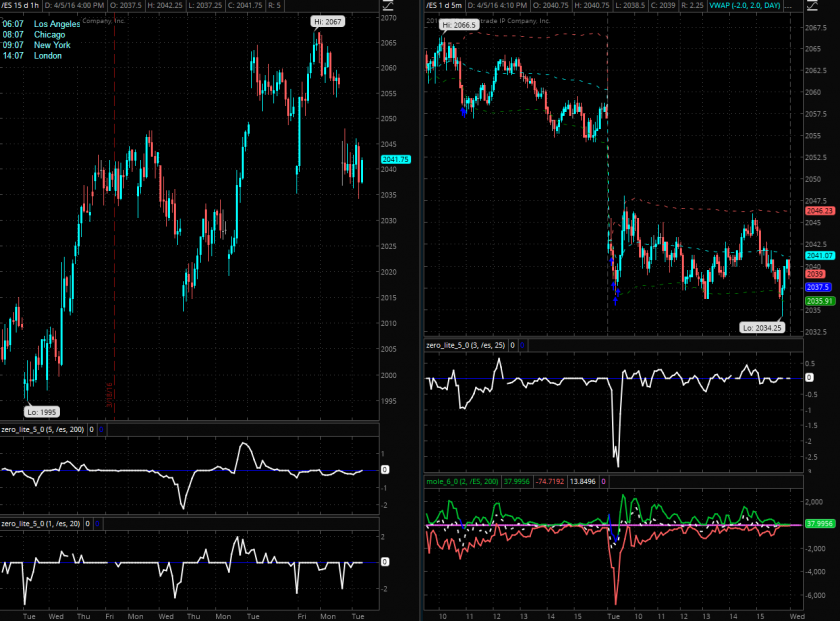 The Zero indicator has provided us with a lot of valuable context via the absence of a credible trending signal. If you direct your attention to the left panel, which shows the hourly candles, you would agree that the signal has been spotty at best. The only participation that produces strong buying pressure are quick ‘stick save spikes’ banging the tape higher.

Yesterday there was quite a bit of talk in the comment section about bearishness among market participants. Word also has it that some fellow bloggers have been switching into bear mode. Well, given the thin participation on the way up I think that’s absolutely justifiable, but I still have issues finding a good technical entry. 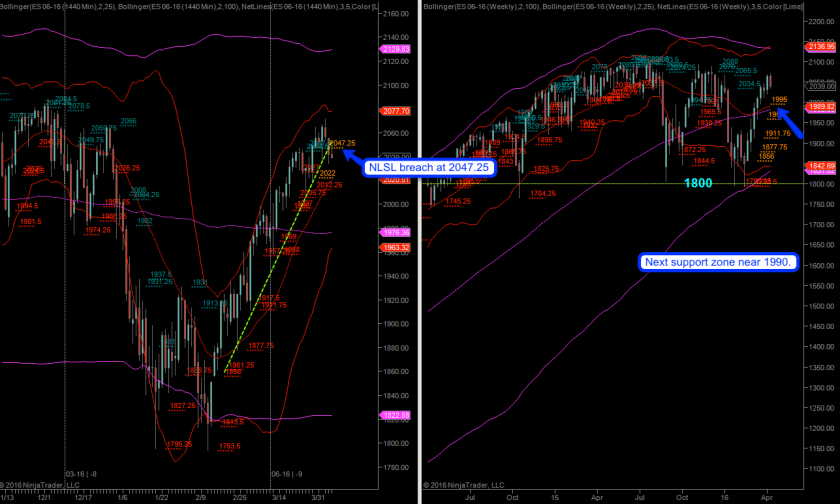 In terms of technical context the E-Mini triggered a Net-Line Sell Level breach yesterday. That’s fine but usually not enough for me to get involved. At minimum I would like to see one more attempt to pump it higher which is met at rejection at the NLSL. The weekly panel on the right suggests pretty heavy support near the 1990 mark. We have a NLSL at 1995 and both SMAs (25/100) near 1990. So that limits our profit potential as of right now. Which doesn’t mean snagging an entry here would be useless, sometimes we get lucky.

But what I don’t want to do right now is to chase consensus and grab short positions right here when we already are working off bullish momentum. I want to be teased, wined and dined, and maybe if you rub me right I may put out 😉 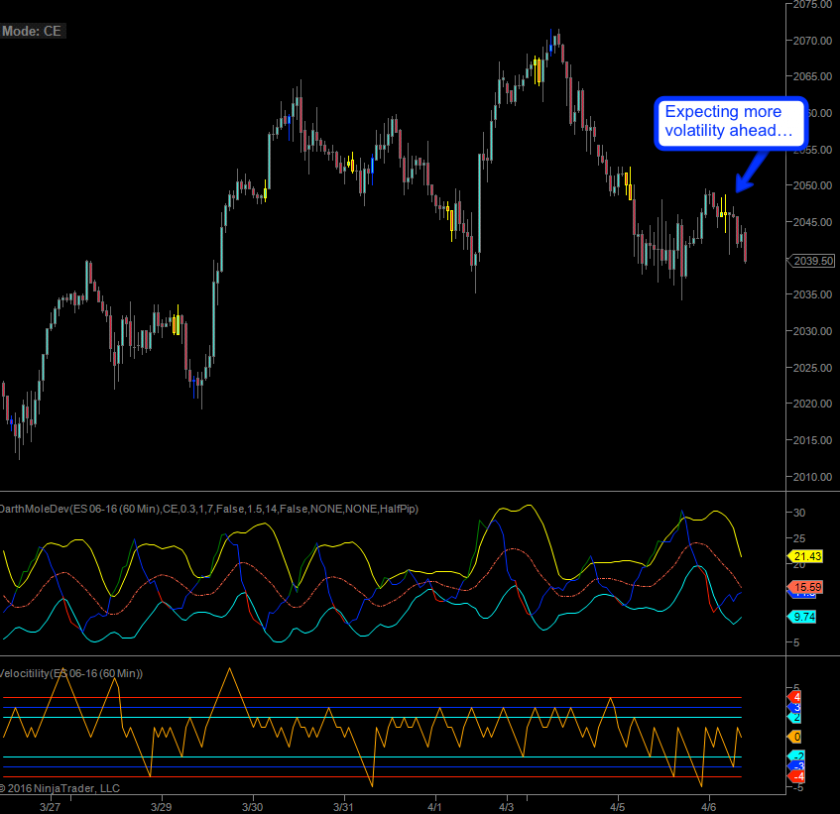 When in doubt I usually take a peek at my volatility roadmap in search of valuable clues regarding entry viability and the risk of whipsaw. The yellow candles mark times when volatility is expected to have bottomed out and the blue candles periods in which volatility is expected to kick into high gear. The latter is useful as we quite often see those at the onset of a little fake shake out that draws participants into the wrong direction. There are exceptions of course but in general yellow tells me that volatility is about to expand and that I need to watch my six.

What’s interesting is what happens right after those yellow candles. A quick big move to me suggests that we may be painting a trap and I’m usually on the lookout for evidence supporting the idea that monkey business is afoot. If the tape has been trending hard (high signal on the trend panel) then that increases the odds of shake out tape, which includes quick whipsaws, stop runs, gapping action, etc.

When I see a yellow candle after the tape has been already stuck in whipsaw tape for a while, as evidenced by a very low trend signal (i.e. -3 or -4) then it’s more likely that we’ll get a more smooth resolution and that a trend may lie ahead. A good example of that is the tape near the 29th of March. We still produced a fake out but even if you took a short position there you probably got away with 1R in your pocket.

The situation right now has us post two relatively extreme low readings on the trend panel. Now we’re screwing around a little and may soon see trending tape. Whether or not that will be to the downside remains to be seen – realized volatility is agnostic to direction (down or up produce high readings which can be plotted), contrary to implied volatility (IV) which is an unsigned number.

I have only one setup today and it’s a good one, but will need to keep that one for my intrepid subs: