As mentioned on Friday – I’m a bit strapped for time this weekend, so this forecast is served Speedy Gonzales style. However, that doesn’t mean there is no meat on my charts – as a matter of fact, they are juicy and succulent. As usual we are looking across the board to develop a good sense of the odds for next week.

Alright, let’s get right to it: 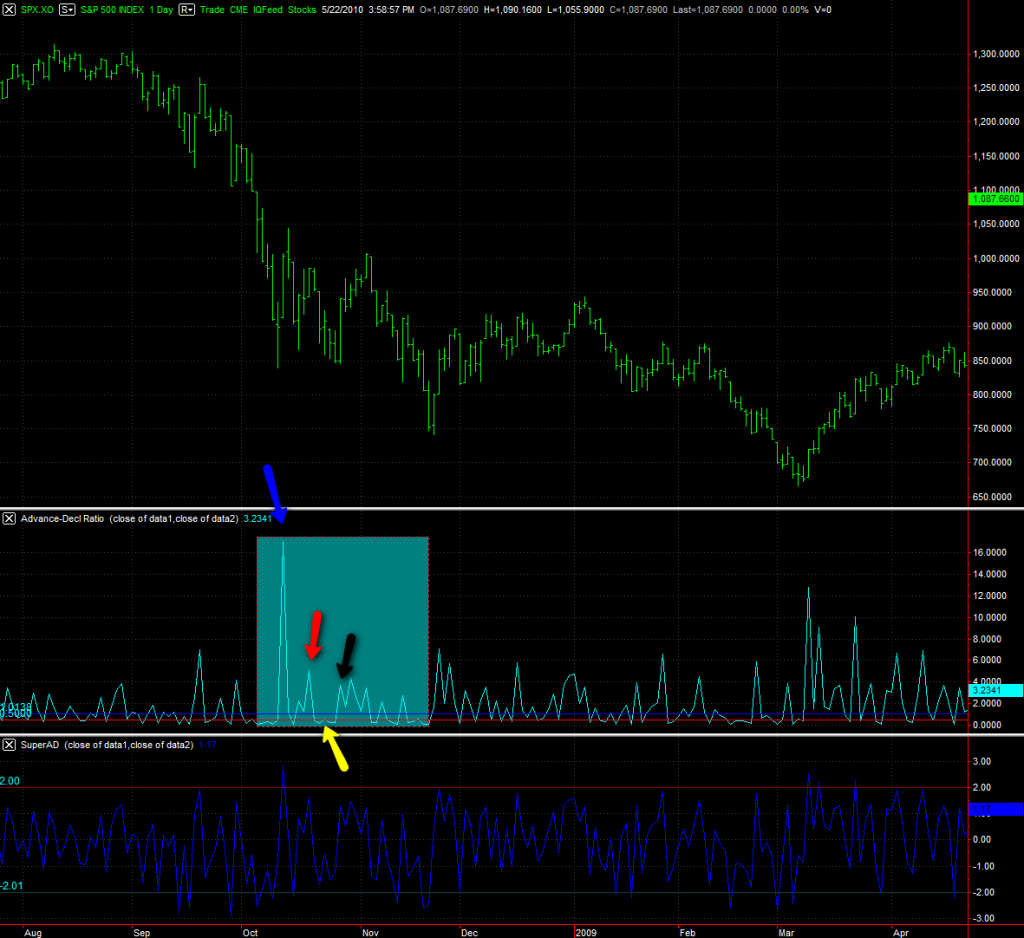 As you all know I am still following the developing fractal on my NYSE A/D ratio chart. This is the 2008 pattern… 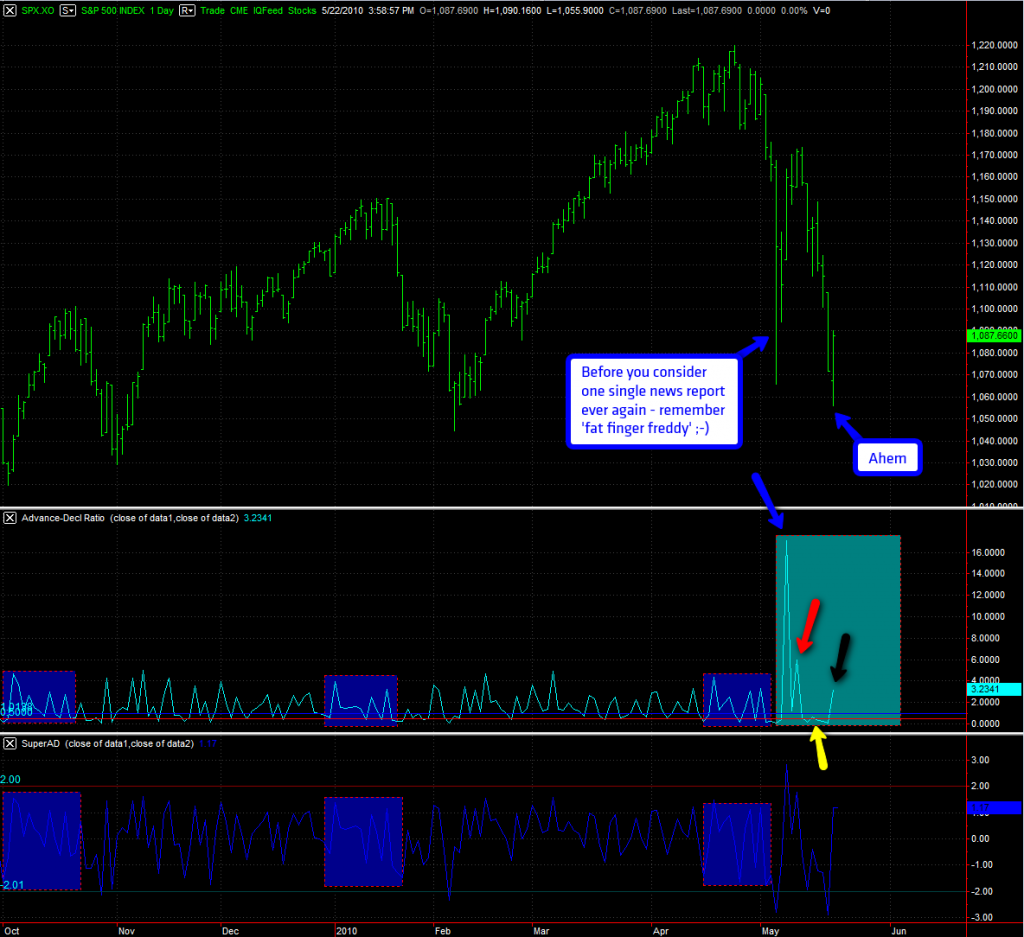 … and this is where we are today. Although not identical the resemblance is almost uncanny. According to this we should see a temporary correction lasting a week or less followed by a final drop lower. The timing is of course relative – this pattern seems to unfold much quicker. 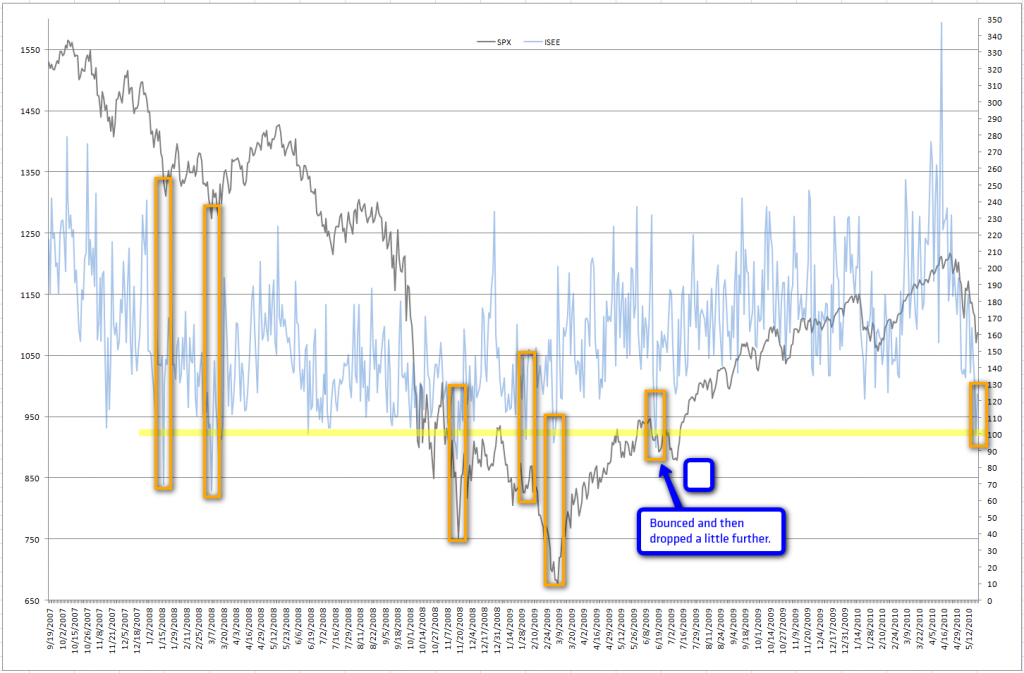 Last time we looked at our ISEE Equities chart we marveled at the historic record bullish reading of 350, which was way outside the 2nd and maybe even 3rd standard deviation. In other words – hapless retail traders were chasing the market up. It’s strange how people keep repeating the same behavioral pattern over and over again, much to their financial detriment I may add. It’s what Prechter often refers to in his own pertinent work, which he calls Socionomics. Well- as so often retail traders chased the market right at the top and the rest is history.

However, we are now on the opposite end of the sentiment scale. A 100 reading usually means that a low is either in place or will be in the near term future. Yes, we may see lower readings – after all we did not anticipate a reading of 350 either. However, my personal opinion is that it is a bit early in the game for that – I would expect sub 100 readings during Intermediate (3) of Primary {3}. 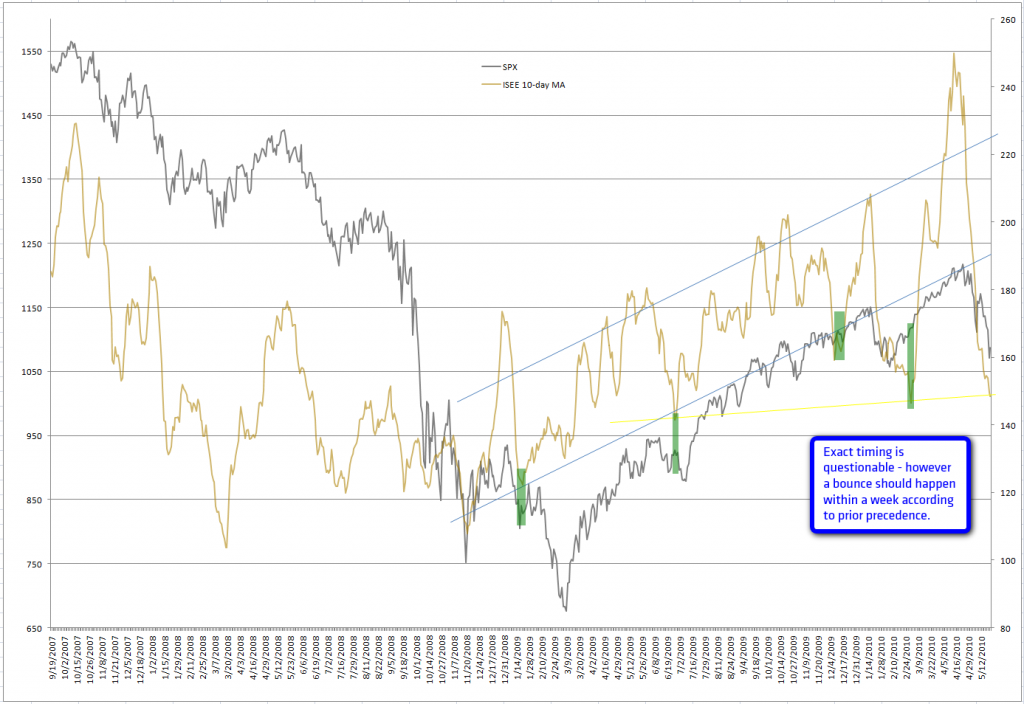 Here is the 10-day SMA version of the previous chart. As you can see we slowly gyrated higher inside a rising channel. Then there was an outlier – or throw-over as they call it. Now we are at a bearish support line which spans from the summer of 2009 through the last ‘great bear squeeze’ to today. A reasonable assumption would be that we push higher towards the channel and then ideally fail – assuming that we are in Primary {3}. 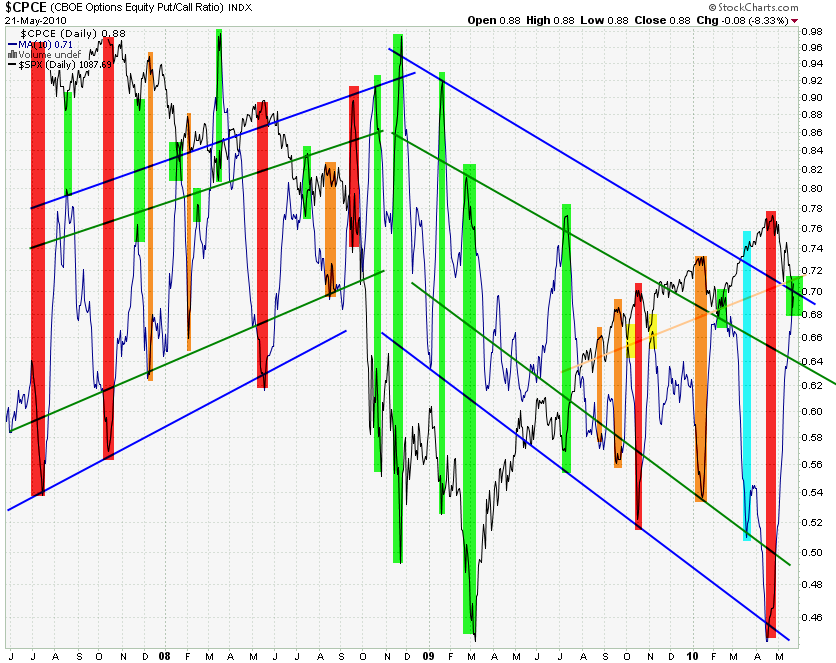 My CPCE 10-day SMA chart has also snapped back to the other side of the sentiment scale – considering recent patterns that is. And that’s really where the rubber meets the road when it comes to charting. A channel only works until it is broken – we see that happen on daily price charts almost on a daily basis. But until this happens the odds here are now shifting to the long side, even if it’s only temporary. 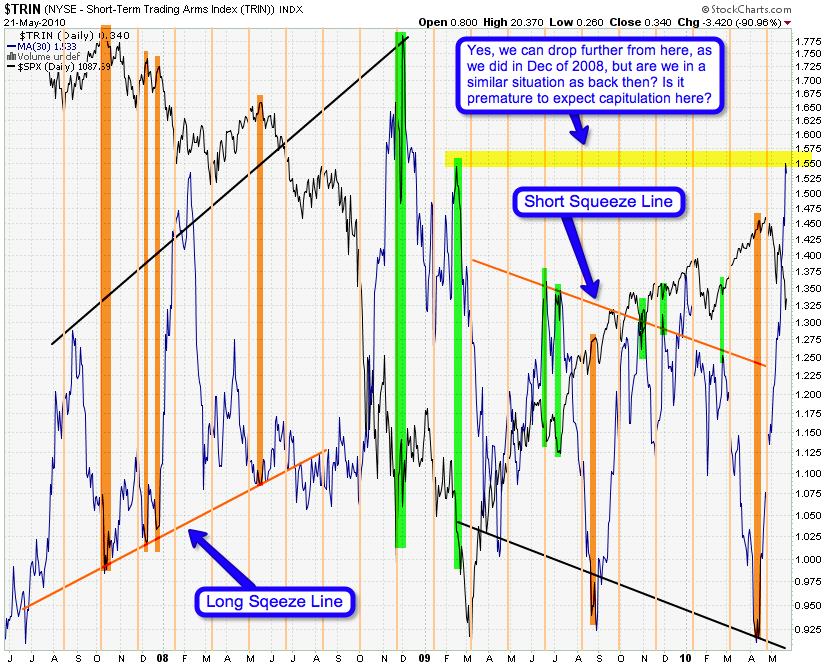 This is actually my favorite chart this week. The TRIN is notoriously difficult to chart (mostly because everyone looks at the raw signal) but I think I’m getting a handle on this thing. After staring at this chart for a few hours now it reveals a clear depiction of long and short squeezes – the former happened in the ruthless 2008 sell off, the latter of course in the eternal buoyant market of 2009. Traversing the blue line you can basically watch long traders getting killed trying to pick a bottom. Similarly in 2009 you can see the bears lose their shirt trying to short a market that just wouldn’t quit. 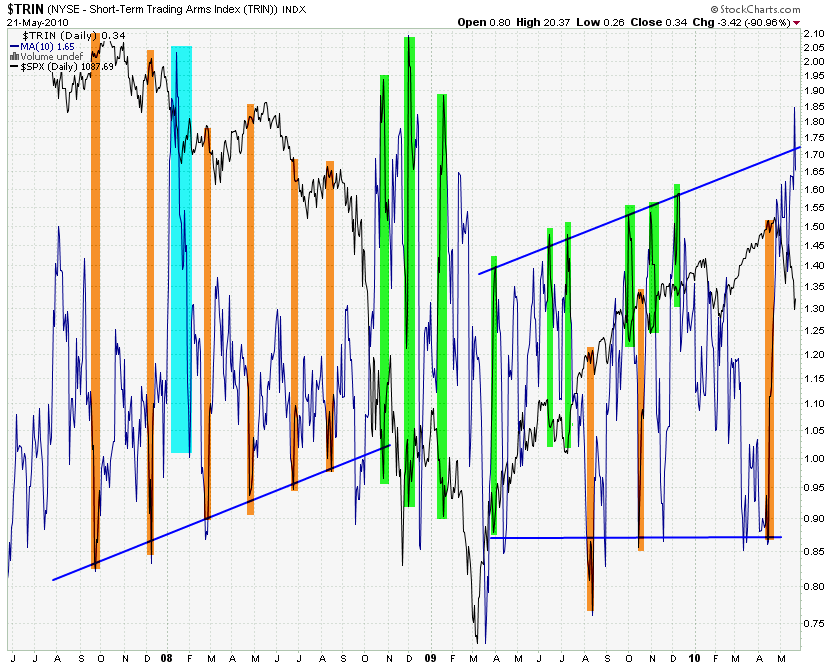 Here is the 10-day SMA version of the same chart. Again, we are in overbought territory and again it’s not where I would want to be short term positioned to the downside. Long term is another story – as I keep repeating almost on a daily basis. 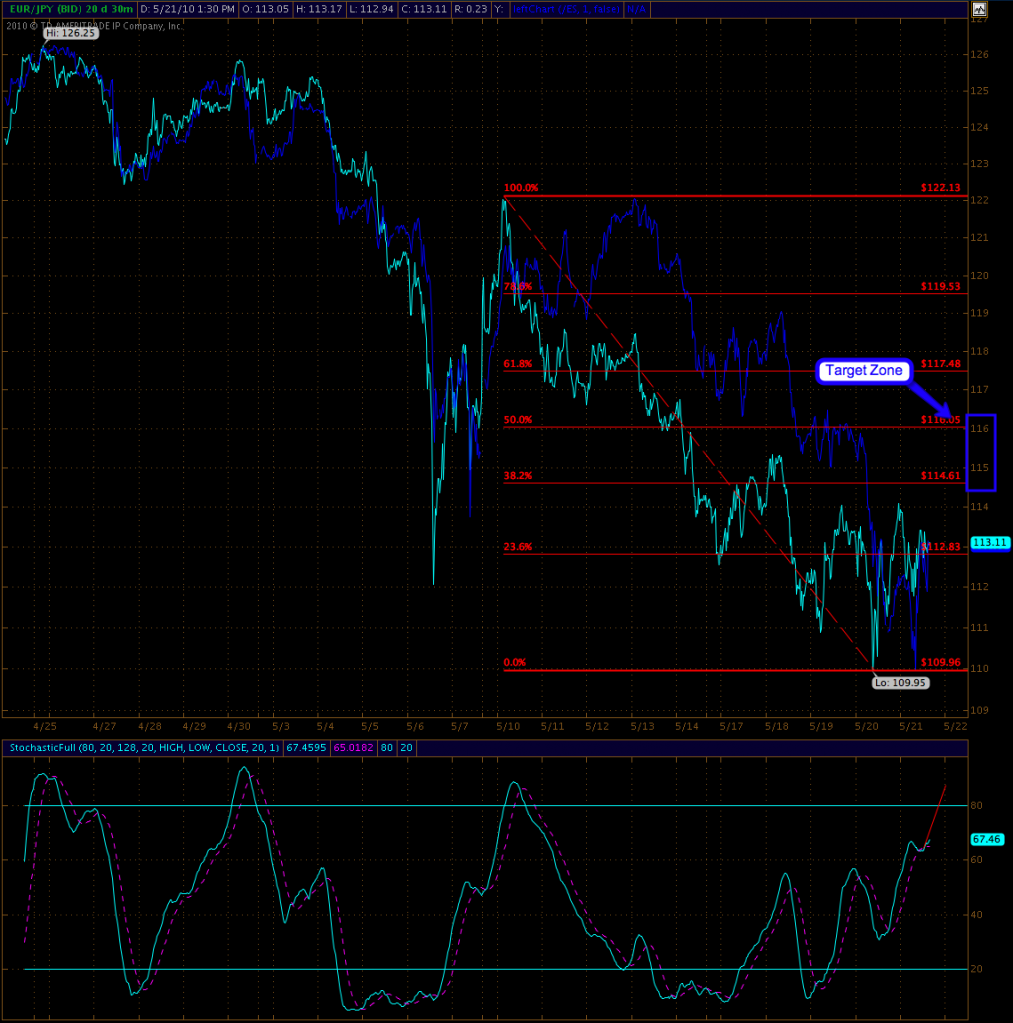 EUR/JPY also pushing higher – my target zone is between 115 – 116 – we got a bit more potential left on the stochastic. 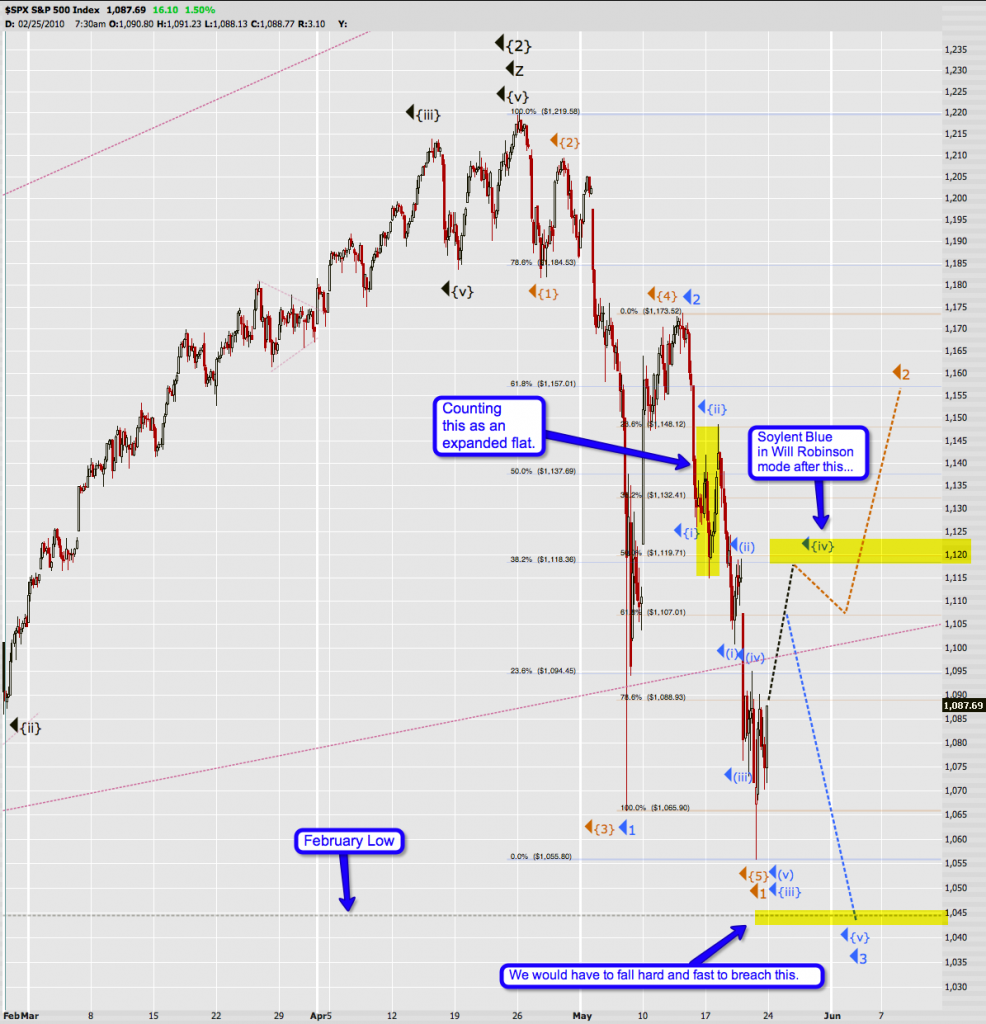 My wave counts both point up – either short or medium term. I think the chart is pretty clear and resistance/support lines have been highlighted. Yes, it’s possible we push lower here on Monday – I did not discount that and originally hoped that we would drop a lot further before a reversal. However, all my sentiment/momentum charts are now lining up with each other, so the odds for a continuous drop are lowered IMNSHO. A breach of the Friday lows would not disqualify Blue and Orange, simply we would have to expect a more extended third wave (as previously expected).

Bottom line: Monday and Tuesday will be instrumental in determining whether or not we completed Minor 1 of Intermediate (1) of Primary {3} on Friday or if we’ll see final leg down to 1045. That should however be the end of it as I have doubts that there is enough bearish momentum left to have the market fall off the plate at such an early stage. The Primary Zero also supports this notion as we painted some bullish candles on OPX Friday. Yes, that is often a crazy head fake day, which is why I am entertaining Soylent Blue in the first place. But my momo charts are telling me that we need buyers to return to the market and relieve some of the oversold conditions.