Compared with the tape of the past week the prospect of watching paint dry is starting to sound like a preferred option. As I like to be productive I however decided to ignore these mid summer gyrations and instead post some interesting weekly perspectives. The one and only daily chart I’ll show you today is that of the spoos as it’s painting a rising wedge – wave wankers may call it an ending diagonal. 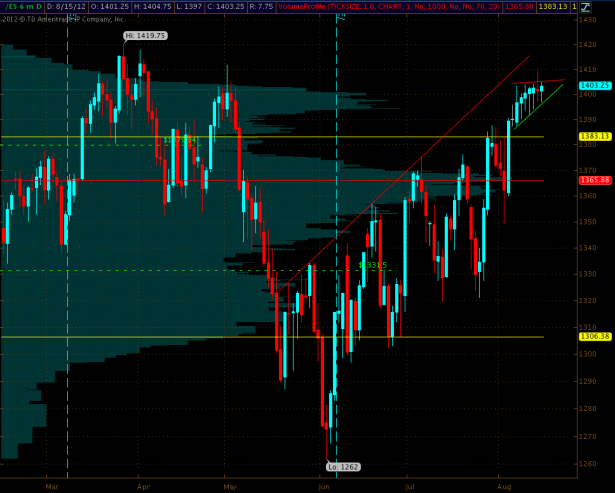 Obviously we are running into upside resistance here – which we expected courtesy of a deep chasm above 1410 on our E-Mini volume profile chart. Whether or not we squeeze a bit higher from here nobody really knows – and frankly I personally don’t care as the odds on the long side IMNSHO offer a pretty lousy risk to benefit ratio. 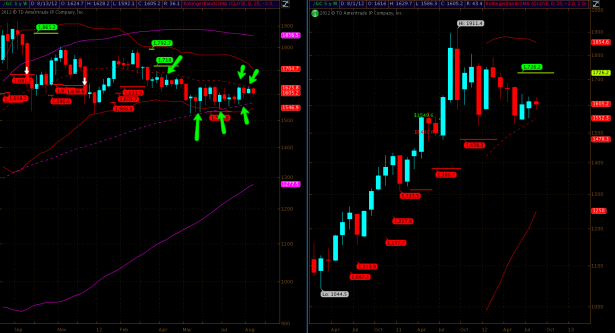 On to our weekly goodies. I showed you this gold chart recently and here it is again as it deserves repeating. Admittedly that sideways range we had to endure hasn’t been anyone’s friend. The upside I see is that we seem to be coiling up inside the 100-w and 25-w SMA. Which, if it keeps up, makes for some easy swing trading. Of course a breach of either may lead to a big release move – as both SMAs are converging that possibility now seems to be near. 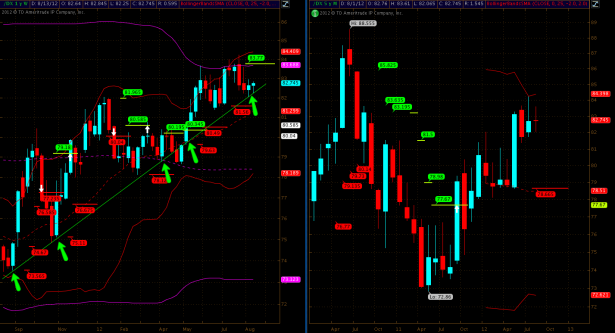 Compared with gold ole’ bucky has been quite a bit more directional but even it has recently started to run a bit out of steam. Maybe it’s all that summer heat – it’s near 40 degrees Celsius (i.e. 100+ Fahrenheit) here in Spain and on your side of the Atlantik most of the Midwest has been on a slow boil since late spring – I heard this has been the hottest summer on record. And of course global warming is a hoax – right…

Anyway before I relent to heat stroke let me remind you all that the DX continues to climb a diagonal support line which, with the exception of one breach in April, has been holding up famously. And even then we quickly touched the 100-w SMA and bounced right back. Now that is some TA I can work with. More immediate we are now pinned below a weekly NLBL – we’ll either breach that one in the next three weeks or finally drop below that diagonal support line. If that happens then it could get ugly for ole’ bucky (and for my exchange rate).

If you thought those two are interesting then you should see my crude chart – please step  into my air conditioned lair:
[amprotect=nonmember] More charts and non-biased commentary below for anyone donning a secret decoder ring. If you are interested in becoming a Gold member then don’t waste time and sign up here. And if you are a Zero or Geronimo subscriber it includes access to all Gold posts, so you actually get double the bang for your buck.
[/amprotect] [amprotect=1,13,9,12,5] 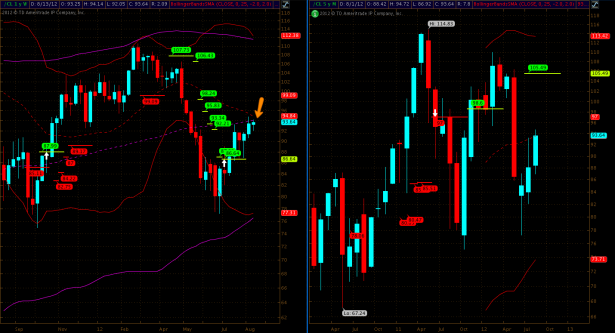 And here she is – the 25-w and 100-w SMAs are on a collision course and the weekly candle arrived just on time to be exposed to a double whammy of upside resistance. I think that this will be a very important test for crude – a push above 96 would establish solid long term support and most likely lead to triple digits on our chart – as well as many tears at the pump in Q4. Seasonally the odds for a breach are not bad and I would love to be there when it happens. 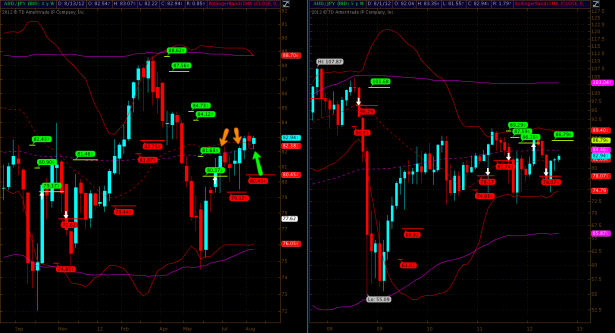 I found another pair of entangled weekly SMAs on the AUD/JPY. After attempting to push through resistance for weeks it finally succeeded earlier this month – since then we have been retesting support which is technically healthy. In particular as it’s been holding up nicely thus far. However, it’s time to get a move on and once we push into September I’d like to see this one heave itself above the magic 83 mark. A failure here this week or the next would probably lead us back to the previous NLSL near 80.5. 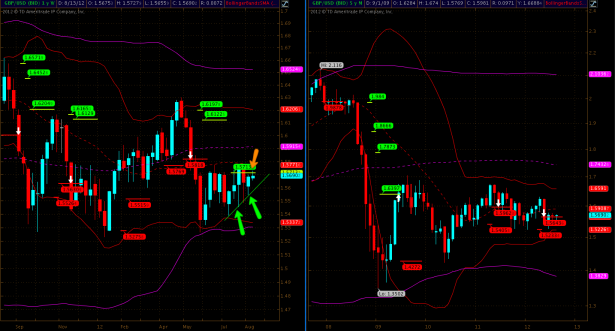 Finally here’s a true weekly delicacy from Britain – the GBP/USD which has been climbing diagonal support in the past few weeks. It’s also pinned right below a NLBL after which it’s facing its 25-w SMA followed by its 100-w SMA. I think a push above 1.58 would release a boat load of penned up energy, which may just be strong enough to propel us above both weekly SMAs. A failure here would be equally exciting and I’m keeping my eyes peeled for the conclusion of this pattern.