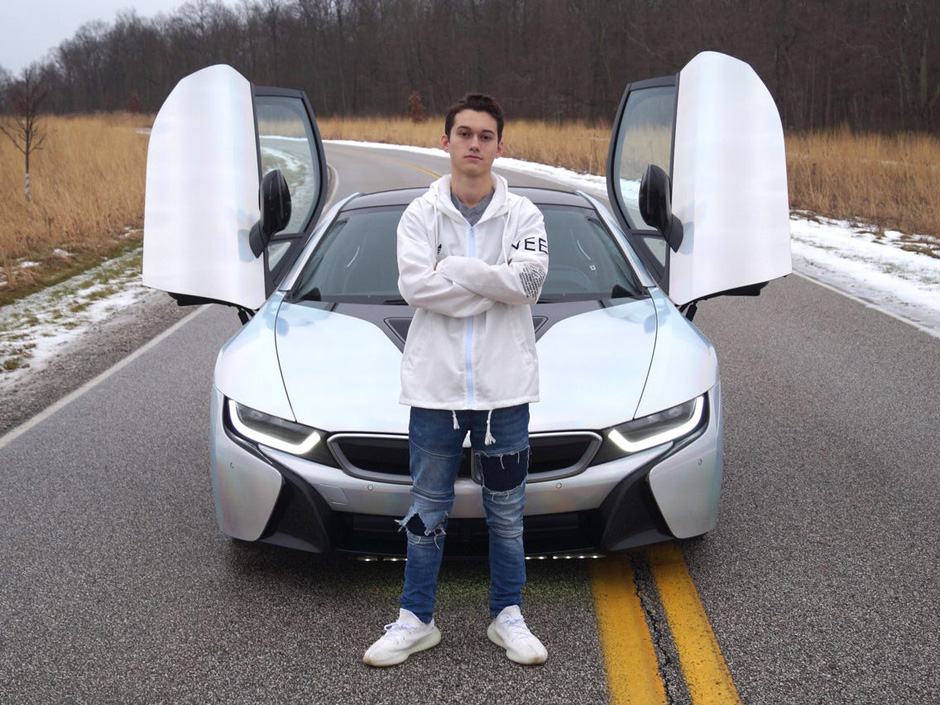 After almost a year of complete silence I guess I had to come out of the crypto closet at some point. Some of you may have been wondering why any self respecting market megalomaniac would continue to neglect the fastest growing financial sector bar none. Especially given that Bitcoin and Ethereum as well as the blockchain are starting to gain widespread acceptance. Even Paypal and Mastercard recently jumped on the bandwagon and whether you like it or not, at this point it’s fair to say that crypto is becoming mainstream.

And you probably know the answer: No I haven’t ignored it. In fact over the course of the past year I have been laboring almost every single weekend on a crypto related project in collaboration with Scott Phillips a.k.a. ‘Convict Scott’. You’ve met him already and so you know the man isn’t one to mince his words.

Monday’s post shed a bit of light of what we’ve been doing over the past year and why. The part of the story that’s missing is how we ended up developing quant tools aimed at trading crypto currencies in the first place. And the reason for that is very simple:

There nearly aren’t any , and the ones that are out there are fairly useless. Imagine trading stocks, bonds, futures, options, what have you –  just via moving averages, stochastics, or candle patterns. Or worse by watching MSBNC or some other mainstream outlet designed to lure hapless retail clients into the financial wood chipper.

You don’t have any sentiment measures, you don’t have any reliable economic of fiscal data, you don’t even have an active and regulated options market from which to glean what truly drives the daily gyrations. Which also means no implied volatility and no expected move. It’s the 1920s all over again! I don’t know about you but I don’t enjoy going to battle equipped with nothing but a loincloth. So something had to be done.

And that was the situation both Scott and I were facing in early 2020 after deciding that a) crypto was here to stay and b) that the era of HODL would eventually come to an end, to be replaced by more traditional market dynamics. With only 2.5 Million coins left to be mined that day will probably come sometime this decade. Until then it’s Westworld on steroids. 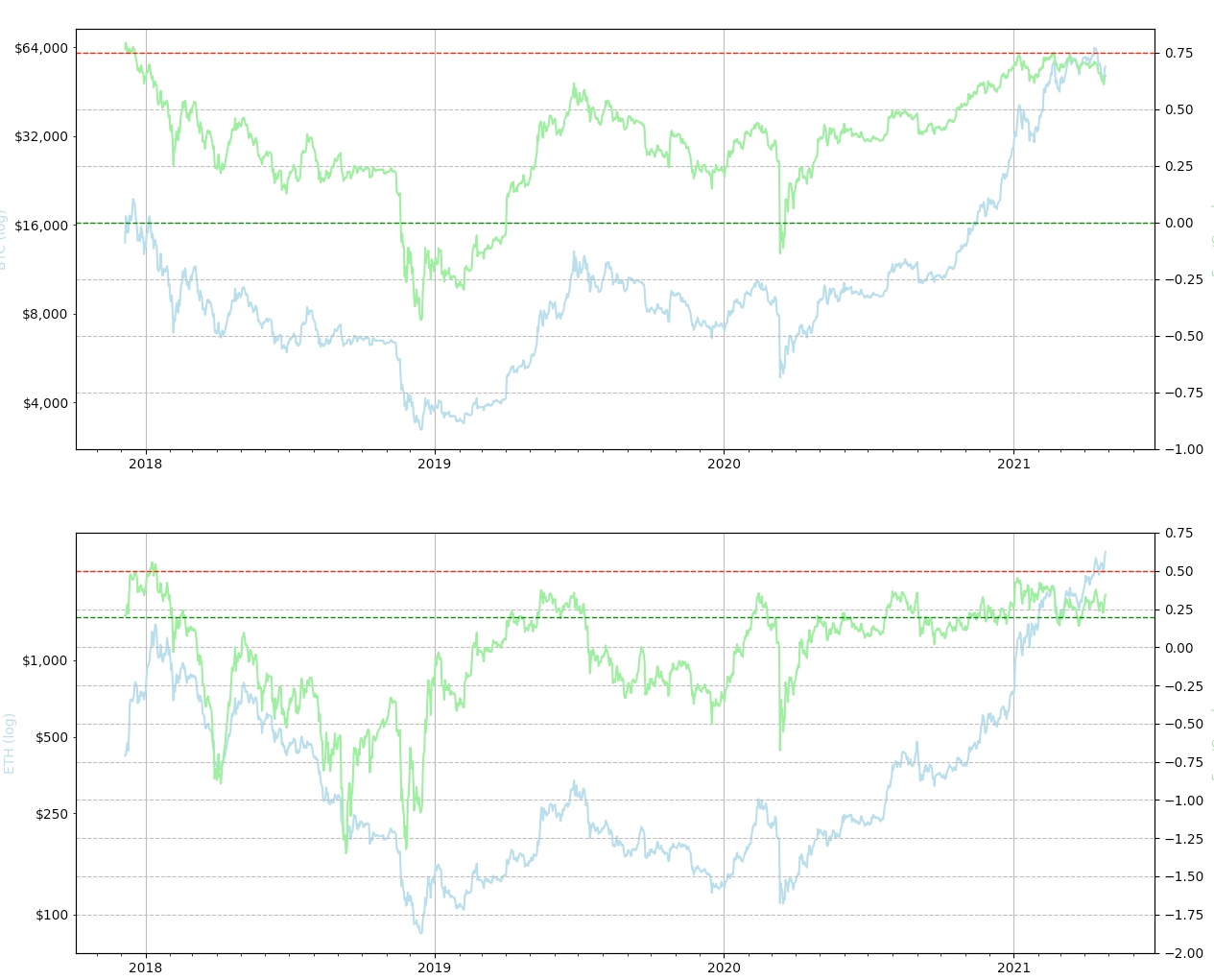 Clearly the day will come when we’ll have the equivalent of a VIX for Bitcoin and various other momentum or sentiment measures for the growing number of altcoins out there. One day there will a large regulated options market. Which will be awesome if you are the type of person who for whatever mysterious reason does not enjoy losing 50% of your assets in a single week.

It was clear to me from the beginning that something equivalent to a VIX for Bitcoin was hidden somewhere deep inside the blockchain. As you can imagine this was not a trivial undertaking as getting access to the data and disseminating it proved to be very challenging. Both Scott and I looked at numerous blockchain related meta data and slowly a handful of winners emerged that proved to be most promising.

In terms of criteria for developing alpha factors for crypto we knew right away that attempting to call short term swings, like the one we just experienced, would be futile. Simply speaking even Bitcoin is way too volatile for that, let alone all those crapcoins that may be en vogue this week, so our base criteria was very simple:

And that’s it. What we’ve come up with is shown above which may seem innocuous to you but by using the thresholds painted in red/green we’ve been able to pin every major bitcoin and ethereum top/bottom over the past five years. And by major I don’t mean a 10% drop but a 30% plus wipeout. 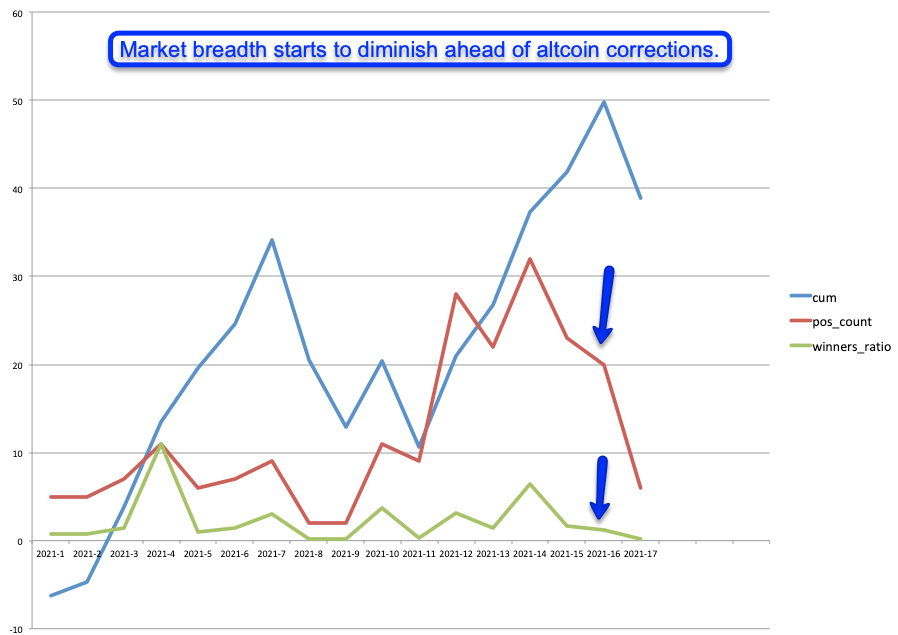 Of course I’m also working on altcoin related alpha factors as altcoin season can be extremely profitable. At least it has been for both Scott and myself as we took a $70k account and basket traded it all the way up to slightly under $1Million. In only four months. Yup, we did that and we have the account to prove it. YOLO baby!

I’m a pretty experienced trader but I have to admit that repeating that type of performance would be very difficult if not impossible in stocks or even options. So whether or not you like crypto or believe in its future at this point becomes completely negligible.

What matters is that I have seen an increasing number of pimply faced z-geners discuss their early retirement plans in various crypto related forums. Sure beats a lifetime of working for ‘the man’ and getting pushed from one dead-end job into the next.

Will the Wild West times in crypto end at some point? I absolutely believe so but I do think we have a few more good years ahead of us. What you do with those years is of course your choice but as you can imagine I’m not planning on missing out on the biggest asset explosion in our lifetimes.

Over the course of the next weeks I plan to host a series of webinars designed to bring you stragglers into the fold. But even if you’re an experienced crypto trader you may still learn a thing or two, so stay tuned.