Rather interesting session today. We got that little short squeeze I was proposing on Sunday as well as on Monday when Mr. VIX was strongly suggesting that the woodshed was going to be booked out all through OPEX week. 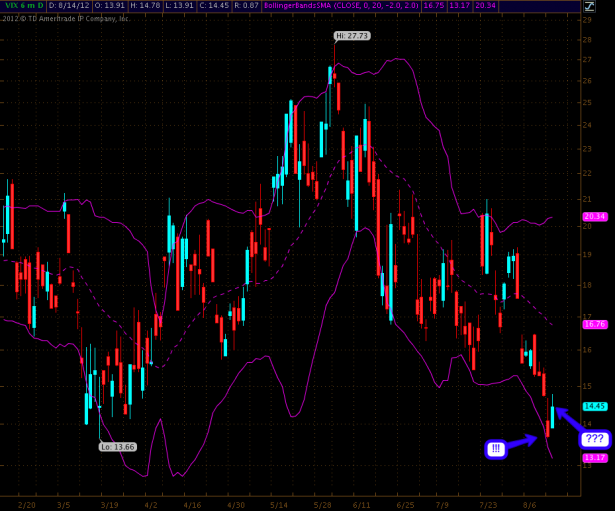 So, let me get this right – yesterday we were trending down (before the final EOD safe) while the VIX was dropping below 14. And today the spoos are actually are trading higher than yesterday but VIX has pushed up below the 15 mark. Right… 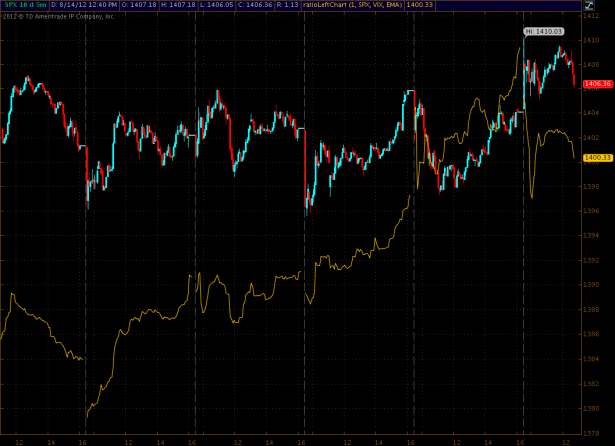 Today I’m seeing the inverse pattern on the VIX:SPX ratio – while the SPX gapped the open the ratio dropped hard, indicating that VIX opened higher as well. Most fascinating. Hey, it’s not that I didn’t warn you guys. 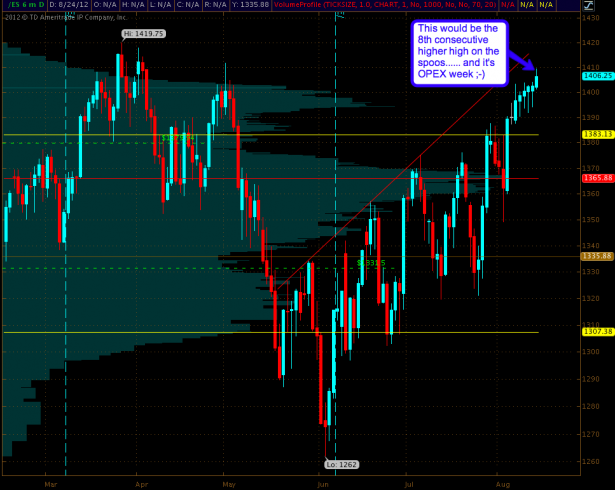 Meanwhile over at Evil Santa’s workshop I am counting eight consecutive higher highs on the spoos. Not on the SPX – that one had a down day yesterday – remember while the VIX was pushing into record lows again. I looked up the probability of the E-Mini ratcheting up a ninth day and it’s about 0.8%. Hey, not impossible but if you want to be long here then I wish you the very best – actually I don’t as you would have to f…ing stupid. 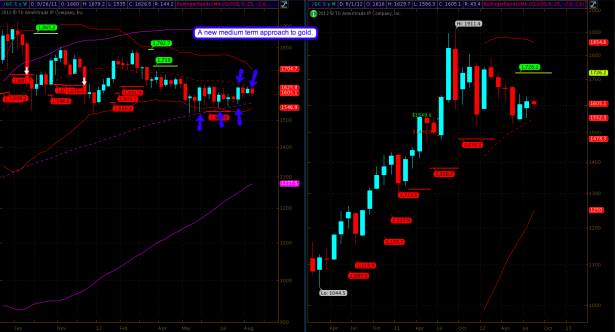 Here’s a freebie I thought everyone deserves after gold has once again shown us the big finger. RBW sent me a few long term gold charts and his actually uses the 25-week SMA just like me. In addition I also use the 100-week as most of you subs know, and it seems to me that gold is locked between those two on a medium term basis. So until we get a break out and as long as we stay in this sideways formation from hell it may just be wise to use the 100-week and 25-week SMAs for a bit of swing trading. FWIW – I think there are easier ways to bank coin as the ATR on this is has gone to hell in a hand basket.

Alright, I have surprisingly much to share today – in particular the FX side is looking rather tantalizing. Please join me in my air conditioned lair:
[amprotect=nonmember]
More charts and non-biased commentary below for anyone donning a secret decoder ring. If you are interested in becoming a Gold member then don’t waste time and sign up here. And if you are a Zero or Geronimo subscriber it includes access to all Gold posts, so you actually get double the bang for your buck.
[/amprotect]
[amprotect=1,13,9,12,5] 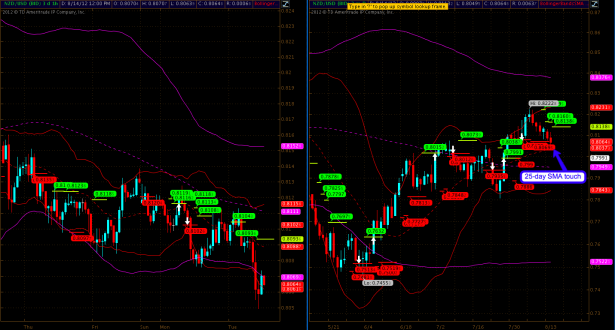 Alright, let’s get this show on the road. We have a 25-day SMA touch on the NZD/USD, which I plan to use as a long opportunity. A breach of the SMA leads us lower so I am prepared to flip my position if stopped out. 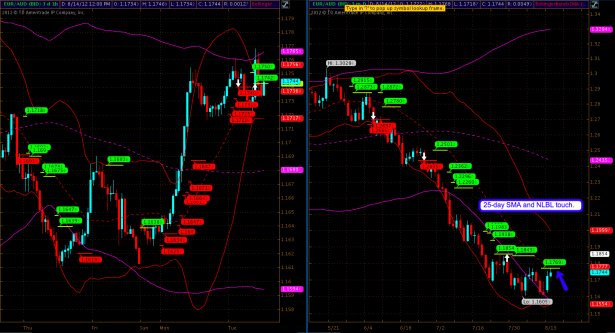 EUR/AUD is once again testing a NLBL – so far every attempt has been failed in the past few months. And that means the Mole is short hoping for an encore. If it finally breaches then it would also push above the 25-day SMA – and that would be a rather strong argument to join the long side. 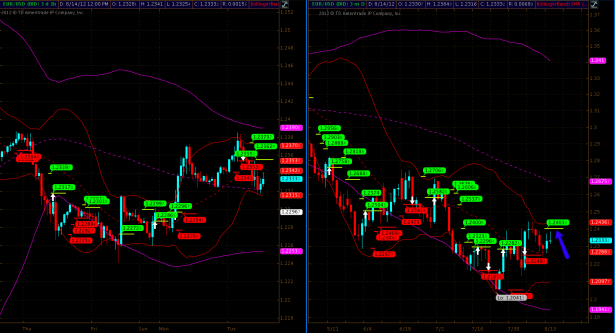 Now here is where it is getting interesting – the EUR/USD is also testing its NLBL – same idea here although it’s less weak then the EUR/AUD. 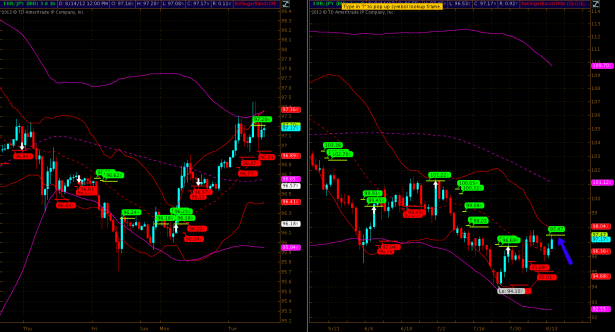 EUR/JPY – same setup as on the EUR/USD – NLBL test. I am short all three BUT I am secretly hoping to get an opportunity to take long trades here as I see a lot more profit potential. So I’ll be keeping my eyes on these guys. 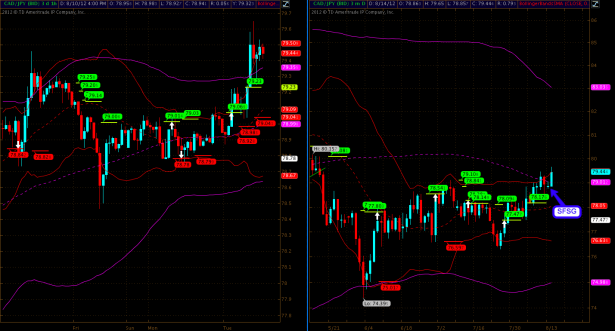 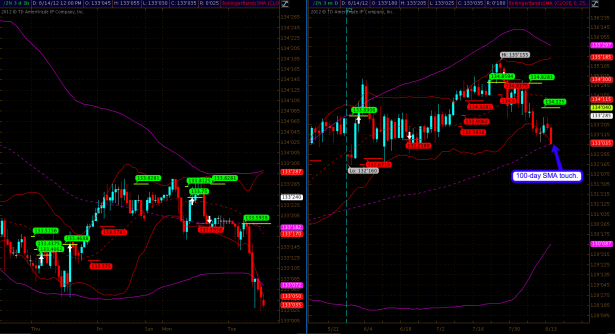 On the futures side we have ZN (10-year treasury futures) right on the Maginot Line. I am long here with a TINY position as I suspect we may get a little stab lower first. Even if this initial entry fails then it’s worthwhile revisiting, assuming we get some sideways action. Odds are reasonable for that to happen. 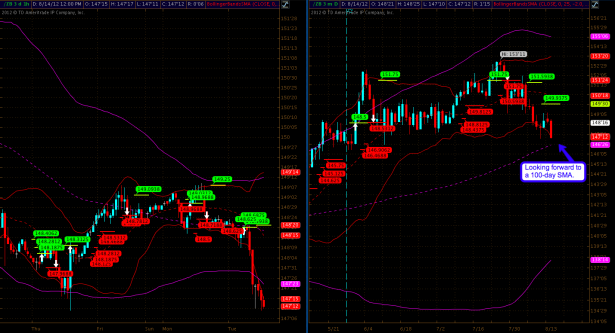 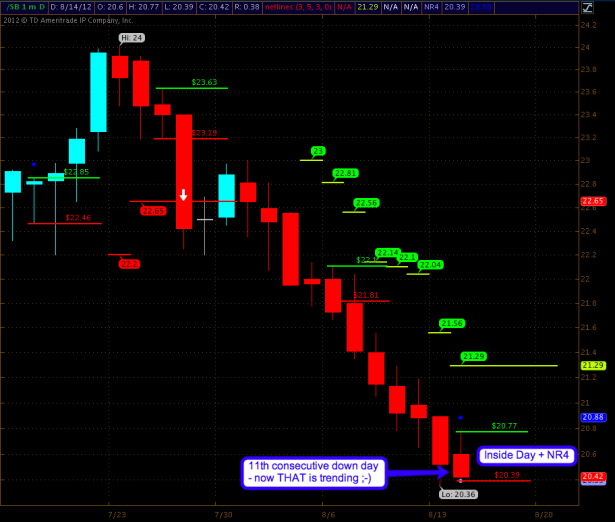 There was a great inside day setup on sugar but it just got ruined by a 1-tick drop below yesterday’s low. At any rate – it’s been closing lower (and has not breached above the previous day’s high) for 11 days. Now – THAT is what I call trending! 😉