You could also call it Whac-A-Molecool – at least that’s how it felt right after coming back from lunch today. Let’s not fool ourselves – despite the tall tales from some traders I won’t mention here, this continues to be an extremely difficult market to trade in. We are shifting from one market sector du jour to the next and unless you’re a stone-cold trigger happy day trader, it’s tough to hang on to profits long enough to actually bank anything. Today, after revocation of the naked short sale rule the financials had their expected day in the bloody dungeon, although we saw some easing up late in the afternoon. Energy and basic materials were back en vogue encouraged by modestly rising crude prices. 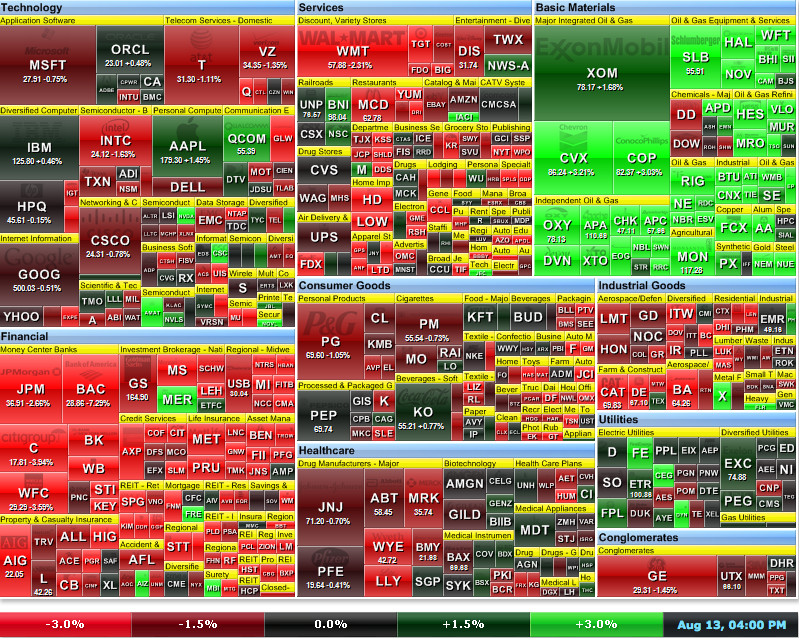 The usual circus we have come to enjoy in the last few weeks – out with the old – in with the new. No trend over three days in sight by a longshot, with the notable exception of precious metals, which completed its scheduled thrashing this week. If you had the foresight to take my advice a month ago and shorted either Gold or Silver around 960 you’ve had a fantastic run. Congrats – now cash out and take that money to the bank – you’ll need it for what I now will coin D-Day. Yes, you’ve heard it here first. I still like ‘the Abyss’ as our final destination but for now we remain in eager anticipation of the ‘Allied Bears’ to make landfall and overrun the ‘Permabulls’ triangle shaped defenses. More about this further below.

Alright, today I decided to go ‘Tim Knight’ on you guys – which means tons of charts which will make your browser whince and your chart reading skills switch into overdrive. For starters let’s look at my personal favorite theme, the S&P futures: 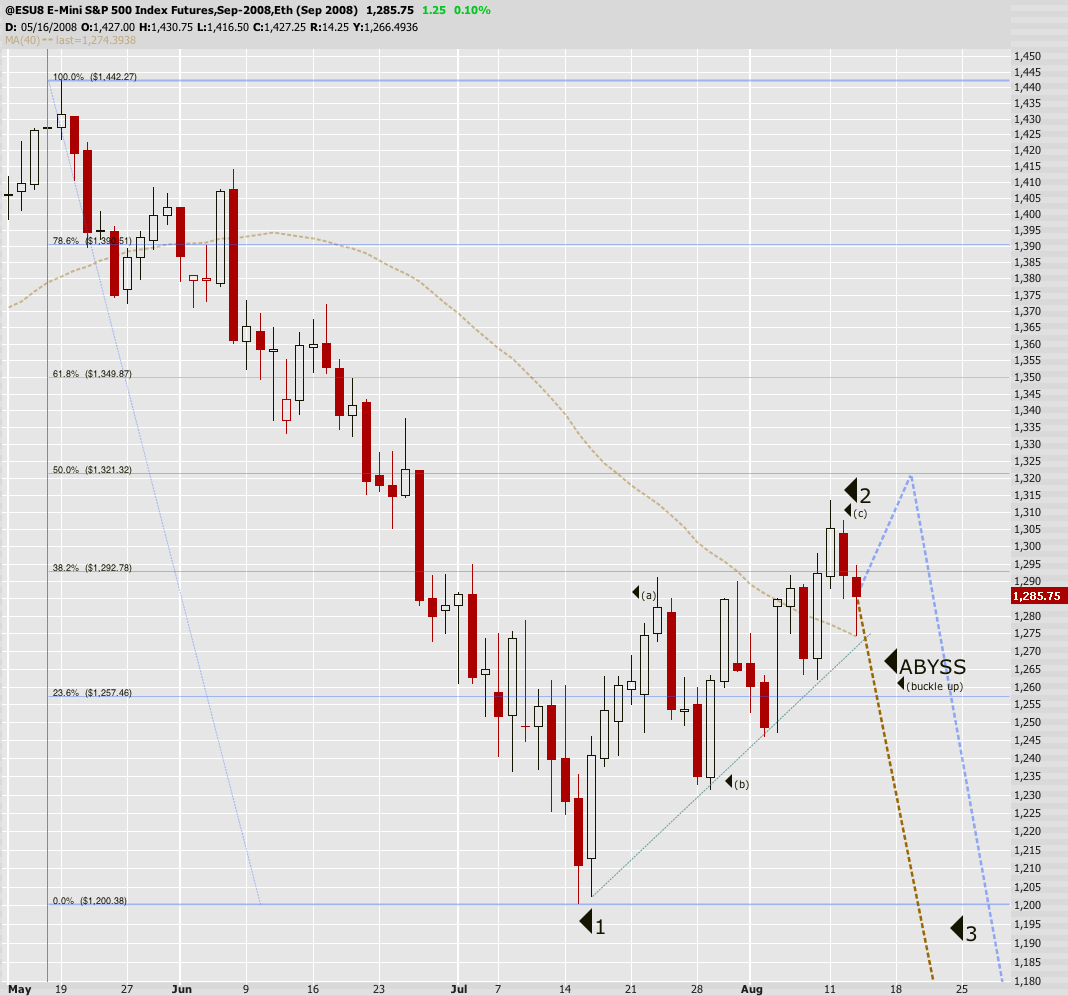 As I eluded to two days ago (and as Berk explained so brilliantly yesterday), breadth (advances/declines) continues to keep lagging as well as up/down volume continues to decline – both indicating that this rally is running out of steam internally. I’m split on whether we’ll see the S&P drop tomorrow, there is a chance we might retest the 1320 zone once more. As mentioned previously, a strong indicator that wave 2 has topped will be in the form of the lower triangle support line being breached with confidence.

Since this market continues to be fractured I thought it necessary to show similar charts and possible trajectories for two more averages. 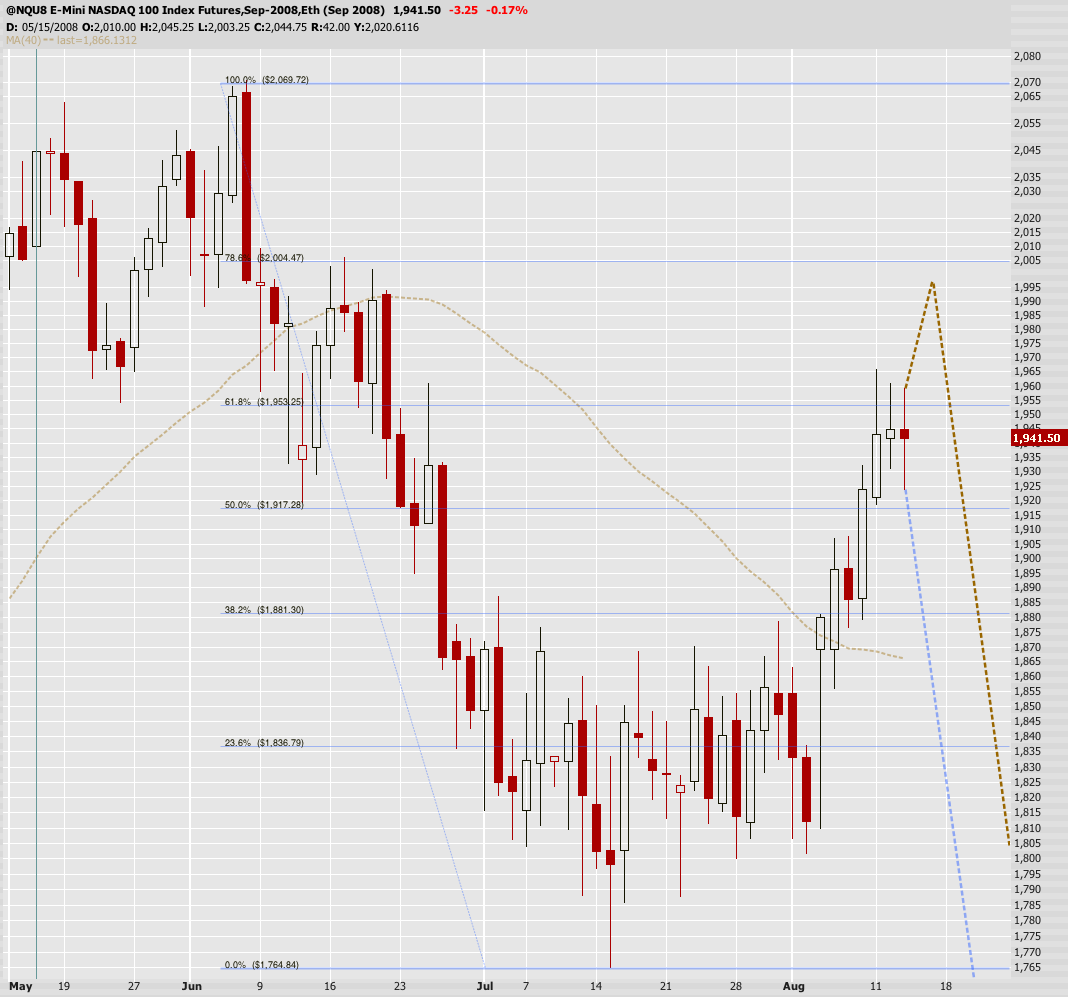 The Nasdaq futures have obviously been leading this market and have shown remarkable strength and resilience. I actually expect to see continued strength here for the remainder of the week and a push towards the 1995 -2005 zone is possible. The target for the Composite is 2469-2483 and 1982-1992 in the 100 index. If we happen to break today’s 2404 low, that would be great news for a bearish scenario. 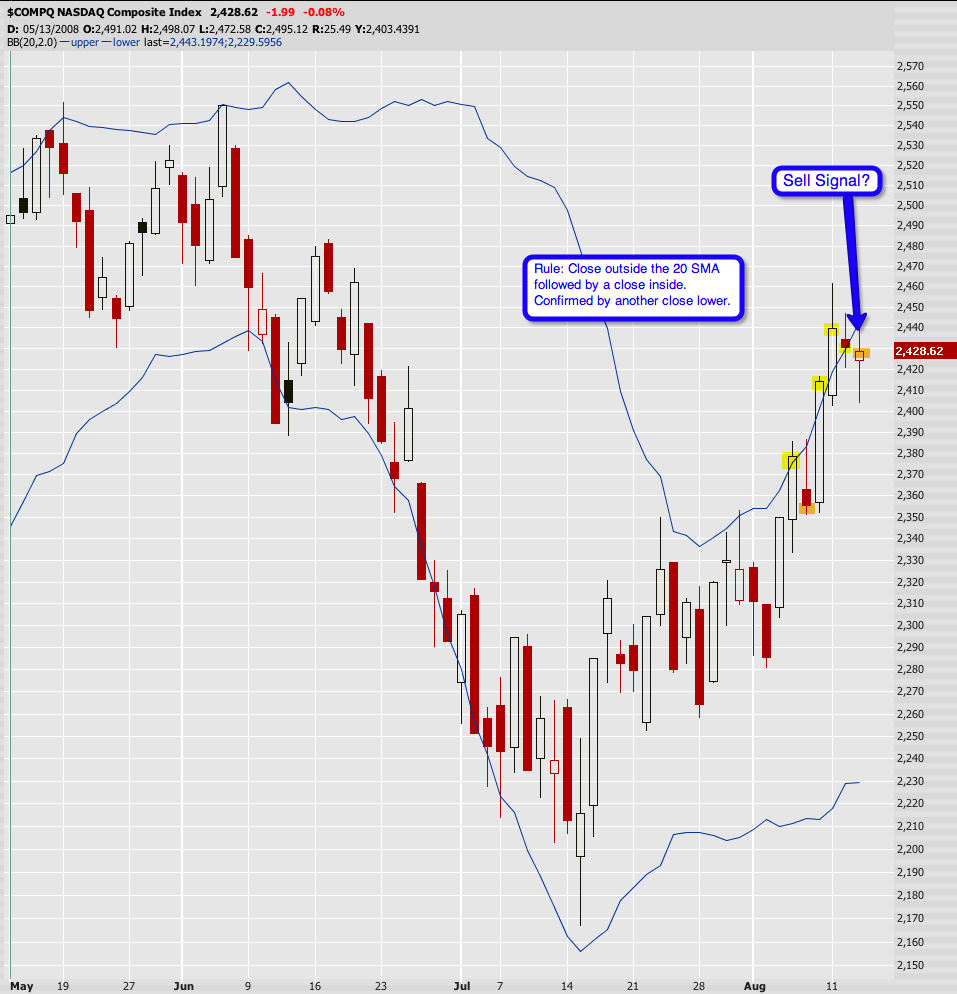 Sell Signal on the Composite?

While we’re talking about the Nasdaq, let me explain the COMPQ chart above. My evil genius-in-crime Berk mentioned this yesterday:

“Another interesting clue is the action around the bollinger bands. Indexes seldom push far outside of the 2.0 Bollinger band, however almost every market reversal is accompanied by a spike of that level.”

Exactly right, and we just happened to close inside the Bollinger today, which very often signals a sell signal. Are they always on the money and would I bet my first born on it? No, but only because I lost the damn kid last week in card game already. Hey, three years of coal mining in South-East China can’t be that tough, can it?

Moving on to the Dow futures: 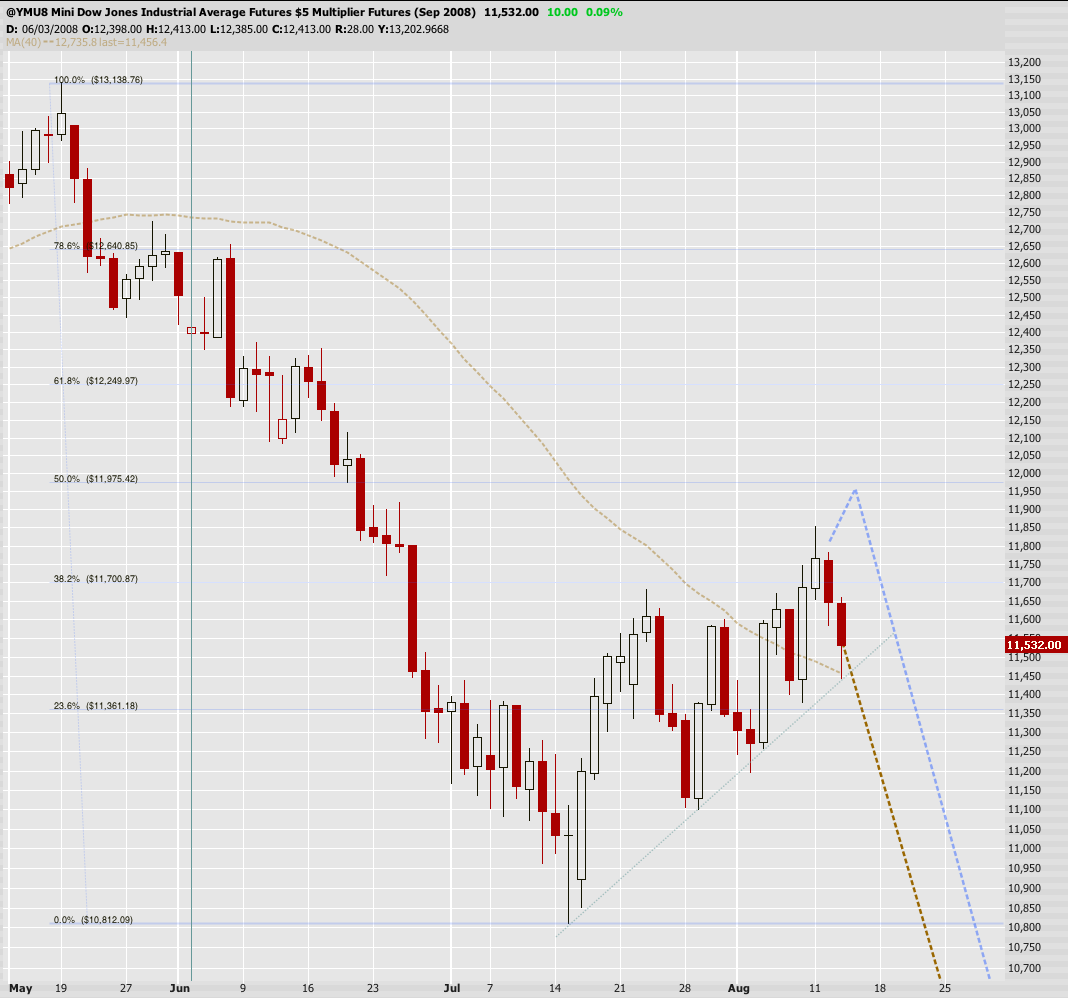 Dow ready to roll over.

Being the evil speculator that I am, I greatly enjoyed the weakness in the Dow today. It touched the lower triangle line raising my hopes of a push through, but then was brisk to burst that bubble by retracing back about 40%. It seems that this lower support line is being taken seriously by the market and it might continue to test our patience for a few more days. We shall see – I am showing the two scenarios that have the highest probability as of now. 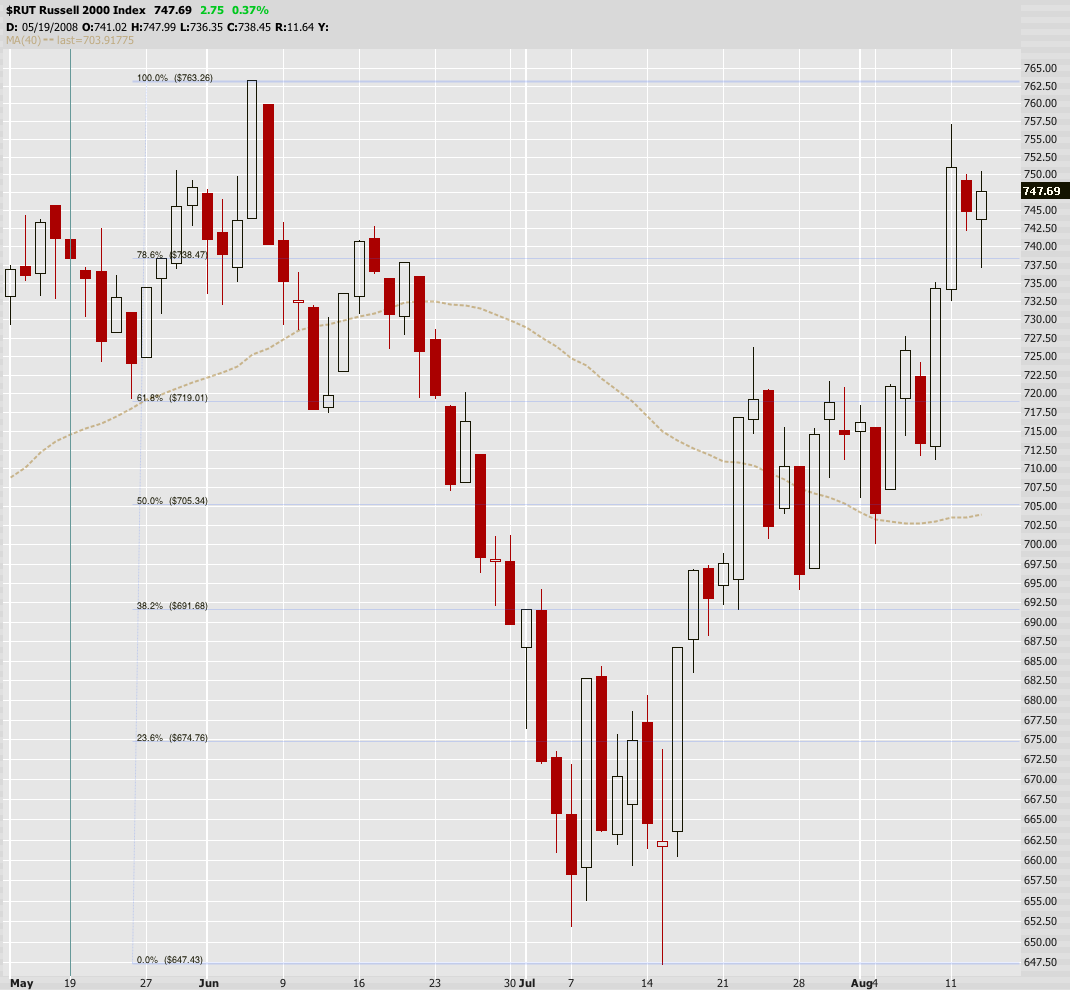 What’s really making me nervous is the strength in the small caps. Quite frankly, we can’t have much more of this, as we are close to our early June peak. I choose to view this scenario as a great entry point for bears with large cohones – Tim Knight seemingly being a man equipped with canon ball size specimen. 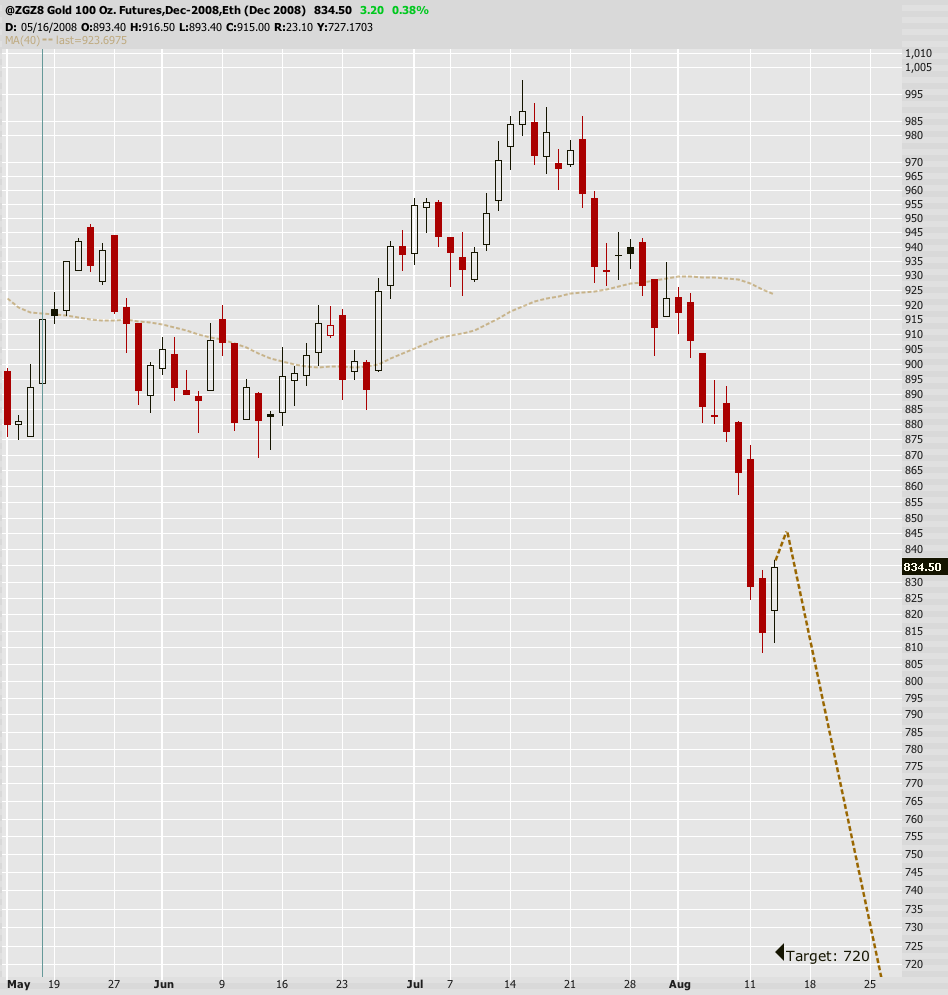 Gold getting ready for another spanking.

If you have stuck it out all the way to here, I’m throwing in a free towel and the chart above. Yes, Gold is going to tank even further – have no fear. If you were foolish enough to ignore my ‘short gold now’ signal from about a month ago, here is your chance to redeem yourself. I expect the (now less) precious metal to make a brave push up to around the 850 area in a desperate attempt to regain former glory, but then start tanking from there. Next stop somewhere around 720 – yes, you heard me right. Actually in the longer term I expect Gold to traverse all the way back down to 600, but that’s a story for another day.

My plan for the next two days: Staying in cash! Not only are we in a whipsaw market, but we are also in the final two days of expiration week. Not much is going to transpire from here (I know I’m going to regret having said that). If gold marks my entry, I’ll pick up a few contracts for sure, otherwise I’m officially on a high protein/low option diet.