What Goes Straight Up 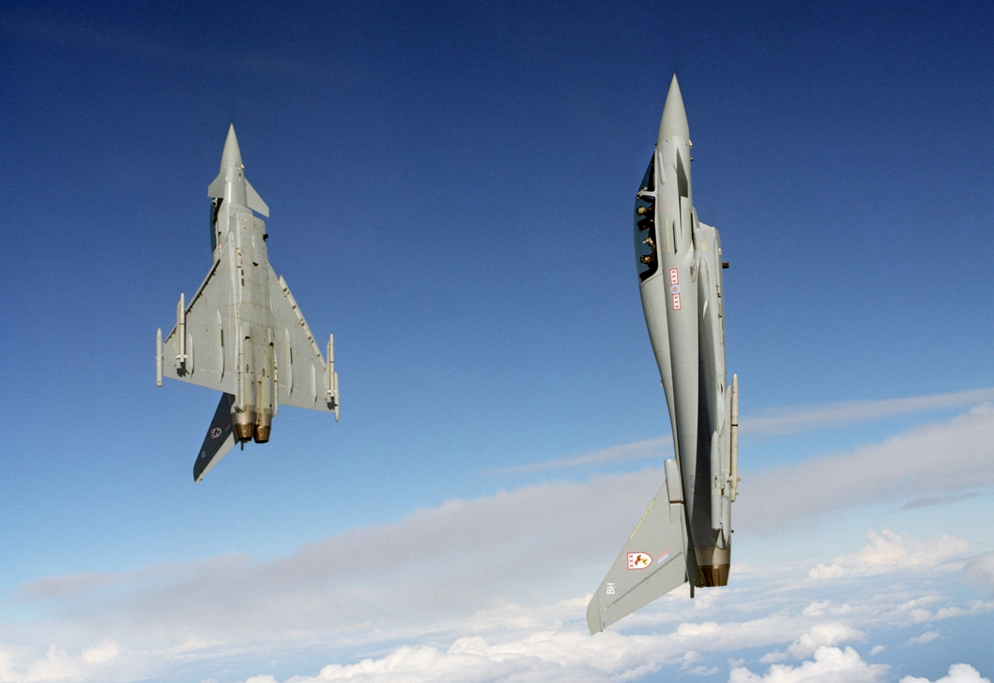 What goes [straight] up must eventually go down. However when exactly a symbol which has turned exponential runs out of fuel is the more important question. Once emotions reign high all bets are off – or in this case all bids are on. You may recall that I was pointing at gold the other day and suggesting that we may see another wild push to the upside. 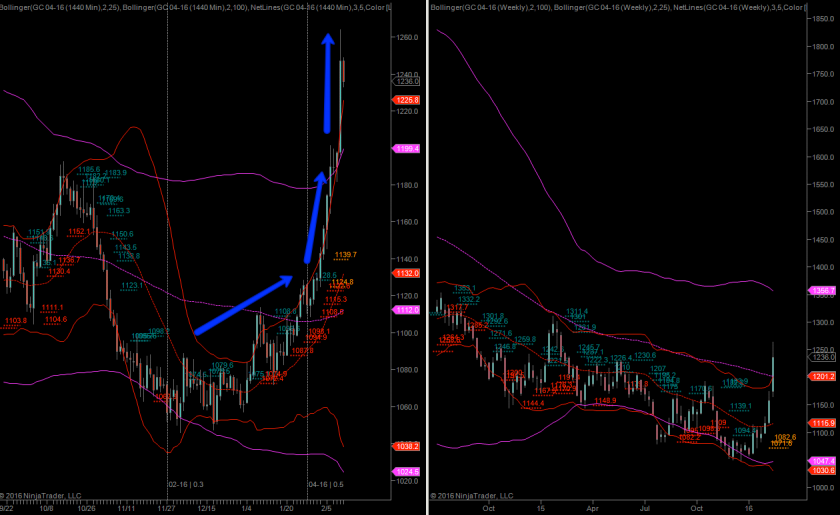 Which is exactly what we got and I’m pretty glad I got out of my short position at break/even. We are now seeing an obligatory pullback but medium term this thing may have legs. 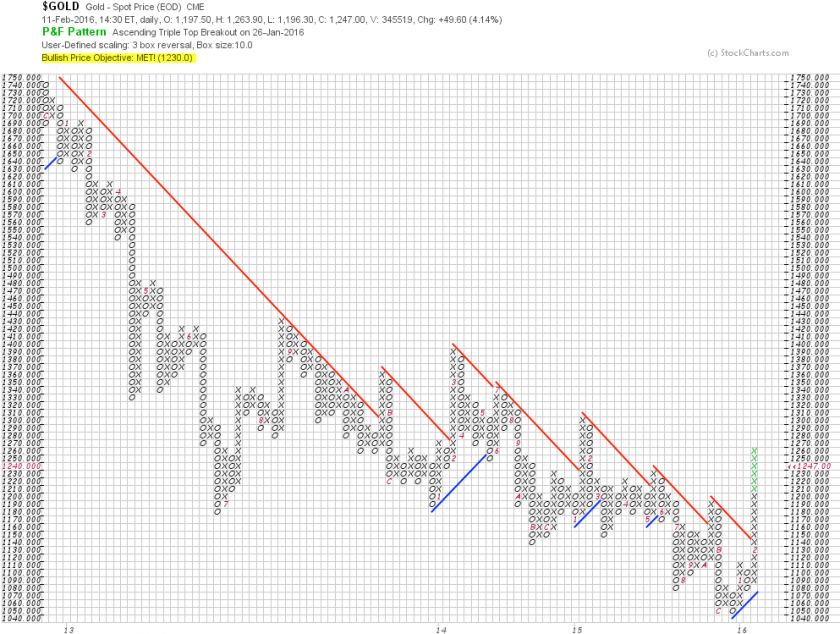 Just FYI – the P&F claims that we met the bullish price objective. However I wouldn’t really think bearish here until we pull back below 1160 and trigger a long pole reversal warning. 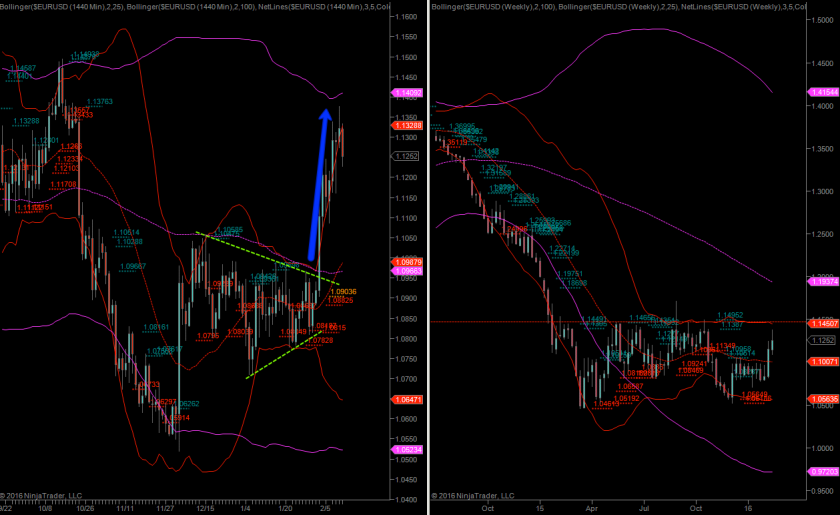 The Euro jumped from 0 to 60 in one session and it’s been one nasty short squeeze ever since. I told you guys this one was coiling up but catching this entry was almost impossible unless you managed to grab it near the lower diagonal at 1.08. Show of hands – who nailed that entry? Exactly 😉 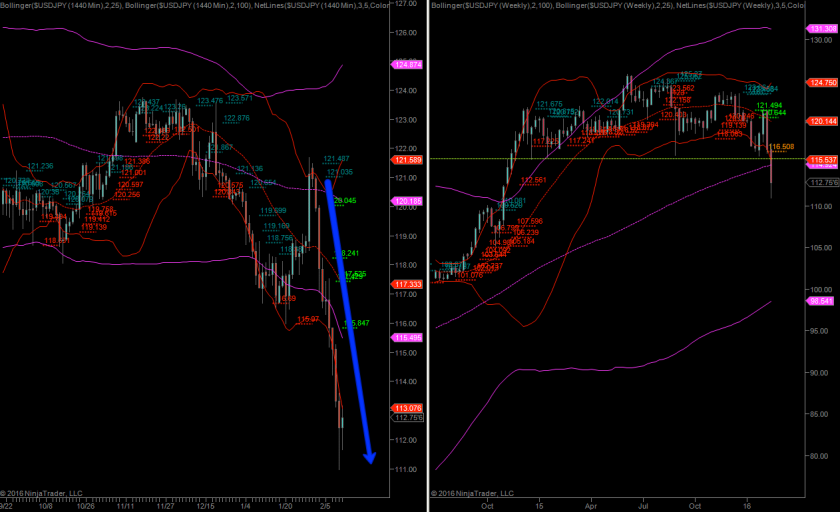 USD/JPY traders on the other hand should be turning on their sonar – we sliced through that 100-week SMA like butter and that 1.15 mark I pointed out a week ago is now history. Bank of Japan Governor Haruhiko Kuroda’s decision to adopt negative interest rates clearly has failed to rein in the Yen’s advance. This could get ugly in a heartbeat folks – that chart shows nothing but air below. 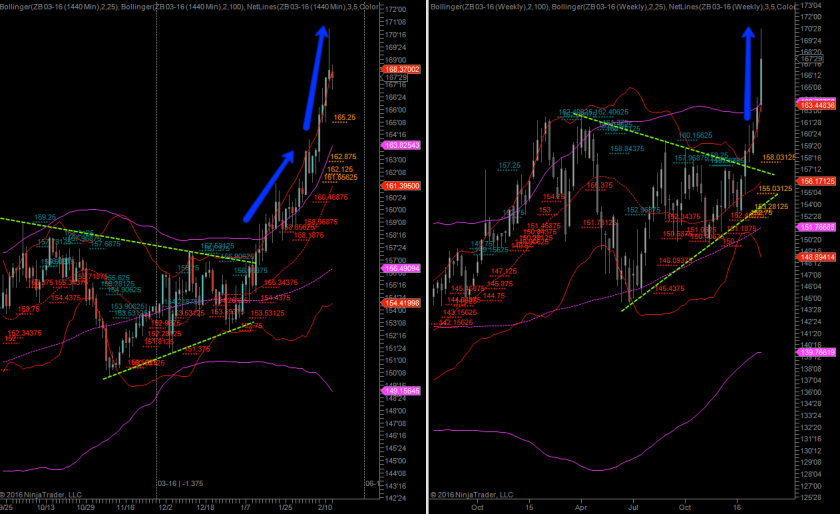 Bonds of course have continued their rampage higher and now seem to be taking a little breather after the trajectory looked like it may flip backward (just kidding). Scalpers may have some fun here today and early next week but I would be cautious about betting against this advance.

Equal caution I would recommend on the equities side despite signs of a short term bounce. The P&F continues to point toward 1730 and that won’t change unless we pop above the 1800 mark. 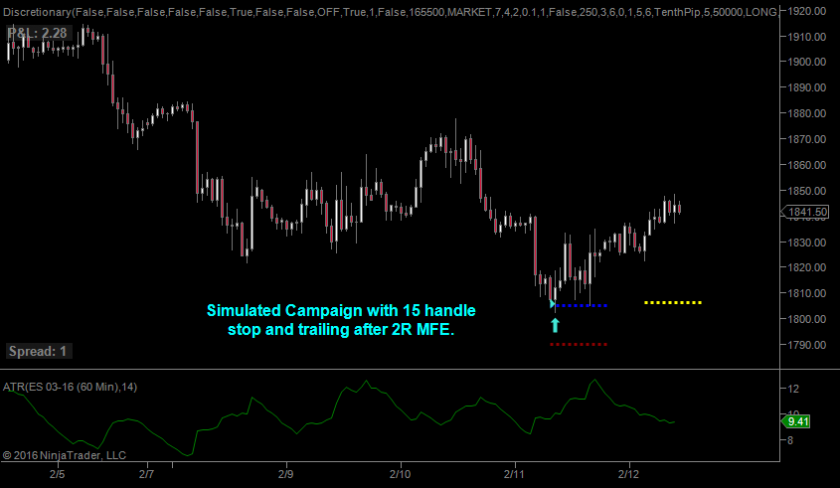 I managed to nail an almost perfect long entry yesterday which was followed by an even more perfect stop out at break/even at 2005. 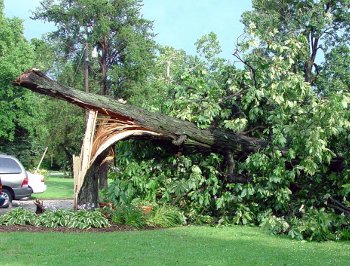 This is a tree nearby my house after I was done kicking it this morning – emergency crews are currently working to clear the road and to free trapped vehicles. Now seriously I would lie if I said I wasn’t a bit miffed about this but apparently I need to kick my campaign management up a notch into extra conservative mode. What I’m currently running (as a simulation) is a 15R handle stop with trailing suspended until an MFE of 2R. Let’s see how far that one will last. By the way the hourly ATR(14) was 12! So ATR plus seems to be the proper formula here.

I still see no setups I like right now – most charts are either completing large moves or are stuck in limbo mode. Best to keep our powder dry for when the tape is offering better entry opportunities. Don’t get sucked into chasing big candles or worse – revenge trades in order to compensate for surprise losses. Just because you lost your ass on gold or in the spoos doesn’t mean you need to make it back in exactly those symbols. This is actually a cognitive bias I haven’t seen covered out there so perhaps that should be my next topic in that category. 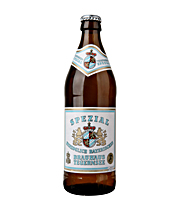 By the way I’ve decided to stock up on my stash of teutonic wheat beers as I expect Germany to officially convert into a caliphate by the end of this year. Which would mean all beer production will have to be halal and non-alcoholic. Alright that’s it – I’m heading back to the tree…