Why The Dollar is Dropping

Things are about to get interesting – in particular when it comes to the Dollar. If you take a look at the Dollar index today you’ll see a sudden drop: 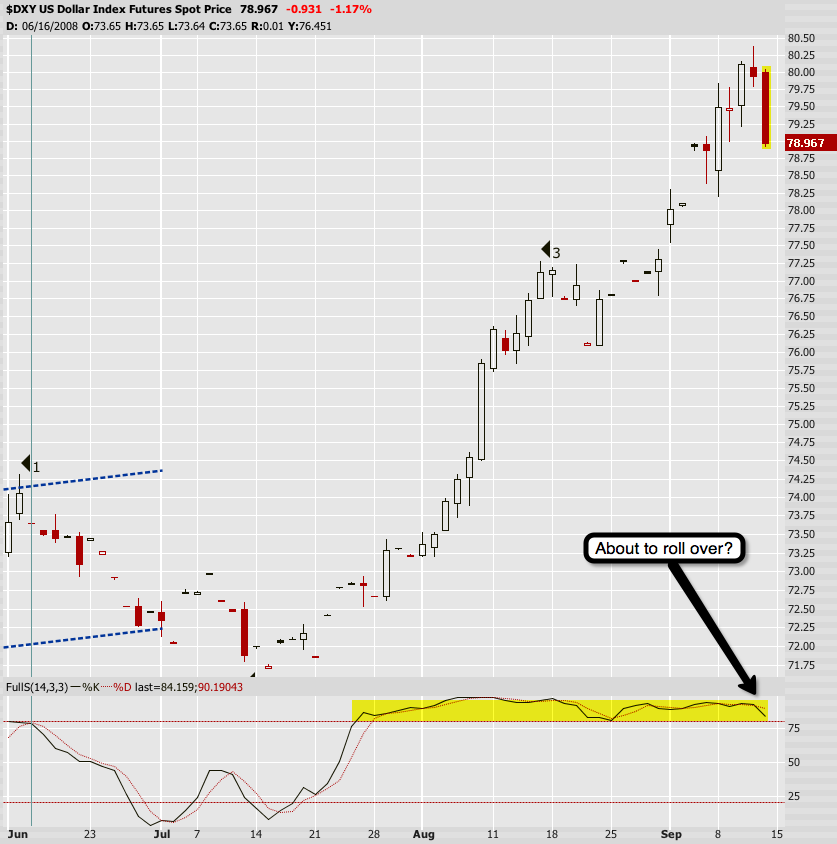 Dollar dropping hard for the first time in 8 weeks.

So, what’s going on? Well, we expected the 80 range to be the Dollar’s interim top for a while now, as the wave count requires a long needed consolidation in the pattern. However, I have been pretty verbose about my position that the Dollar has been manipulated by the ECB, the Swiss Bank, the BOC, etc – and the question is why are we dropping now?

Bloomberg is giving us the usual spin (btw, I love Bloomberg but they just relay the info they get themselves):

Dollar Falls Most Versus Euro Since 2006 on Pared Haven Demand

Sept. 12 (Bloomberg) — The dollar fell the most against the euro since January 2006, pushing it down from a one-year high, on reduced demand for the greenback as a haven.

Duh – but why is there suddenly reduced demand? What’s really going on? Well, first up you need to understand that FOREX traders are among the best traders out there – they don’t get emotional and they know how to play the game. If we small players were up against equity traders of that caliber we’d be toast within a week. So, for them to start dumping the Dollar right now happens for a reason.

Leave it up to Mole to connect the dots – although I had to go all the way to China to get it:

China, which holds a fifth of its currency reserves in Fannie Mae and Freddie Mac debt, may cut the portion held in US dollars, according to China International Capital Corp (CICC), one of the nation’s biggest investment banks.

The US government this week seized control of the two mortgage-finance companies, which account for almost half of the home-loan market in the world’s biggest economy, to prevent defaults from crippling them. China holds up to $400 billion in the two firms’ debt, CICC Chief Economist Ha Jiming said in a report Thursday.

“The crisis has made Chinese officials realize it’s a bad idea to put all their eggs in one basket,” wrote Hong Kong-based Ha. “This will likely lead to greater diversification of foreign exchange reserve investments.”

Now let’s correlate this with another piece of news I saw today which incidentally disappeared within 15 minutes, this time again on Bloomberg:

Paulson Adamant No Money for Lehman, Fed Against It (Update1)

A person familiar with Paulson’s thinking said Wall Street has been aware of Lehman’s troubles for a long time and had time to prepare for any crisis at the company. The access Lehman has to loans from the central bank will allow an orderly process, the person said. Fed officials are aligned with the Treasury and have a strong predisposition against use of government money.

So, now we know what’s really going on. It’s not that the PPT suddenly has seen the light. The Chinese are threatening to finally pull the plug if their considerable Dollar holdings should be exposed to further inflationary action by the Feds. That would be a BAD thing – trust me. If that happens you can kiss the Dollar good-bye. And we already know from the FNM/FRE debacle that the Feds have no compunction about handing U.S. equity holders the shaft whilst protecting the interests of foreign debt holders like the Chinese, the Russians, the Japanese, etc.

THAT is why LEH won’t be handed to GS or BAC on a silver platter paired with a juicy Fed cash injection or some kind of creative asset swap for treasuries: The Chinese had enough and are threatening to start dumping Dollar assets if the Feds continue to running their printing presses whilst bailing out every investment bank in trouble (which is most of them). The market has been ‘pricing in’ bank failures at this point (just look at the last few days of market tape) and the Feds are now forced to draw a line in the sand. They would have never done this on their own account, that’s for sure.

BTW, in case anyone got emotional during today’s tape:

Go out there this weekend and enjoy life. Time passes quickly if you’re staring at a ticker all day.