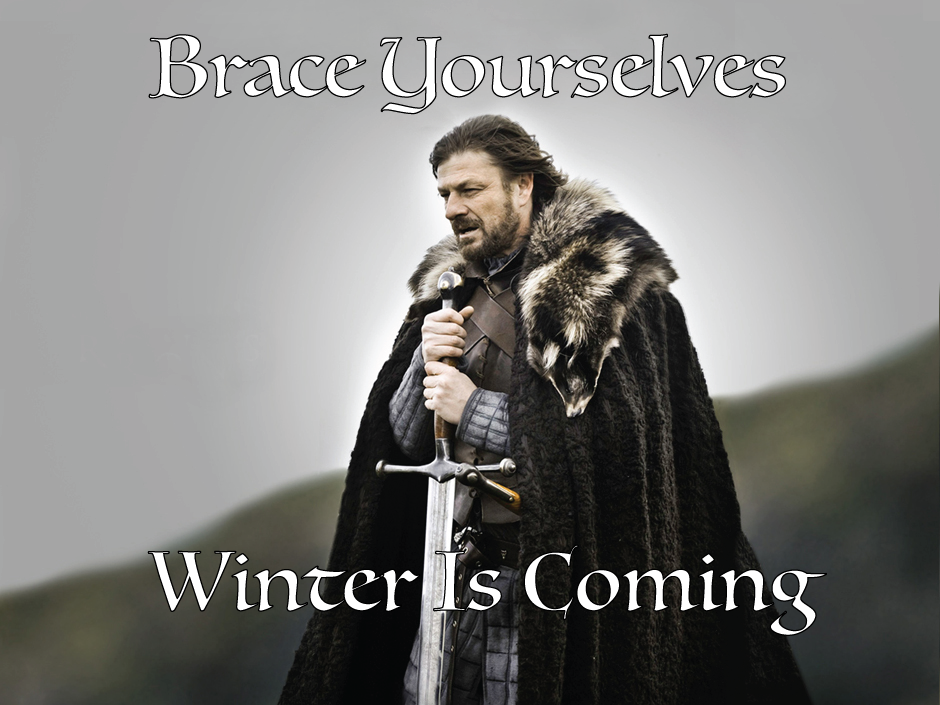 Winter has become one of my favorite seasons here in Valencia. Although the stream of tourists prowling our streets never really ceases completely things eventually start to quiet down near the winter solstice as most travelers return to their Northern shores in preparation for celebrating Christmas with their families. For us traders however week #51 marks one of the busiest earning periods of the year as the historical odds usually are in our favor. But of course not always! 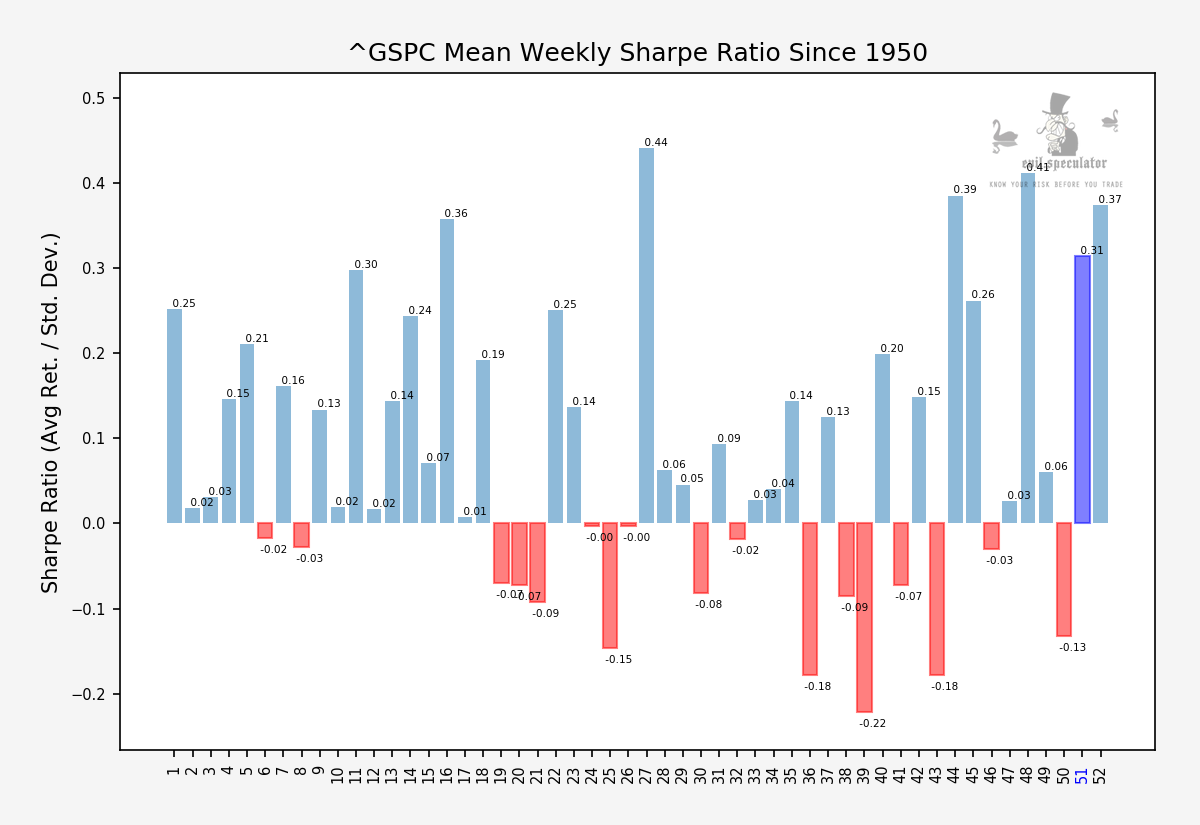 A Sharpe ratio of 0.31 only ranks week #51 only as the 6th biggest earner but that’s not the selling point in this case. 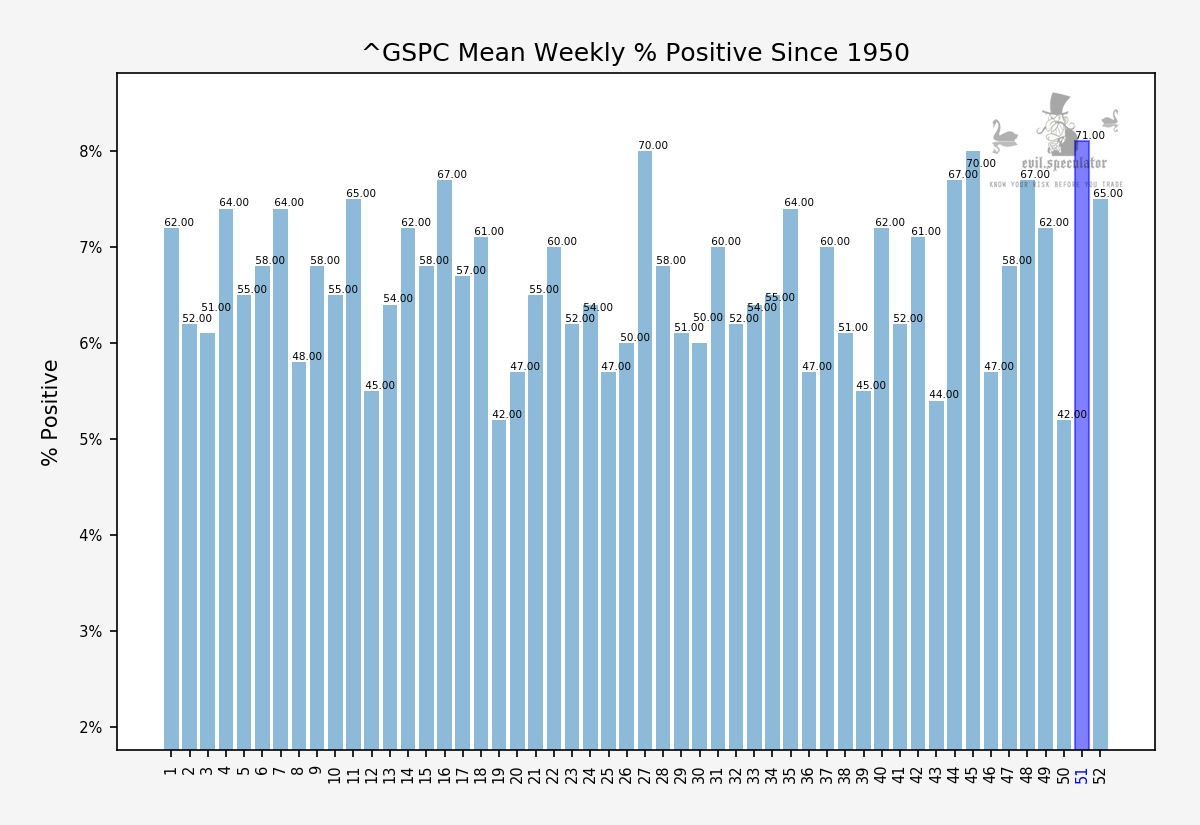 This is! Weekly percent positive has us at a whopping 71% which makes it numero uno for the entire year. Hell yeah! I take those odds any day! 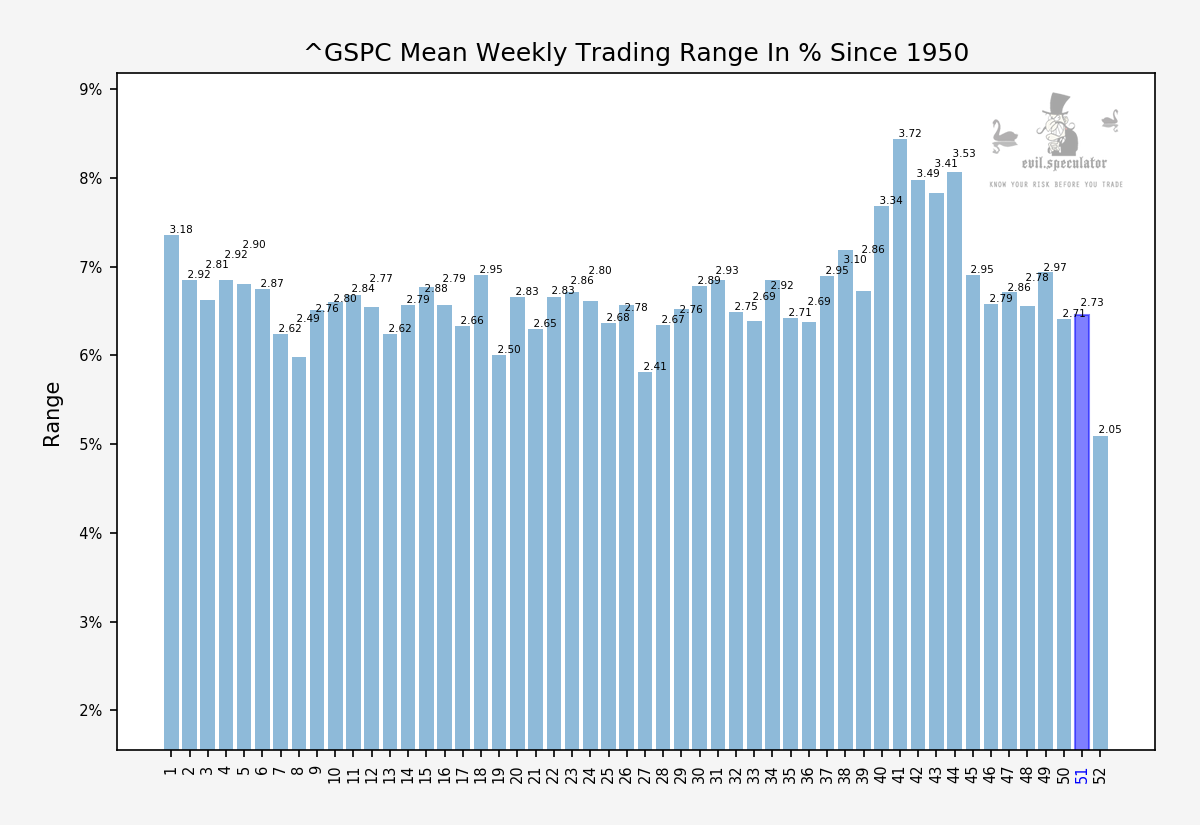 The trading range also looks pretty standard. So what could go wrong? 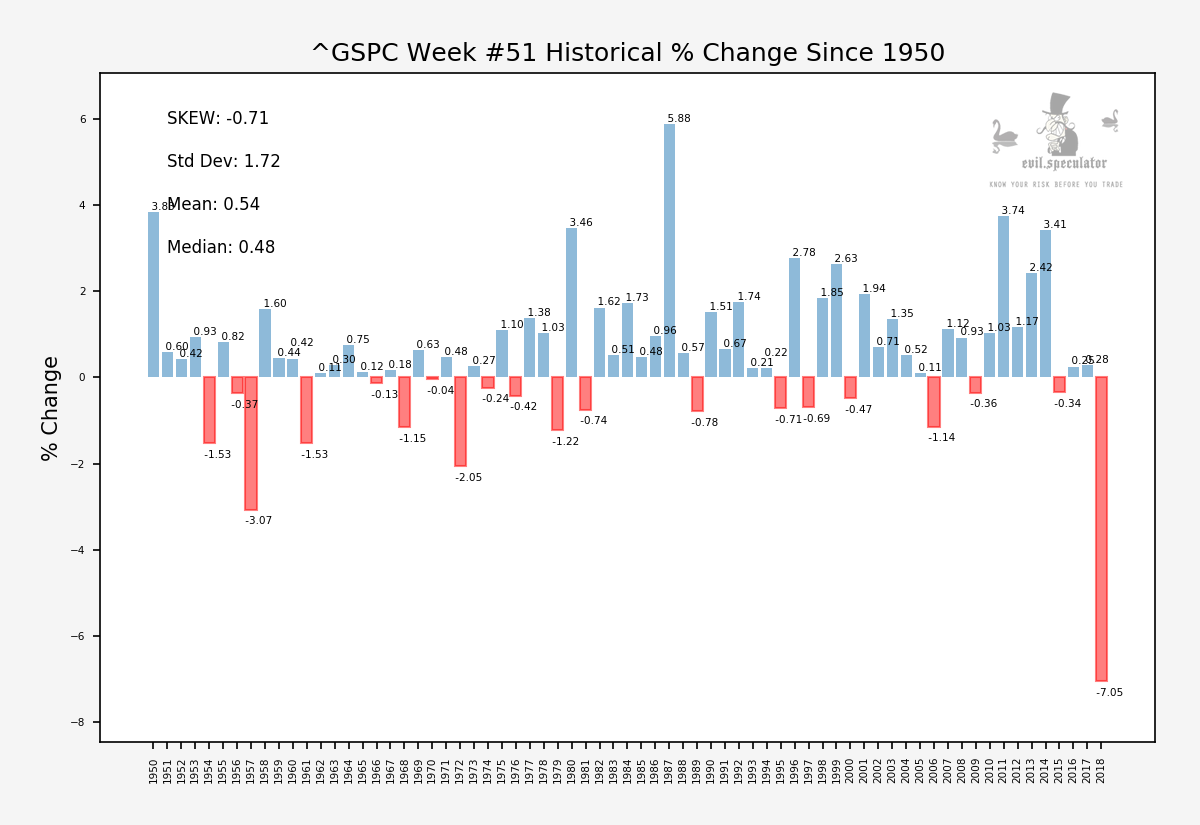 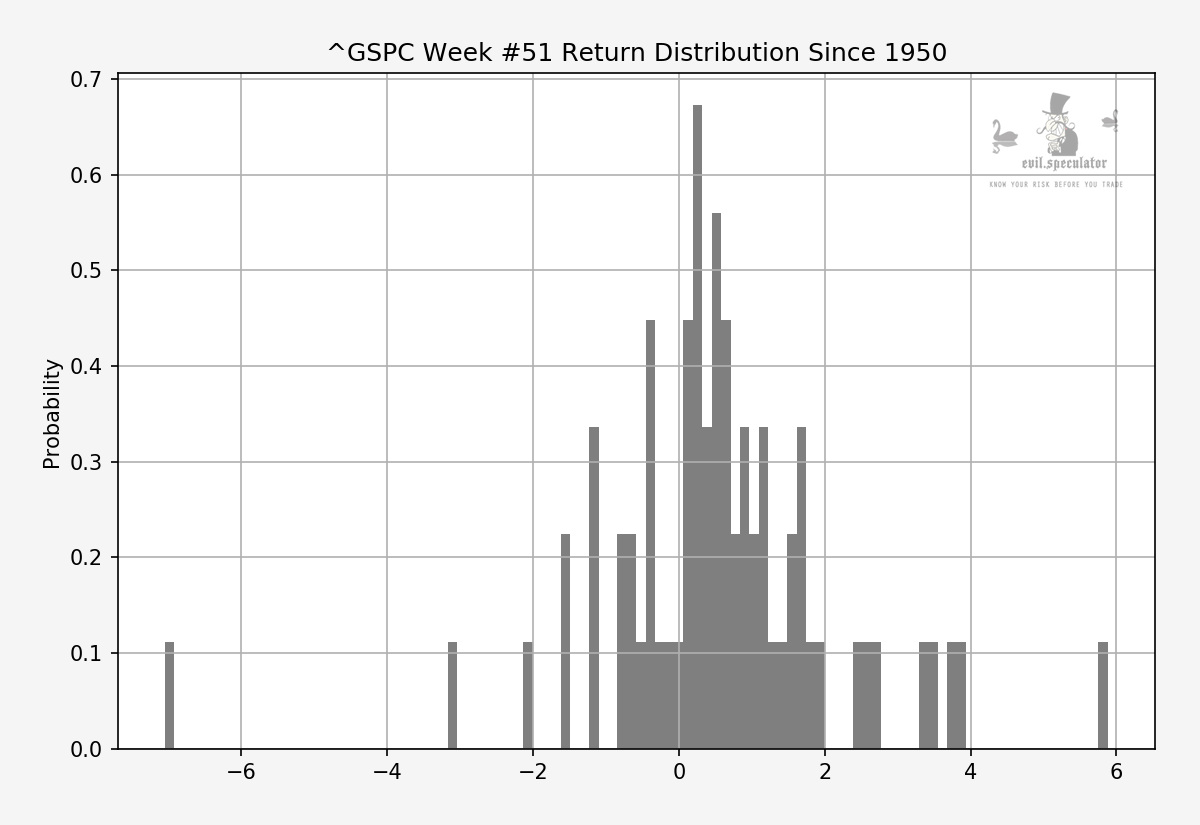 Which is somewhat balanced out by the ~6% winner we had back in 1987. That year sounds familiar doesn’t it?

Well, if you’re a young buck and are blanking right now: it was the year of the infamous Black Monday which occurred on October 19th, 1987. At least we had better music back then plus I had more hair, so all in all it was a good year.

What’s interesting however is that such a big outlier occurred after one of the worst take downs just two months earlier. Definitely something to remember for next time. And yes there WILL be a next time – it’s rare but six sigma events do happen every decade or so.

Which actually is mutually contradicting if you consider that the definition of a six sigma (six standard deviation) event is 2 * 10^-9 or twice in a billion. Which shows that reality and mathematical models often don’t line up (especially in those cases when it matters the most – see Nissan Taleb).

Here’s a great explanation for you math nerds: 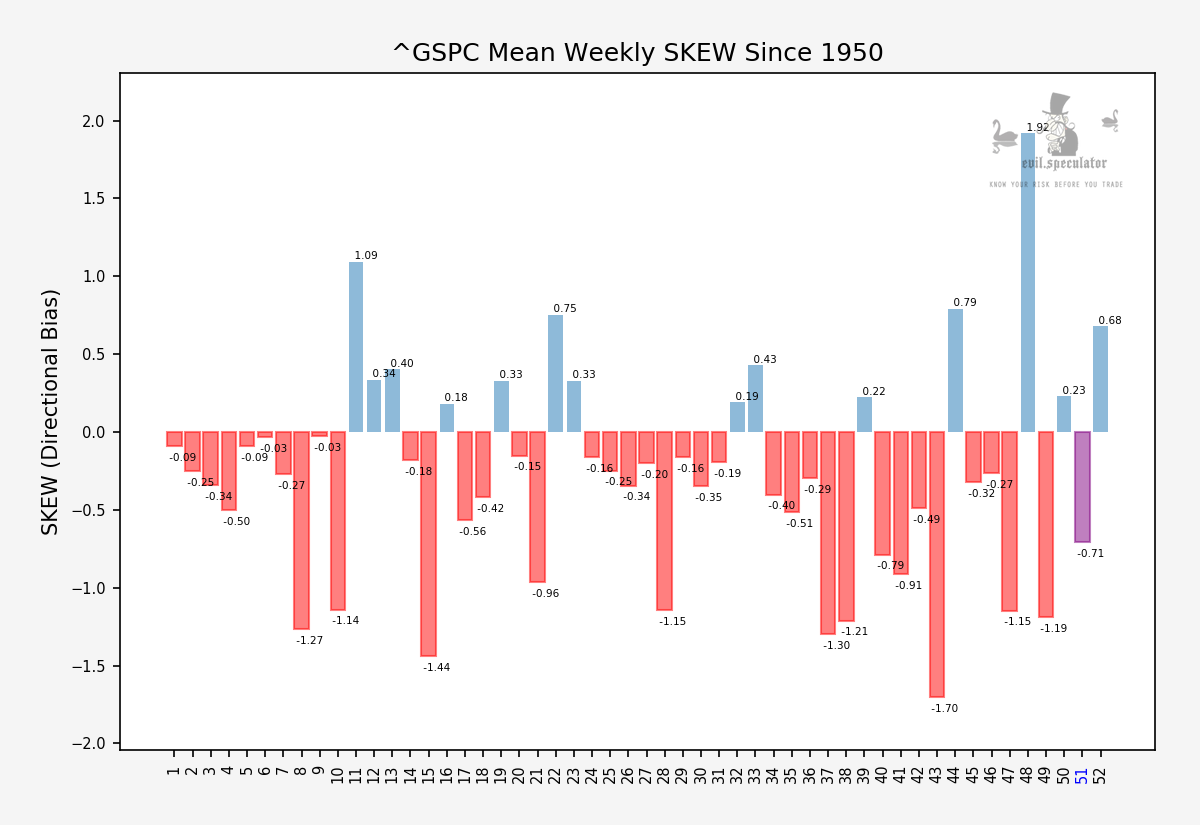 I keep saying that every week and perhaps this little reminder makes more sense to you. Left skewed shows the mode (the peak) on the positive side (assuming a 0 centered distribution). Just remember that the median is opposite of the SKEW 😉

Now for my intrepid subs here are the top and bottom performing stock victims for week #51: