Wrapping Up The Week

Wow, that was quite a week! Just a few days ago the bullish case was standing on very wobbly legs. But once again the bulls managed to take advantage of inaction near an important inflection point at 1980. Four days later we’re over seventy handles higher, having already breached the bull’s Rubicon at ES 2055. 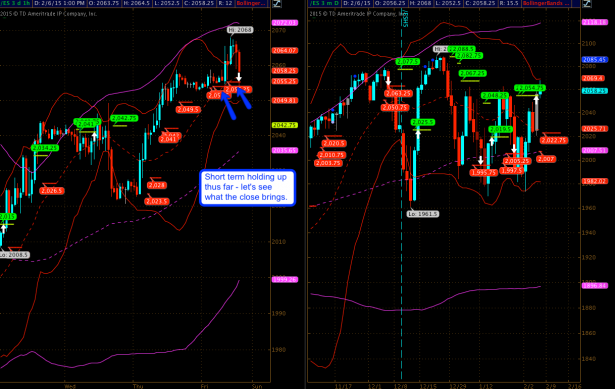 Are the bulls now completely out of the woods? Heck if I know – but thus far the short term panel is holding up to a little late Friday shake out. We have the 25-hour right beneath us and if that one gives then odds suggest the 100-hour will offer support. 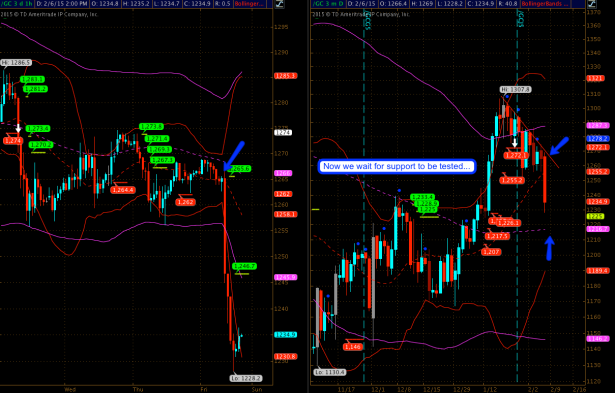 I’m really kicking myself for skipping gold this morning. I looked at it and actually had painted that diagonal in the morning. But I wanted to give it another day and missed this gorgeous slide lower. Well, you can’t get ’em all as they say and there’s no sense in crying after lost opportunities. I now have my eyes on the 100-day SMA which just may offer some support next week. So no setup just yet but it’s on our watch list for sure. 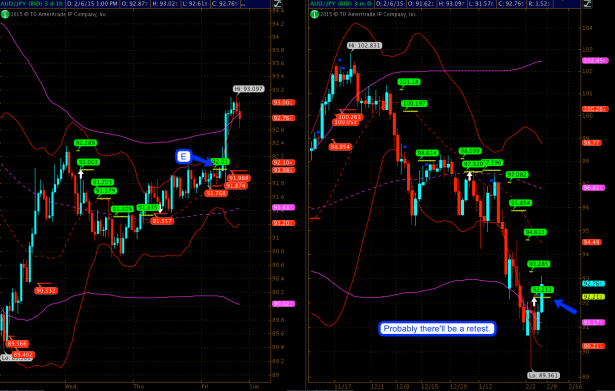 The one setup I posted for the subs this morning was AUDJPY and we actually managed to get a very nice entry here. Now look at the daily panel and you probably already know what I’m going to propose. Move your stop near break even and let’s see if we can’t convert this sucker into a daily campaign. However be advised that we most likely are going to see a retest of the NLBL. That’s why I said ‘near’ break-even – we need to give this one a little space. 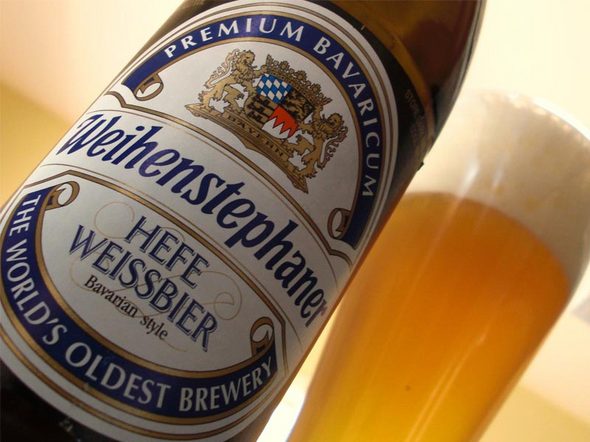 And now it’s time to crack open my traditional Friday evening Hefeweizen – I more than deserve it if I may say so. By the way, can someone enlighten me what it is with you Americans all starting to brew your own beer? I just chatted with a fellow expat at the gym and he told me that he’s brewing his own beer because he hates the Spanish flavors. Honestly I actually like them – they’re not bad, perhaps a bit light for my taste but it’s probably cultural. But that’s beside the point – you can pick up pretty much any German brew in this town, so why would anyone bother with brewing his/her own beer? You think you can beat over 1000 years of experience in your silly make-shift alchemist’s den?

Here’s a YT clip of the Hacker Pschorr beer tent in München during the Oktoberfest. Yes, that’s a tent ladies and leeches and you probably have seen less sophisticated permanent structures over in Las Vegas. Just to give you an idea how serious Germans are about the art of beer brewing.

Look people, we’ve got an entire country of anal retentive perfectionists devoted to building excellent cars and brewing the most delectable and purest assortment of beers on the planet. I say – leave the beer brewing up to ze Germanz, jaa? Besides, as you know, we better off keeping those Krauts busy! Who knows what they may think up next if the Chinese start pushing them out of the automobile market and you damn yanks start brewing your own beer. So in the name of world peace I beseech you to pick up a few bottles of German brew this weekend! 😉