Wrapping Up The Year

And here we are – the last trading session of 2014. It’s been an exciting year to say the least with plenty of nasty traps along the way. But we made it through just fine, consistently banking coin all year, by simply sticking to our guns (i.e. charts) and of course by persistently honing our game. Trading is a constant arms race and stagnation equals slow death – the sharks are constantly circling. I for sure am a better trader today than I was last time I drafted my final post for the year. I am glad you all were along for the ride and hope your accounts are better for it. Now let’s wrap things up Evil Speculator style – with an exhaustive long term perspective of where we’ve been and what the new year may hold in store for us. 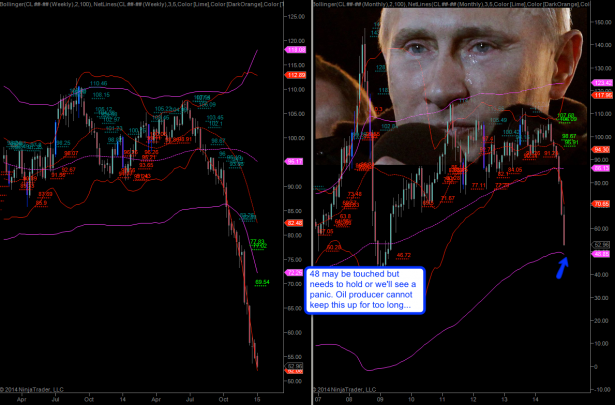 We have a lot of contenders but the most salient chart of the year clearly was crude. Rarely have I witnessed such a concerted and systematic sell off, even in futures. I say rarely because if you look back it has happened once before in 2008 in the midst of the financial crisis. That drop took us from over 140 all the way to 40. But this time was completely different in that we didn’t see any major market dislocations and in my mind this clearly was a message to Putin from our friends at the State Department. 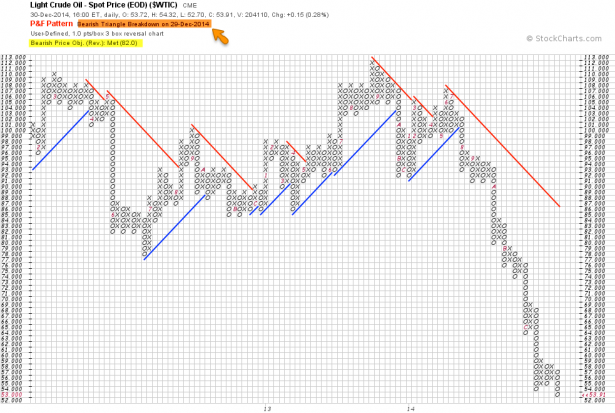 Which makes it a bit harder to propose any technical support levels – many have tried and failed over the past few months (I wasn’t one of them – knowing the cost of engaging in long term predictions). However there are inherent dynamics in the production and supply chain of crude which suggest that prices below the 50 mark would be difficult to maintain for extended periods.

Our P&F chart originally suggested a price objective of 82, which has been far exceeded. So technically speaking we don’t have much to hang our hats on and it’s quite possible that we may see an exhaustion spike lower before crude is ready to paint a floor. Plus we just triggered a bearish triangle break down two days ago and that’s not the time you want to start accumulating long positions. Remember that markets can remain ‘irrational’ a lot longer than you can remain solvent – that rule applies to both the up and downside. By all means buy the fear but make sure you have at least some technical context to back you up. 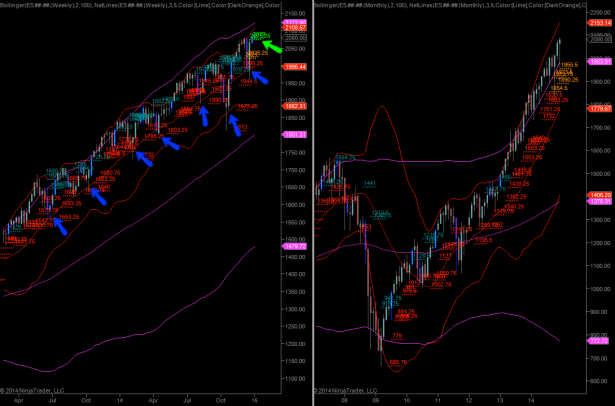 It’s not been an easy ride in equities this year and by all definitions we are in the late stages of an historic five year bull market. But it’s those late stage that often prove to be the most treacherous, as they are paved with increasing volatility on both the up and down side. The 25-week SMA was tested five times this year but the bears only managed to breach it once. It was the most serious medium term correction we had seen since late 2012 but the counter response speaks to the more volatile market conditions we should also expect for 2015. 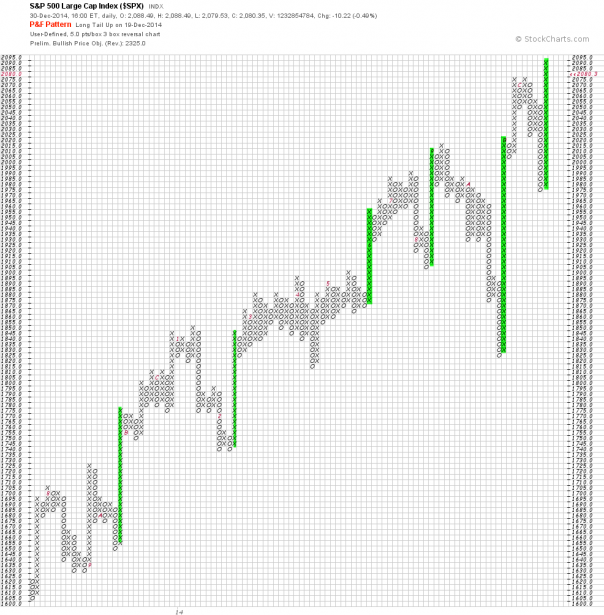 A few weeks ago I posted this P&F chart and mused that the rallies proceeded faster and more violent than the preceding corrections. Usually, meaning 95% of the time, it’s the other way around and there’s a reason why they call it the ‘wall of worry’ and the ‘slope of hope’. Medium and long term bull markets grind higher and then eventually correct relatively quick. A contrary situation implies that we are indeed in the late stages of a bull market. So I don’t think 2015 is going to be an easy year for equities. Now for us evil speculators this may actually be good news as there will be plenty of opportunities to play the swings. To all you investors however I suggest that you prepare yourself for rougher waters ahead.

Quite a bit more waiting below the fold – secret decoder ring required. 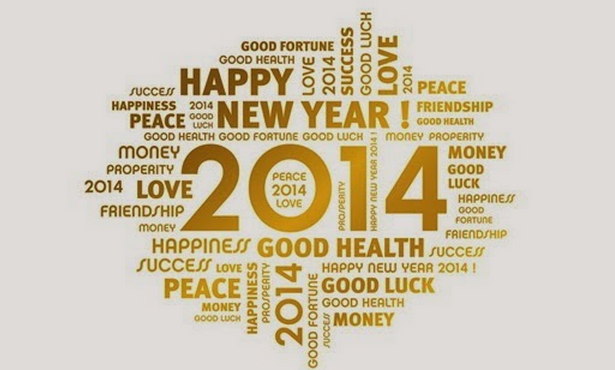 And with that I would like to wish all my readers and in particular all my intrepid subscribers a very happy near year. Prosperous? Well, that goes without saying, after all that’s what we are here for. Scott and I will be continue to work hard to steer you through the coming year, banking coin as always, and most definitely enjoying a few good laughs on the way.