You Ain’t Seen Nothin’ Yet 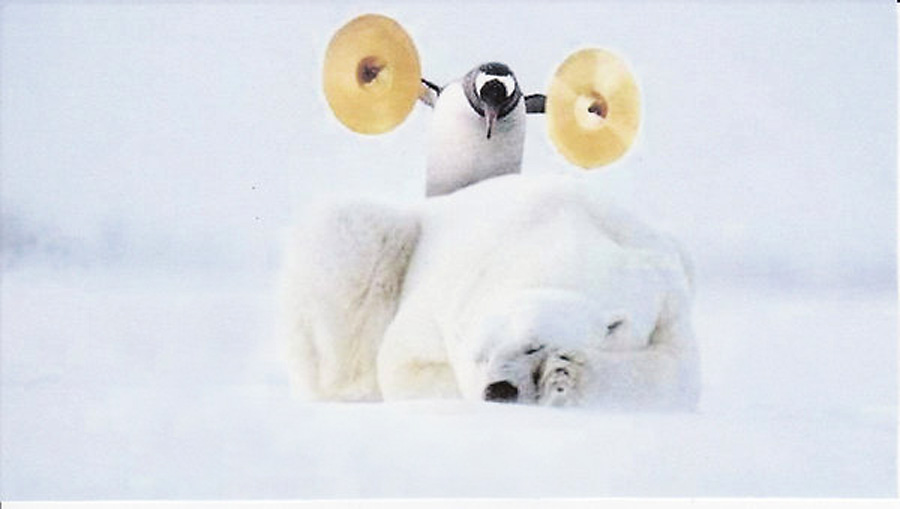 I seriously doubt that the average market participant realizes the magnitude of the devastation that lays ahead. It is our human nature to project forward based on recent events – a common cognitive bias which can easily lead to painful losses during regular market conditions. But what we are facing over the coming weeks and months will register several standard deviations beyond current worst case scenarios, at least based on activity/pricing I’m currently seeing in the option chains.

We have a lot of material to cover this morning. So grab a cup of your favorite morning brew and pay close attention. Yes, there will be a test. 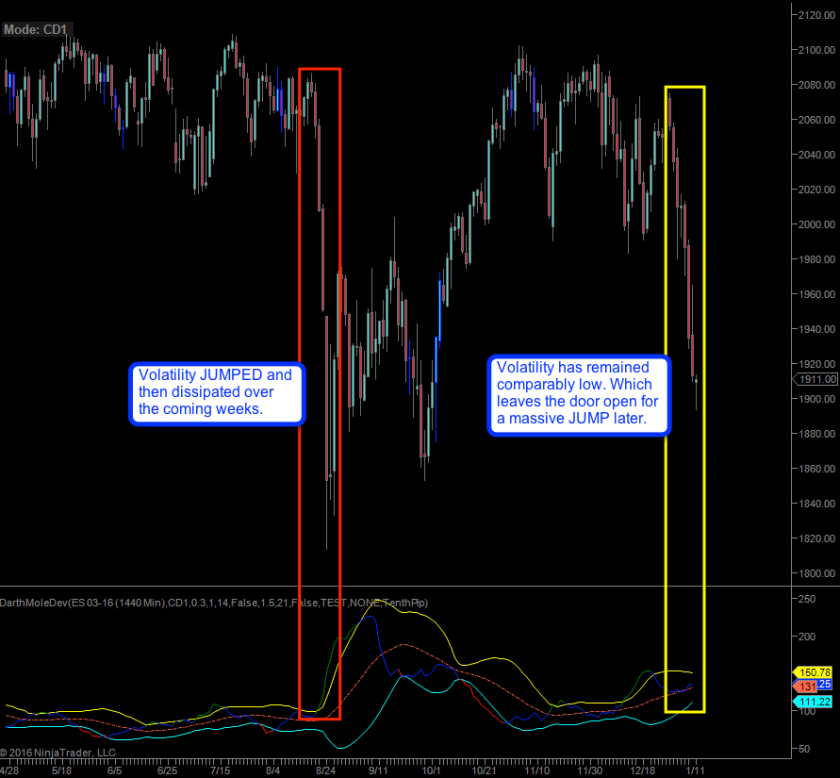 Let’s start with daily realized volatility on the S&P futures. Once again I doubt that GARCH models are adequately preparing us for the future. Take a look at what happened last August when we quickly dropped from ES 2080 to 1820 in five brutal sessions. As expected volatility massively jumped and then slowly dissipated over the coming weeks. So we are looking here at a sudden down trend, followed by high volatile sideways tape, which eventually transitioned into trending directional lower volatility tape.

Now look at what happened over the past five/six sessions in comparison. We dropped almost as far in a similar period of time. Meanwhile the signal on the volatility front has barely budged. When compared with last fall this sell off has been a very systematic and a lot less emotional. Instead of a quick wipe out scare down we are slowly dropping day by day without any profit taking by bearish participants.

And that is very very scary. Because this is not just a quick scare the children dip buying opportunity (although an intermediate low will soon present itself) – this is a completely different beast and most likely only the first leg into something much bigger. 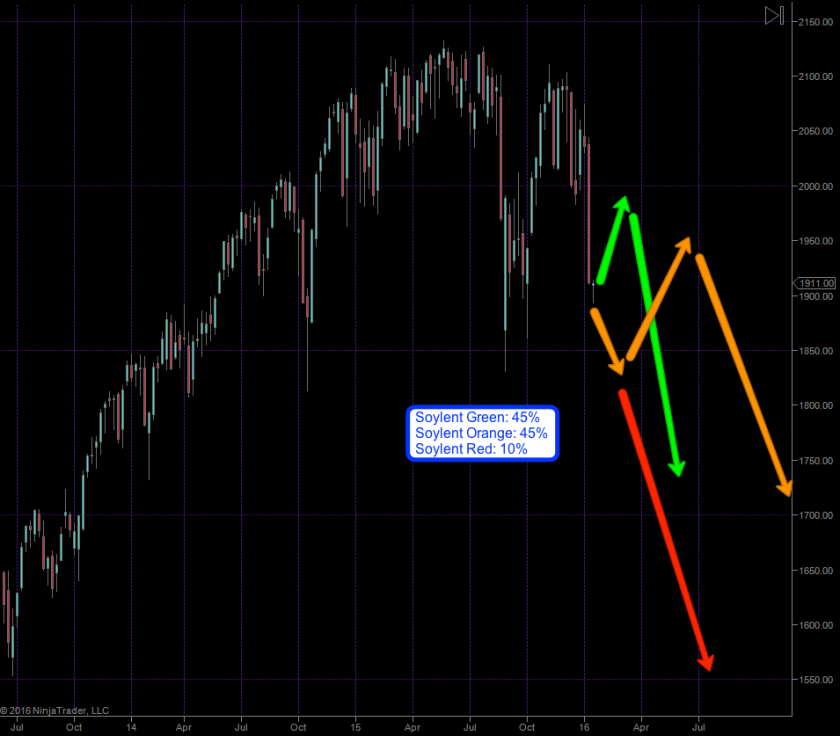 So we we have three scenarios that I’ve pulled out of my backside over the weekend. We can quibble over the various percentages but here it goes:

What I must emphasize here is that the most bearish scenario on a short term basis is more bullish on an interim basis (but not long term). Inversely the more bullish scenario on a short term basis (i.e. Soylent Green) is the most bearish. In other words, if we drive up over the coming day or two I will be very actively looking for short exposure. I would also accumulate medium lottery tickets (i.e. OTM puts). 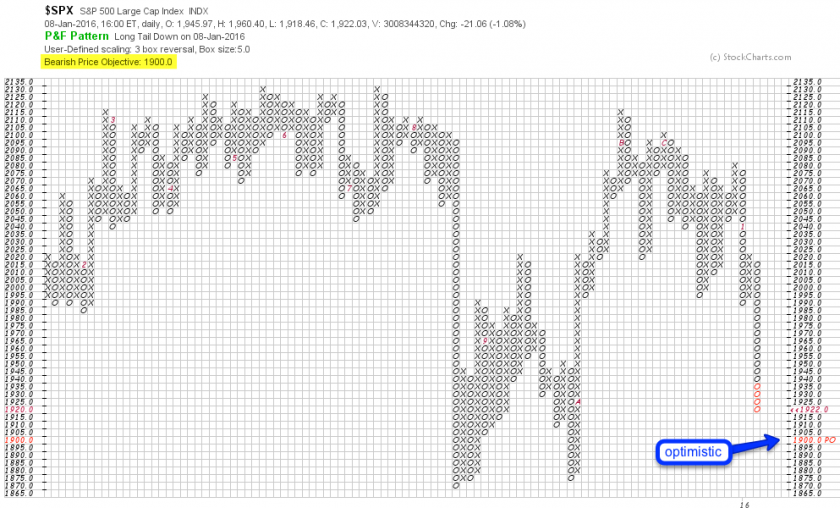 Recall that our P&F chart predicted a drop to 1900 and we just touched that earlier this morning (on the spoos but alas). That also tells us that the bears are okay until about 1970ish – after that the soylent scenarios start losing credibility as a more complex correction may be in the works. The reason for that is that 1970 would produce a low pole reversal warning and thus put the bears on notice to get their act together. 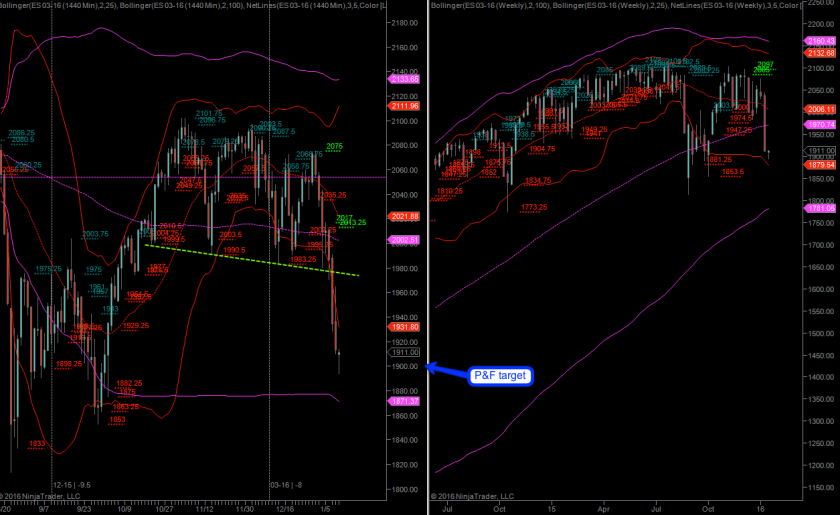 As you can see on our daily and weekly panels, that would actually be the exact price range that previously offered bullish support. So a jump to that would be veritable manna from heaven as it would represent the perfect inflection point. 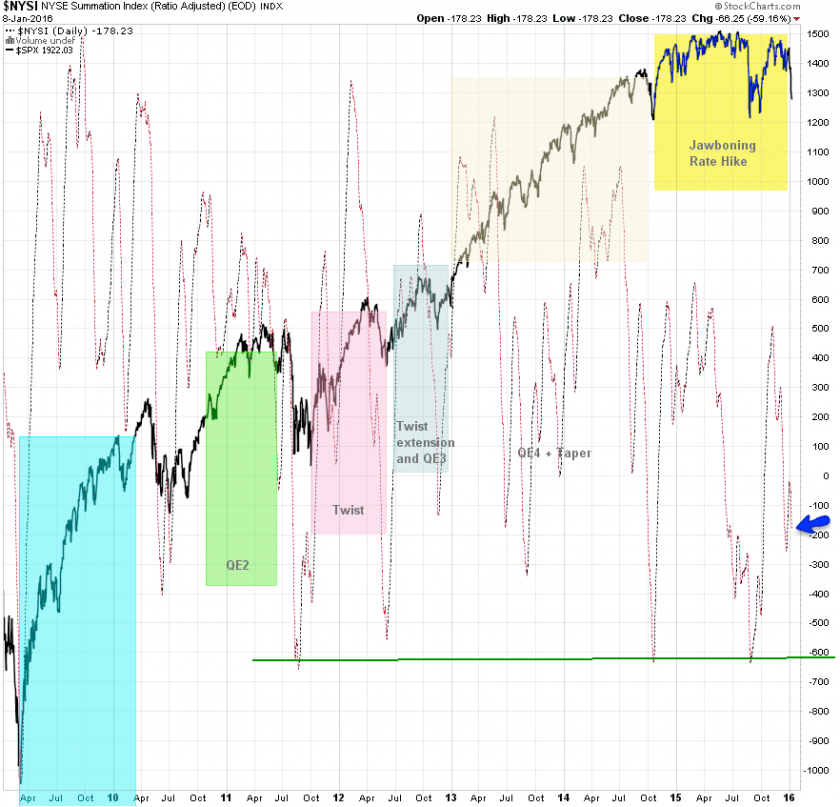 What follows here and below is a laundry list of momo evidence backing up my bold claims. Let’s start with NYSI – the NYSE summation index. It has been pretty useful on a long term basis over the past few years when attempting to assess the potential of a bounce after a meaningful sell off. As you can see we’re not anywhere near we should expect a full scale reversal. A little bounce of course can never be ruled out.

Quite a bit more following below the fold – please join me in the lair:

Modus Operandi for this week:

Do not step under the falling sword. But also don’t also worry about too much about dip buying. We will try to catch a good entry if it presents itself but at this point we should be more concerned about grabbing a cheap ticket on the bus heading into the abyss in the weeks/months to come. Keep it frosty – be prepared for violent snap backs – they are almost guaranteed to happen. You have been warned.