You Know Nothing About Bitcoin Jon Snow 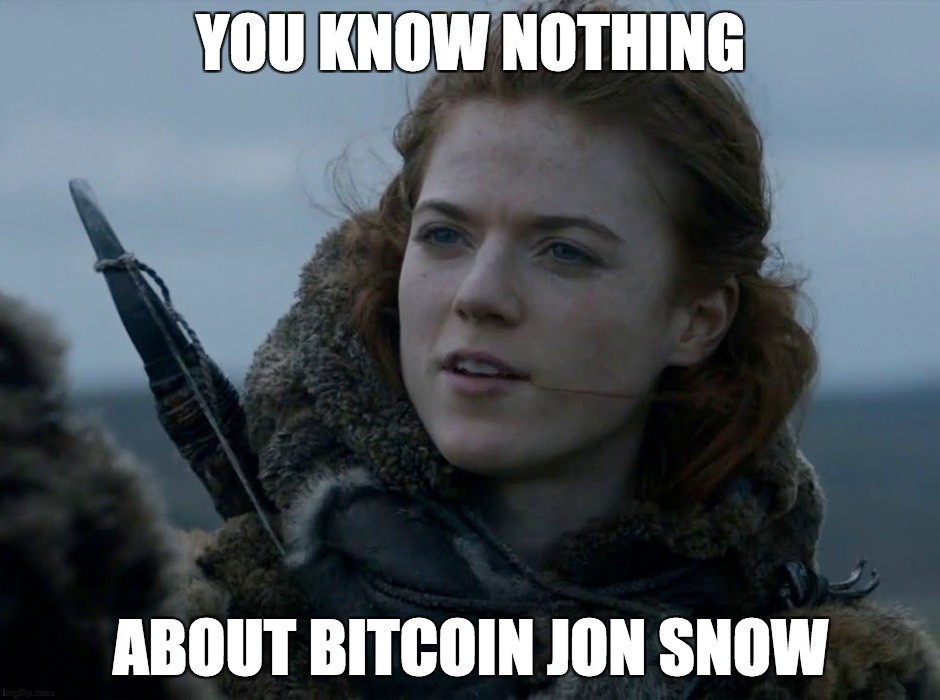 I pose that Jon Snow would actually have a better lock on crypto currencies than any of those wannabe-experts that currently seem to be popping out of the woodworks. Jon for one may actually instinctively grasp that convincing others of your quest requires a modicum of evidence demonstrating your competency in the subject matter. For example in during his personal quest he had to demonstrate a) that the White Walkers existed and b) that can they be killed. In the supposed bitcoin expert’s case I would only need to ask two simple questions: a) where were you when BTC was trading below $500 (or less) and b) why didn’t you tell me to buy it then? 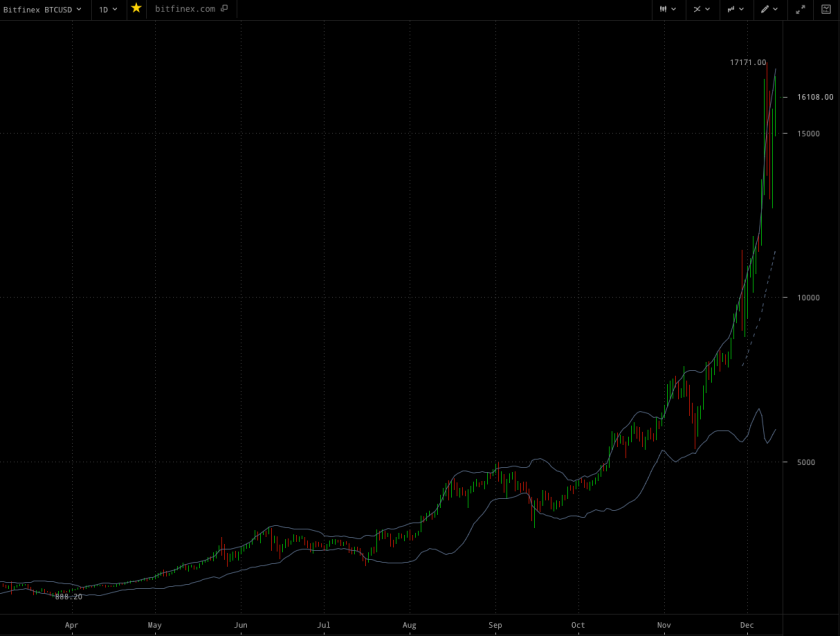 If nothing else Jon would surely understand that pretending to be someone you are not and acting on that pretense may not just get you killed in the process but most likely others as well. Which of course brings me to the current bitcoin sponsored gold rush that’s playing out in the main stream media. Whoever Satoshi Nakamoto really is, I’m pretty sure he’s regretting he wrote that damn white paper by now. Not because bitcoin in essence is a bad idea, actually is a fantastic idea which I believe will come to fruition over the long term, but because before things settle down and ‘normalize’ a lot of people are going to be really hurt in the process. Or perhaps he knew and simply considered it to be collateral damage – I wouldn’t put it past him (or her?).

Judging by the chart above a lot already have, don’t let the current price fool you. After almost a decade of being the humble host of a popular trading blog I just know how retail thinks and operates, I’ve seen them steer straight into financial abyss many times and nothing I or my fellow travelers offered or suggested made any difference. And that was before the world began to embrace a crypto currency that currently seems to swing in 20% ranges on a daily basis. That would be called ‘f…ing volatile’ in regular forex if it happened on a monthly basis, so I’m sure you can appreciate my apprehension. 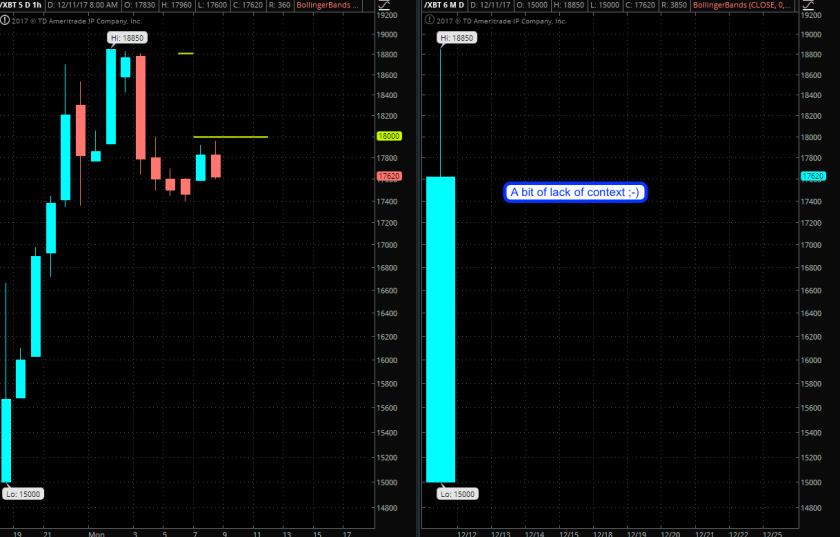 But enough now with all the bitching, as this post is supposed to be celebrating the fact that bitcoin futures officially started to trade on the Cboe (symbol XBT) yesterday evening, soon followed by a similar contract on the CME (symbol BTC) this coming Sunday.

Which IMNSHO is excellent news for obvious and not so obvious reasons. The obvious one is that we as traders and full time evil speculators will be able to buy and sell bitcoin futures contracts at the NBBO on an established and tightly regulated U.S. based futures exchange. And it goes without saying that I have a lot more confidence in the Cboe or the CME than in any of the current crypto based startup exchanges such as  BitMEX (USD), OKCoin (USD), or bitFlyer (JPY).

The not so obvious reason for my not so youthful exuberance regarding bitcoin futures is that in my expectation they will, over the long term, have a positive impact on the pricing of the underlying BTC as well. Which I am confident will eventually trickle over into various other crypto related currencies and markets. As for right now we’re still in pretty uncharted territory and the daily panel on the XBT shows us one candle which is about 500 candles too early to produce any meaningful technical context. Which over the coming weeks and months relegates us to solely the short term panel, and for playing small swings that’s probably fine, although I usually prefer additional context. 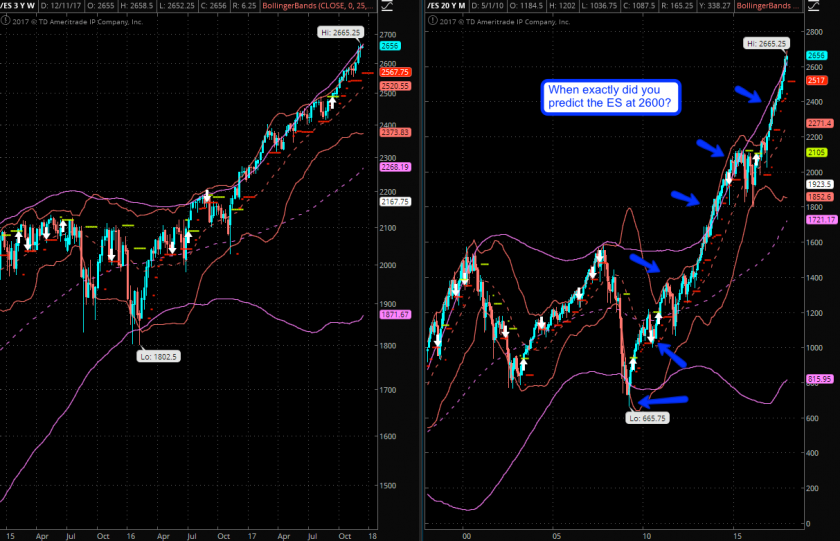 Now the theme of this post was chosen quite deliberately as I myself did a lot of soul searching over the past few weeks and months. Unlike many of the current bitcoin pundits and self proclaimed experts I actually bought some bitcoin at < $400 back in 2014. But it was mainly as a backup payment mechanism for my frequent nudie bar visits (just kidding) and to simply get my hands dirty and learn how that ‘bitcoin thingy’ actually works (not kidding). I’m still holding some of that (as nudie bars in Spain are overrated) and if I had any sense I would probably have sold it all by now.

But the result of all that soul searching is that I had no idea that BTC would be trading at friggin’ $17,000 just three years later, otherwise I would have sold all my earthly possessions and pawned my wedding ring in exchange for some of that digital gold. And in the same fashion I never dreamed that the S&P 500 would be trading at 2600 when it was scraping $667 a decade ago. And I didn’t think it would when it was trading at $1000, $1,500, even $2000.

The long term E-Mini chart above is posted here for a reason because I want you to meditate on your own personal predictive ability and then think long and hard about whether you think that you know anything about bitcoin, least of which where it will be trading not just 10 minutes from now, but a month, or a year from now.

And although these are mainly academic questions in that you never truly know where a financial asset or its derivatives are heading, it should be the very first question that needs to be addressed when considering a substantial investment in any of the currently available crypto currencies. Again, I’m not saying this to be negative about crypto, I very much believe in the concept, especially given the global con that’s called government issued fiat currencies. I’m strictly approaching bitcoin as I would ANY financial asset, be this a currency, a futures contract, an option, a bond/note, a stock, or what have you.

Time To Grow Up

From this perspective the issue is settled fairly quickly, at least in my mind: Treat bitcoin and its various crypto offshots no different than you would any other financial asset out there. Yes, it’s currently exploding and you don’t want to miss out on a ‘once in a lifetime opportunity’. Well, sorry to break it to you pal (or gal) – you already did unless you bought it at < $1000 or better < $500. That train left the station a long time ago.

From here on out however bitcoin needs to be treated as a regular financial asset with its own characteristics and of course specific volatility considerations. The latter will most likely continue to plague us in spates for the foreseeable future but I am confident that things will in the end begin to slowly normalize. And that, beyond the current gold rush, would be an extremely positive development as it would signal to the rest of the investing public that Bitcoin has grown up and is here to stay.