You have been asking – you have been begging – and fortunately a few of you resorted to bribing. I myself of course always wanted a Zero indicator for the FX market but knowing what’s feeding the Zero for the S&P the looming challenges on the coding side appeared to be rather daunting. Not only did I have to figure out a way to produce a similar style market oscillator for currency pairs – I also had to recreate several market metrics that are basically unknown in the Forex world. So knowing all that I realized that my only chance to slay the beast was to wait for an undisturbed stretch of time during which I could sit down and focus on coding for a few weeks straight. If you happen to be a code monkey and have ever slung more than a few lines of code then you probably can appreciate that ‘being in the zone’ is a mental process that is essential to producing any high quality (and bug free) work.

But the long wait is finally over – after several weeks of hard work I proudly present to you the beta version of what shall be known as our brand spanking new ZeroFX oscillator: 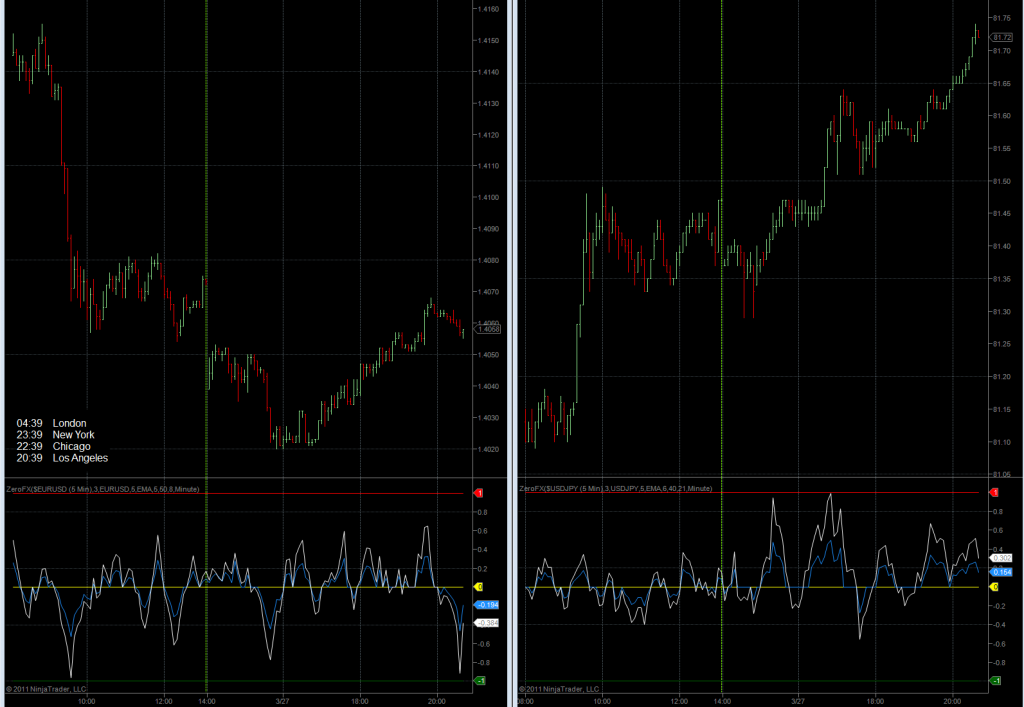 There it is in all its glory – and I have to say that I am rather happy about this first effort. I think there is enough space on this screen to accommodate four FX pairs but let’s start with my two favorites, the EUR/USD and the USD/JPY, and then update the chart in a few days once you guys have voted for your FX favorites in the new poll on your right.

Obviously this is only a beta release and I’m sure over time we’ll find all sorts of ways to improve it. My first impression is one of familiarity – and I hope you agree. As I was putting all the different pieces together to produce the final signal I was running it across several weeks of data and was pleasantly surprised by how similar it felt to our old S&P Zero. If you have been a Zero sub for a while then you will most likely feel right at home. Here’s a run down of what makes it tick and how it differs from the S&P version:

Everyone Loves A Freebie

Now, the really good news is that most of you guys are already subscribed to ZeroFX! That’s right – I used the member admin console to give anyone whoever created an Evil Speculator login a free two week trial. The reason why i said most of you guys is that the process somehow got stopped on the server end and in the end only about 80% of all members got touched by the database update. So, if you want to give this thing a spin then please point your browser here. If it doesn’t accept your existing login then please go to your membership page and add ZeroFX to your subscriptions (for free under add/renew subscription). If you have never subscribed to anything here on Evil Speculator then you will need to sign up here first and create your login credentials – again you will get 14 days for free.

Depending how this thing flows and whether or not it offers us a consistent edge I may extend the trial period for a bit longer. If you must know – once it goes pay2play the subscription fee will be the same as for the old Zero – $49.- per month – no auto renewals. I think that’s a steal for an indicator that runs 24×6.

Obviously these is but a humble beginnings. It is up to you stainless steel rats to provide me with comments and suggestions that will help make it better and useful for banking coin in the Forex markets. And no – I will not change the background to white or gray as I hate looking at bright charts at night – sorry. That’s my only prerogative – otherwise I’m open to all types of changes of course. If you think it sucks – please let me know and tell me why. If you love it – I’m always open to praise but would love to know how exactly it’s helping you and in what scenario. Maybe ZeroFX is helping your own FX trading system – or it supports one of your existing indicators. Your inquiring market megalomaniac wants to know! Obviously posting and annotating charts in the comment section is strongly encouraged and I hope you guys will go all out.

Finally, please vote! Another advantage of the ZeroFX is that it can support a variety of FX pairs. I would like to settle for a 2×2 grid chart, thus accommodating your four favorite FX pairs. Unless of course the majority thinks that the chart would be unreadable. In that context I would also like to know if 1600×1200 is too large and if we should change it to 1280×1024.

That’s all I have for tonight – quite frankly – I’m exhausted. As you may have noticed I have been a bit quiet in the past two weeks and that’s because I was working my butt off to launch this thing. Now that it’s up I hope I can pick up some of the slack that will be left by Scott’s five day mini vacation. Damn him that lazy Ozzie bastard! 😉