How To Develop A Trading System – Part 1 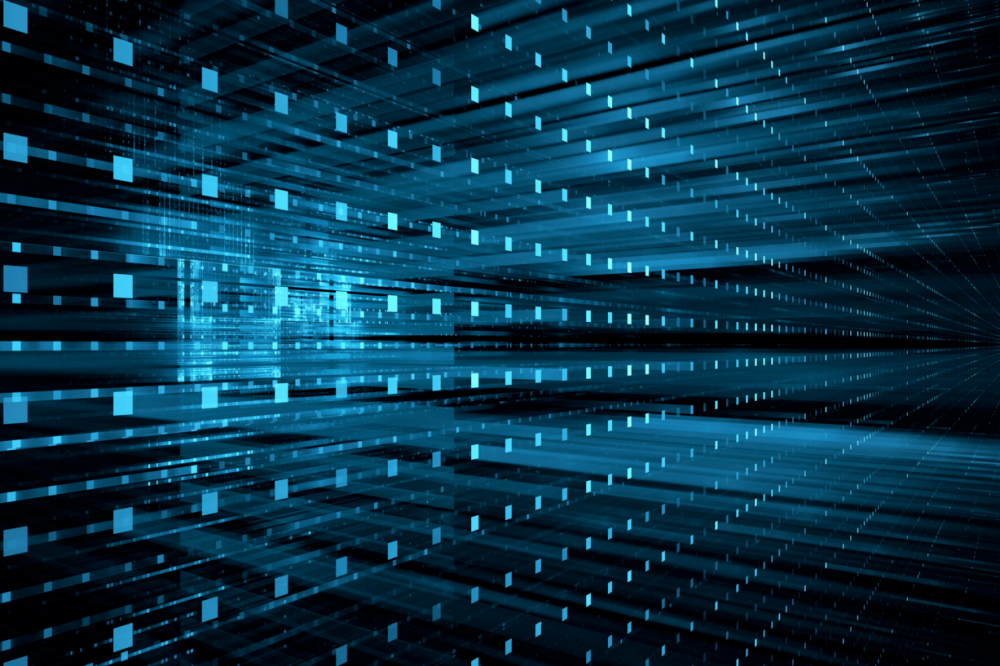 In recent weeks I have been quite prolific regarding the current state of affairs on the equity front. There really is not much to add and if you have been following my work then you should be well prepared and ready to pull the trigger with confidence once equities decide to pick a direction later this week. Thus instead of regurgitating my long term charts I have decided to use this Labor Day as an opportunity to indulge your recent requests for some perspectives on basic trading related concepts.

As I am a big fan of the ‘jumping in feet first’ method this series will cover how one may develop a complete automated trading system. This will not only allow me to cover various pertinent concepts but more importantly put them into context. Most recently I have continued to refine our Mole entry signals in my spare time and therefore I will use some new discoveries as our starting point. This will be a comprehensive journey which we will undertake together as things are unfolding on my end. As time progresses I am going to walk you all through the various steps involved. Each consecutive part  of this series will cover important concepts to be considered at each stage of development. From the inception forming the basis of a system, the definition and tweaking of entry/exit rules, the resulting MAE and MFE, the definition of expectancy and SQN (and why I don’t care about Sharpe ratio), back testing, forward testing, tools, etc. We’ll go through all the motions and once we’re done you will not only be able to develop your own trading system but you will also have developed a deeper understanding of what separates the wheat from the chaff.

The best way to teach is to lead by example – at least that’s what they say. Let’s pretend I just came up with a promising new indicator – let’s call it the Mole, not so humbly named after yours truly. I am convinced that there may be an opportunity in developing it into a full fledged trading system. So what now? 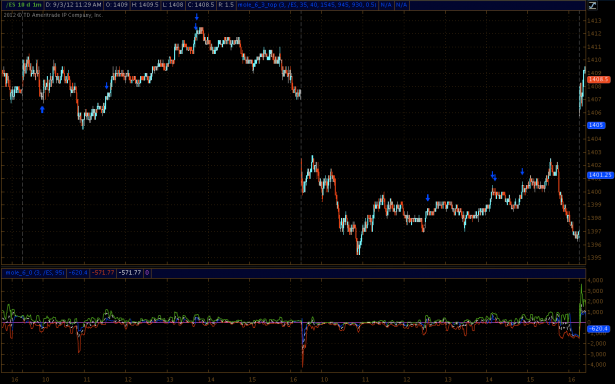 Today we will cover the first phase – system discovery – which of course is the most exciting part. You are still wearing your rose colored glasses and are filled with hope, convinced that you have uncovered something truly remarkable. Of course throughout the remainder of this series we will go about smashing many of such dreams but that’s how we roll here at Evil Speculator.

What you see above is a screen grab of my current 1-min Mole indicator prototype. The Mole indicator you are currently seeing on the live Zero Lite runs against a 5-min E-Mini chart and  that’s a commonly favored chart interval for intra-day swing traders. However two or three signals max a day may be insufficient for a black box trading system capable of dealing with the type of tape we have been observing in the past few years. There are also other considerations based on expectancy and the frequency of trades necessary to maximize profits during a six to twelve month testing period – we’ll explore that in more detail in a future installment of this series. 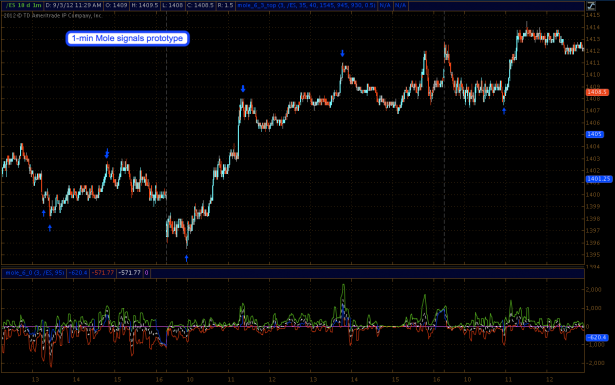 It does not take much imagination to realize that this system will be based on short term reversals. In other words the aim of our Mole black box system would be to trigger near tops and lows, allowing us to scalp a few ticks and then exit. To some of you this may sound self evident – after all everyone wants to sell the top and buy the very low. But in reality many types of other trading approaches exist. FWIW – attempting to define tops and and bottoms is rather ambitious and borders the arrogant. Many have tried and most have failed – at least on a long term consistency basis. The ones that really work you’ll probably never hear about as the originators have little interest in sharing. Of course that does not keep us from trying – consider the Mole my humble contribution to the search for the Holy Grail of scalpers everywhere 😉

As you can see from the current edition the Mole nails the tops and bottoms pretty well. The current phase of development is one of manual trial and error. Basically you produce your indicator and find some way of visualization that gives you the information you are after. For instance – on the bottom you see the various signals that comprise the original Mole indicator. A few months ago an email from a subscriber gave me an idea [1] [2] which in turn resulted in what you now see on the price panel as blue reversal arrows. And that is step one: Your indicator (or whatever you use for your system – you may be only looking at candles) exhibits some type of repeatable prescience in the context of ensuing price movements. You want to exploit that and thus you are starting to think of a possible system. Assuming you know how to code you plan to turn your indicator into a full fledged trading system.

But wait – not so fast. Before you write one line of code (or pay someone to do it) I recommend you spend a lot of time playing with the settings, changing the chart interval, looking for patterns, etc. The human brain has an amazing capacity for recognizing patterns and for putting them into context. Computers are getting pretty good these days but there are certain aspects of the human brain and imagination that still remain outside the scope of even the fastest number crunchers. So use it – get a ‘feel’ for your system. Because the better you understand what drives your system and how changes affect it the less time you will spend later optimizing it. It is tempting to immediately write code and to define a dozen or more settings you plan to later use for optimization. But believe me when I tell you that the time spent planning ahead and simply observing will save you days if not weeks or months later down the line. As many other things in life I have learned that the hard way.

This is basically what I am doing right now. I am still fiddling with various settings to arrive at something that ‘visually’ appears to provide a valid edge. This phase can take anywhere from days to months, depending on the complexity of your indicator/system, your tenacity, patience, or obsession to find the perfect settings. Which do not exist – that much I can assure you. I suggest an iterative approach in which you spend a few days or weeks and then proceed to the next phase, which is initial implementation.

The next part of this series will cover the concept of edge and in particular some theory on expectancy and system quality number (SQN). Both are basic ways to determine the expected profit (or loss) potential of your new system. And without knowing that you pretty much have nothing to rely on but your human subjectivity. Usually not a good basis for success, for we have met the enemy and it is us! Of course a predicate for defining your edge is the creation of entry and exit rules which we will cover next time as well. Once you have developed a sound understanding of how to measure success and failure, as well defined standard deviations of returns, we will be ready to implement and start testing your new system.

The Mole
Mole created Evil Speculator amidst the chaos of the financial crisis in early August of 2008. His vision for Evil Speculator is a refuge of reason, hands-on trading knowledge, and inspiration for traders of all ages and stripes. You can follow him and his nefarious schemes at the usual social media waterholes.
Enjoyed this post? Consider a small donation to keep those evil deeds coming!BTC: 1MwMJifeBU3YziDoLLu8S54Vg4cbnJxvpLBCH: qqxflhnr0jcfj4nejw75klmpcsfsp68exukcr0a29eETH: 0x9D0824b9553346df7EFB6B76DBAd1E2763bE6Ef1LTC: LUuoD6sDWgbqSgnpo5hceYPnTD9MAvxi6cPayPal: https://paypal.me/evilspeculator
Compare
Go