I don’t have much time tonight as I’ve got to work on another project but wanted to put up a road map for Friday for you guys. So, without further ado here we go: 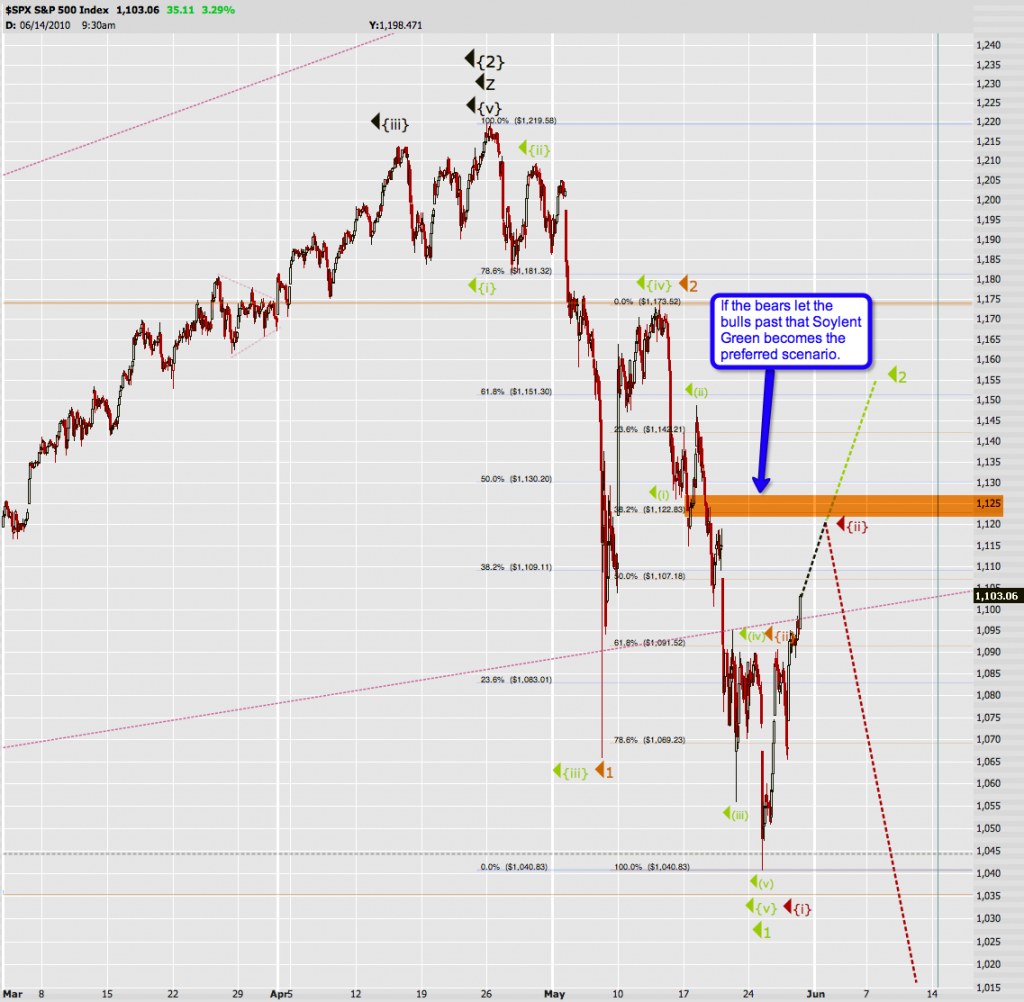 After today’s rip from hell I would be very surprised if there was no follow through sometime tomorrow – even if the boyz fake some weak tape in the morning. ES futures right now are hovering at 1100 – I’m sure the bulls will fight like hell to hold on to that level.

Soylent Red gives the monster Minor 3 wave scenario a bit more leeway. However at 1125 it’s time to say goodbye to that one.

Soylent Green maintains that we are at the onset of Minor 2 of intermediate (1). I would like to see that one conclude at the 61.8% fib mark around 1155, but who knows it could run all the way to 1175. Could get pretty nerve wrecking for the bears for a few weeks, so bring an extra supply of Prozac.

Looking at all the evidence I am putting the odds for Green at 65% and Red at 35%. There’s just too much bullish potential out there to not get exploited – let me repost several I have presented throughout the week: 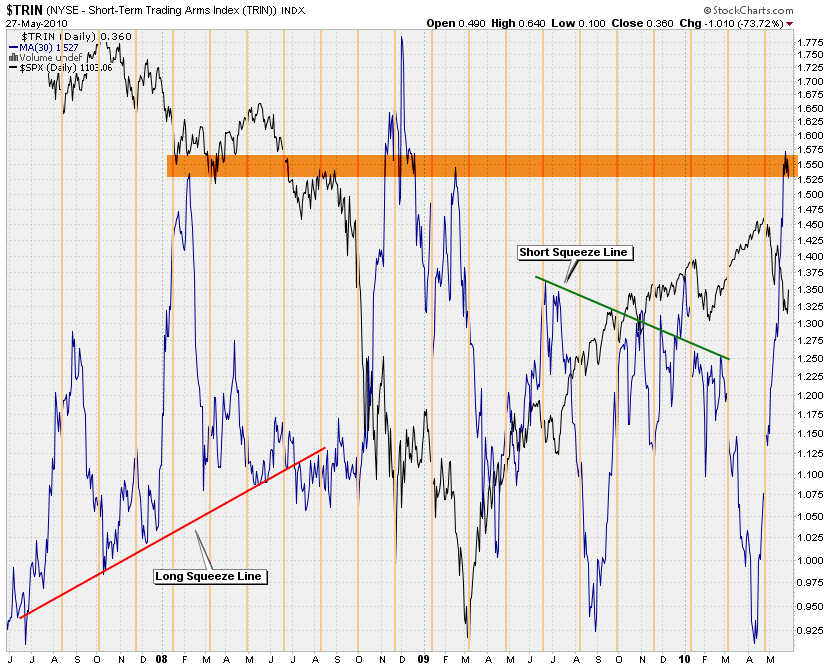 My 30-day SMA TRIN chart – we are at extremely high levels now. Yes, could have gone higher in a market-falls-off-the-plate situation but now that we painted a bottom that potentiality has suffered greatly. 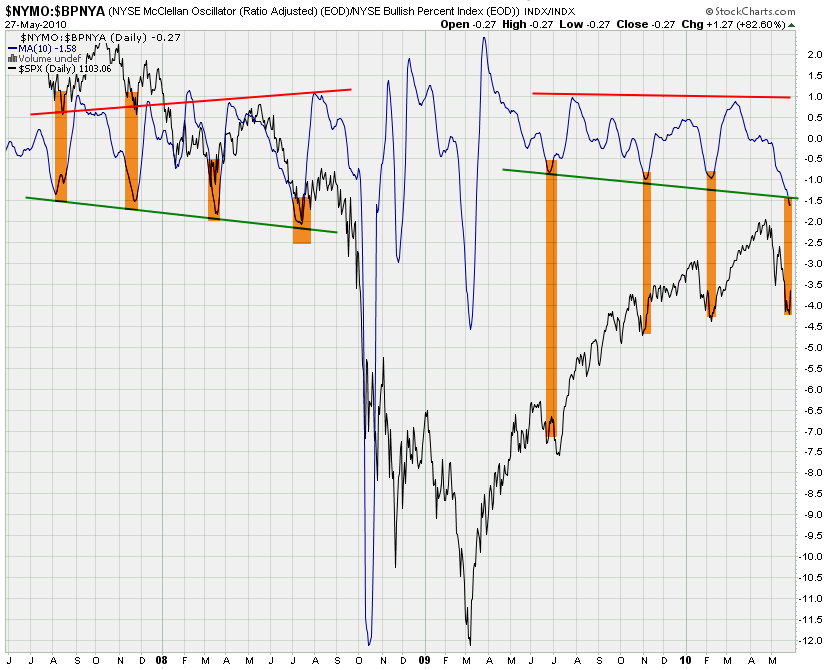 Then there’s my NYMO-BPNYA ratio chart. Also at levels we have not seen in a long time and where usually snap backs occur. 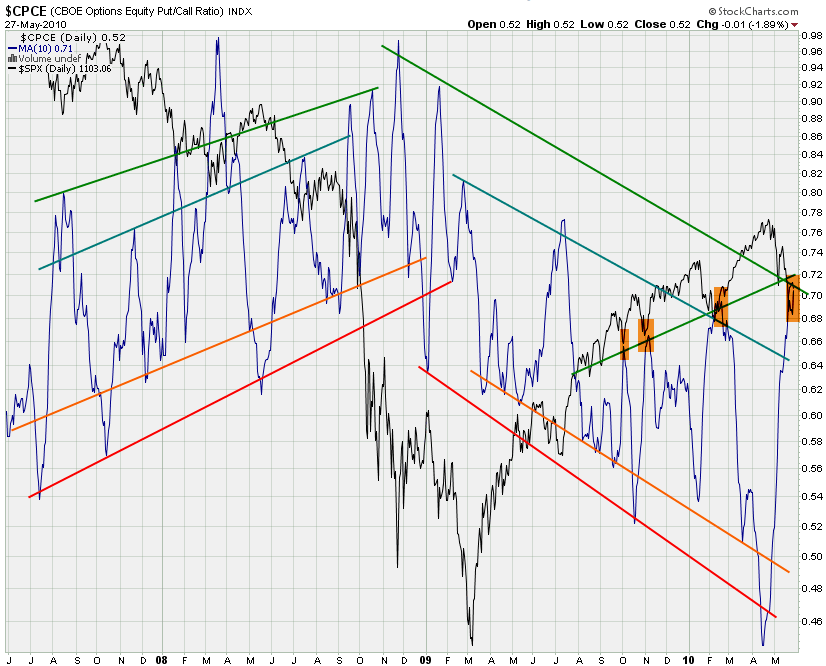 My CPCE chart – again at a cross zone where meaningful retracements happen. 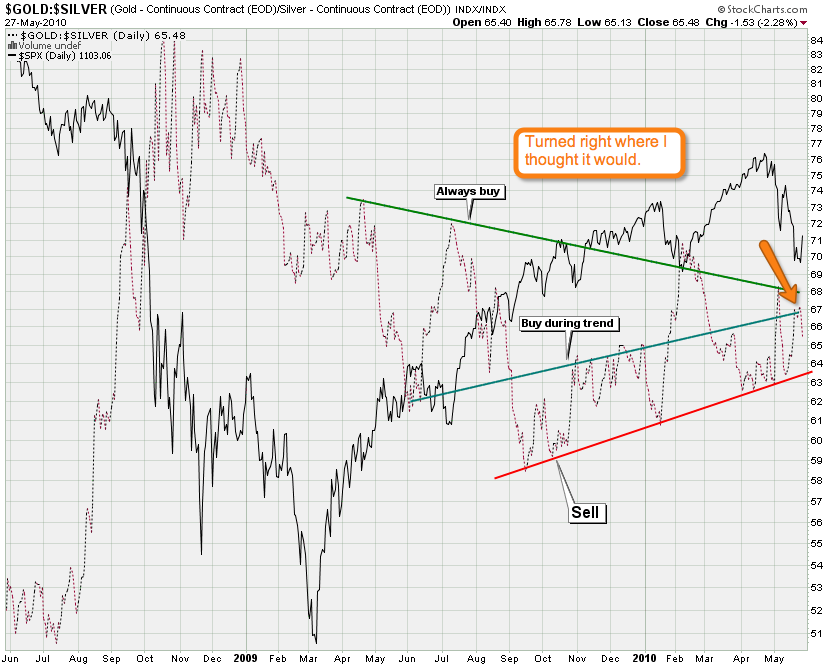 My genetically enhanced gold:silver ratio chart in the context of the SPX. I expected a turn at that center line and we got it right where I thought we would. Initially I thought we push down and then go to the top line. But that does not appear to be the second favorite scenario. Rather we most likely push toward 64 again. 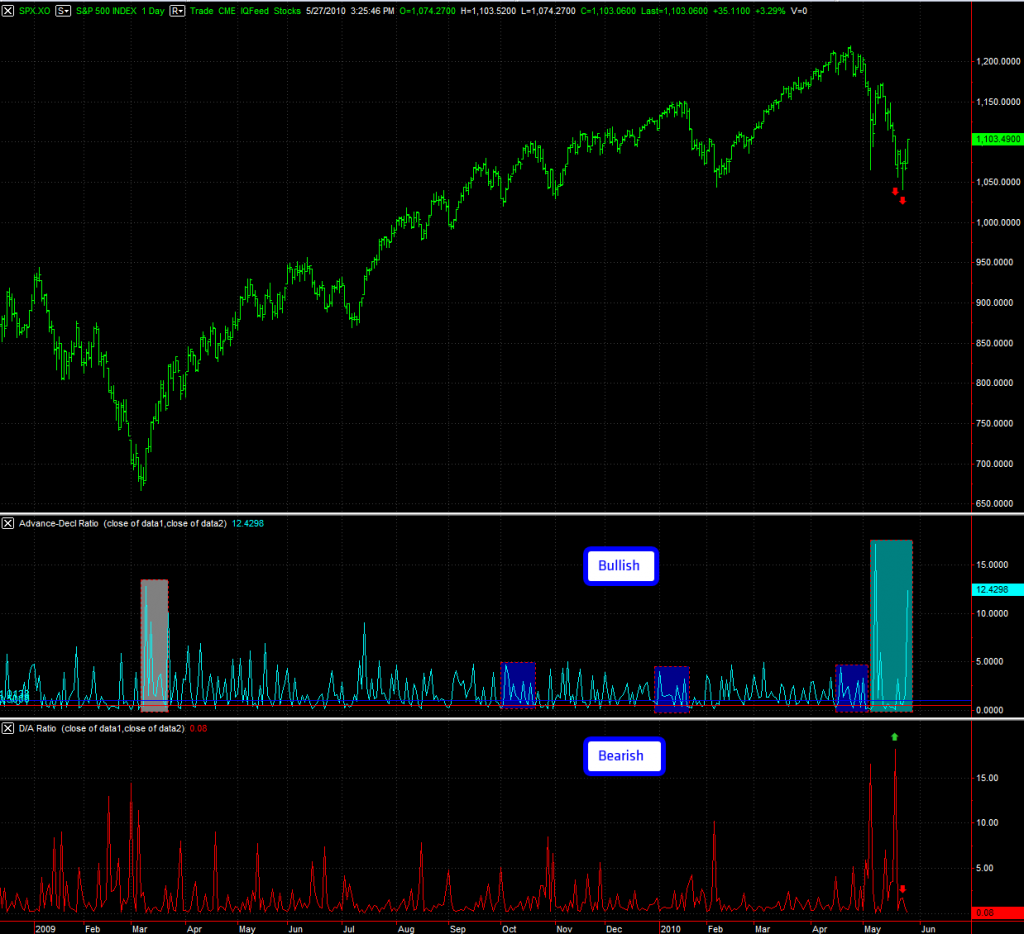 Finally, the NYSE A/D ratio chart – yes again but there is new evidence. One of my faithful ratlings named Scott wrote me today with some musings on the topic. One of his comments gave me the idea to look at the D/A ratio as well and when I saw it I immediately realized that it solved a problem I had sought to solve with the superAD (the normalized version of the A/D ratio). See the problem with the A/D ratio is that it’s very hard to see bearish patterns as the values go from 0 – 1 whereas the bullish signals go from 1 to who knows where – we recently saw a 17 reading and today’s bullquake presented us with a 12.4 on the Richter scale.

The superAD fixed that problem but it was not a viable solution as I had a hard time recognizing patterns. The solution was to look a both – the A/D and the D/A ratio. This way it’s much easier to determine bullish as well as bearish patterns. As a matter of fact – many of them resemble each other and I’m going to have a fine time parsing for more in the future.

Anyway, what’s immediately salient on the D/A ratio is the monster divergence between the 5/20 drop and the actual final low on 5/25. On the A/D ratio it’s very hard to make out but it’s crystal clear on the D/A. And of course you all can guess the possible implications here. Rest assured that in the future we won’t miss these things – unfortunately it’s a bit late this time around. My bad and I’m being punished along with the rest of you.

Call me masochistic but I’m a fervent proponent of the idea that pain and suffering is very productive and should be embraced. Had it not been for this little whipsaw I would have not tried the above. So, my puts suffered a bit but I gained a lot of very valuable knowledge.

Finally, there is another piece to the puzzle and it’s the daily Zero. But I cannot post that here – it’s in the prior post and it’s also extremely interesting – Zero subs know.

Alright – that’s a lot more than I wanted to post, so I’m off. See you on the other side.