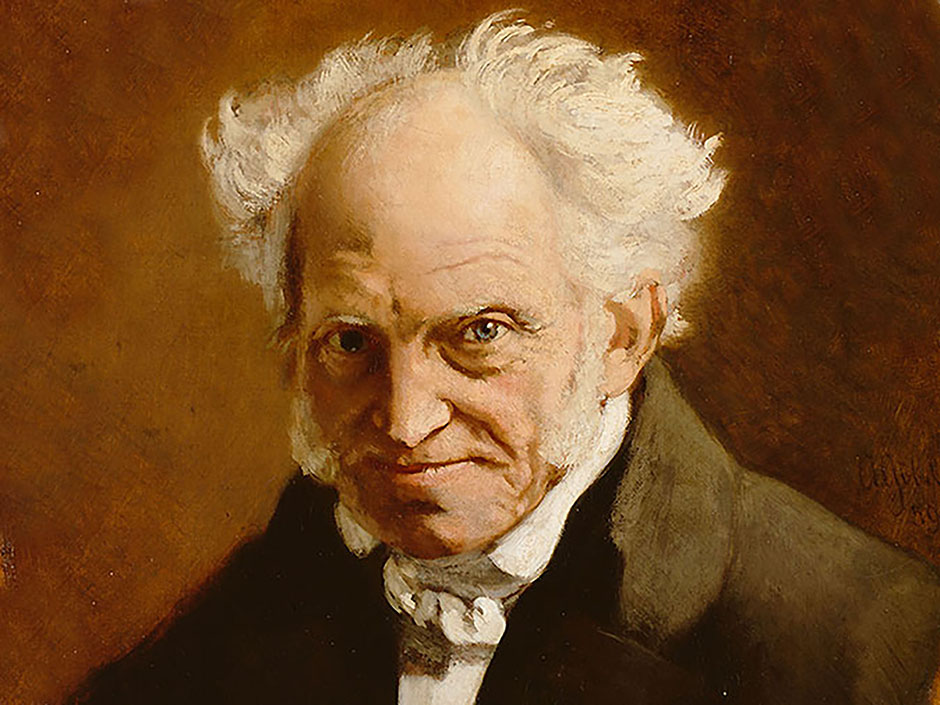 If I had to name the number 1 mental hangup that is preventing retail traders from being successful traders then it would be the constant need to be proven right. It’s a pernicious mental trap that has wiped out a many trading accounts. Unfortunately just like gravity or bad customer service in Spain I don’t see this changing anytime soon. And don’t think I am excluding myself either – quite to the contrary.

Imagine for a moment you run a trading blog – at least partially for a living. You’ve made good calls, have accumulated a trusted audience over the course of many years. At least in your small niche you’ve carved out a solid reputation for yourself.

Now let’s say you put up a series of posts chock full of convincing arguments that the market should be taking a tumble in the near future.

Your analysis covers the spectrum and looks at the situation from interesting angles that make complete sense. 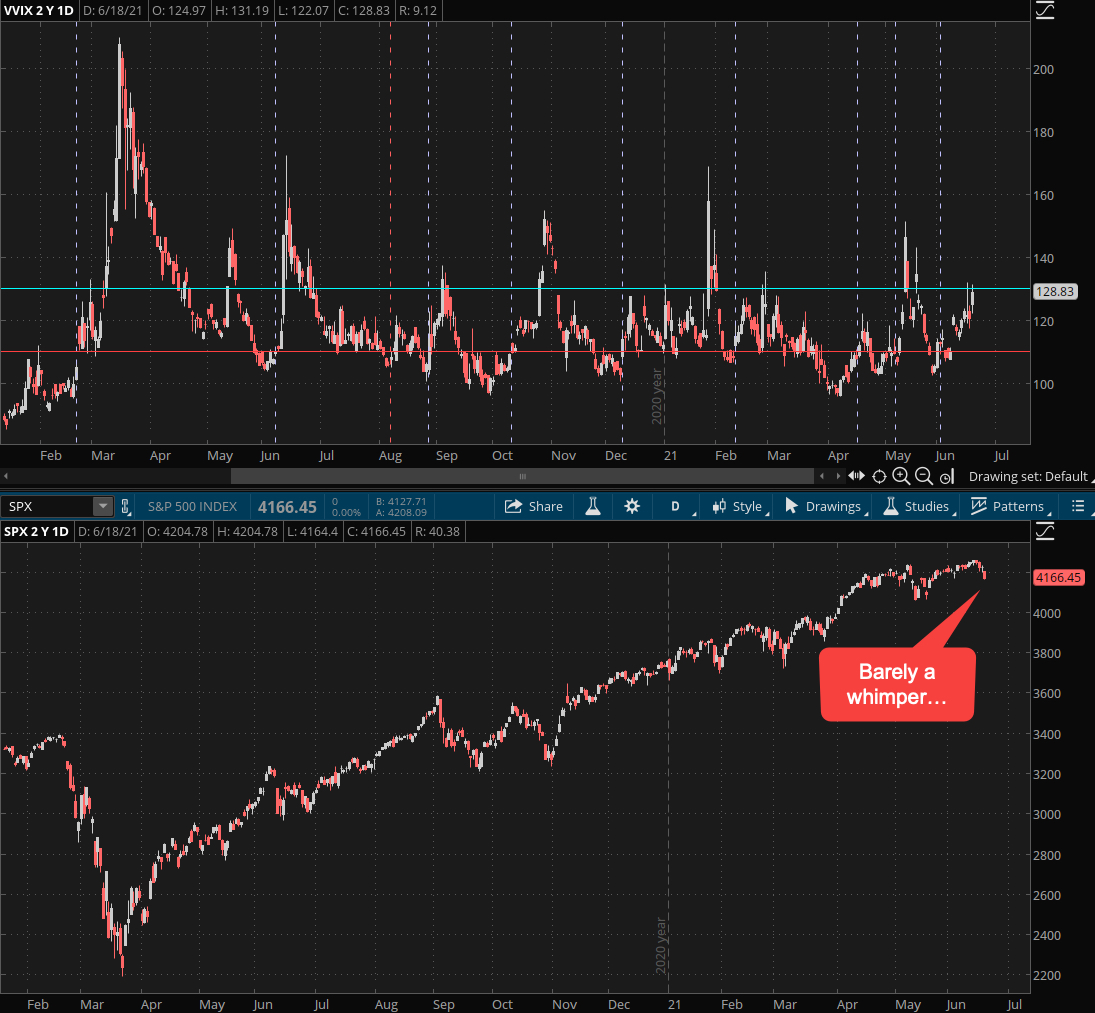 There’s only one itty bitty problem: The market isn’t playing ball, in fact it’s chugging higher on a daily basis. All the alarm sirens are sounding off but all remains quiet on the Western front.

Sure here and there you get a little wiggle to the downside but the big corrective move you’ve been anticipating for months remains MIA.

Believe me when I tell you that it’s very easy to convince yourself that your shit don’t stink. After all, if you didn’t know what you were talking about all those people wouldn’t follow you, right?

Textbook guru complex and it’s exactly what I set out NOT to do when I launched my trading blog back in 2008. The idea was to keep it real, ignore the noise, and stick with the charts.

Sounds good on paper for sure, but it’s really hard to do, especially on a long term basis.

Fortunately this isn’t my first merry-go-round, meaning I’ve long left my ego at the door or I wouldn’t have survived for nearly 13 years in this chosen profession.

What I learned many years back is that BEING WRONG isn’t really the issue at all, nor does BEING RIGHT really matter either that much (okay it helps). Nobody makes spot on calls all the time, even the best get it completely wrong every once in a while.

What IS the issue is embracing the fact that price action cannot be predicted. It can be anticipated to a certain extent, you can prepare for the most probably scenarios, but in the end price does what it does.

And what really matters is what you DO when things move – either in YOUR direction or in the OTHER direction.

I know this sounds rather trivial but ponder on that thought for a minute and you’ll realize that I may just have shifted your perspective by an inch or two.

So back to the current situation at hand, let’s see where we are and what inspired this post in the first place. 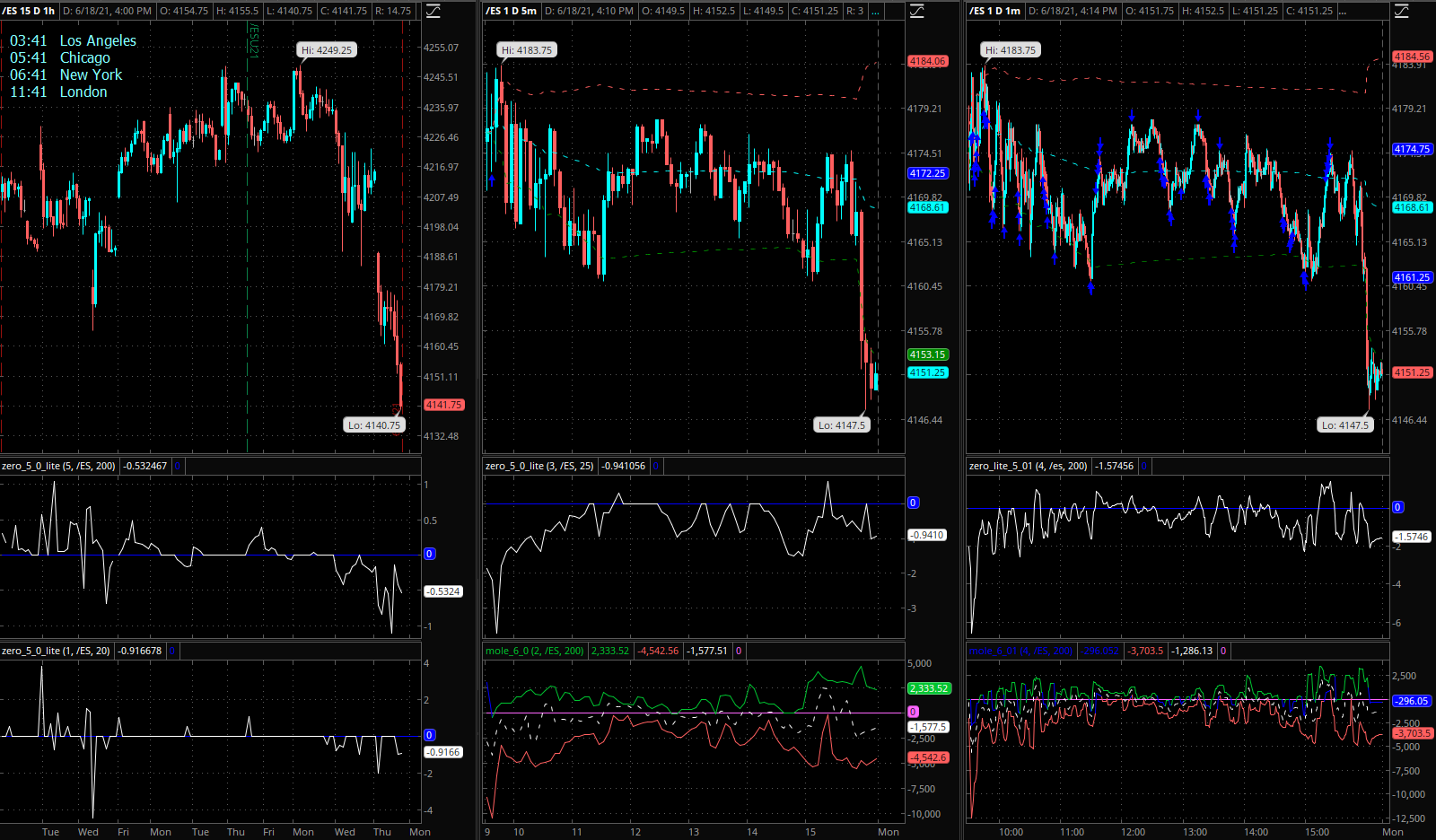 So what do you know! Some downside action after all!

But in the big context of things and given the prospect of higher interest rates it’s noting but a small wiggle. The Zero signal didn’t even push < the -2.0 mark, and all I’m seeing here is a little early summer shake out. 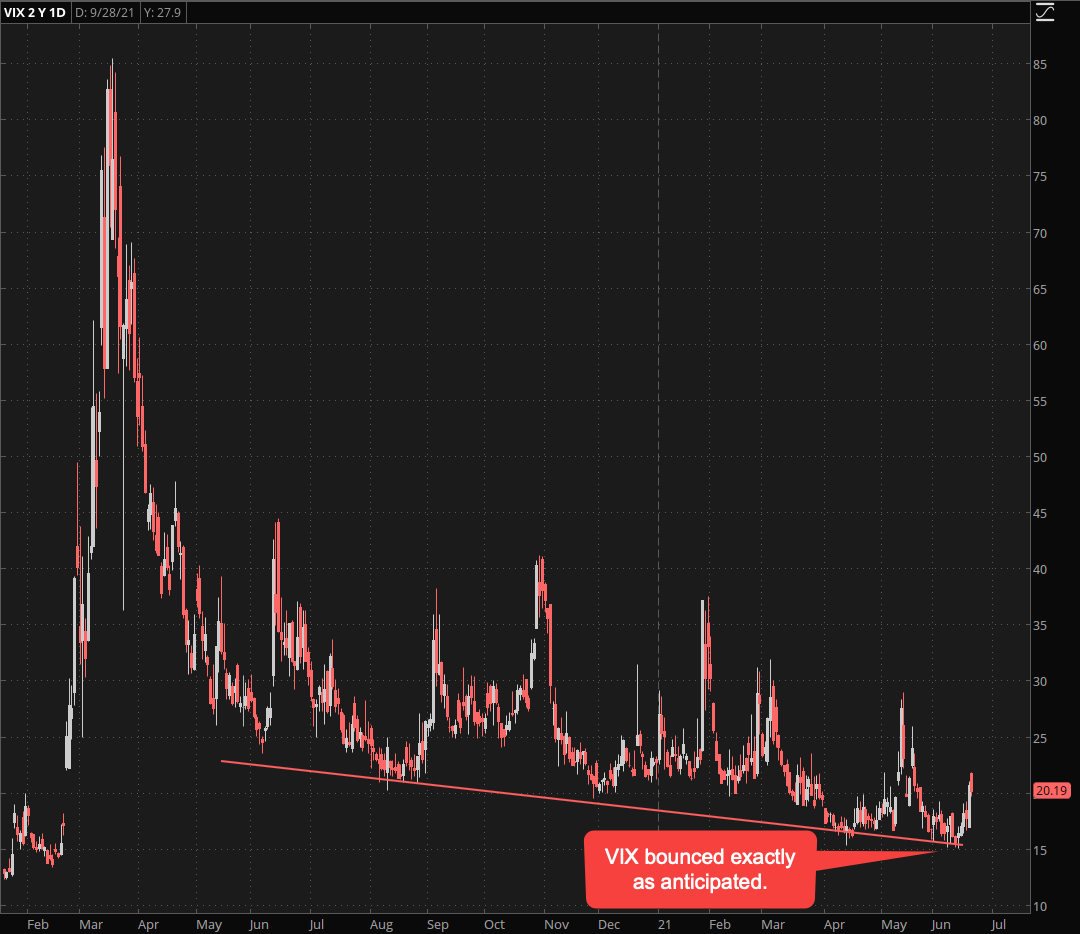 The VIX bounced up as anticipated – so I was RIGHT.

But you know what, BFD – I’m right all the time. So what has this jump in IV done for us lately? Well let me show you: 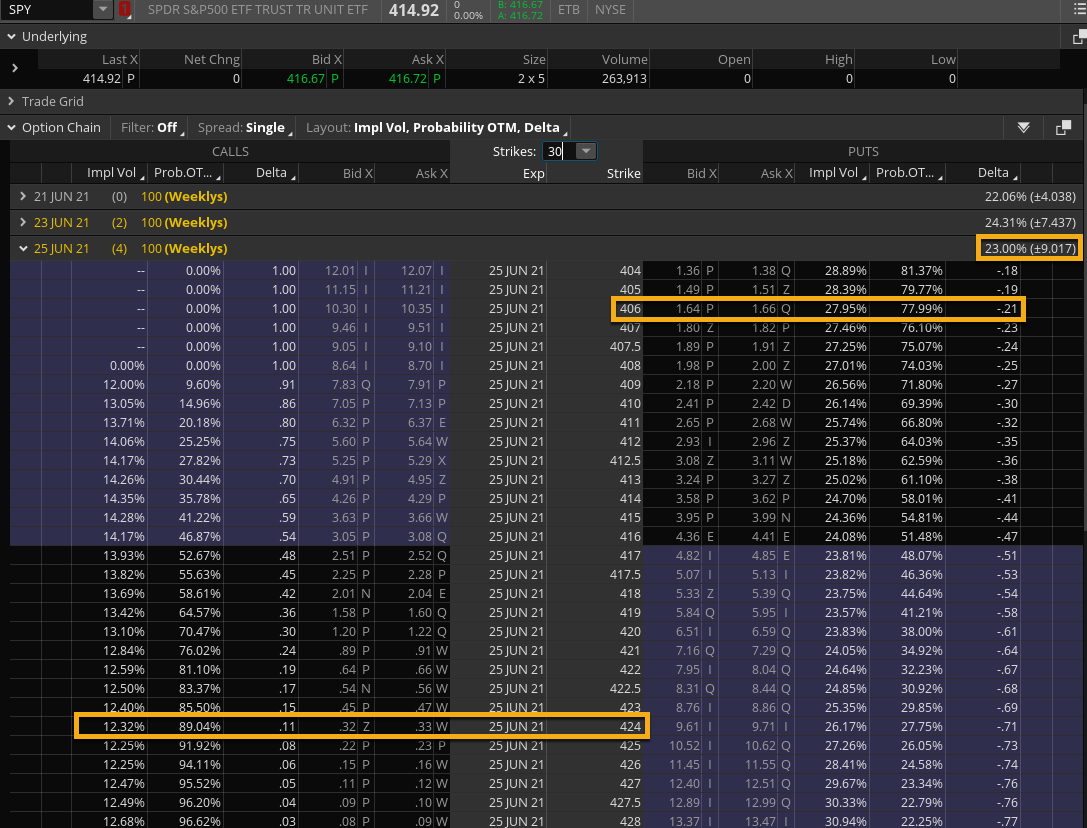 Here’s the SPY June 25 contract today – take a peek at implied volatility which I’ve circled. The current weekly EM range is 9 points or 90 handles on the SPX. 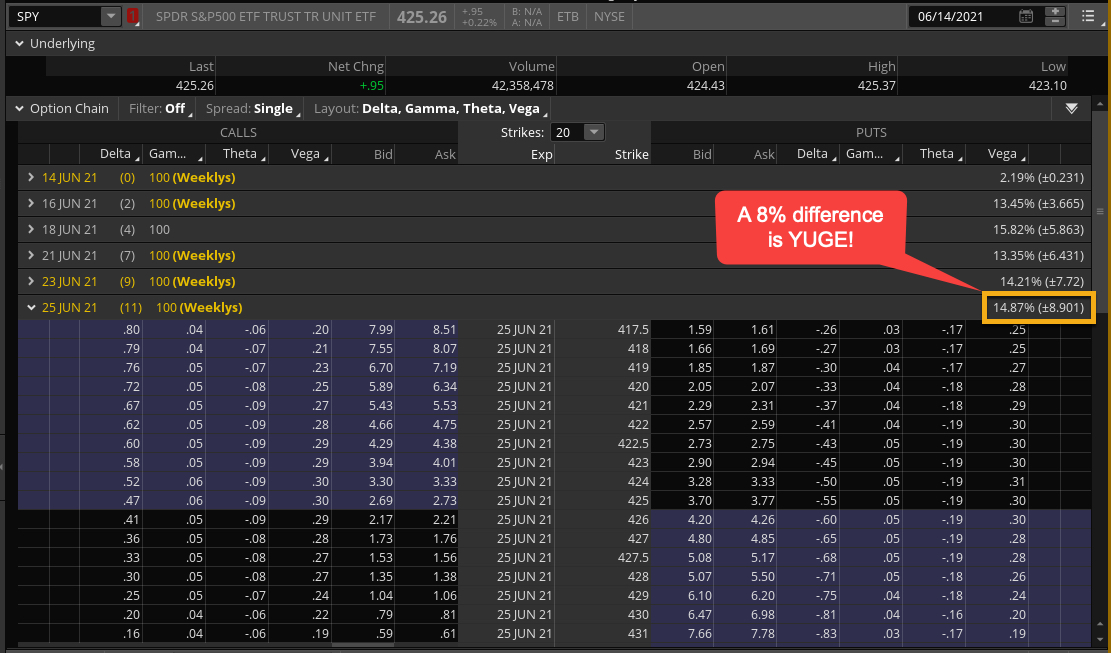 Now here’s the same contract exactly one week ago. Note the difference.

Make no mistake, a jump in 8% is HUGE!!! Just look at the premiums, e.g. the ATM calls and put which both roughly add up to the expected move of course.

And as noted in my post last week, SKEW is off the charts and expanding. If you’re not an options guy all this stuff may make your head spin. So let me straighten you out.

It’s very easy actually and I can put it to you in one sentence: Options sellers are charging a large premium for OTM puts at this point, which means that major market participants are pricing in a hell of a lot of downside risk.

The sticky point for me however is this: Is this a FUD inspired money grab or is it for real?

Now THAT I am able to answer because at this point, despite the summer lull, the writing is on the proverbial wall: