All Eyes On The Dollar

Aloe Blacc sums it up nicely – although I think he needs to change those lyrics a little:

And if it can’t find a bottom, would you share some yen with me?

Let’s not kid ourselves. The whole equities game now clearly boils down to this simple formula:

Well, there you have it. You may have noticed the last part of the equation, which implicitly indicated that a stabilizing or even rising Dollar does not necessary mean that equities will be the ones doing the plunging. Scott often talks about ‘escape velocity’ which I find is a very apt way of describing a situation when momentum becomes self feeding. But that’s only one side of the coin. Consider that even a sideways trading Dollar or equities over time burns off extreme momentum. And that might easily happen – let me show you exhibit A: 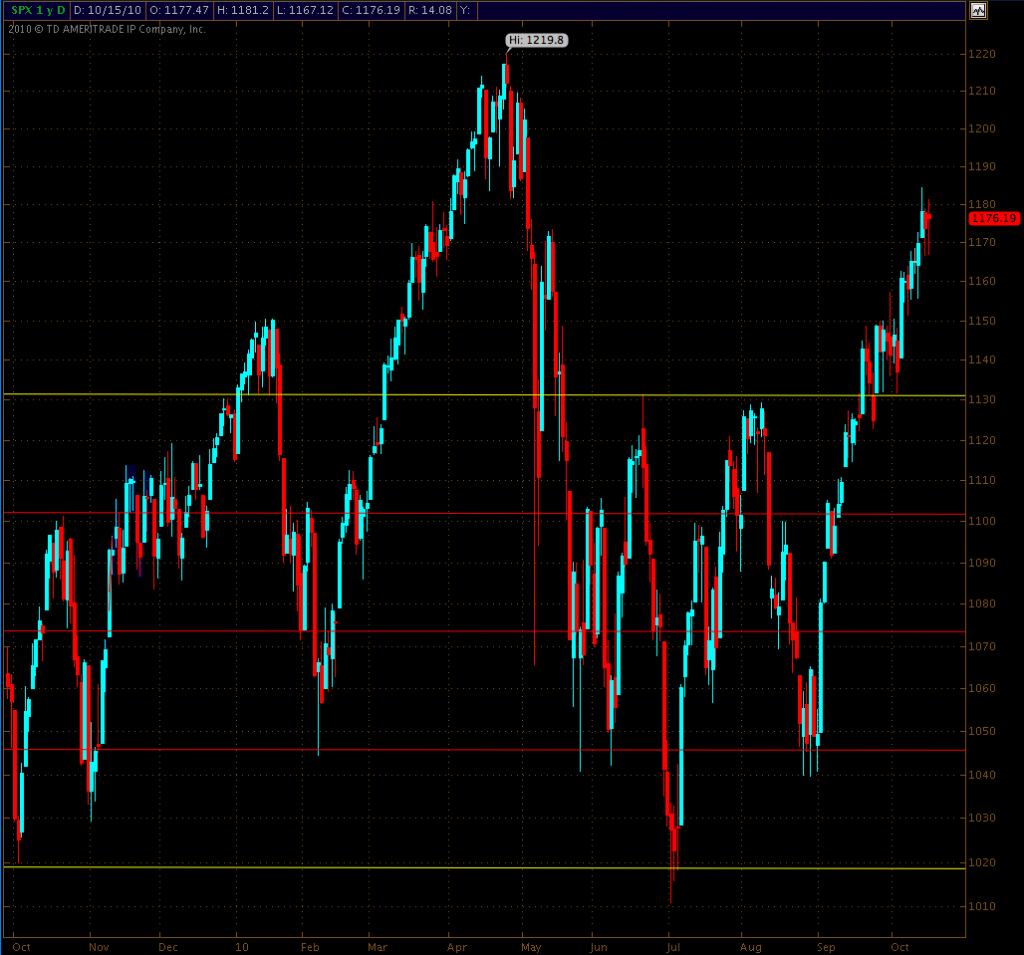 This chart proved to be extremely useful in assessing the odds of a bearish/bullish continuation on the way up. Each quarter increment higher represented an increase in the odds that the bulls would be able to breach that six month channel – which of course they eventually accomplished. Now this chart represents a cluster of support that the bears would have to slice through. and considering the inability of being able to resolve a very distinct H&S pattern (for the second time in a year I may add) it’s doubtful that we’ll see anything exciting for the bears, short of a miracle gap down. The latter we cannot anticipate or bet on – so it’s a non-factor. Waiting for Godot is not a trading strategy.

Just like last weekend none of my long term charts have really changed that much and are not worth repeating. The VIX sell signal confirmation on Friday was an ace for the bears but even that will most likely not lead to much unless the Dollar can find a bottom. So, let’s see if our DXY chart has any pearls of wisdom to offer: 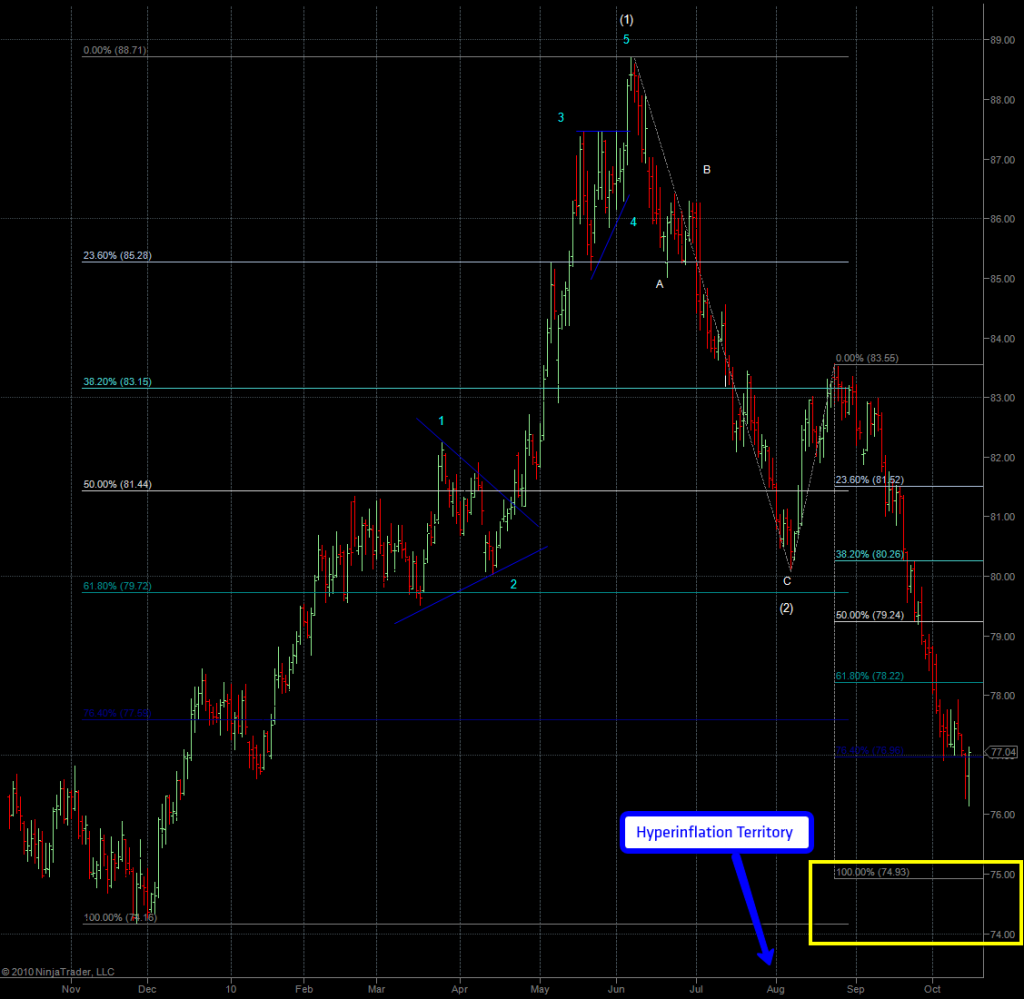 Yes, we got another green candle up and that’s all good and dandy. But unless I see another green candle Monday followed by at least two more the 75 cluster is starting to look like a potential floor. And as the chart indicates – if that one gives – well, then we could find ourselves in a situation in which we see one final slide to the downside.

Isn’t it fun to watch your currency being destroyed while house prices are being artificially floated? Also, expect commodities/gasoline/food prices to literally explode overnight – should we see this bottom go. If you think I’m exaggerating just look at the chart above: This summer the DXY trades near 89 – now it’s at 77. That’s a drop of 14%! So, while bubble TV debates whether or not Christine O’Donnell is a witch the value of your savings has been eroded by roughly 1/7th.

Now we may look forward to a bottom here but that doesn’t mean it will materialize itself when we want it, oversold conditions or not. The race for mutual currency destruction is on and Ben Bernanke just pushed the nitro button. 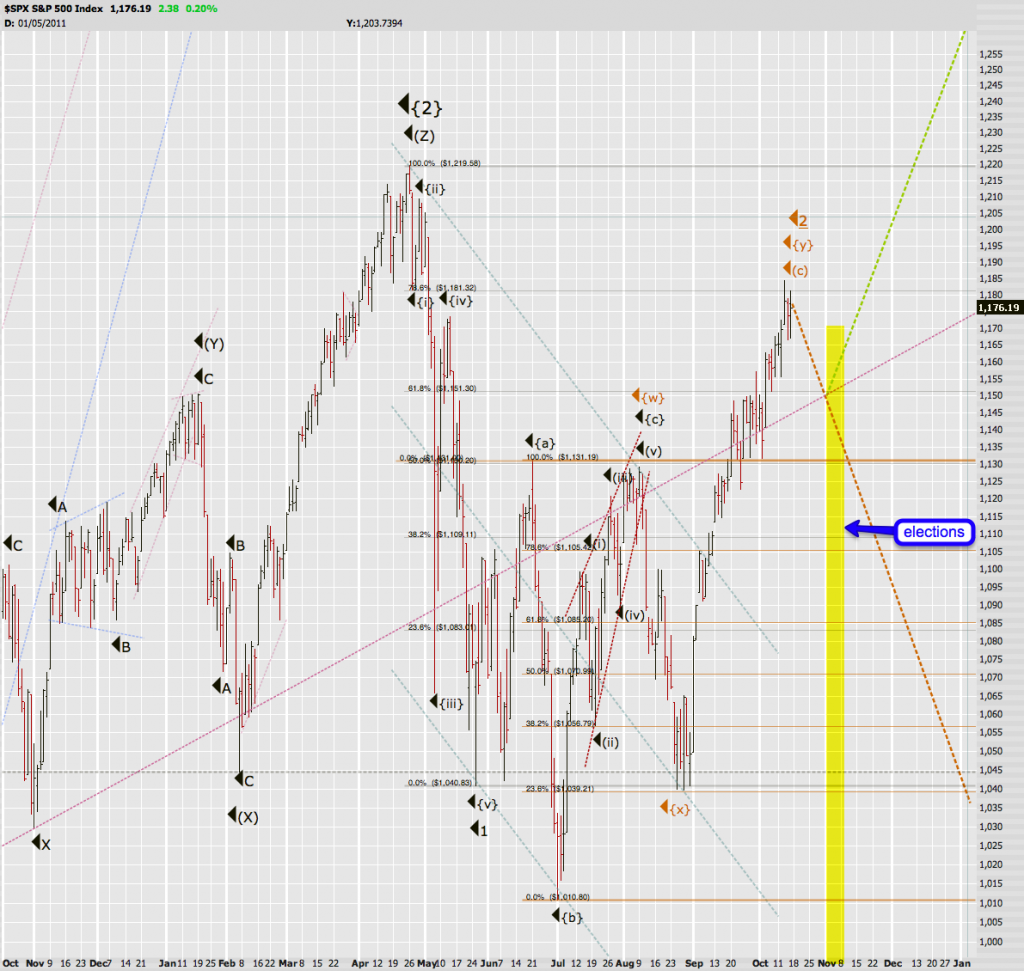 As expected we pushed toward the 78.6% fib line – the bears’ last stand. The VIX sell signal leaves about one week for a reversal to occur and that gives us enough time for a quick dip, followed by a ramp right into election day. Even if we embark on Clockwork Orange the bears will find themselves in support zone hell and barring an exogenous event that somehow triggers a banana peel Kodak moment in equities I don’t think we’ll see much fireworks ahead of January. And then there is that cluster of POMO cash scheduled to flow into equities throughout the next few weeks all the way leading into the elections. Finally, right after the Dems are done getting their asses kicked we’ll be close to the seasonal Santa Rally. Yes maybe this year is an exception but how often have the bears gotten a break in the past eighteen months? Not to fall prey to recency bias but I’d like to see one single painful support zone being sliced through before I am able to bet on red again.

Soylent Green leads us above this year’s highs and beyond. How far I don’t know yet – obviously in between we’ll have some kind of correction and I would have to assess the momentum once we get there. If you want a key level that is the dividing line for Green and Orange I would pick 1130 – the top line of the dreaded channel we were bouncing around in for six months (see my first chart above). If that one gives 1040 is a long way down and the bears have failed three times to breach it.

And that’s pretty much it. No fancy momentum charts this weekend – the game is all about currencies and in particular about the Dollar right now. If you are a happy bull look at the DXY charts and then ask yourself if the loss in purchasing power is worth the gains in your stock portfolio. Well, at least you did better than the bears who got screwed both ways. Only problem with jumping on the bullish bandwagon is that it’s late in the game and that my sense of self preservation prevents me from being long a house of cards.