Anatomy Of A Missed Opportunity

Alright, ladies and leeches – we have a lot of material to go through tonight, so let’s dig right in: 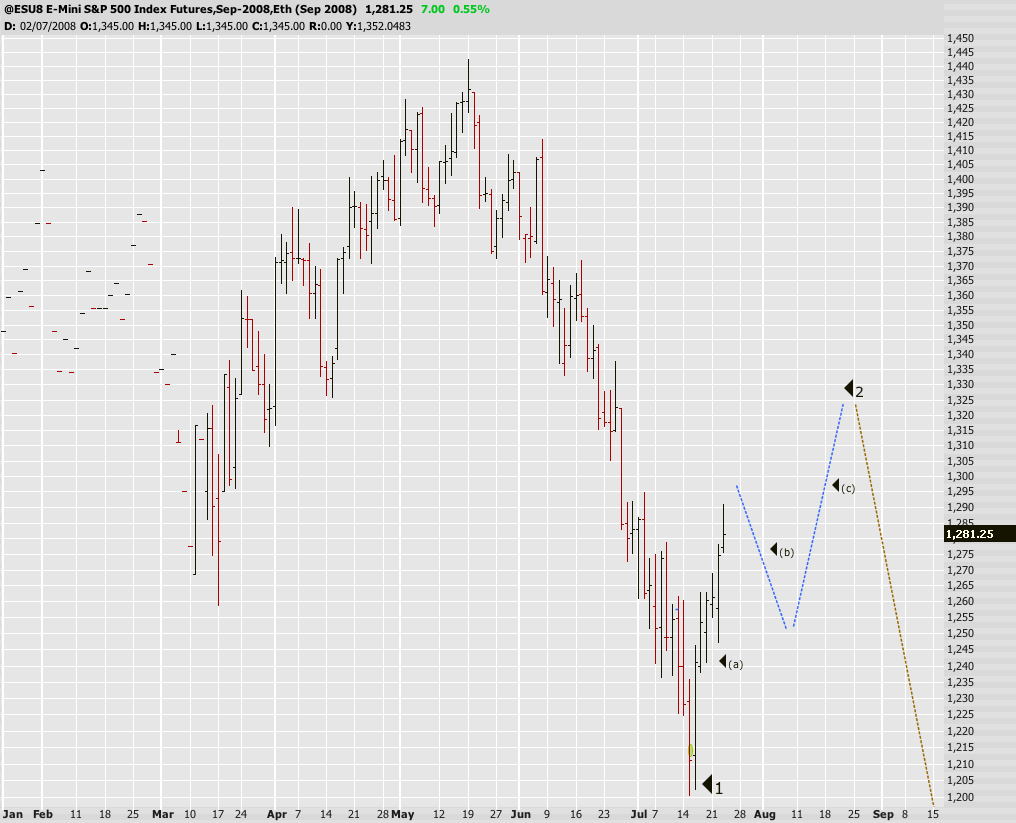 Before we cover what’s ahead of us, let’s take a stroll down memory lane: to when the SPX was still trading around 1,280 and the VIX was hovering slightly above 20 – aaah, the good ole’ days. The date is July 23rd 2008 – EvilSpeculator doesn’t exist yet but I was already churning out hard core EWT analysis like a mad monkey. The image above is one of the charts I posted on OptionAddict that day – which incidentally caused a bunch of people to complain and I was eventually told to take my sorry ass and my charts elsewhere (btw, I’m not blaming Jeff here – he actually offered me to post in a separate section). 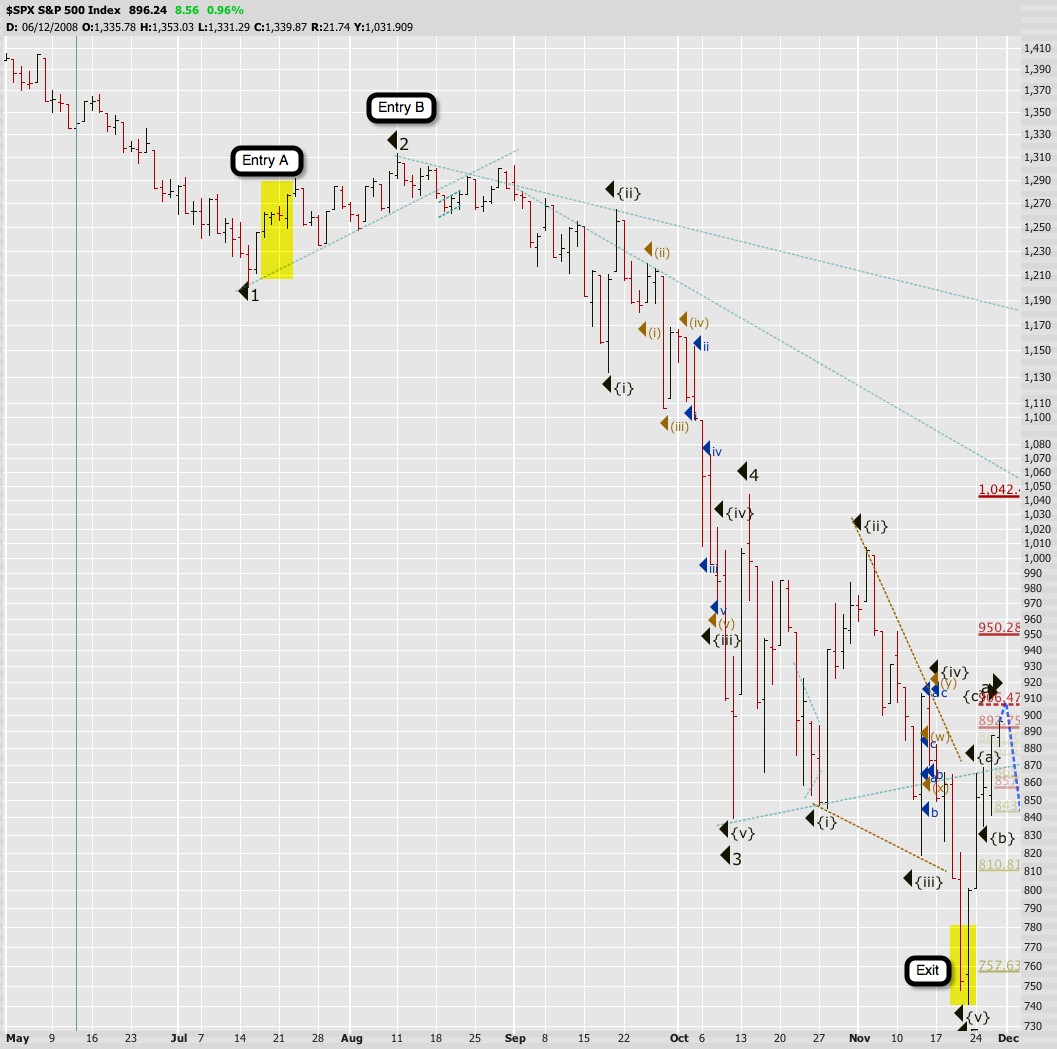 So, let’s see what actually transpired in the weeks and months after. Well, I hate to rub it in, but I was spot on, even nailed the target of (2) by about a ten point margin. Also was right about the abyss scenario I kept pimping back then. Now, I’m not posting this to gloat (maybe a little) but rather to make an important observation, and thus I expect that all of you glu sniffing steel rats pay full attention just this once. Because what I am proposing tonight is that we need to change the way we approach the market for the foreseeable future.

Fact is, we all didn’t see the forest for the trees. Why you ask? 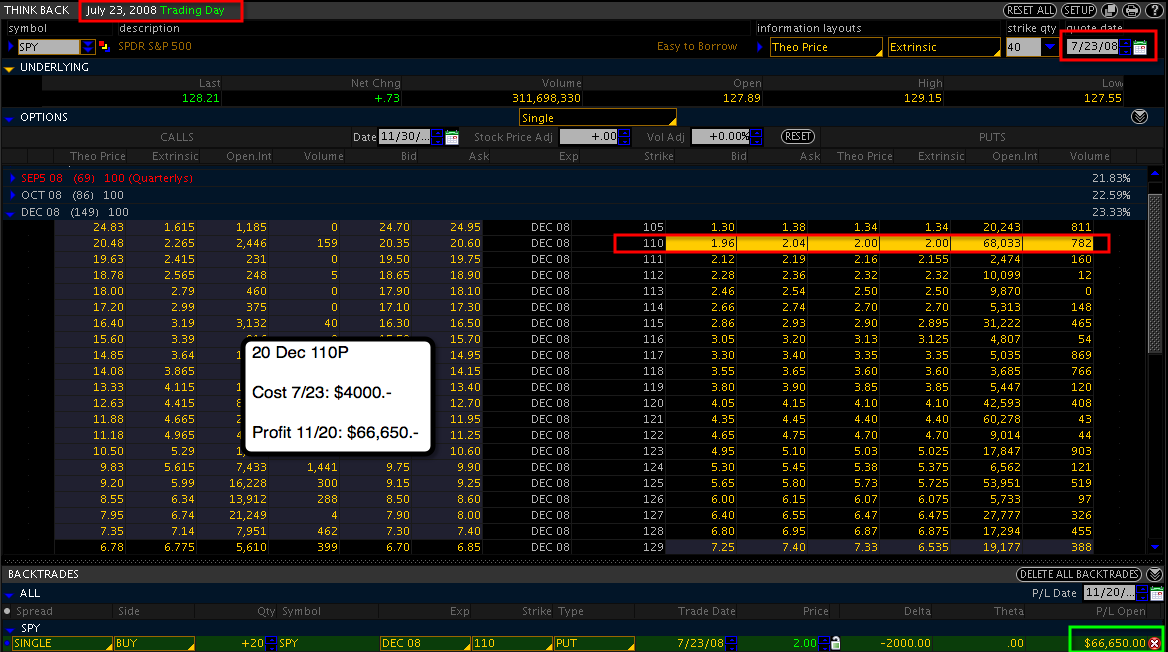 Because had I grabbed only $4000 worth of Dec 110 SPY puts that day it would have been worth $66,650.- on November 20th. Now, remember that the VIX was pretty low back then and we weren’t at the top of wave (2) just yet. Therefore, it gets a lot worse. How about if I would have bought those same options three weeks later when wave (2) actually peaked? 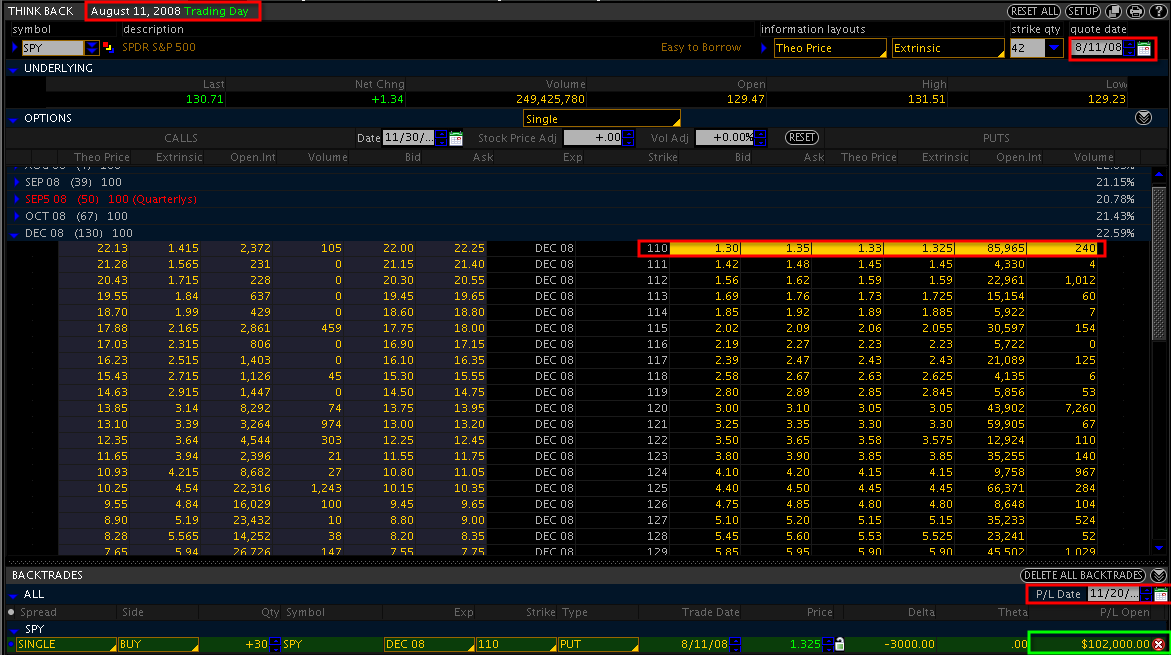 I know – coulda – woulda – shoulda. But the sad fact is that the market did exactly what I expected it to do. And although I made fine profits in the last few months it was emotionally taxing and a boatload of work, especiall considering all the interventionals, the drama, the sharp counter rallies, etc. I got into literally hundreds of trades and also paid a nice chunk of commissions.

Now, something tells me that I wasn’t alone in screwing this up. I actually would wager that everyone reading this has been in the same camp – jumping in and out of the crazy tape of the past few months and having relatively modest profits to show for.

BTW, for the record – I doubled my account in the last six months, which is okay. At some point I was up 300% but then came that notorious short sale ban on September 18th, which got me back to where I started. Doubled my account again since then, so I should be satisifed with my trading performance. Maybe, but when I look at those numbers above I just want to puke.

There’s this thing about me – I’m might not be a genius, but I always learn from my mistakes. And knowing what I know now, and also knowing that the PPT is basically out of bullets, except maybe for their relentless use of their printing presses, I would like propose the following.

Screw the daily drama and let’s focus on the big picture!

Now, let’s talk about the future and how I see it: 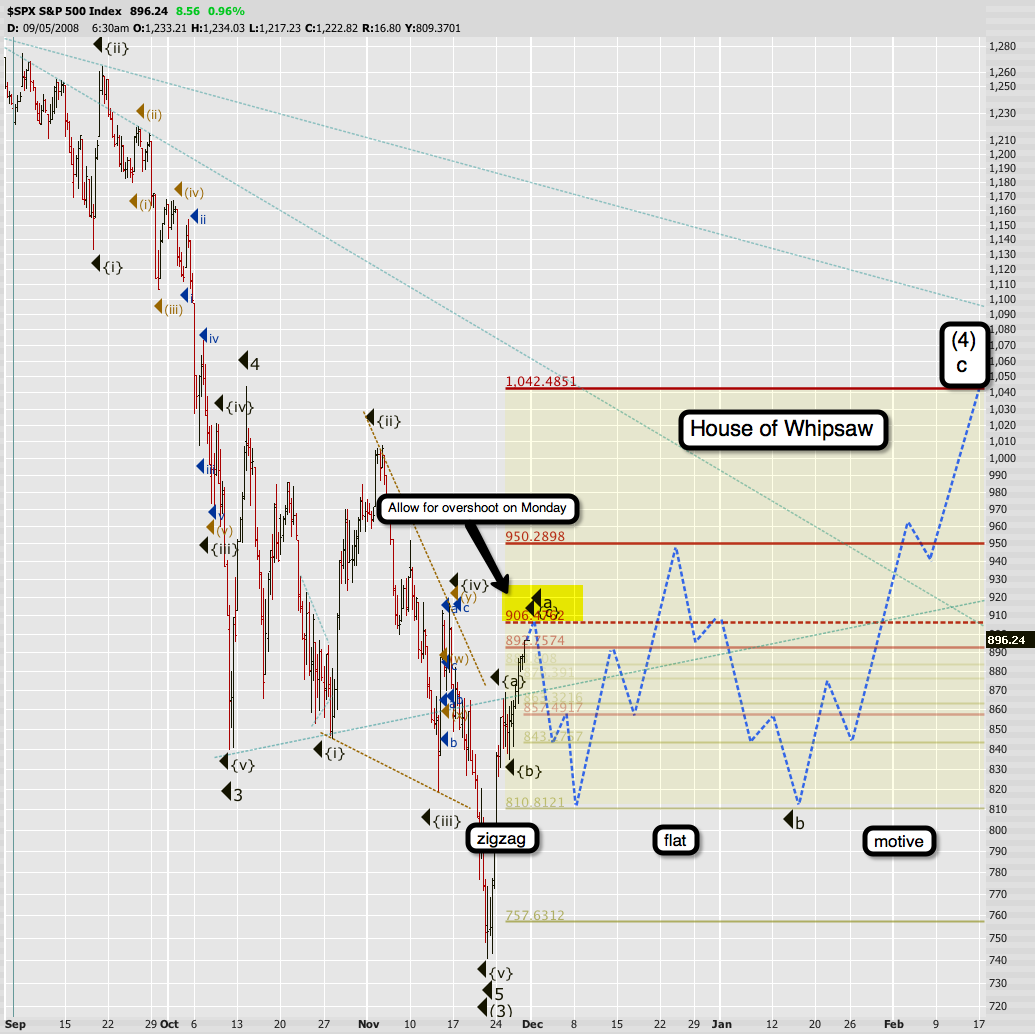 I’m going to spare you the usual market overview – not going to talk about the NYMO, the Bullish Percent, the TNX, and all that other jazz. We all know this market is heavily overbought and that the breadth was super bullish last week. We had five consecutive up days and this has not happened for a quite a while. We are all salivating at the chance of shorting this market, but I’m not going to touch on that. This is what I’d like to reserve for the intra-day updates which we’ll post in the coming days.

If you look at the chart above you’ll see type of tape I am expecting for the coming months. When it comes to corrective waves there are two primary elements that need to be satisfied:

The price correction is something Elliotticians usually nail pretty accurately because the rules are well defined. I’m not saying we always get it right but we usually get close enough. What’s important to understand right now is that a wave 4 typically ends within the price range of subwave four of 3. I know you’re all scratching your greasy skulls right now, so I’ll just throw it out there: Our price target for intermediate wave (4) is between 1000 and 1040 on the SPX. Could overshoot – yeah – but if we breach 1060 I’d have to re-assess the entire wave pattern.

Now the time correction gets a bit more complicated, after all there are eleven different corrective patterns and combinations in Elliott wave analysis. But we do know that wave (2) was what we call a sharp correction. I mean, it was not complicated at all – went straight up and was done without much of a fuss. I’d call that a sharp correction. The guidelines of wave formation in EWT tell us that we often find alternations within an impulse wave. If wave two of an impulse is a sharp correction, expect four to be a sideways correction, and vice versa.

So, let’s think about this: We already pushed up like crazy last week and are more than half way through our price correction. I frankly have doubts that we’ll now just paint a nice b wave and be done with (4) just in time to unpack our X-Mas presents. Probably not – what we’ll see most likely is a complex sideways pattern not dissimilar to what I’ve draw on the chart. There are dozens of scenarios that could play out, and I’m sure everyone has their favorite. But let’s settle on the fact that it won’t be a quick one and it it’ll probably drive us nuts all the way through winter.

Hence, what I’m suggesting is two-fold.

Now, before I return to my pillow fight against the Swedish Mud Wrestling Team I would like to point everyone to a new market trend indicator I posted last week while most of you were passing out on tryptophan. I call it the zero and it’s my very own evil creation.

There’s also a handy little widget on the right sidebar which should get you there from any of our daily posts. The page reloads itself every five minutes, which is more than enough to keep you up to date (it’s a medium term trend indicator and it’s configured for a hourly chart). There’s also a handy tutorial, which I strongly recommend you take a look at before you send silly questions my way. I think I’ve covered the gist of it but if have left anything out please let me know.

The zero is going to be freely available until early January. Call it a large scale acid test – if it can continue calling the trend reversals as it has in the past few weeks, then I will be available on a monthly subscription basis after the free test period. The fee will be fairly modest and should pay for itself within a single trade, so even you bum leeches should be able to afford it.

Of course I don’t have to to explain what it could mean for us if the indicator continues to nail those trend reversals. Could be the antidote to many whipsaws we had to trade through – and we all know that volatility is not going to subside much in the months to come.

Well, for now it’s all yours, so kick the tires while you can.