Another day, another reversal…

I only regret that my “Take a load off Fannie” post was not on Thursday, rather than a week or so ago, but we can’t win them all.  Check out this picture I saw today that helps show how convoluted our fiscal policies were (this was drawn in the 60’s).  Amazing what insight we can have… 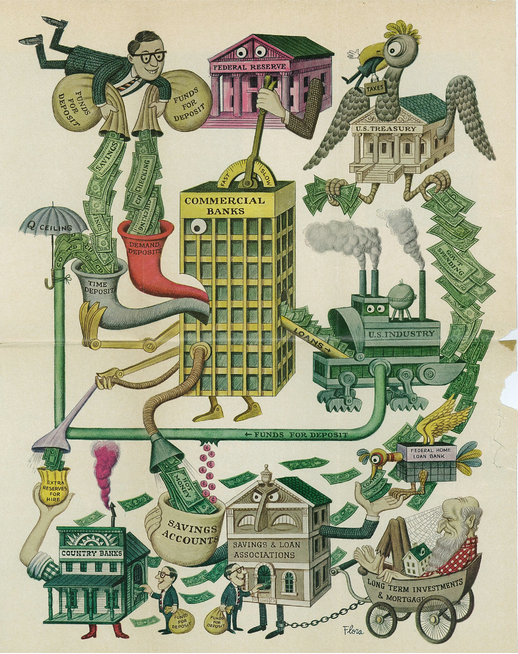 If you are not in the market, be glad, because the whipsaw action today was rough.  At this point, the trend seems fairly dead.  We have moved up and down, and back up again.  But, we all know that the largest moves up, including today’s 350 point move, complete with gap up, of which we have had 5 in the last 2 months, occur in down trends.  Very soon the markets will have chosen their fate, and we will inform you as soon as we can be certain.

Let me recap since a lot that we have talked about has happened.  First and foremost, we got a confirmed $VIX signal (I will discuss this in a posting sometime tomorrow).  The $SPX closed inside the 2.0 BB, quite far inside really.  This is a serious indication, and should not be ignored.  Normally we would expect a serious reversal, and this was a signal we were waiting for on the topside with $COMPQ.  Finally, breadth has reversed, yet again, significantly, but not too far considering our 2% ($SPX) retracement.

This is something some of you have seen frequently, and some of you may not have seen at all.  It is interesting to use, and is frequently useful (to me) around disputed tops/bottoms for a measure of resilience.  It is the New High/New Lows indicator, but not the Mclellan Oscillator.  Obviously, the markets closed up big today, and we would expect to see the swell of positive breadth and volume that we did.  We would also expect to see a growing number of new 52-week highs if the target moon scenario was to be properly supported.  Here is what we saw today.  And the second chart is what we have been seeing since late ’06.  Not a sign of a healthy market. 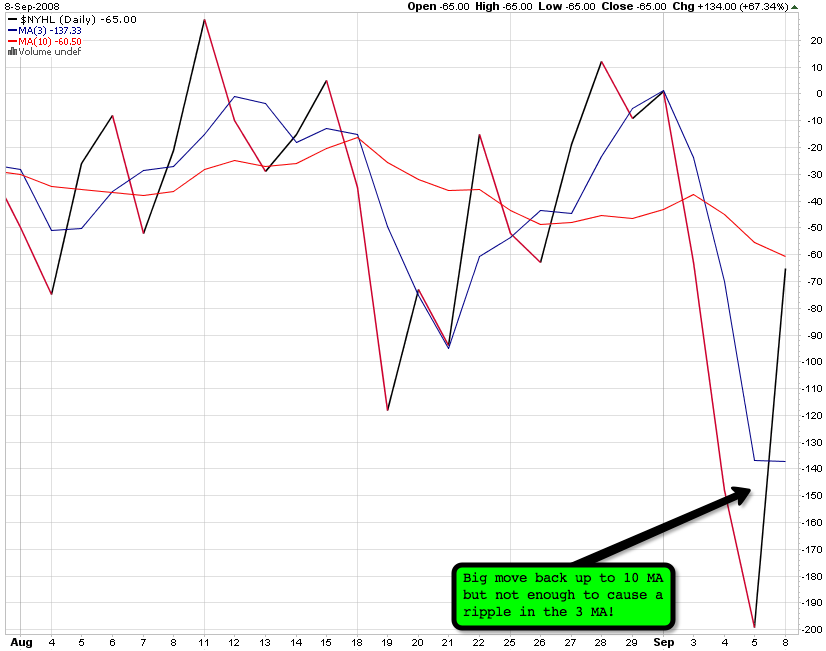 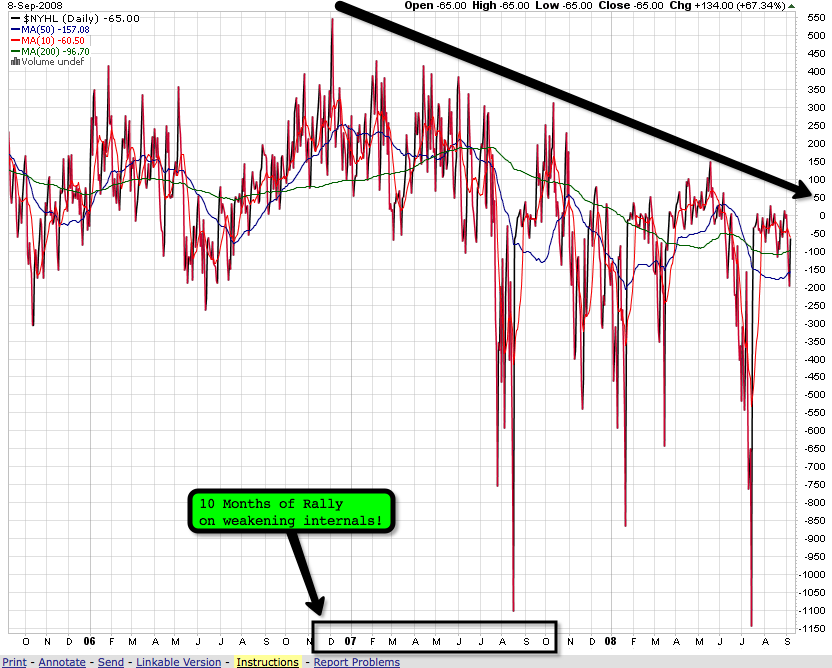 Another thing I would like to mention is from an e-mail I sent to Mole last night outlining my thoughts.  Basically, I said that this rally was on very low volume in the futures markets, and had retraced to appropriate fibonacci levels in an A-B-C fashion.  We agreed to suspend our stops, and see how the markets treated these levels.  I also asked him to look at 12-12-07.  It also depicts a day that was screwed over by government intervention.  Coincidentally, it was also towards the beginning of a wave 3, this one just in wave (1).  I was talking specifically about the $INDU, but I would like to point out the similarities in the $COMPQ’s candle. 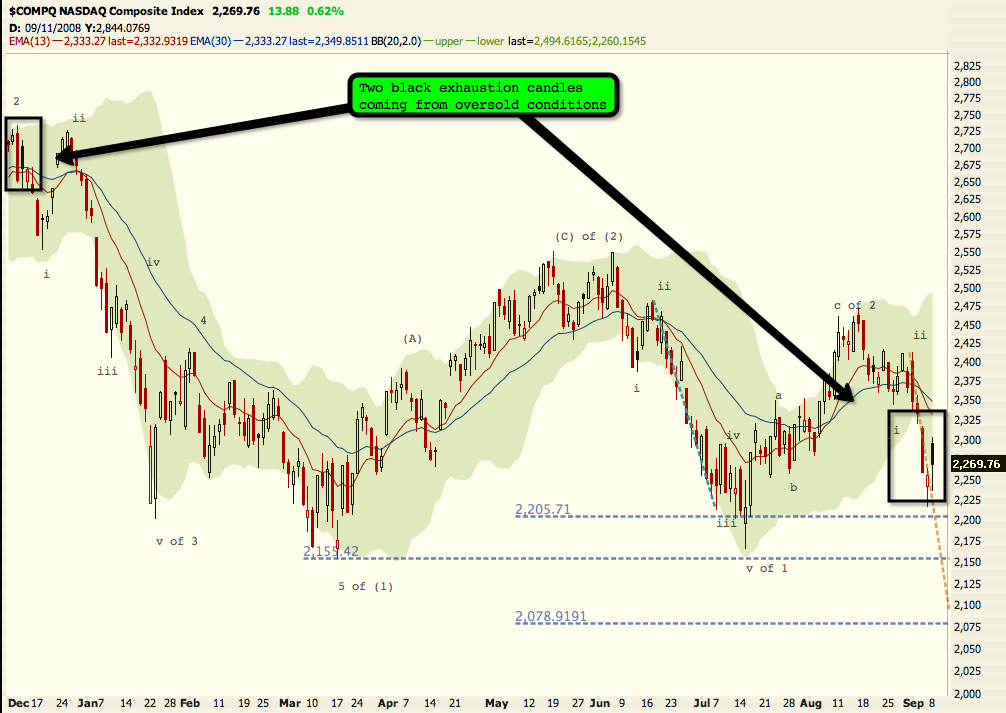 We also got a BB reversal on the $COMPQ, the $NDX however, did not.  The $NDX has fallen 10% since the highs struck days after the reversal signal.  We must respect the chance of a rally back up, but we should also recall that this type of action is common in our preferred wave 3 of (3) scenario.  This move will unravel the conventional wisdoms of the market.

If the Nasdaq indexes, which are tracing out the most clear wave patterns, were to reverse from here, we would expect this behavior to be in an expanded flat formation.  That action would move up in 5 waves into the 2030 ($NDX) range, assuming today’s lows were the bottom of B.  Here are the preferred chart count and the alternate flat interpretation.  We would expect this rally to last long enough to allow for continued selling in a later wave 3.  It could last as long as a few months, holding up until the election is past.  Obviously, breaking our March lows would allow us to eliminate this alternate count. 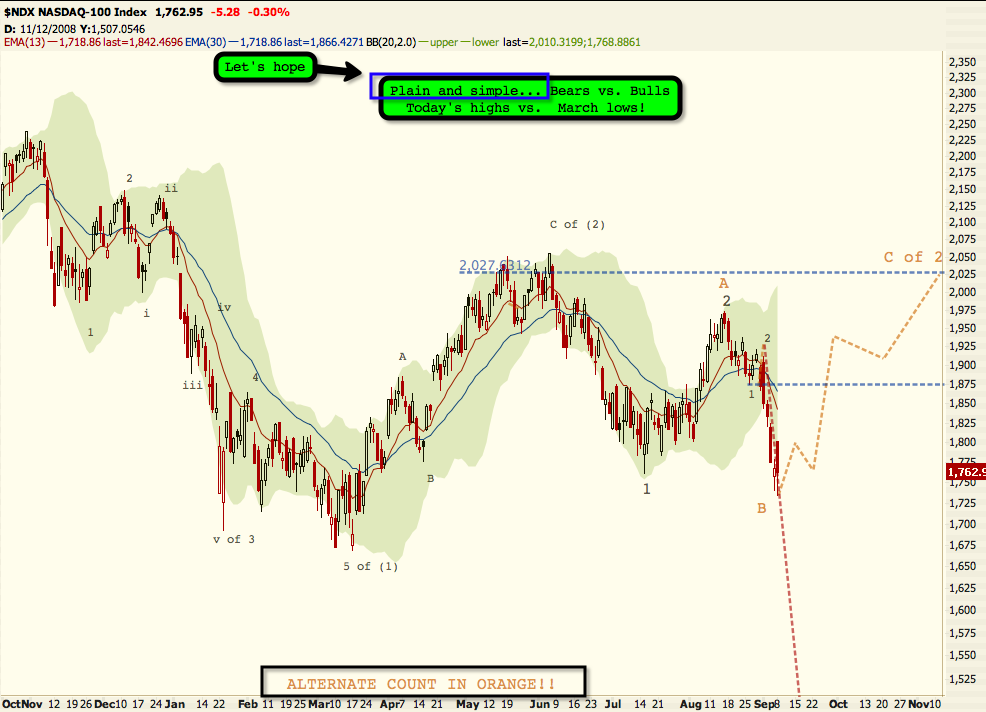 There are many things to support each case here.  We have 2% up on blue chip or a weakening tech sector which threw a full 3% reversal at one point.  We have a $VIX buy signal coupled with a BB reversal, typically a VERY strong sign.  Though we did not see the same reversal flashed in the higher beta $NDX, which put in a lower low today.  There are valid wave counts to support either case.  Long term breadth supports the bear, while the short term rally showed fervor today.  The bulls have Beanie.  The bears have real life and the government.  That said, I will return the short term indicator to mixed, because frankly, who the hell knows?!?

I would like to talk about a few of the picks I have thrown out over the past week and gauge their performance.  Some of them, LFG, MBI, GCI, didn’t get taken, or got the axe.  But the select few that made it through were leading the way.    GOOG was behaving like a champ today, and helping to drag the $NDX back to where it belongs.  Get some if it bounces. 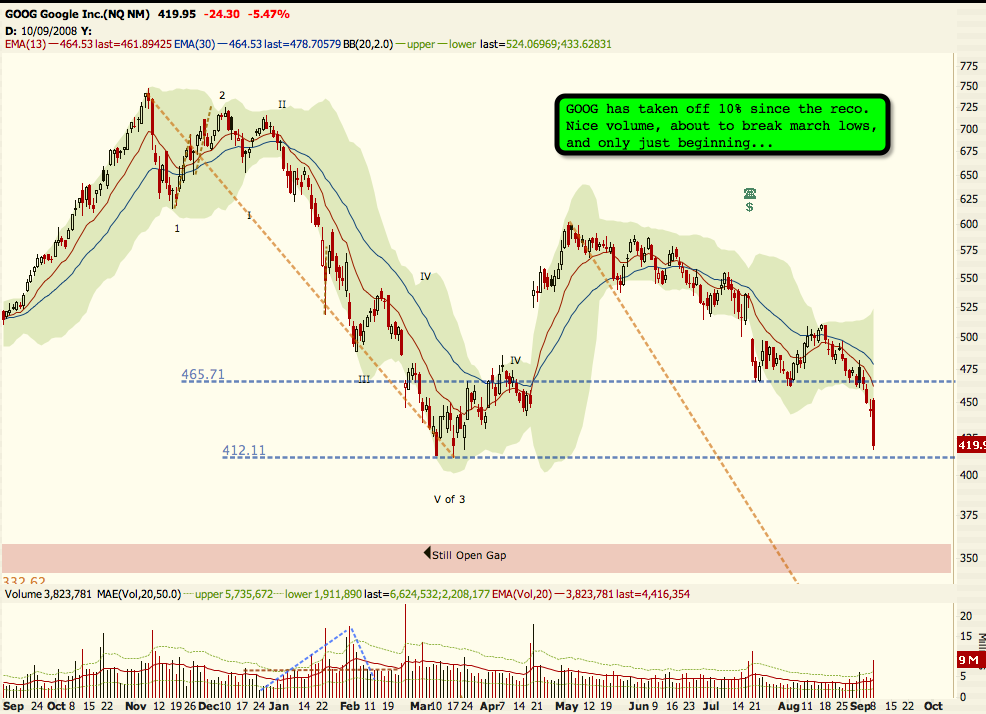 BIDU has dropped 90 pts (at lows) from my initial entry, and nearly 20% (60 pts) from our early reco.  Big volume on the exhaustion rally candle today.  A potential triangle would be targeting the 230 range, and we have found new resistance around 285. 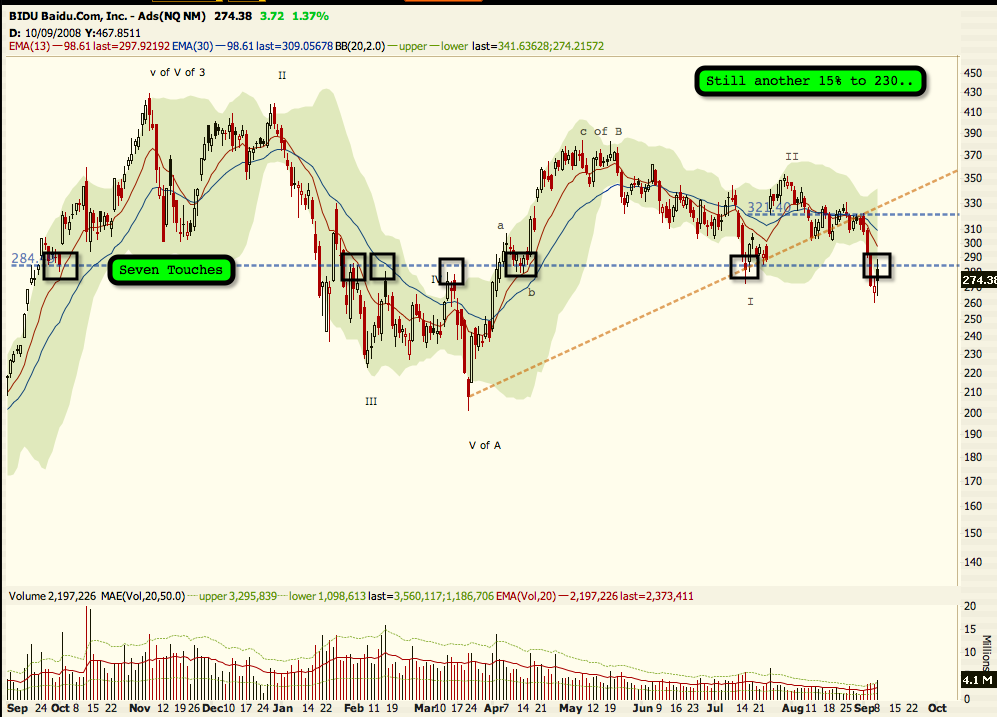 FSLR needs to break through its gap resistance (illustrated by purple) before we can target 175 or 150.  Both have nice resistance clusters around them.  Either way, it seems the support shelf has been broken, and with today’s action, retested with a rejection.  The short term “triangle,” if we can call it that, target has been met, but I think there is more to go. 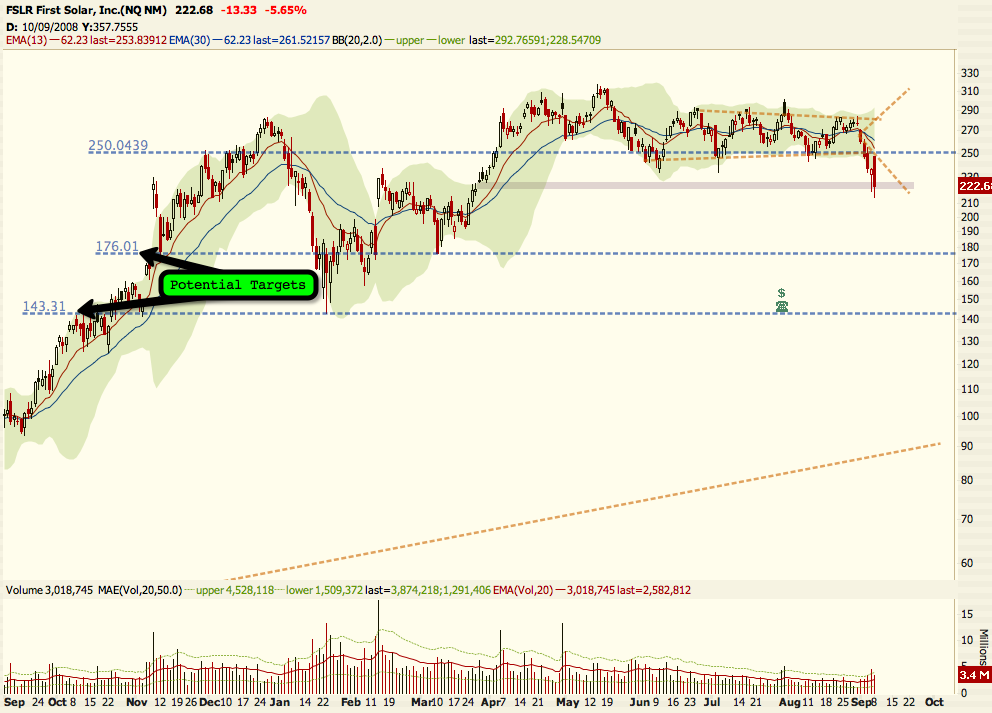 I will leave you with a chart that Mole sent me today, illustrating the strength of the overhead resistance.  I am really looking forward to the rest of the week, as I imagine by its end, we will have but one remaining choice.  Keep with us as we will keep you posted as to the developing wave pattern. 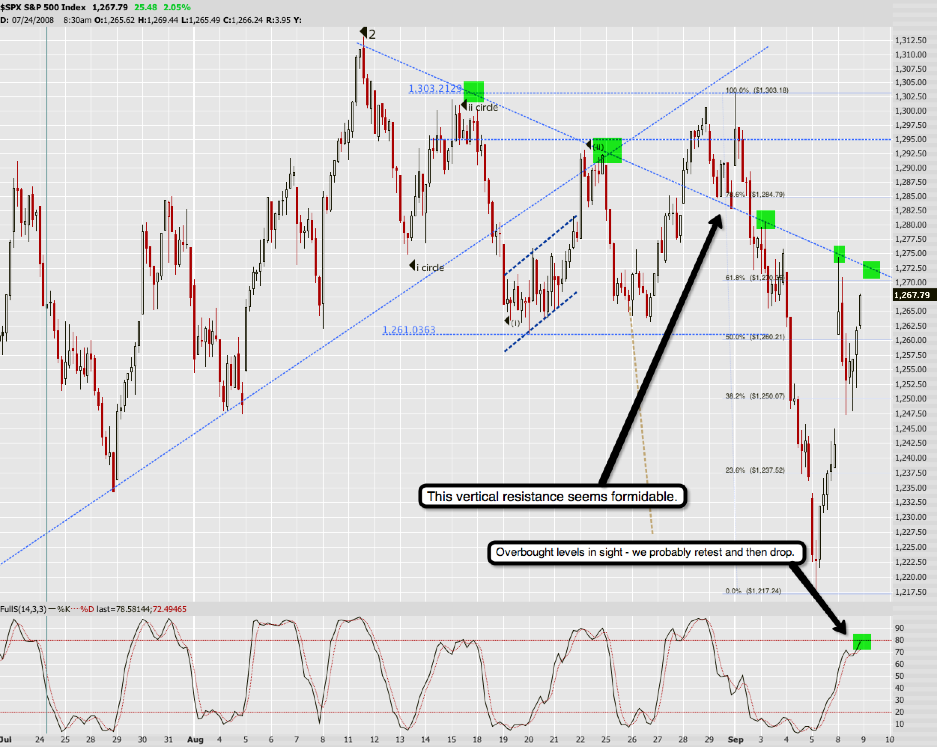 Get a good breakfast tomorrow, the early action should be telling.  As the Japanese say, the first hour is the rudder, setting the direction for the market’s daily action.