Once again I am seeing a lot of bad comedy trickling out of the Federal Reserve, and in particular preceding FOMC rate decisions or announcements. A salient example scrolled across my twitter feed just moments ago with Jeff Lacker allegedly having stated that the Fed should raise rates sooner rather than later. Apparently Mr. Lacker is once again engaging in the verbal equivalent of smashing pumpkins, given that chairwoman Janet Yellen is scheduled to speak today as well as tomorrow and will most certainly continue the FOMC’s dovish course. In particular as President Trump has continuously highlighted a strong belief in a weaker Dollar.

The floating of FOMC ‘trial balloons’ of course is nothing new and has been increasingly employed over the past two years to dangle the idea of an impending rate hike. Which of course will never come, and if it does for pure political reasons will most likely not exceed more than a few obligatory basis points. To the financial mainstream media however, spearheaded by the blockheads over at CNBC, any inane uttering by any non-voting FOMC member is pure clickbait manna from heaven and thus is eagerly disseminated to its diminishing audience of gullible retirees. No matter that Mr. Lacker is known to be the ‘great dissenter’ and that a quick Google search shows anyone interesting in digging deeper that he has been pushing ‘a case for strengthening rates‘ for years now. And we all know how that turned out.

Clearly one day the Federal Reserve will actually increase rates by an amount that actually matters and affects interest rates in a meaningful way. That day may be tomorrow or it may be five years from now. In the interim I strongly suggest that you fade any and all noise related the raising of interest rates, for nothing of substance will ever be reported by the mainstream media until the day after it actually happened and at that point it will be old news. And if you are interested in silly comedic acts then you’re probably better off looking elsewhere. 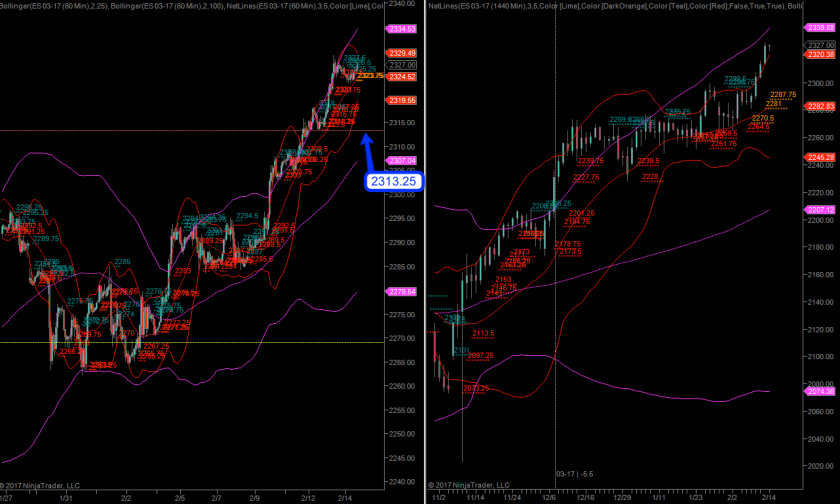 Once again we need to attend to some of our campaigns. The E-Mini has continued higher and I’m placing my stop below the recent spike low near 2313.25. 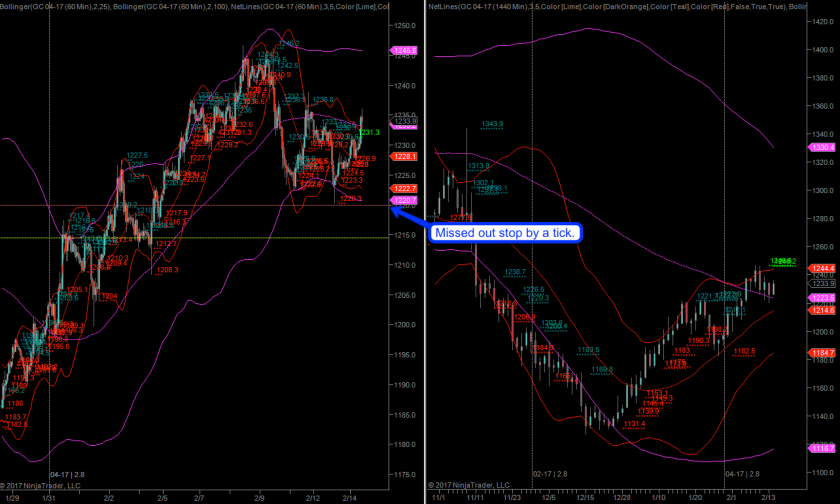 Gold almost stopped us out yesterday – we missed that little shake out by a tick or two. Looking brilliant now and the odds for a punch higher have increased significantly. Better to be lucky than good! 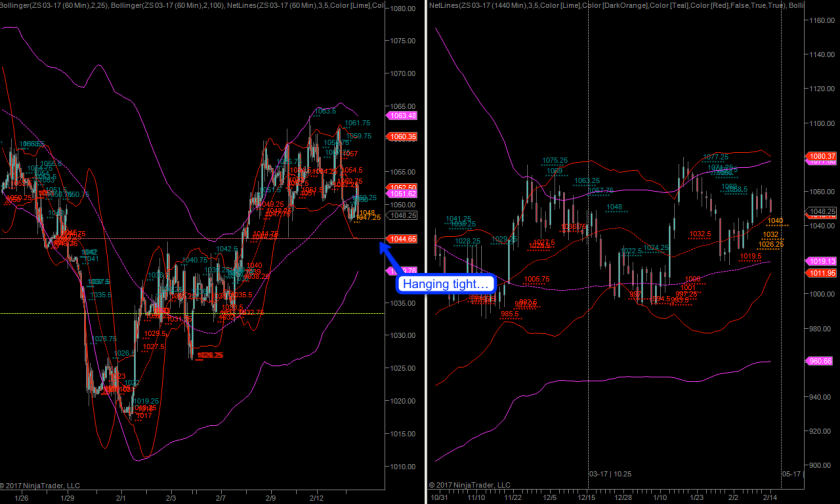 Soybeans not doing anything and we’re hanging tight. The good news is that, assuming that it continues higher, we’ll be enjoying a hell of a lot of support context further down the line. But for now we shouldn’t over think this and leave our trail in place. 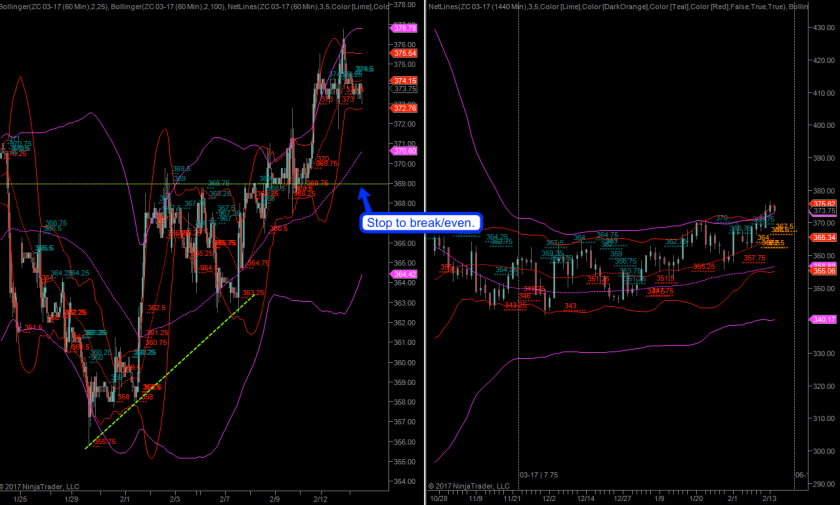 I’m not sure if you caught corn – I was lucky as I grabbed it early in the morning. If you did or entered a bit higher than I suggest you move your stop to break/even now. 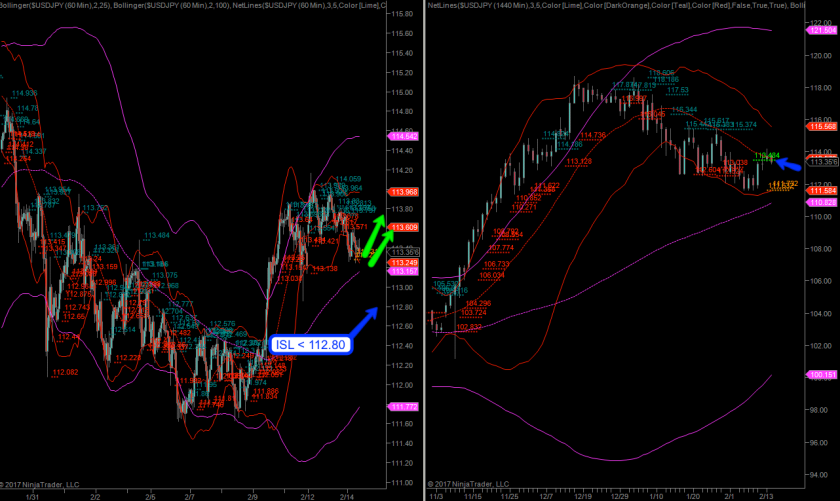 USD/JPY is an entry right here and now and until about 113.15’7. It’s a small entry for me however as the FOMC announcement tomorrow may cause volatility. Stop goes below 112.80. 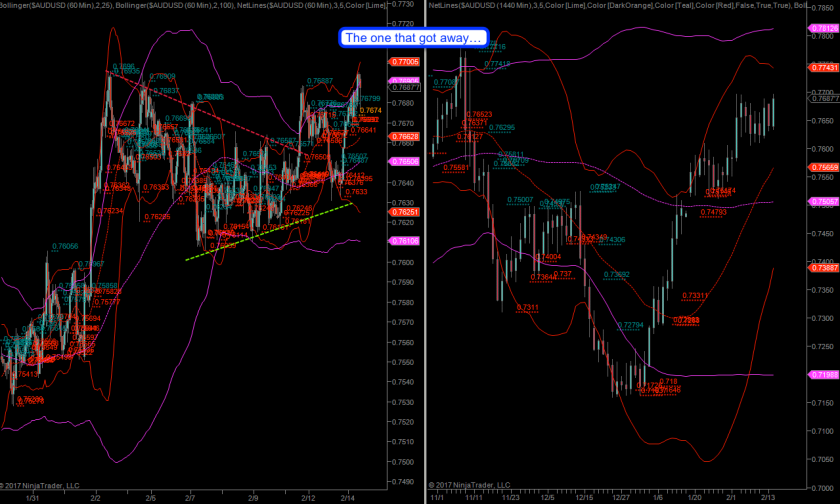 AUD/USD is the one that got away. Remember how I was waiting for a fake out to the downside first? Well, we got one to the upside followed by a retest of the support line. Truth be told I actually saw it yesterday afternoon and was considering to go long. But the retest wasn’t thorough yet and then I forgot all about it. I catch you next time, Gadget – next time!!