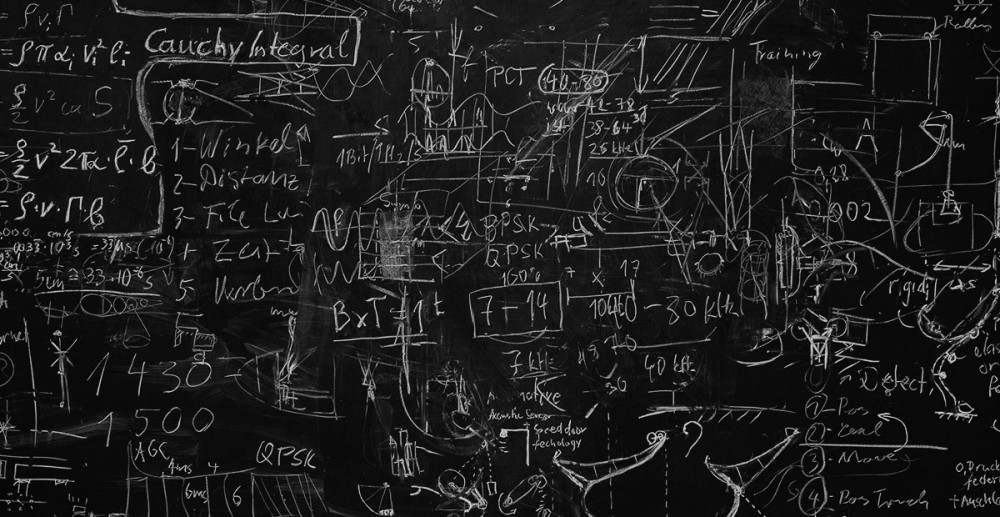 For the past few months I have seen a quite a jump in new subscribers which of course is quite positive from a business perspective – the more the merrier. However this slightly changes the dynamics in the comment section and on the blog as an influx of noobs means a more mixed bag of trading skills. That’s however not necessarily a bad thing as even old timers may benefit from the occasional refresher on some of the basics. We all have a tendency of falling into our own habits and I believe getting rattled out of your comfort zone on a regular basis is a good thing. So, based on pertinent commentary over the weekend I decided to cover a rather important subject matter – position sizing! Yes, one often ignored but essential piece to the puzzle of becoming a profitable trader.

Most likely you have already heard of the 2 percent rule as a basic tenet of risk management. Even if the odds are stacked in your favor it is inadvisable to risk a large portion of your capital on a single trade.

The latter has become my personal prime directive. Hite goes on to describe his 1 percent rule which he applies to a wide range of markets. This has since been adapted by short-term equity traders as the 2 percent rule, which basically implies that you should never risk more than 2 percent of your capital on any one position.

So here’s is the traditional way of calculating your position size:

Position size = 2% of your account / stop size * dollars per point

Now, I personally do it a bit differently using a method inspired by the old Turtle trend trading system:

Since the turtles originally traded commodities let me show you a more complicated example, which also helps you define your unit sizes for various types of instruments. In the end it always simply boils down to how many dollars you earn/lose with each point move:

So, before we get the formula let me define how we arrive at ‘N’ – which basically defines a contract’s (or stock’s) volatility: 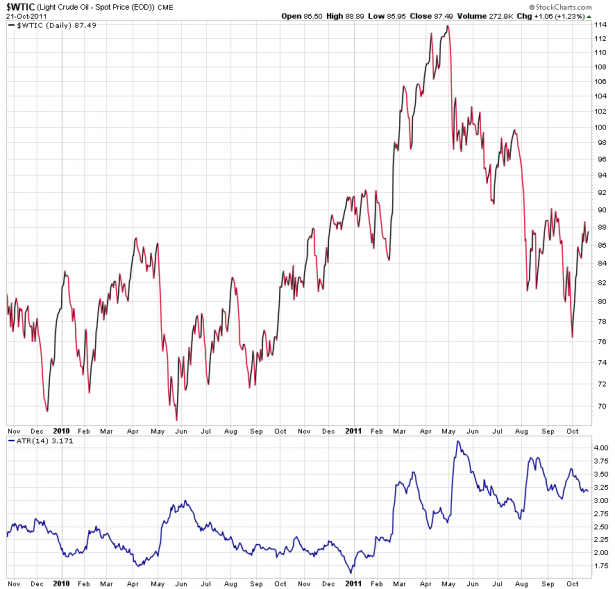 There are many ways of how to define N but a very basic one is to simply slap an ‘average true range’ indicator on a daily chart. We can see that the ATR for crude right now hovers around 3.25. Obviously I am going to put my stop at or slightly below that. Great, now let’s plug that missing piece into our formula:

So that is the risk I am limiting myself to – 2% of my capital. Now, if I want to be less risky and use 1% I can use 3 contracts instead.

This simple table shows you why capital preservation and thus capital commitment guidelines are of prime concern for any serious trader. Simply, excessive loss of trading capital means that it takes an increasing amount of returns to get back to where you started out from! If you lose 25% of your capital that means that you have to earn 33% to bounce back. A 50% loss (double that) however requires a return three times that – basically your job now is to double your money just to get back to break/even. Scary! And that does not even account for slippage, exchange/brokerage fees, data fees, etc.

Now you may understand why we rats are extremely disciplined when it comes to when, where, and how we execute our trades. Of course not all traders face the same success rate (or reliability as Van Tharp calls it in Trade Your Way to Financial Freedom). Short-term traders normally achieve higher success rates, while long-term traders generally achieve greater risk-reward ratios.

Your success rate is the number of winning trades expressed as a percentage of your total number of trades:

Alright, that should keep you guys busy for a while. Let’s move on to my weekly perspectives – please step into my evil lair:
[amprotect=nonmember] Charts and commentary below for anyone donning a secret decoder ring. If you are interested in becoming a Gold member then don’t waste time and sign up here. And if you are a Zero or Geronimo subscriber it includes access to all Gold posts, so you actually get double the bang for your buck.
[/amprotect] [amprotect=1,13,9,12,5] 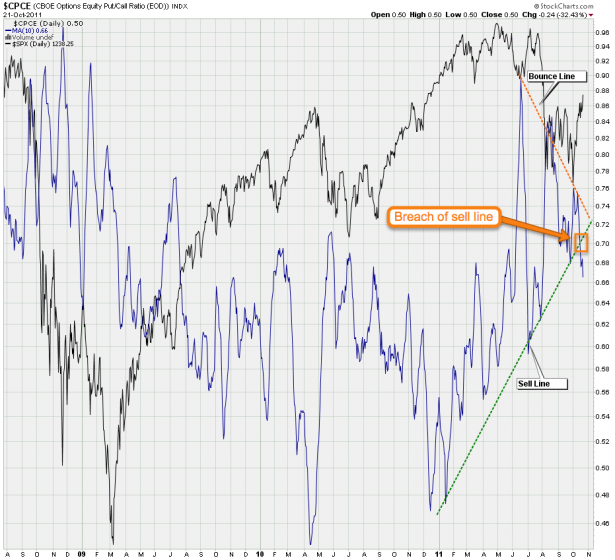 I pointed out my CPCE Deluxe chart last week expecting some type of breach either way. Well, the line that gave way turned out to be the sell line, which may good timing in regards to seasonality – no matter which way you count the weeks – grumble mumble…. 😉

As the put/call ratio seems to be dropping (i.e. bullish sentiment is on the increase) it’s probably good to take a peek at our volatility indicators: 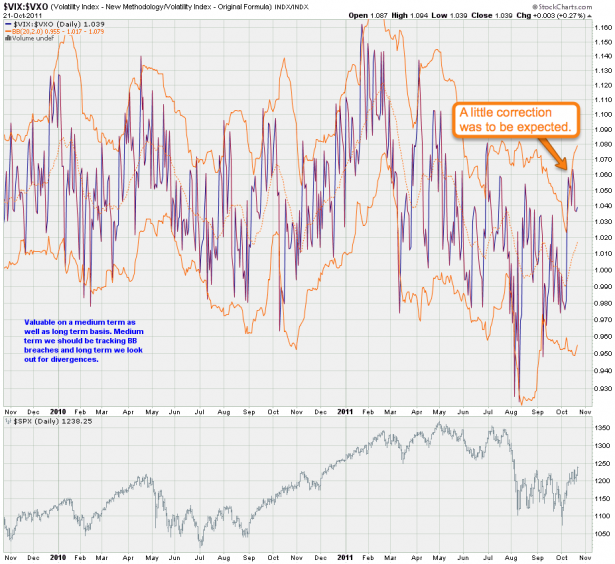 You probably recall my VXV:VIX chart (VXV representing three month volatility as opposed to front month only as expressed by the VIX). That steep push outside the upper Bollinger did lead to a small correction, which frankly was a bit weaker than I expected. All in all pretty bullish as we now have a rising and expanding BB bubble with plenty of upside potential. 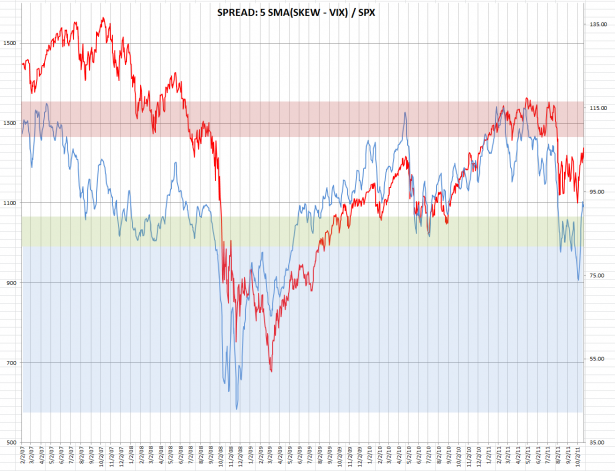 Yes, I have been a busy bee and even spent some time updating my historical SKEW-VIX delta chart. Thus far I am not seeing any divergences plus we barely pushed into the neutral zone. No worries – it’s completely devoid of Romulans – but they seem to have a habit of becoming uncloaked when we start pushing into the red areas highlighted on the chart. But at the current time we are still lightyears away from that. 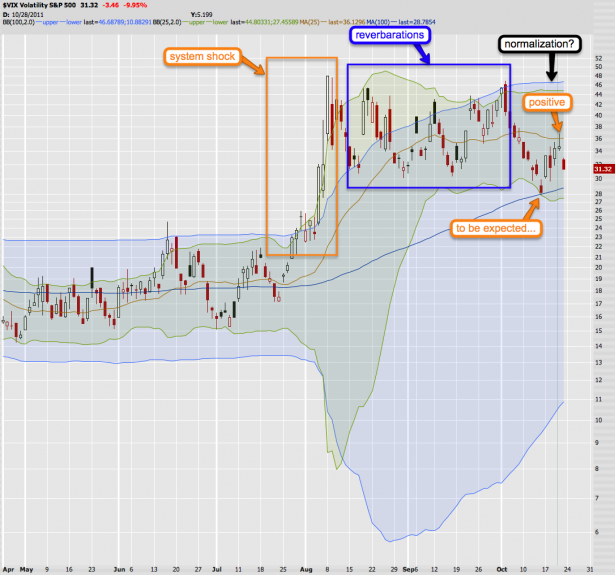 Since we’re on the topic I decided to go all the way and share with you a little side note on vanilla volatility as shown on the VIX. The orange box frames what I consider a ‘disturbance in the force’ (last sci-fi reference for the day) – a clear market dislocation and volatility literally went apeshit in a matter of days. You can basically hear millions of bulls scream in terror and then suddenly fall silent.

After that we continued to bounce around and that is to be expected as large moves in volatility usually cause reverberations. Now we just may (notice the weasel talk) enter a period of normalization, which however cannot be confirmed until we close back below the 100-day SMA, which not so coincidentally also ranges around the 30 mark right now. In case you are new or do not recall – the 30 mark has always been my bear/bull separation trend delineation mark. 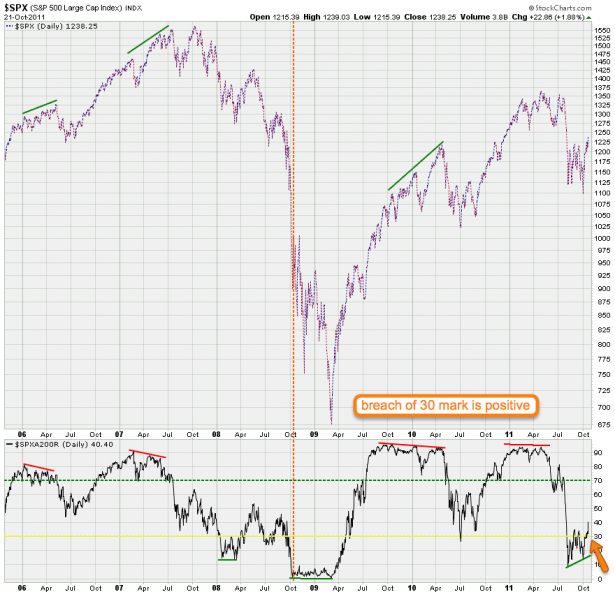 Another positive sign on the horizon is observable on my SPXA200R chart (i.e. percentage of SPX symbols above their 200-day SMA). As you can see we peaked above the 30 mark, which is an important clue of potentially better times ahead. Of course it is possible that we push above and then drop below again, just like we did in 2008. That would be a pretty bearish event and it is something the longs need to fight tooth and nail to avoid from happening. I’m sure the Bernank will do his part. 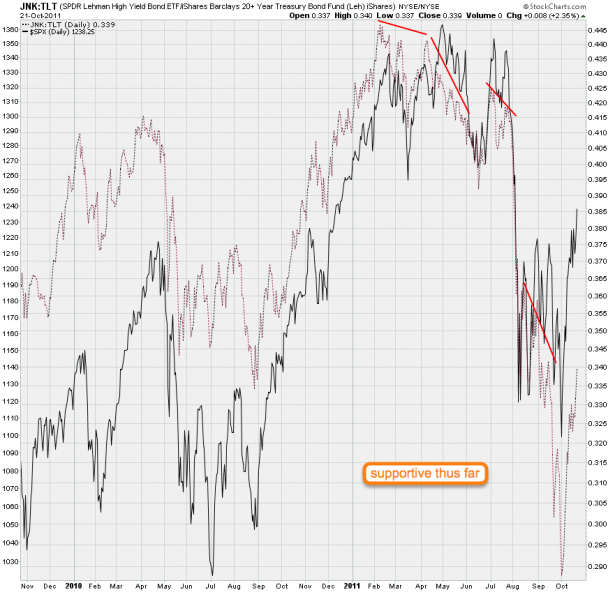 Let’s poke around a bit more. Here I’m correlating JNK/TLT with the SPX – usually credit market traders are the ones to follow as they represent much larger assets and thus are on average better advised than those lowly equity traders (many of whom are retail schmucks like you and I). So we are looking out for divergences and I’m not seeing any at the current time. 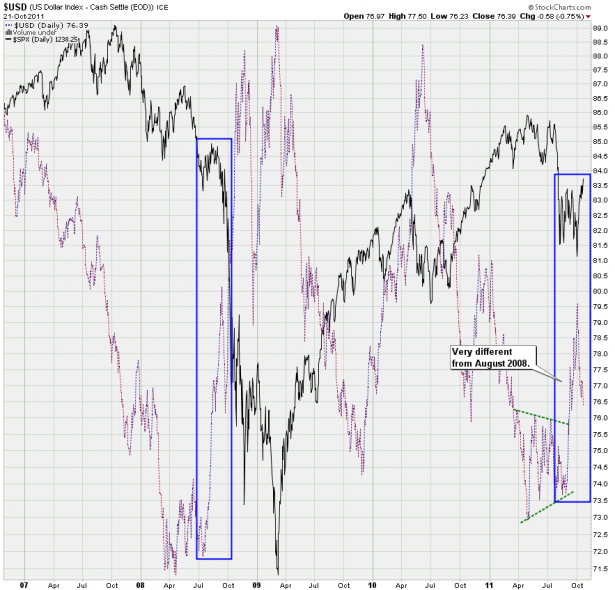 Quick peek at the Dollar, which has been reversing quite hard in the past month. You may recall that I was wondering about a repeat of 2008 when we were forming that wedge on the very bottom. Thus far that analogy seems to be breaking down as the Dollar ramped without much of a downside response on the equity side. Based on the 2008 pattern we should be dropping hard by now and although seasonality does permit a late October dislocation the odds are now starting to firmly support the bullish camp. 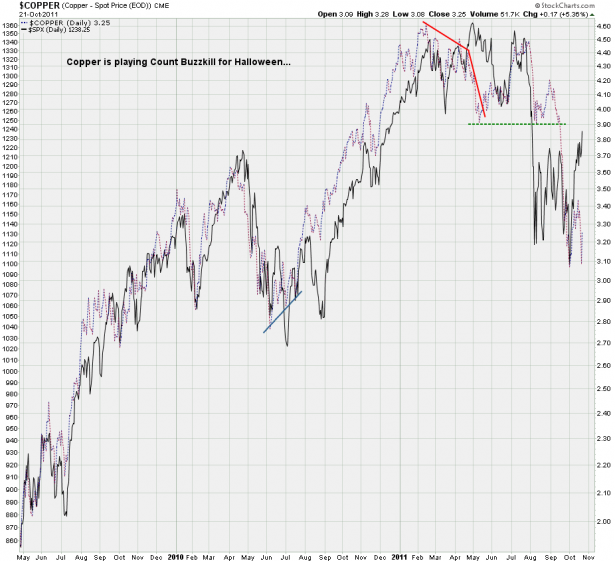 Finally, the one ointment in my soup – let’s hope the spider on my bread will soon get it. Copper has been taking a few hard hits as of late and is not supporting the recent rally on the equity side. What gives? Frankly, I’m not sure but it’s making me a bit nervous. I would very much enjoy seeing it catch a bid in the near term future – let’s keep an eye on the 3.00 mark, which is rather crucial psychologically.
[/amprotect]

I completed the refactoring of my TrendAlert indicator and it’s now working on a tick basis just as the Convict Down Under wanted it (actually it’s a 1-sec interval as that’s the market snapshot my data provider produces – it gets complicated). However, when manually comparing my 90-min window- 1-min – 75% treshold setting to Scott’s 45-min- 1-tick – 90% threshold setting mine seemed to do a bit better – at least in the past 30 days. So, to not to fall prey to recency bias I decided to turn it into a simple trading strategy later this week so that I can do some thorough back testing. I’ll report back once the results are in.

In the interim the TrendDay indicator will however run via Scott’s rules as they are obviously more conservative and every once in a while I try to act responsibly. I’ll test it on myself overnight and if everything works according to plan I’ll switch it on for all the subs on Tuesday or Wednesday.