Yesterday strangely presented us with what I call a ‘bearish bullish candle’. Has Mole finally lost his marbles? Maybe, but there is method to my madness – let me explain: 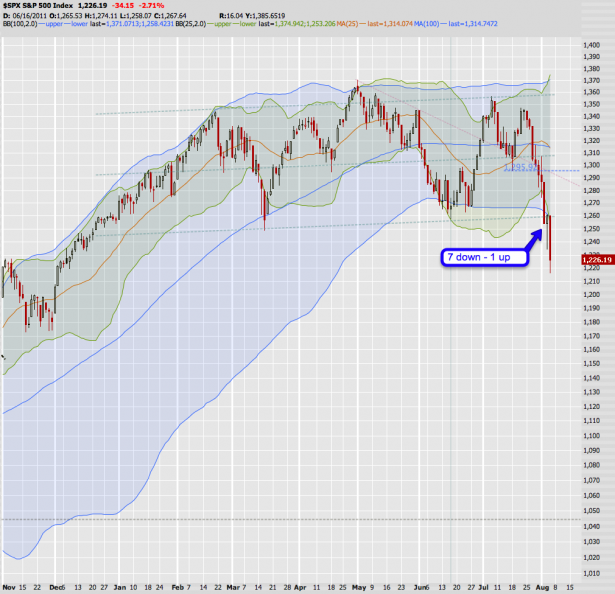 After seven consecutive candles down the odds for an eighth was only 0.31% – rather low. And low and behold – we got our ‘up day’ – which certainly didn’t feel like one. But it gets worse – as Convict Scott would put it (if he was paying attention) – what should have happened was a violent snapback leading to a little short squeeze. If we were still in a bull market that is.

Instead the bears helped themselves to another serving of kick ass and we are now in technical territory not seen since 2009. After a last kiss goodbye to our lower channel support line we finally fell away today and are now back in the December 2010 range. And that means the odds for this being purely a major correction in an ongoing bull market are depleting rapidly. Much technical damage is accumulating here and the bears are smelling blood. 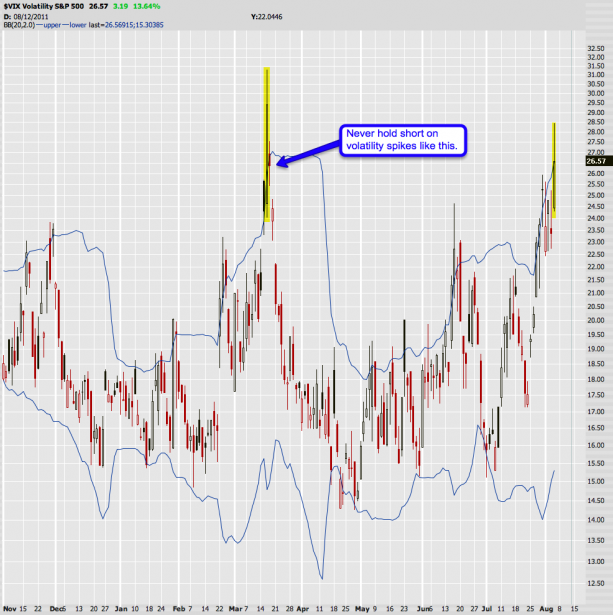 Nevertheless holding short here is probably not a good idea. Am I going to say that we couldn’t possibly see a push above the 30 mark on Mr. VIX? Of course not – but clearly this is not where you buy vega this is is where you may want to sell vega – or at least be vega neutral.

But wait – there’s more – a lot more…
[amprotect=nonmember]
Charts and commentary below for anyone donning a secret decoder ring. If you are interested in becoming a Gold member then don’t waste time and sign up here. And if you are a Zero subscriber it includes access to all Gold posts, so you actually get double the bang for your buck.
[/amprotect]
[amprotect=1,13,9,12,5] 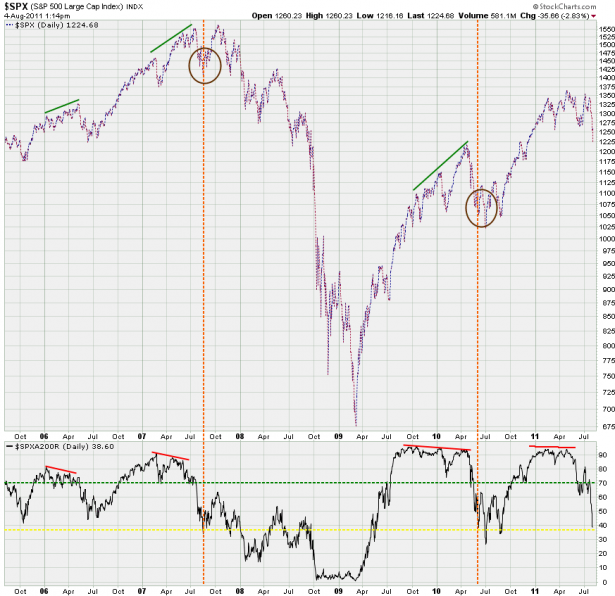 If you have been a sub for more than a week you remember this chart. And it’s spelling BIG trouble as we are now scraping the 40% mark. Yes, bounce territory – but that’s not really what I’m focused on. Rather, what I want to see here in the coming week is a little short squeeze accompanied by a listless bounce in the SPXA200R. The money shot would be to get near recent heights in the SPX while remaining below the 60% mark on the SPXA200R – which of course would smell of distribution. Yes, one can dream – but we’ll keep watching this chart just the same. 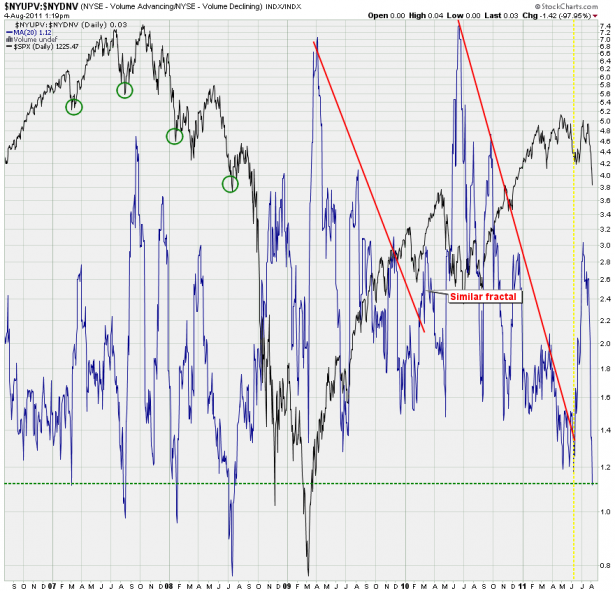 Two things to focus on when looking at the NYSE advancing/declining volume ratio: First, we are dropping into a range not see since the 2007/2008 bear market. By the way, this is a moving average, not the raw signal – so again technically quite a lot of damage here. Secondly, we are most likely overdue for a bounce – happened every single time back back when. So, this confirms my outlook that holding short here is merely playing the lottery. 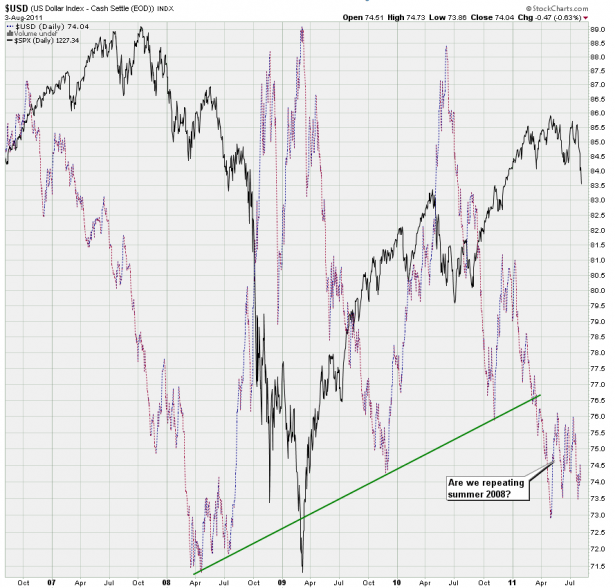 The last long term chart for today – ye ole’ bucky. Which has turned into the bitch boy of the currency market. Look at what’s happening in equities/bonds today and compare what is presented above with the tape of a few years ago. Now consider where the Dollar was during that time – yes, it accompanied equities down until April 2008 – but that was before the real crash happened. But then it finally caught a bid and from there things got really ugly. Until the Fed stepped in and and stomped on the short end of the treasury curve with their zero interest program.

Now I ask you this – what is the Fed to do this time around? After two unsuccessful quantitative easing rounds, which incidentally were politically rather inconvenient and widely unpopular? If the Dollar finds a bid here – in a month – three months – six months from now – in the midst of an economic double dip – things could unwind rather rapidly. Now, this might still play out in slowmo over the next few months but a crawl up to the 77 mark would be an early indicator that it may be time to batten down the hatches. 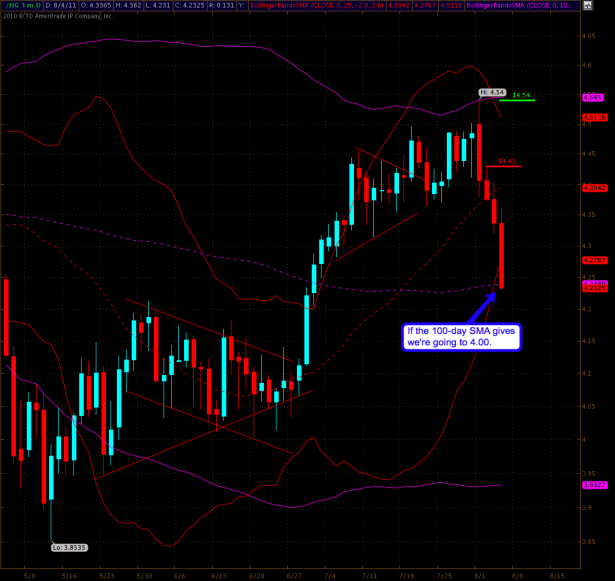 More short term copper is now heading into possible target territory. If it breaches below both MAs then it probably is going to drop into 4.00. That would be rather painful for equities – so I recommend you watch this chart. 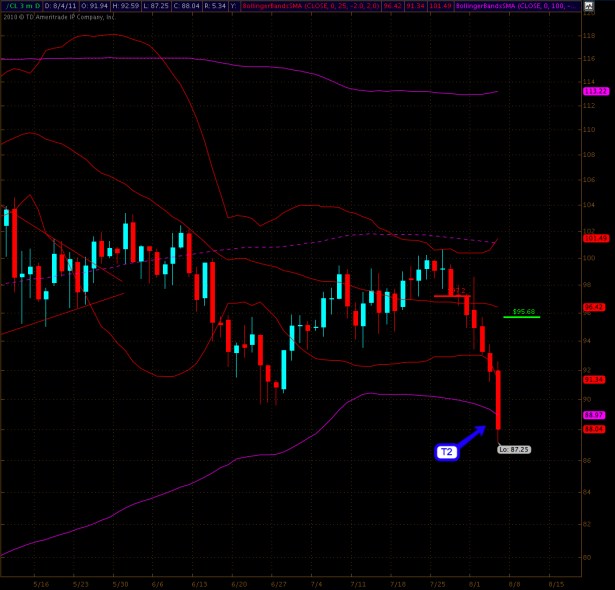 Crude has reached out second target and although I don’t want to take a long position here it’s officially on ‘long watch’. 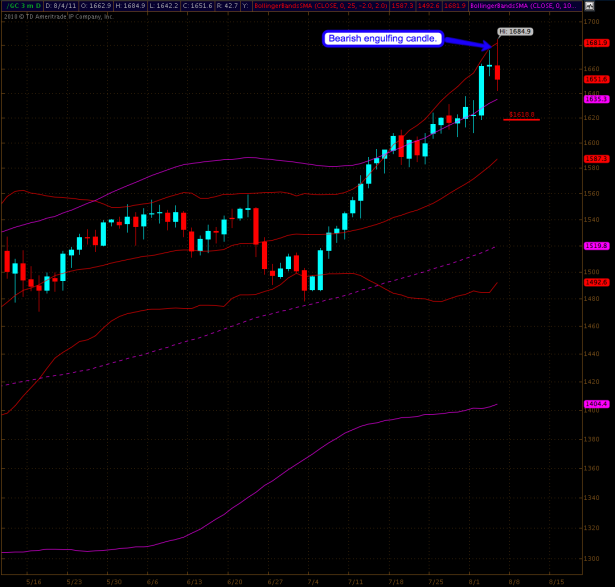 Gold – as you recall I was waiting for a sign from the dark Lord and it looks like she answered my call. That’s a rather bearish engulfing candle a small short position may be appropriate. I’m not taking out a major contract here as gold has not confirmed bearish yet and this trade would be highly speculative. Stop at today’s open if you must know – I’m not holding this to 1685. 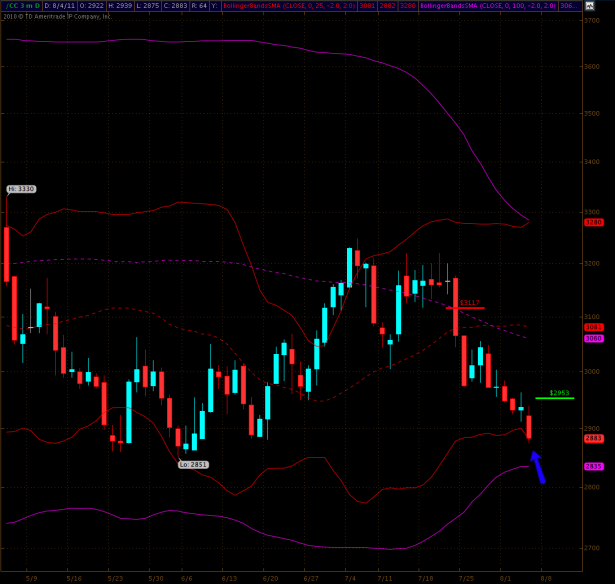 Cocoa is now at our first target and it’s time to start taking profits. 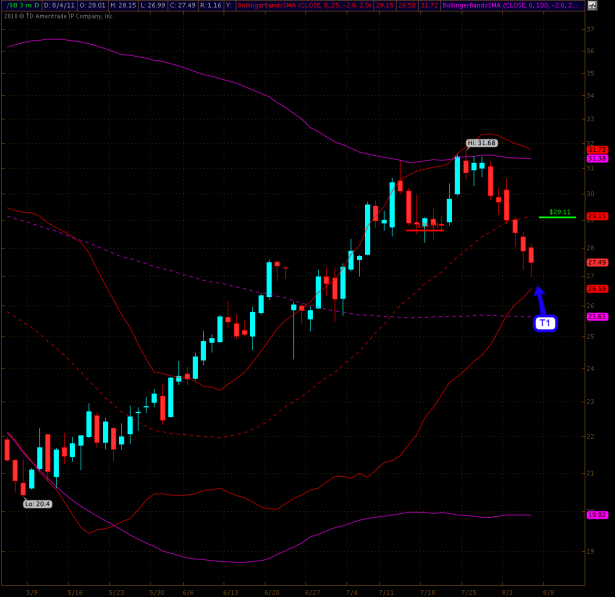 Let’s mix in some sugar to sweeten up the deal. We never really got a solid signal on sugar but if you rode this one lower I would be taking profits at 27. NLBL is miles away – so unless I see some clear floor pattern long trades are off the table here for now. 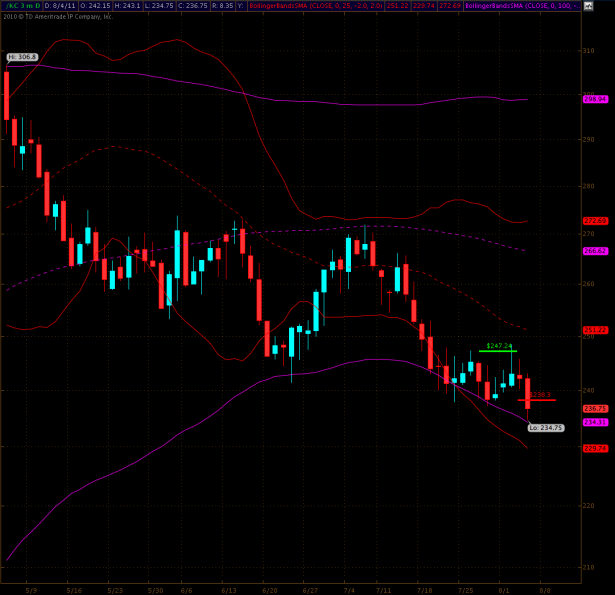 Coffee however just dropped through yet another NLSL and it’s possible it’s going to do the double Bollinger slide like Napolean in Bill & Ted’s Excellent Adventure. 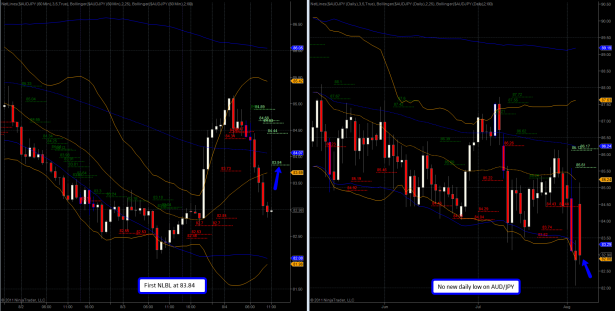 If you are looking for a sign to go long equities you may also look at the overnight action on the AUD/JPY. That next NLBL is still miles away though. What’s interesting however is that we are not painting a new daily low on what has in the past two years proven to be a tightly correlated FX pair to the S&P E-Mini futures, a.k.a. the spoos. 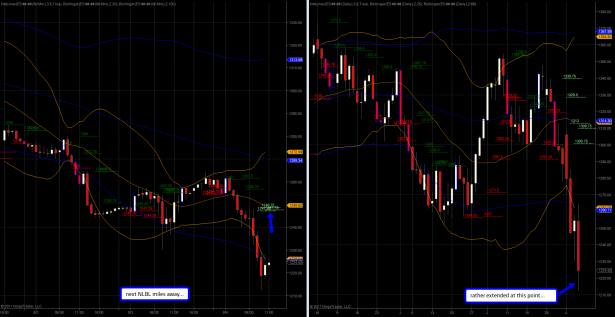 Speaking of the devil and finishing the post on an evil 13 – similar picture but more bearish – by all means more over extended. I do not want to be short or long here (yet). If I see signs of a floor I will report on that. But always remember that a big third wave like this is always followed by a fourth and then a fifth wave.

I’m really not worried about the short term right now – I’m not worried about a continuation lower either, at some point it’ll bounce back. My entire focus right now is to gauge the tape as it recovers. What we want to see are divergences and signs of distribution – and that would be when I’ll back up the truck for a boat load of shorts. But that time has not come yet – let’s see what happens on the way up first and then we finally will be able to arrive at a more solid assessment and potentially the confirmation of a trend change.

A little caveat if you happen to be a noob – don’t buy calls here unless they are deep ITM. If volatility drops your premium will get killed, even if you are right on the direction. There is similar risk for put holders btw – we may see a continuation downward while volatility drops and your premiums would similarly be affected.