I meant to post this earlier today but was too busy. In the meantime Hochberg/Kendall from EWI beat me to the punch and so I decided to post my chart and their pertinent commentary: 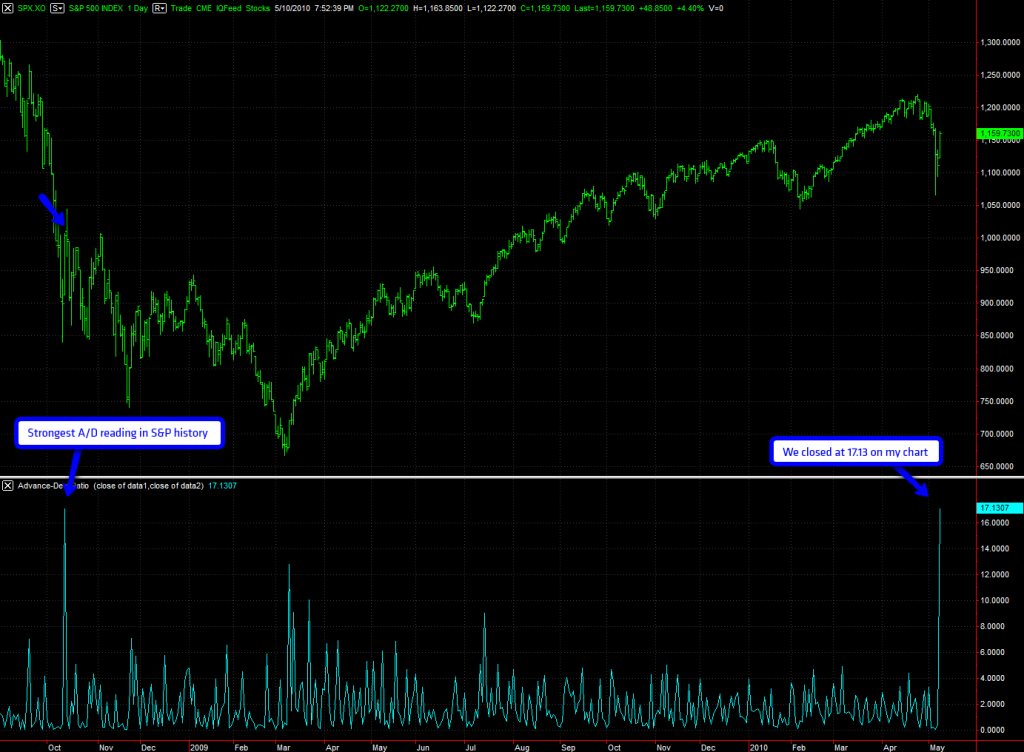 How’s that for a market hard-on? That’s of course Mole talking – EWI is too damn polite, except behind doors after seeing a candle like this – then they curse like sailors like the rest of us 😉

Alright here’s the STU quote with some juicy stats for you stainless steel bean counters among you:

Finally, here is a piece of market information that we got through Bianco Research this morning. “According to Bespoke Investment, today will be the third largest opening in S&P 500’s history. The two larger opens share a lot in common with today: [1] Friday, September 19, 2008 — the night before the TARP was leaked to the market (starting with Gasparino on CNBC). Lehman had failed five days earlier; [2] Monday, October 13, 2008 — This was the day all the heads of the 9 largest banks were called into the Treasury and forced to take TARP money as a capital injection ($125 billion in total).” Today’s open was the announcement of “Europe’s TARP,” the equivalent of “America’s Tarp.” As Bianco notes, and the previous two dates should make clear, the prior two instances led to a sharp decline for the next six months, as Primary wave 1 (circle) carried prices lower until March 2009. In fact, the spectacular gains registered on September 19, 2008 were taken back one trading day later. The gains of October 13 were more sustained; lasting all of two days. This latter date is interesting in that the NYSE advance/decline ratio closed that day at a whopping positive 18:1, exactly the same a/d ratio that today’s rally delivered, as shown on the above chart. Regardless of the exact near-term timing, our interpretation of the wave structure indicates that once the current bounce is exhausted, a significant market decline will be at hand.

Freebie Alert: In case you have been stuck in a cave all week: Elliott Wave International is having their free week and you are able to get Prechter’s April Elliott Wave Theorist right now – absolutely free. Very generous of them and an absolute must read IMNSHO – so head over there and grab it.

Anyway, you may remember that chart from my Fractal Attack post and although I did expect a spike up here this is of course a lot more than I bargained for. Today’s spike is several sigma levels outside the norm and I am not sure how to interpret this outside yet another ridiculous insider trading give away that it is.

Remember that this Trillion Dollar (or is it Euros) bail out is aimed at saving the Euro. Well, let’s see how strong today’s response in the Euro futures was: 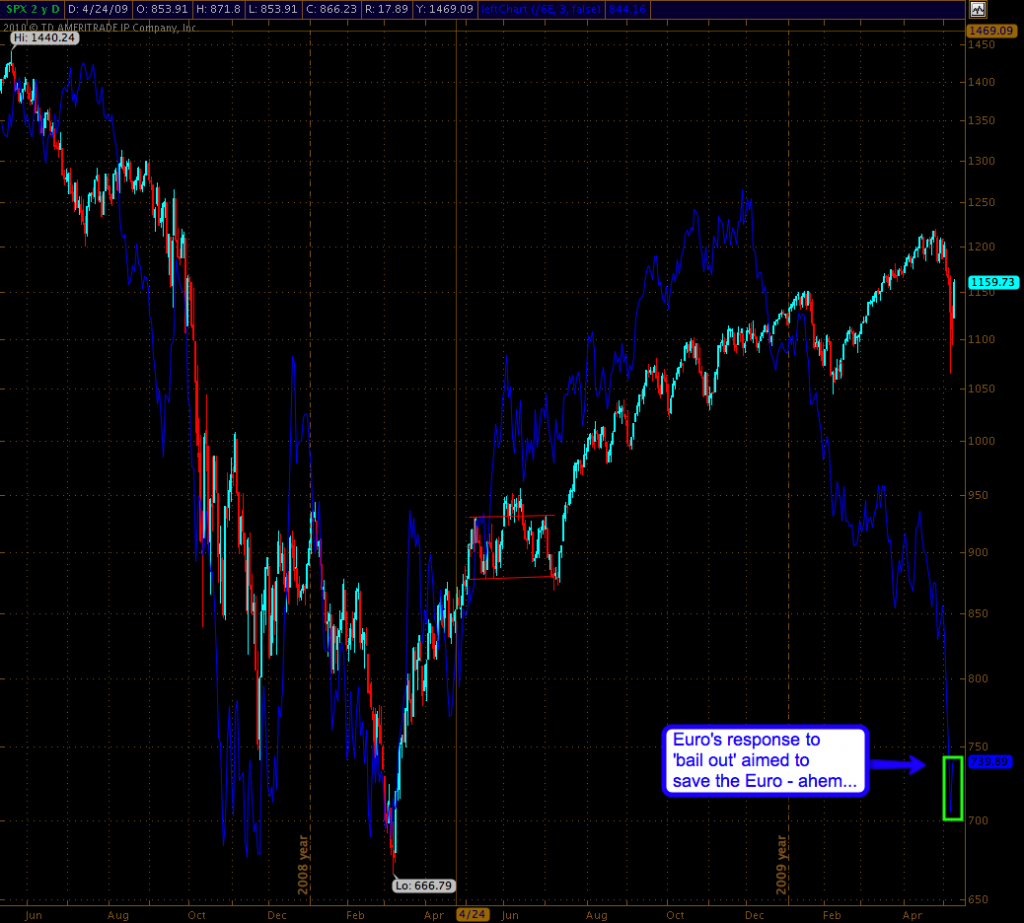 Wow, that’s a whole lot of nothing – even worse, after the futures session the EUR/JPY (and EUR/USD) kept dropping. Fat lady hasn’t sung yet but after all the excitement in equities today I feel like the response in the FX market is a bit muted – and those traders are usually a lot smarter than their mouth breathing equities slinging brethren.

Which brings me to the count. 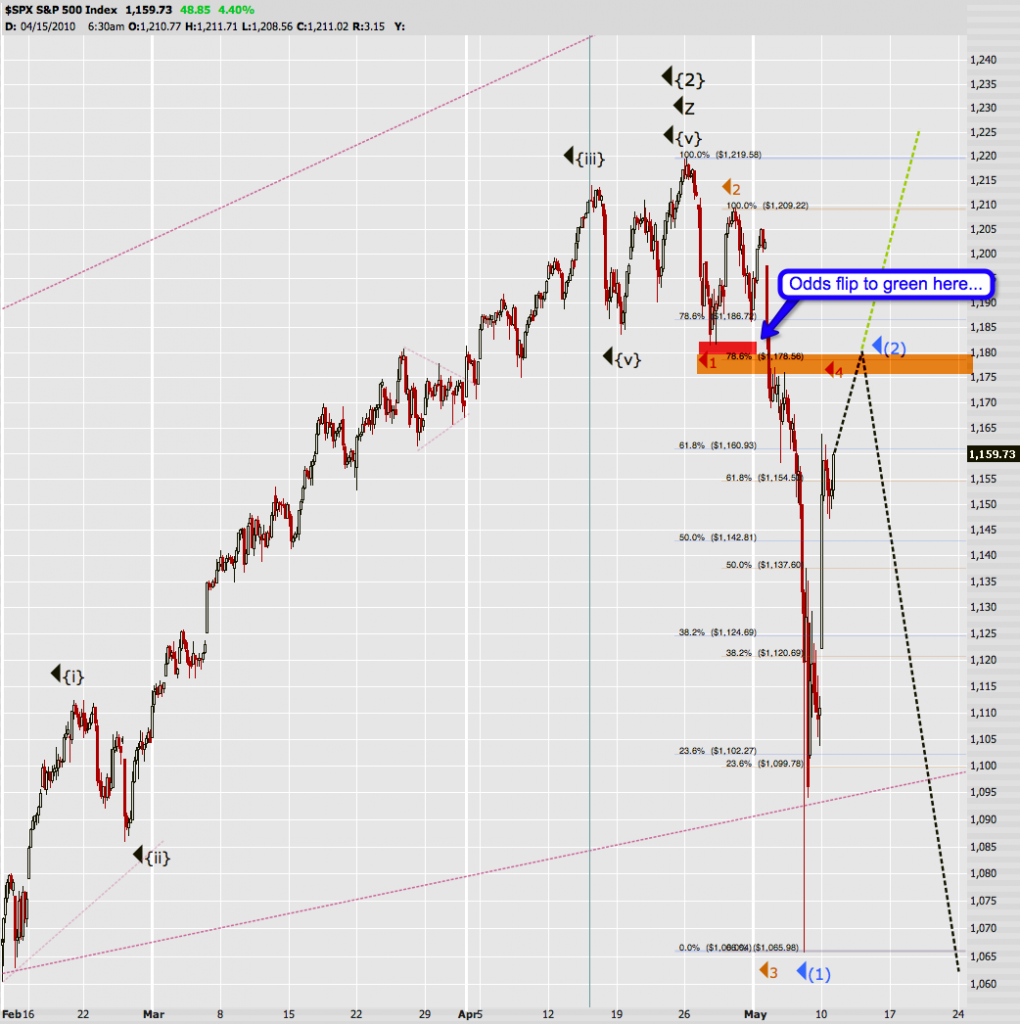 There are two competing bearish scenarios right now – and the difference is purely academic. Soylent Orange suggests that we are still in Intermediate (1) of Primary {3} and Soylent Blue leaves us still in Minor 4 of Intermediate (1). Again, the difference is academic – however I do gravitate towards the latter as I don’t think a one week move should be counted as an Intermediate – despite its historic strength/breadth and momentum. But that’s me and the end result would be the same – down and that fairly soon. Unfortunately we won’t get confirmation on either scenario until we breach 1,065 – that’s a mile away right now, but I said that of Dow 10,000 just last Wednesday 😉

Soylent Green would start becoming a serious possibility around 1175 and if we go higher from there the odds would flip at the Minor 1 low of 1181.62 – so set an alert right there on the SPX, not in the futures. 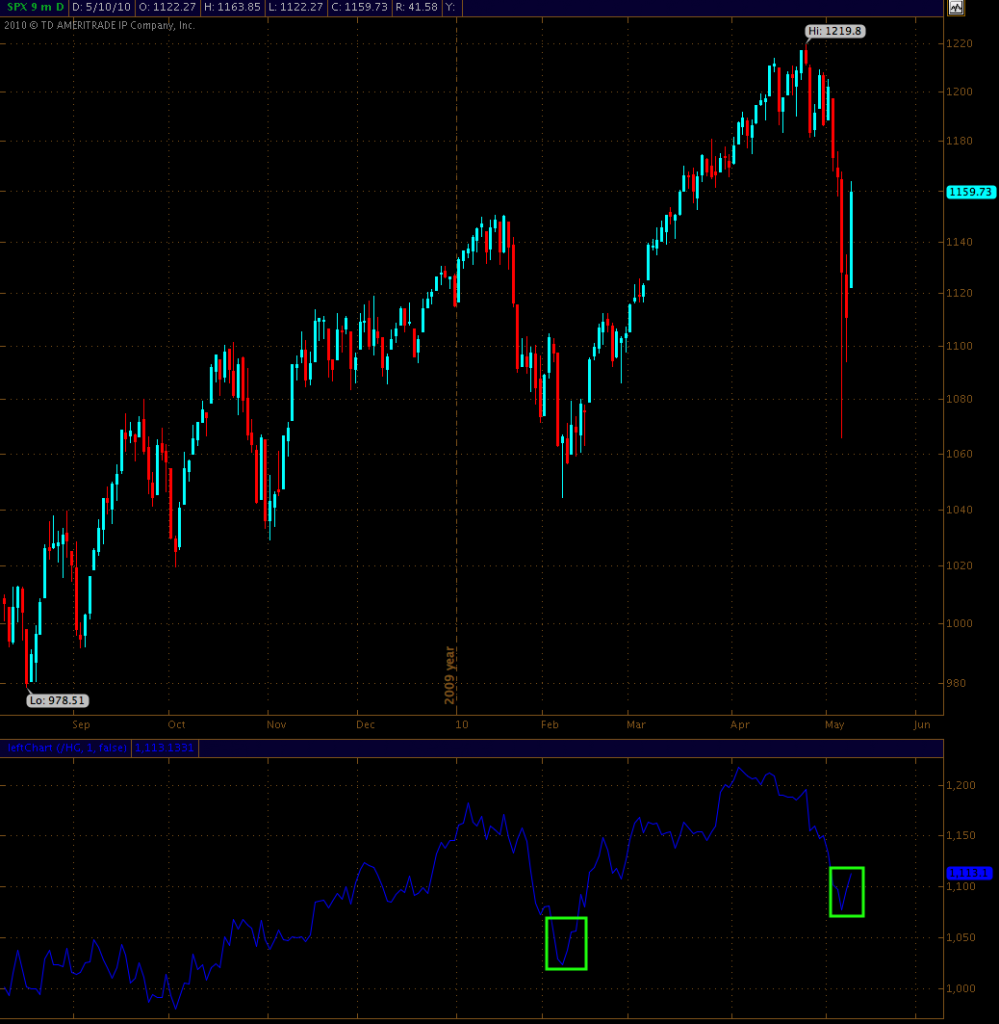 The reason why I am still entertaining Soylent Green is copper – that candle today is making me a bit nervous and I’ll keep watching this thing like a hawk over the next two days.

That wraps it up for me tonight – stay frosty and don’t get emotional trading this tape. Don’t get caught up in the drama – let’s stick with the technicals and with banking the maximum coin.