This post is less of a prediction and more of a ‘reset button’ for all the bears. Don’t get me wrong – odds at this time point towards a long term trend shift to the downside. But it won’t be easy – case in point: The instant 15 handle ES reversal we just saw on very little momentum (judging by the Zero Lite signal). It’s very easy to get whipsawed out if you’re over leveraged or especially if you’re not seeing the forest before all the trees. I talk about this all the time – ‘focus on the long term’ is my ongoing mantra. 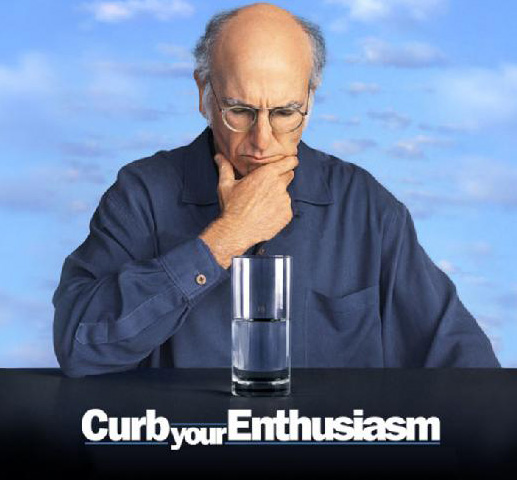 Let me show you: 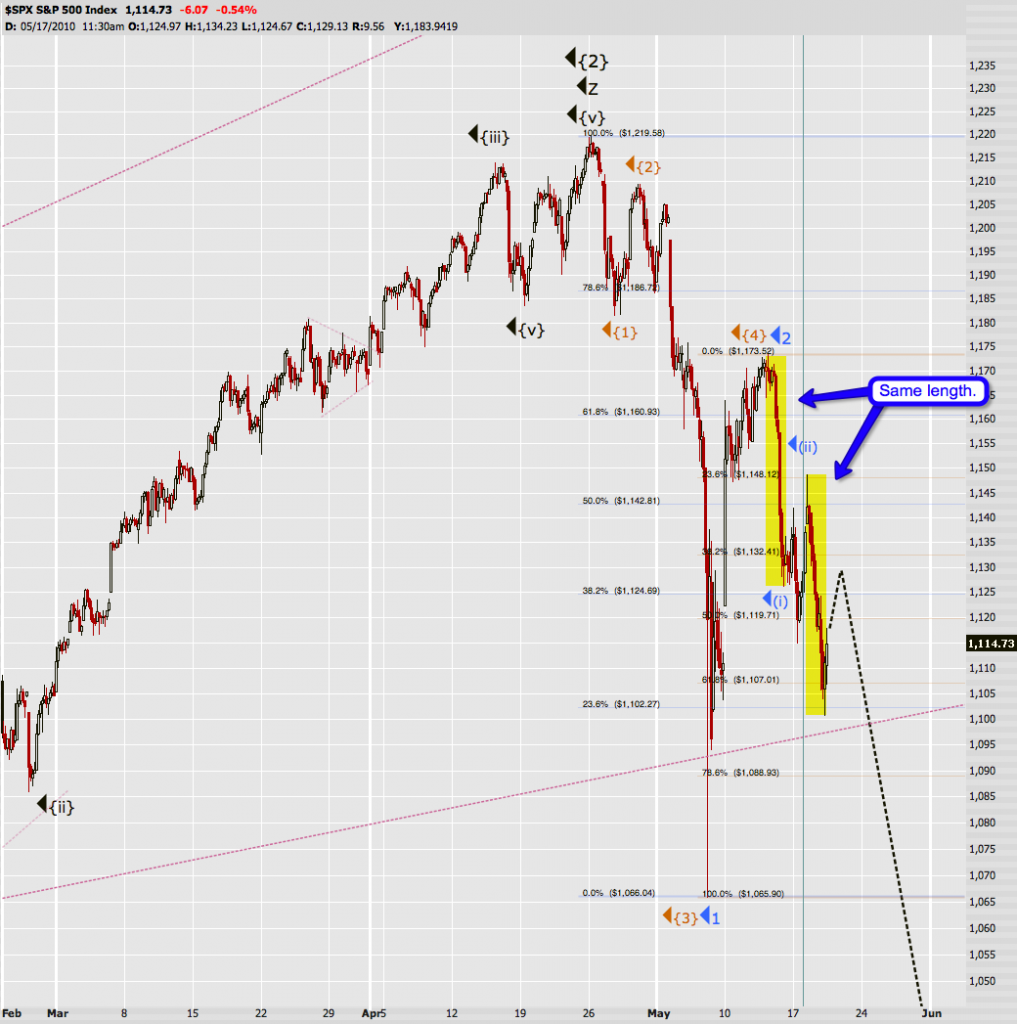 First let’s look at the current short to medium term count. I’m actually counting Minor 2 of Soylent Blue as an expanded flat. And when measuring the resulting Minor 1 wave it is precisely the same length as the current drop from the top of Minute {ii} (mislabeled on the chart – sorry) down to today’s low. May just be academic but what’s interesting is that the height of (c) of {ii) also matches the height I project for the current snapback. Again, pure mental masturbation – but I do love looking for patterns. In any case – I expect things to start rolling over again around the 1130 – 1135 mark. We should not breach yesterday’s highs, that would throw a monkey wrench in my current Blue count.

BTW, just for the record – look where I drew the target for Minor 2 on the last wave count update: 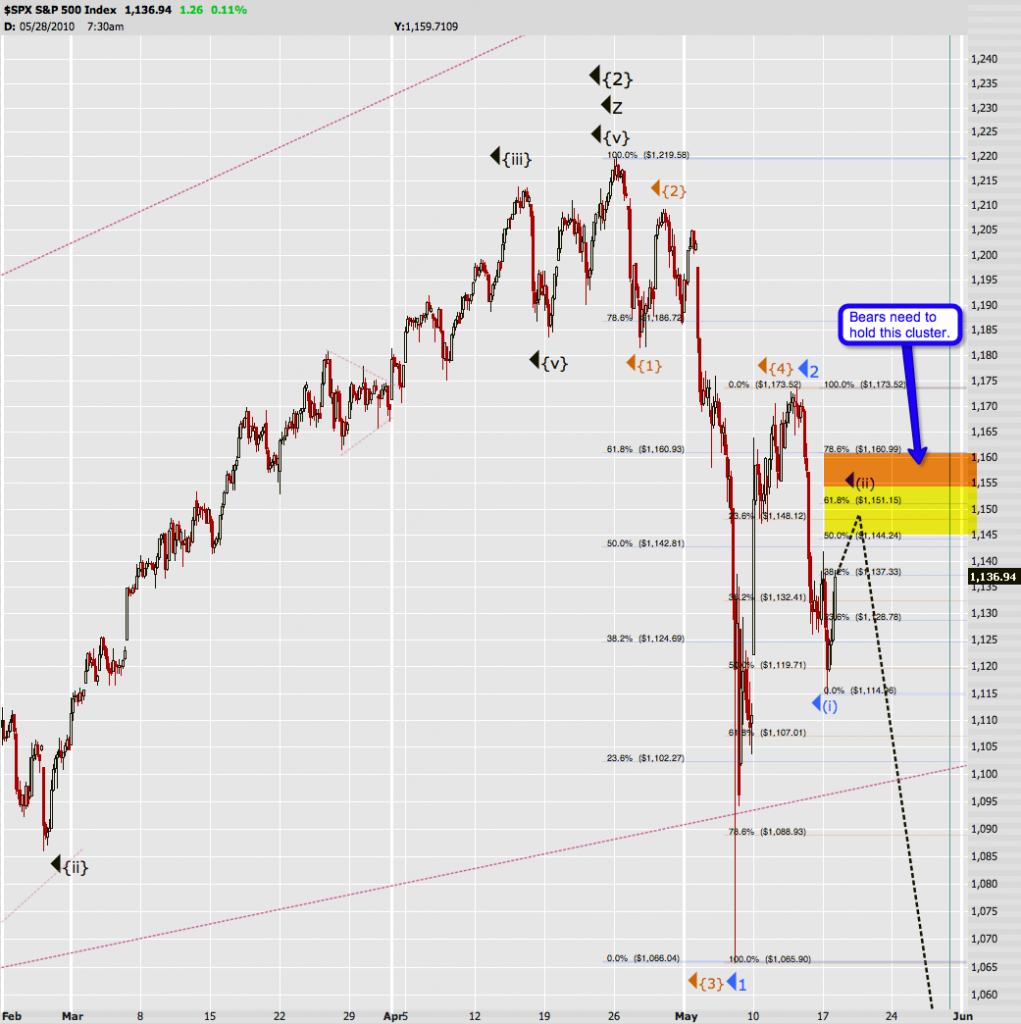 Not bad – ey? BTW, I’m sizing this down so you don’t confuse it for the current count.

Alright, now let’s get back to our medium to long term outlook: 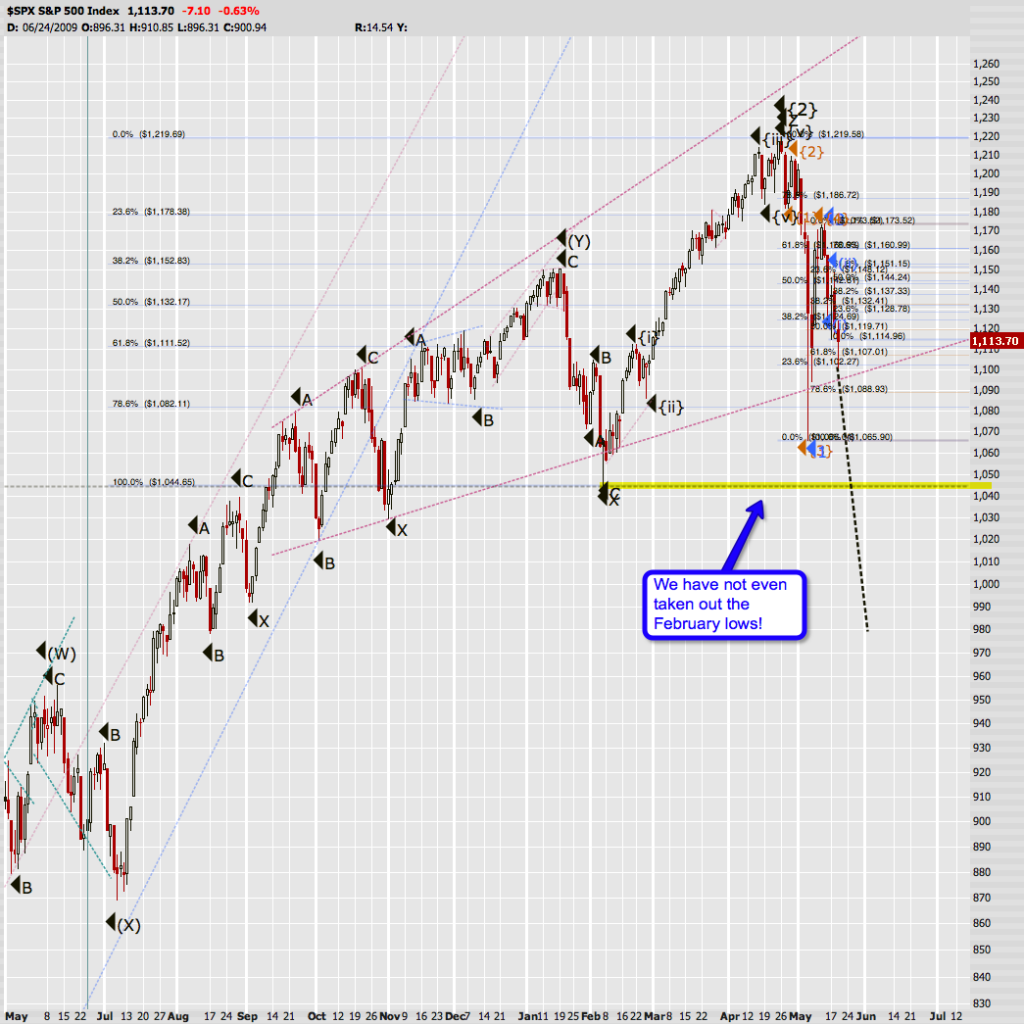 What I see here is but a humble rumbling in the force. Yes, we have had distribution and buying extremes but the bears yet have to give the bulls a run for the money. We haven’t even breached through the early February lows yet! 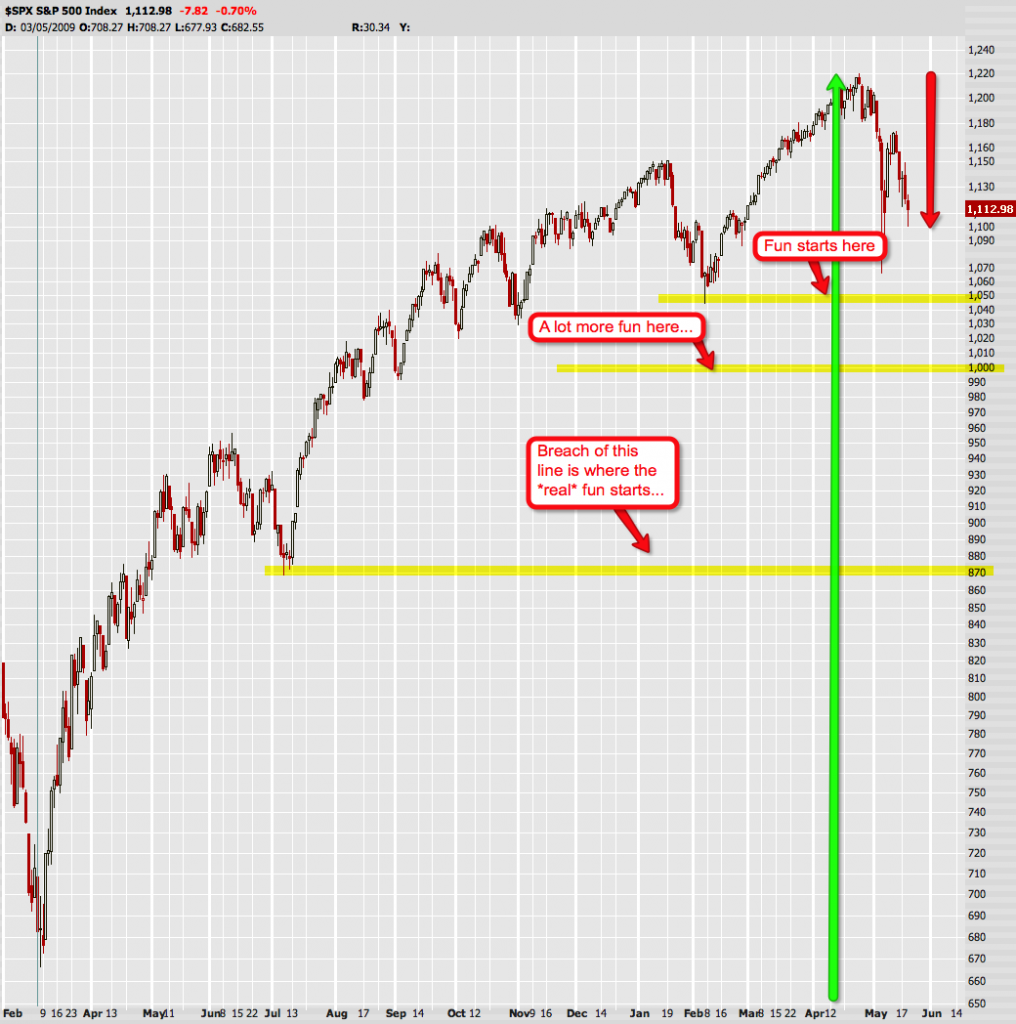 And this is the long term picture – I removed the wave labels to present a cleaner picture. Quite frankly – the bears feel like they are in control right now but they are really not. We have not taken out any of the pain levels I associate with a confirmation of Primary {3}. 1050 is one of them – we have been hovering above that one since late September 2009 now – time to take it out. Then there is the 1000 mark – which of course is meaningless if you understand hexadecimal or octal notation – but it’s a psychological line that needs to be destroyed. Finally we have 870, which is when fear will start kicking in big time – we are talking about a few months from now – after we sat through Intermediate (2) of Primary {3} when things are really starting to be fun.

So, what’s my point here? You guys need to be patient – very very patient. If you think your long term puts are worth something now – wait a few months. And we’ll probably cash them out at the bottom of Intermediate (1) and then reload at the top of Intermediate (2) – probably in early fall. It’ll be fun and it will be profitable but you cannot rush things – the pundits will fight back and there will be times when everything seems lost again. Don’t fall for it – think long term. 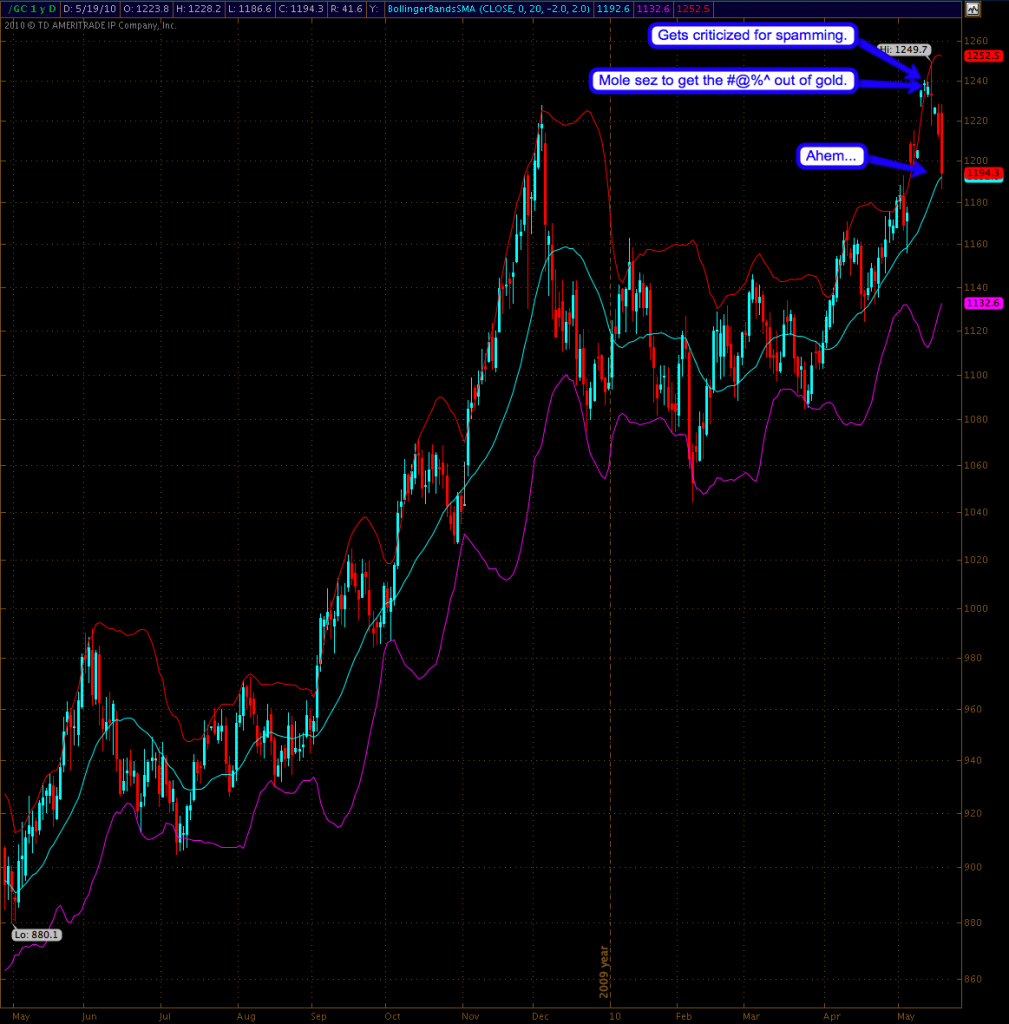 A mere week ago I looked at the fact that 97% of pundits were long gold (according to trade-futures.com) and told everyone to get the fuck out – in those very words. Well, I hope you faded the salivating calls of the gold bugs and listened to ole’ Mole, because the Gold chart above is a painful lesson in what happens when a market goes exponential. I was basically waiting for the curve to tilt backward and go back in time as I was spinning up the Flux Capacitor. 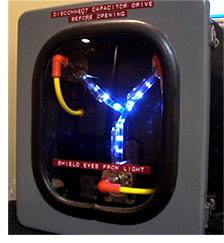 But the story does not end there. I posted a pertinent comment and a link on the Slope – where I also happen to be an occasional author btw – and got attacked for spamming and for my silly POV. Now, the majority of Slopers are great folks and I have no beef with T.K. However, it comes to show how turf wars can quickly erupt when you post something that does go against the opinion of a few pundits (who probably were chasing the tape up). Anyway, I made my point, bruised a few egos in my inimical way and then walked away. I’m not getting paid for convincing people.

BTW, just for the record. Even if gold was higher today it still would have been a good call. When you see a market head straight up or down – take profits – especially if you rode it all the way up. As Prechter keeps saying: The hate ’em at the bottom and they love ’em at the tops. Go figure – no wonder 9 out of 10 retail traders lose their shirts.