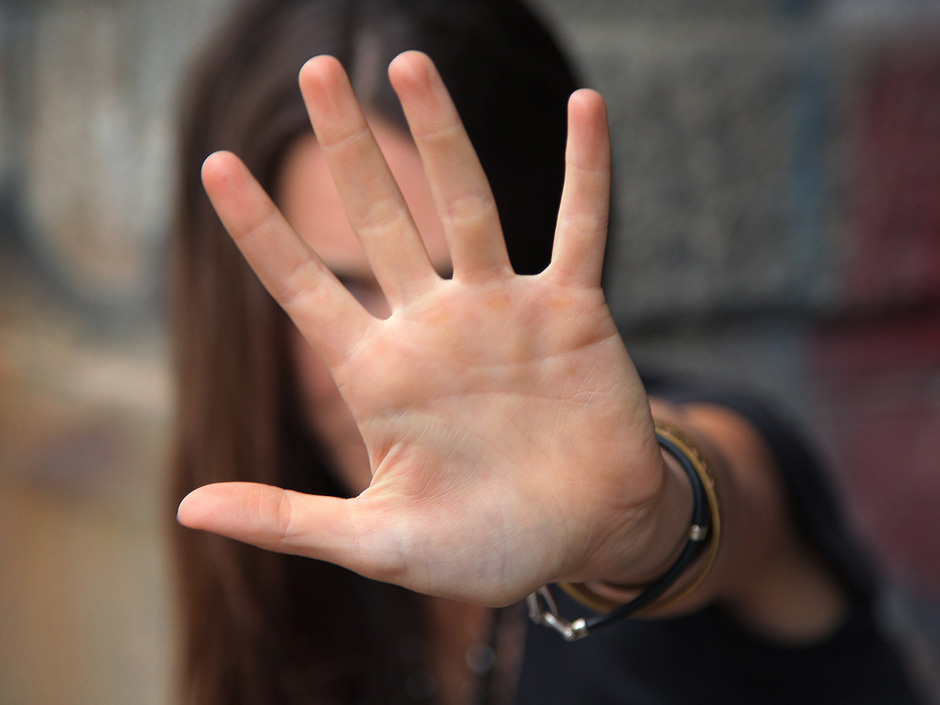 I came across a very nice expression today: Returns are made on the way up. Reputations are made on the way down. That’s a nice way of stating that (almost) everyone can trade a bull market but only the few select thrive in a bear market. In my not so humble opinion here are the two main reasons for that:

First direction, a lot of people for some reason have a hard time embracing the downside after having been cognitively conditioned to associate upside with being ‘good’ or ‘virtuous’. Second volatility, which takes the majority of trading systems to the ole’ wood chipper. 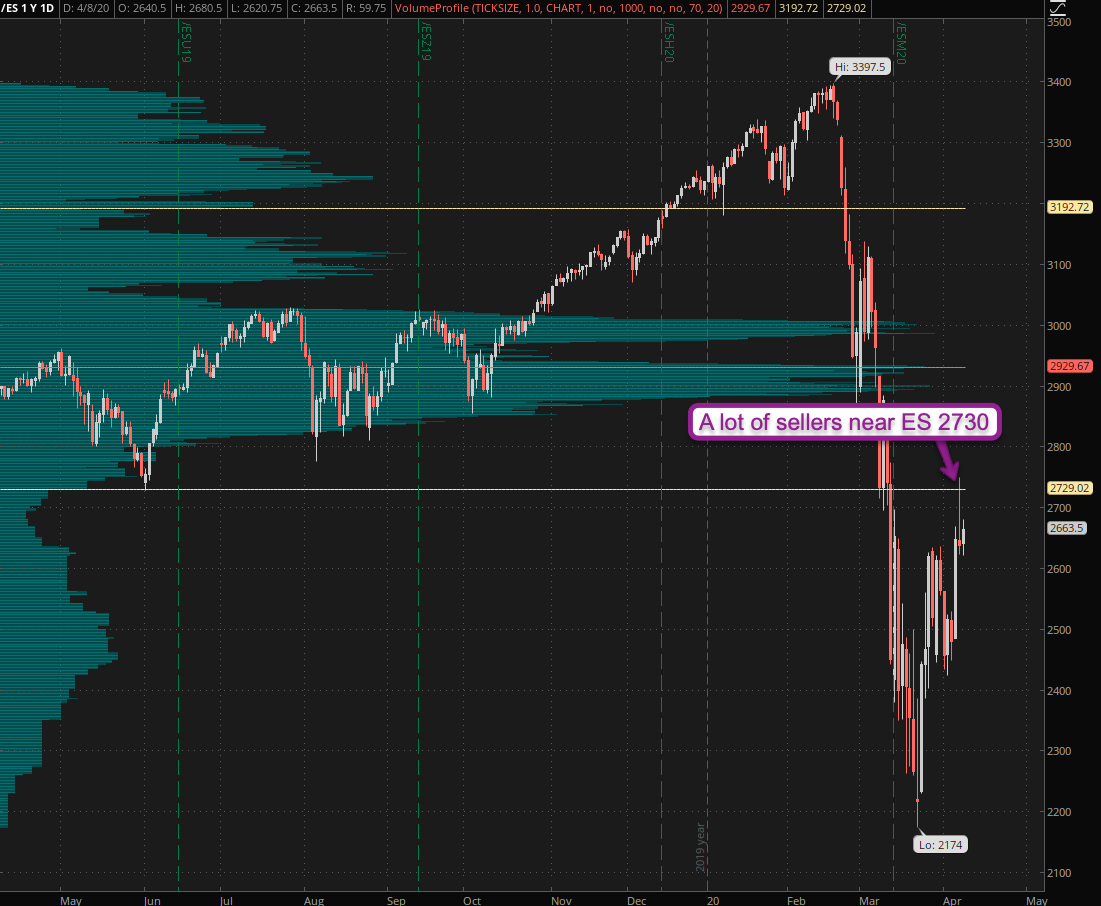 Which is another reason why I’m increasingly reverting back to trading options. Stops are difficult to place in bull markets already and the fact that two of my futures campaigns (DX and ZB) were stopped out yesterday once again confirms that a focus on selling volatility and time is far superior than trading direction in volatile conditions like these.

That big spike into ES 2730 was instantly smashed lower which suggests that we’ve got a cluster of sellers lurking above. And that rejection couldn’t have happened at a worse place as we barely had conquered a crucial volume hole between 2600 and 200. Not a good place to be right now. 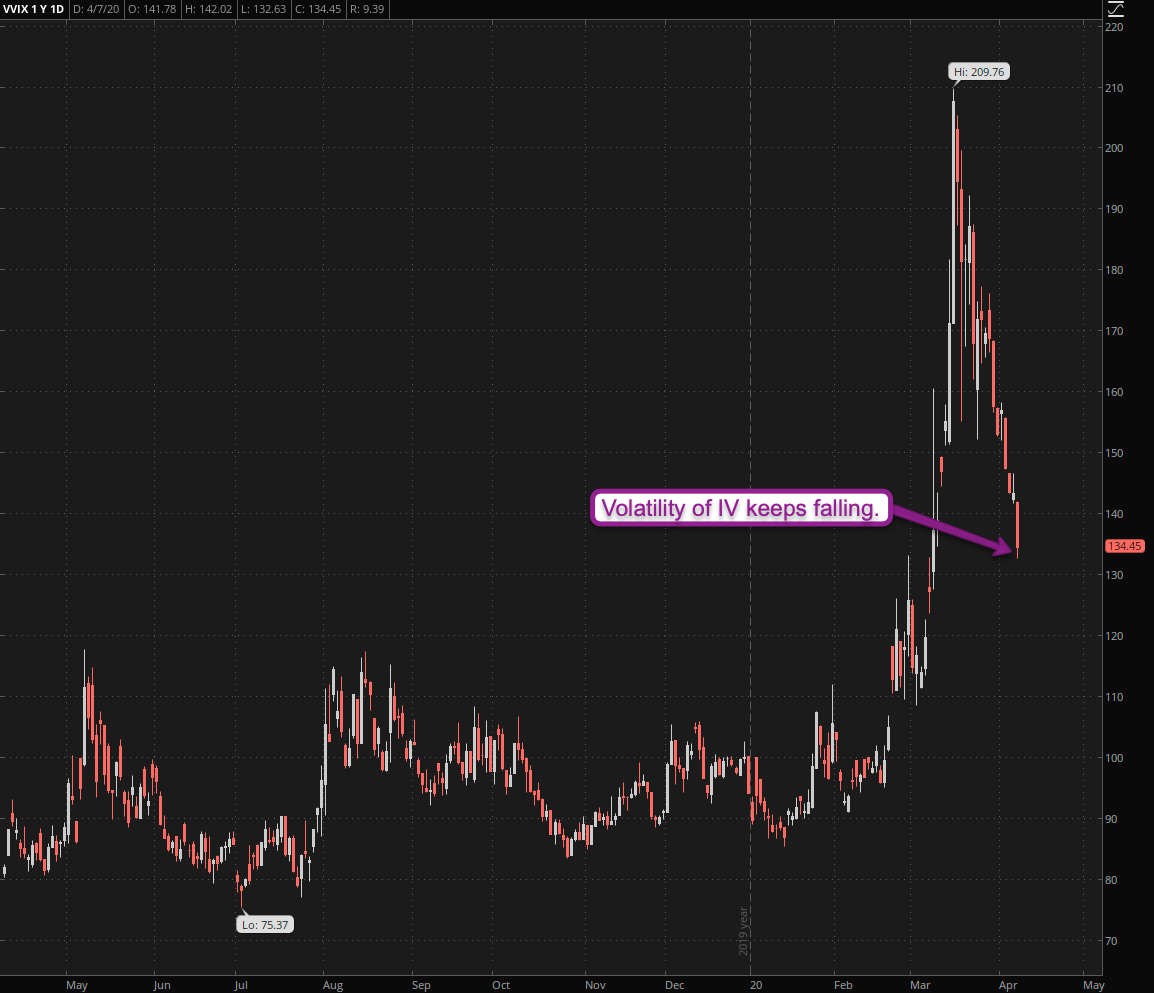 That said, things have been slowing down quite a bit. Here’s the VVIX which tracks volatility of implied volatility if you would believe it. You should because it does. As you can easily discern we’ve gone from a median of 90 to a reading of 210 of which we’ve now retreated about 50%.

The next question that probably comes to your mind is whether or not we continue to fall from here, right? Well, let me show you a few things that may somewhat curb your bullish exuberance. 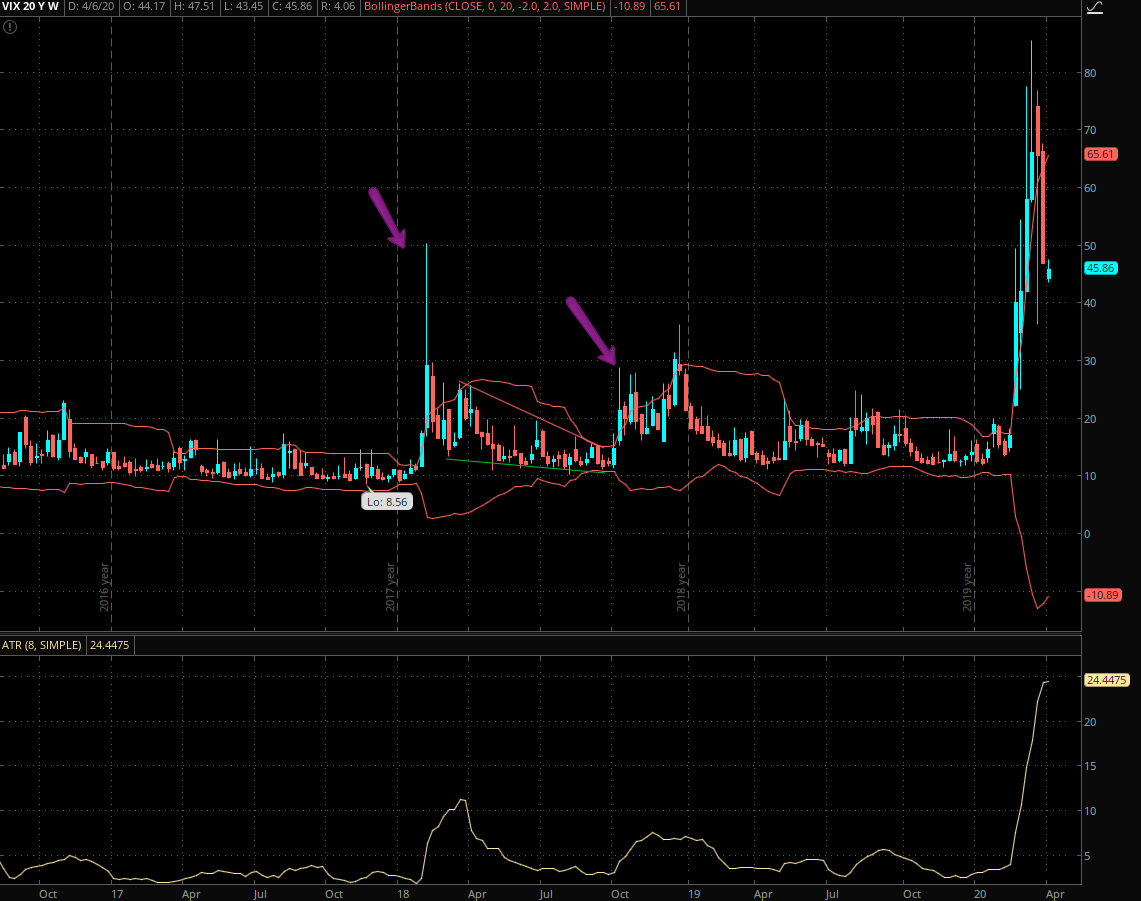 Here’s a daily panel of the VIX wrapped by a BB which shows us pushes outside the 2nd standard deviation. The big spikes I’ve highlighted represent times of uncertainty and fear. With the latter being the topic of focus here. 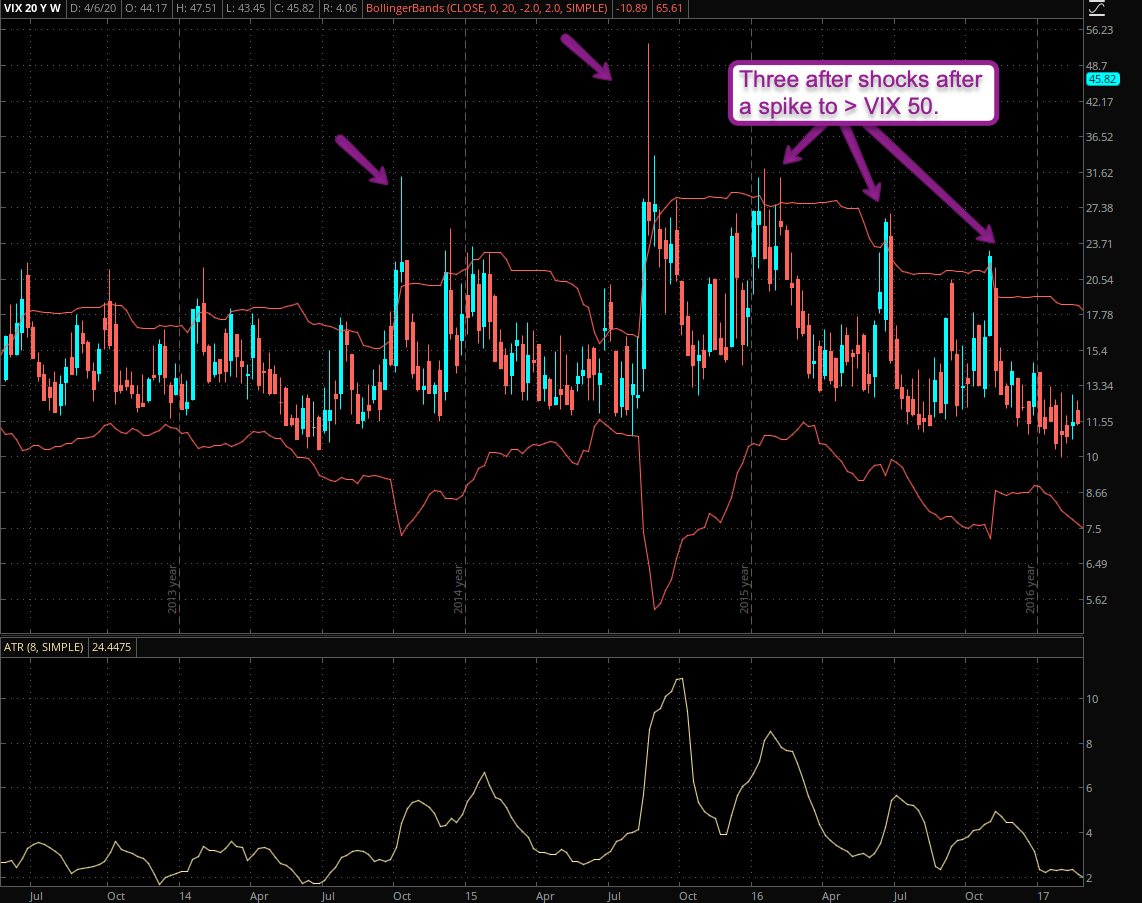 You see, fear doesn’t just disappear overnight. After a sudden shock people have a tendency to expect more of the same. Just like they expect more good times after a long period of prosperity. 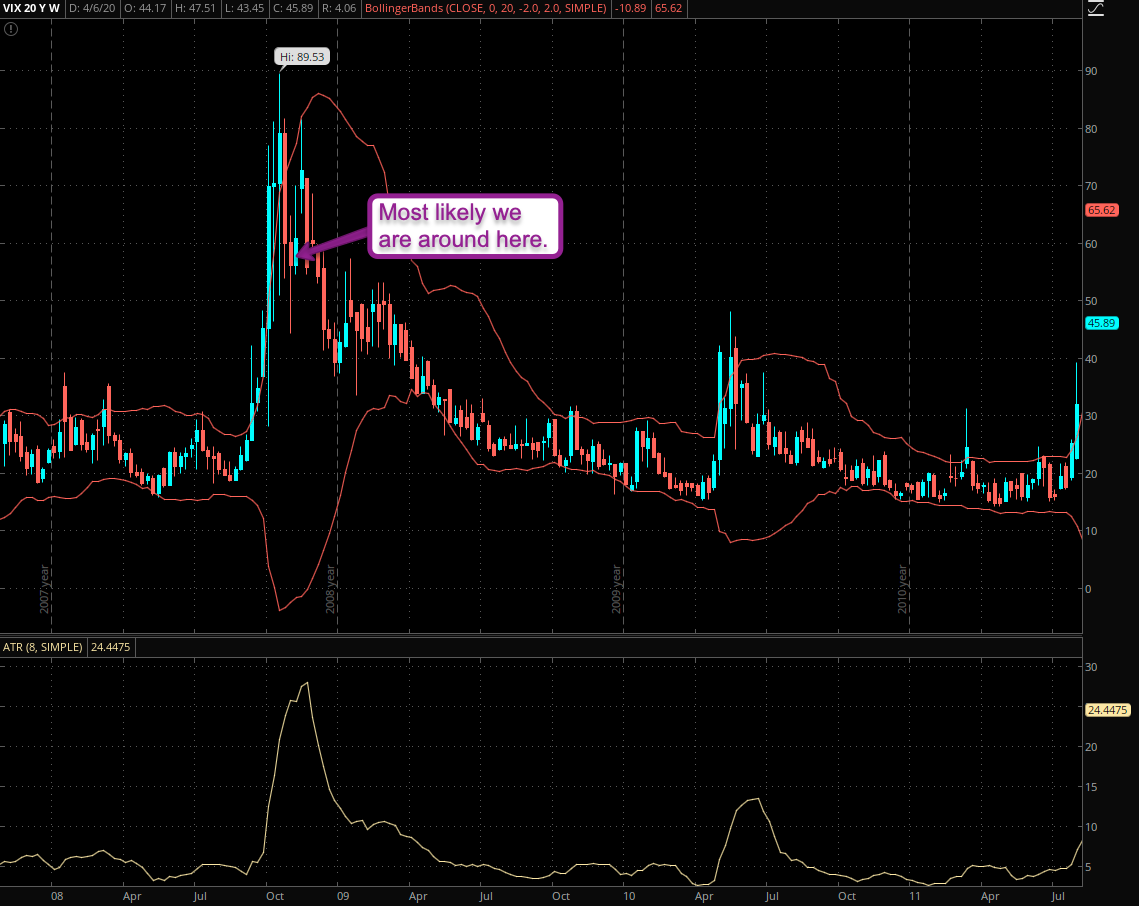 Which is why we usually see a reverberation resulting in additional IV spikes once a certain threshold has been reached. That threshold isn’t chiseled in stone and depends on the preceding long term median. But we can all agree that anything over the VIX 50 mark puts the fear of God in everyone’s bones. These spikes usually leave a mark on the market’s collective psyche for some time to come.

Shown above  is the 2008 IV spike that pushed the VIX to almost 90. Things dropped off fairly quickly, just like it did this time around. But as you probably recall from a previous post, that did NOT mark the low of the market. A few more rounds of selling occurred until it was all said and done and we found ourselves at SPX 667.

A few more equities related perspectives below the fold for my intrepid subs: