MENU
Sections
Login Register
Education
Now Reading
Did You Get Out Of Cocoa?
NextPrev
Contents
3723 23
74

Did You Get Out Of Cocoa?

A lot of people are very confused right now and who could blame them? All the while the tape has been dropping in the past few days we received a moderate UP trend day yesterday morning and low UP trend day alert today. A bit of a head scratcher and things seem a bit out of whack. At the same time the Zero shows sign of a systematic long squeeze – the reason I’m suggesting that is the velocity of the current stair step pattern to the downside. It simply feels unnatural – after extremely bullish sentiment you usually get a reset or wipeout of some kind. Downside corrections move at least twice as fast as advances due to raging emotions involved. You don’t just correct down like this and then continue on your merry way. Well – it has happened in the past at several occasions but it’s not tape I particularly enjoy or want to be involved in. I do have some thoughts on what may be next – more on that below. 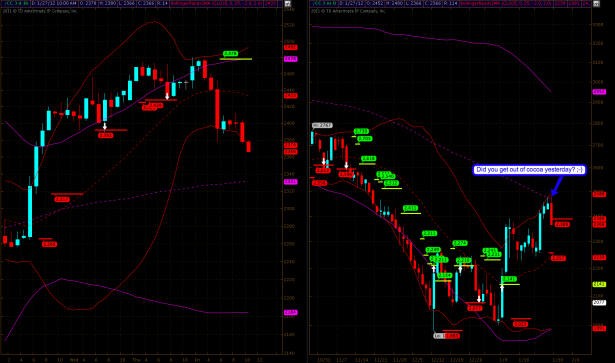 But before we get to that I must ask: Did you get your butt out of cocoa yesterday when I suggested to take profits? Well, if you did not then you’re really feeling it today and if you did then you are smiling all the way to the bank.

How do I do it? Evil black magic of course! BTW, I’m running out of young willing virgins over here in L.A. – any volunteers?

Now we even breached through a daily NLSL but I don’t like that setup and won’t be taking it. Rather I would be long on a retest and recapture of that NLSL and in particular if we push above that 100-day SMA. 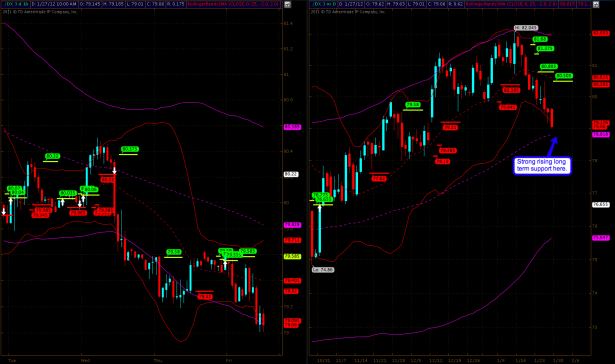 Instead of wasting my time with equity charts I instead follow ole’ bucky, currencies in general, copper of course, and the AUD/JPY. And if you are short the Dollar then I suggest you cash out and spend some of your ill gotten gains before your wife learns about it. The really really interesting perspective however is the long term – please step into my dusty lair: 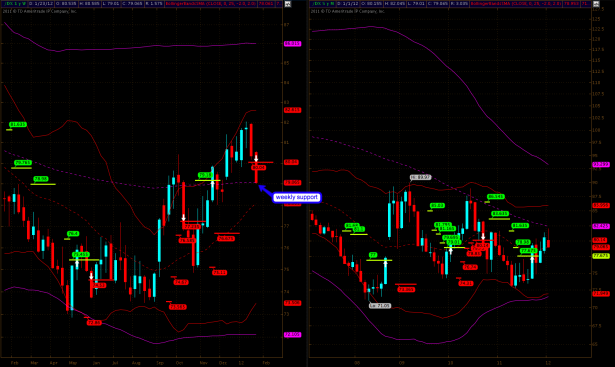 The weekly panel shows us sitting right on the 100-week SMA and that better be good for some support. IF that one gives then I think ole’ Mole is going to shed a bucket of crocodile tears when exchanging Dollars into Euros this spring. I really have to start charging you guys in Euros, damn it! 😉

Anyway, all joking aside, I want to drive home here that this is an important inflection point for the Dollar. If 79 gives then we are most likely visiting 78 or worse. 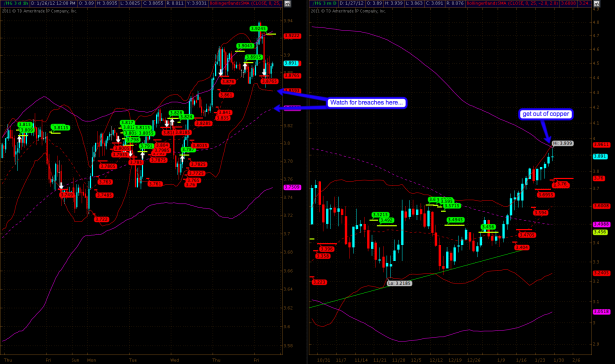 Copper is at target – I think I’ve already suggested scaling out yesterday. Today I’m telling you to get the heck out – hell, you may even venture a short position here. 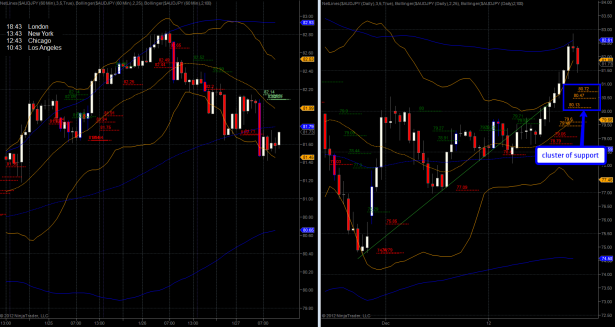 AUD/JPY is back inside its 25-day BB and there is a cluster of support almost exactly one handle below from here. Frankly, I don’t think we are making a b-line to there right away. What I think may happen is a RTV sell pattern and a drop thereafter. Which brings me to something Volar posted earlier today: 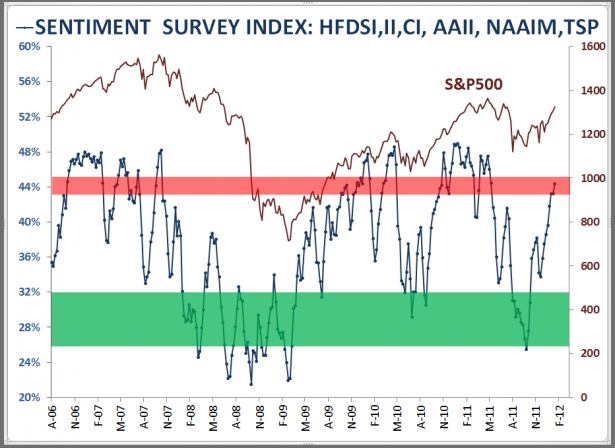 This is a sentiment medley made out of:

And this is what Volar said:

My sentiment index (6 surveys) I guess it could be extreme – but this is the most extreme i have ever seen it for a market that has yet to make new highs.

Sentimentrader did a piece on that too:

Something notable about our current situation is that the S&P 500 is not sitting at a 52-week high.  That has made a difference. Here’s how the S&P performed over the next 2 months when the 4-week Bull Ratio reached this kind of extreme, broken down by whether the S&P was at a high or not:

There was a stark difference in performance.  When the S&P hadn’t yet moved up to a new high, it showed a positive return only 4 of the 12 times, with a nearly 4-to-1 risk-to-reward ratio during the next couple of months.

So, if you remember all those divergent momentum/sentiment charts I posted a while ago then the long side is starting to look very iffy here. And then there’s the VIX sell signal (admittedly partially invalidated but let’s see). And to add fuel to the fire there’s Volar’s and ST’s quant data pointing down on a medium term basis.

But I don’t think it’s all going to happen in one wash. Yes, the Dollar is running into support and we are near February, a seasonally brutal month for the bulls. What we may see here however (and you can tell I choose my words carefully) is a quick push higher followed by a more sustained drop in February. This would hurt any late in the game beartards and also burn many BTFD bulltards.

Of course if copper starts dropping and the Dollar pushes up then we may just drop like a rock, so if you are playing contrarian I suggest you watch those two charts like an eagle. And there’s the AUD/JPY – it’s been bullish all the while equities were slowly lead down by the noose. A sustained drop toward 81 may just accelerate things on the equities side.

Otherwise all our currency setups moved the way I suggested, gold and silver are continuing higher. I keep maintaining that you adjust your focus away from equities and into selected currencies and commodities. Give it time – maybe continue reading here for a while – ask questions on the blog. Afford yourself the luxury of picking your markets – even if things look iffy on the equities side for stretches of time – there are almost always good trading opportunities out there.