How To Escape The Squeeze Box 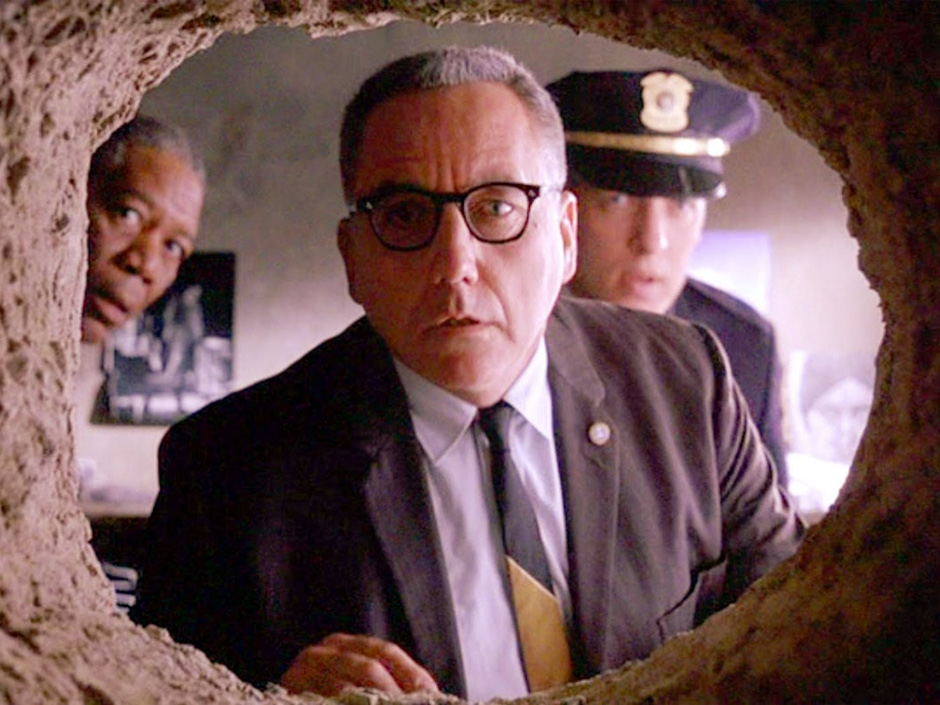 A longtime subscriber wrote me the other day thanking me for the opportunity to grab $TLRY right before it kicked into short squeeze mode and exploded higher. In his words: “Not sure if you’ve seen but $TLRY short squeeze is in full blow status. It’s now pre market at 65ish. The only reason I got into it was because I followed your Short Squeeze setup. I got in at 22.61!! I only had a small position, but it’s going to pay for the cost of the strategy probably about 3000%! And it was a textbook entry on your system.”

Now I’m super glad he got in at the perfect spot and banked some mighty coin, but at the same time I really hope he also got OUT in time. Because just like with gravity and airplanes, what goes up must eventually come down. And that spells double true for hype driven short squeeze plays.

So let’s assume you just nailed a textbook squeeze box entry and much to your delight you’re watching the stock take off in a face ripping super rally. Odds have it a few nagging questions are now rattling around in your mind: 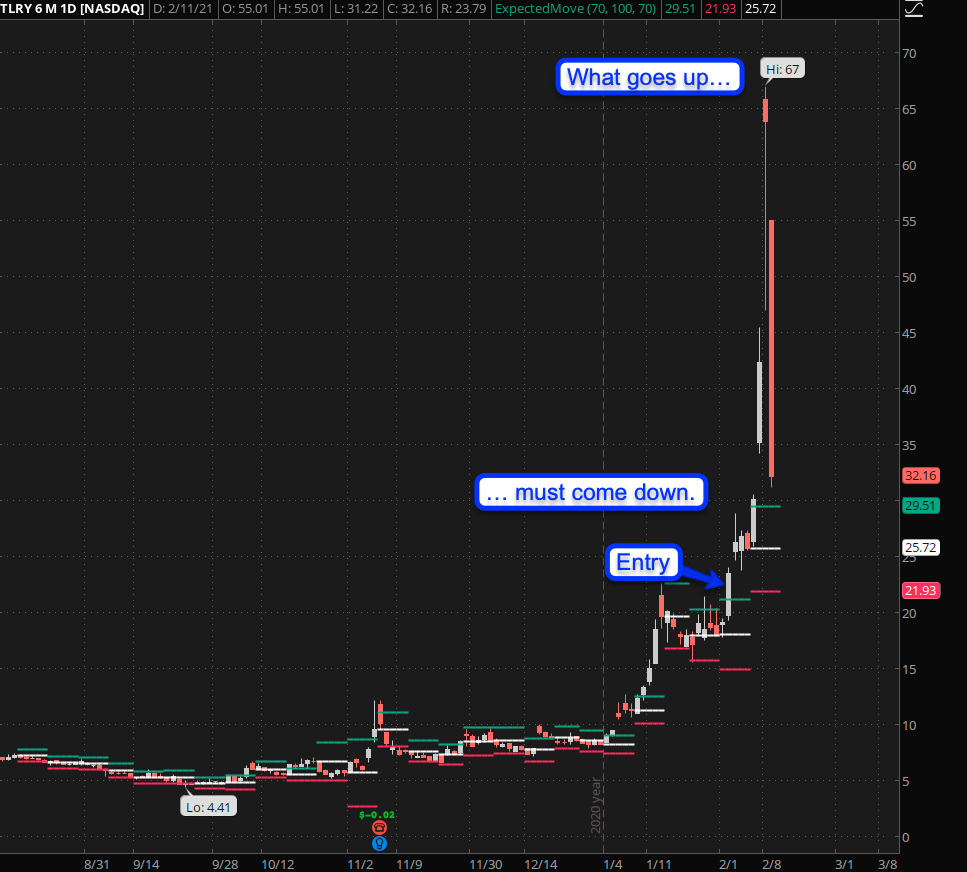 Let’s start with #4 and work our way backward. I’ve pointed to the entry my subscribe took to give you an idea of a) his entry and b) where he probably placed his stop, which per the squeeze box rules is around the 16 mark (i.e. the spike low).

If he still is in this trade then he basically qualifies as having giving away the bulk of his paper profits. NOT selling at the 60 mark or above after such an explosion higher is unreasonable, and that’s putting it lightly. But why?

Some of you have watched my Price Action Masterclass and can probably answer that question. Three huge gaps followed by what clearly is an exhaustion candle in a HV short squeeze are several harbingers of a sell off about to unfold.

Which is why you get out and thank the Lord for having bestowed you with the testicular fortitude to hold out this far in the first place and not to jump ship a long time ago. And if you had you would have been in your complete rights as a trader to do so. 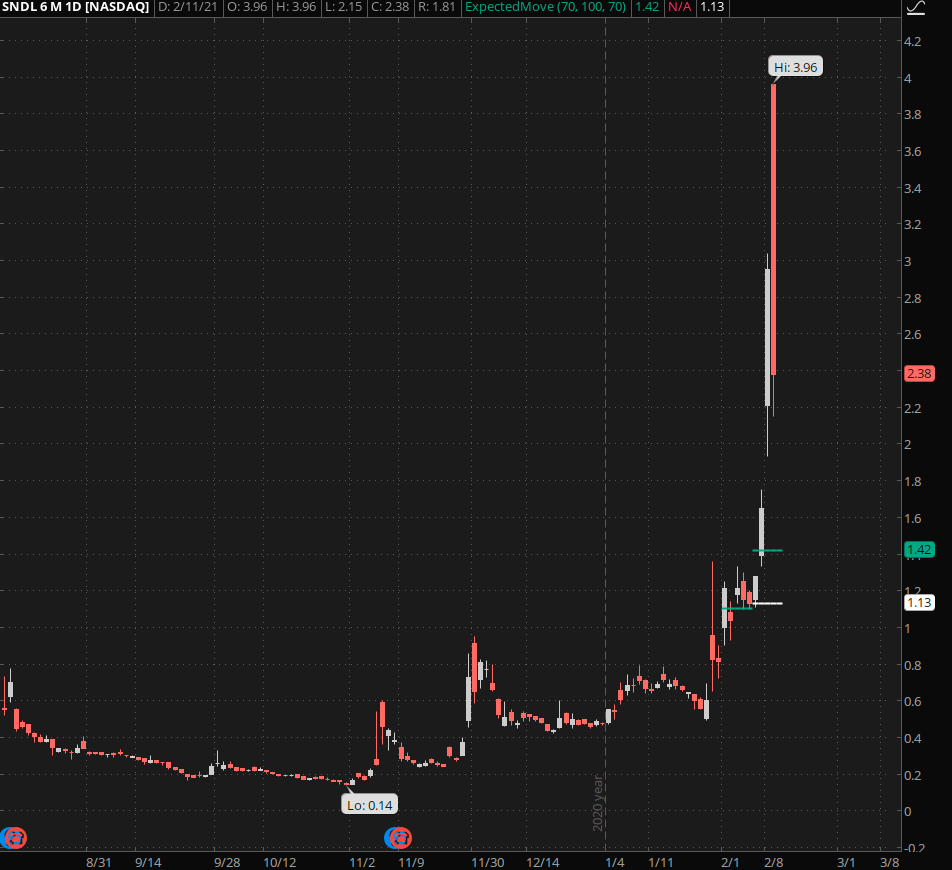 To answer # 3 here’s another example (I didn’t trade as my criteria weren’t all satisfied): Where do you think SNDL goes from here? To $1.6 or back to the $4 mark? Odds have it the bulk of the move is over and at minimum you missed a great exit opportunity with the potential to buy back lower. 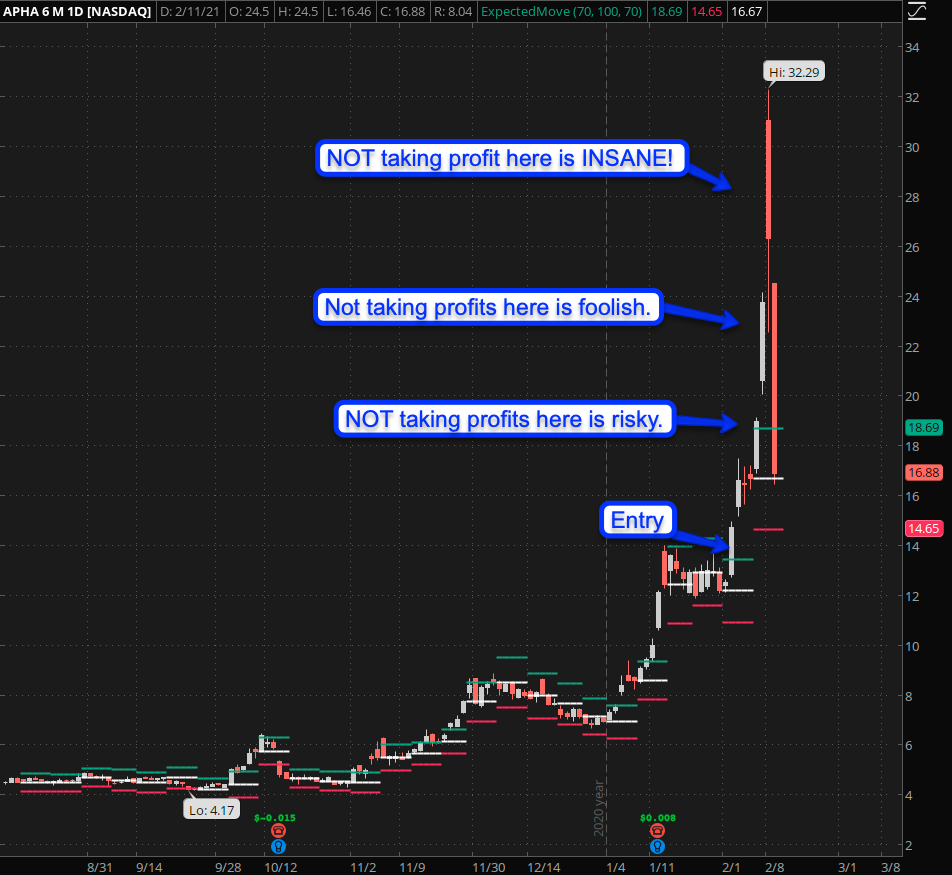 Let’s use APHA as a ‘paint by numbers’ example. This is actually I did take and rode all the way into… (drumrolls)

Yup, you read that right and I’m still ecstatic about it as it banked over 4R in profits. I could have made a LOT more but then again, I’m not a gambler.

Here’s my reasoning: As soon as I see large gaps on the way up I am OUT as there NEVER is any predicting how far a short squeeze is going to run. Do I see an issue with keeping a quarter of the shares or perhaps as much as half in the running? No, it all depends on your risk tolerance and trading goals.

But not at least taking partial profits after a 4R run is simply foolish in my book and that of most any serious traders I have come across.

So I just answered #2 and #1 – but what I have not shown you is a structured way to gauge a proper exit AFTER a rally has rolled over and is on the way down.

For more details on that and ore please step into my lair:

BTW, if you bought the Squeeze Box System then you may want to swing by our friends over at Financhill (they are good guys and allowed me to run a white label version for Evil Speculator). Little did even I know that they got a kick a$$ short squeeze list which is being updated a lot more frequently than the one that Finviz is peddling.

If you snoozed and missed out on grabbing the Squeeze Box System at half price then here are some good news for you: The full price of $199 is really more than reasonable for what it offers. So if you like to trade explosive breakouts Gamestop style then quite the hemming and hawing and get your own copy of the system now.

Monday is Washington’s Birthday and therefore my next post will be on Tuesday, February 16th. Here’s me wishing you all a wonderful extended weekend.