Volar’s post was a good representation of the ambivalence that Scott and I are having for the current tape. And yes, today we did indeed see some follow through on Friday’s drop. We have now arrived at a point where I would expect some support and emergence of dip buyers on the equities side: 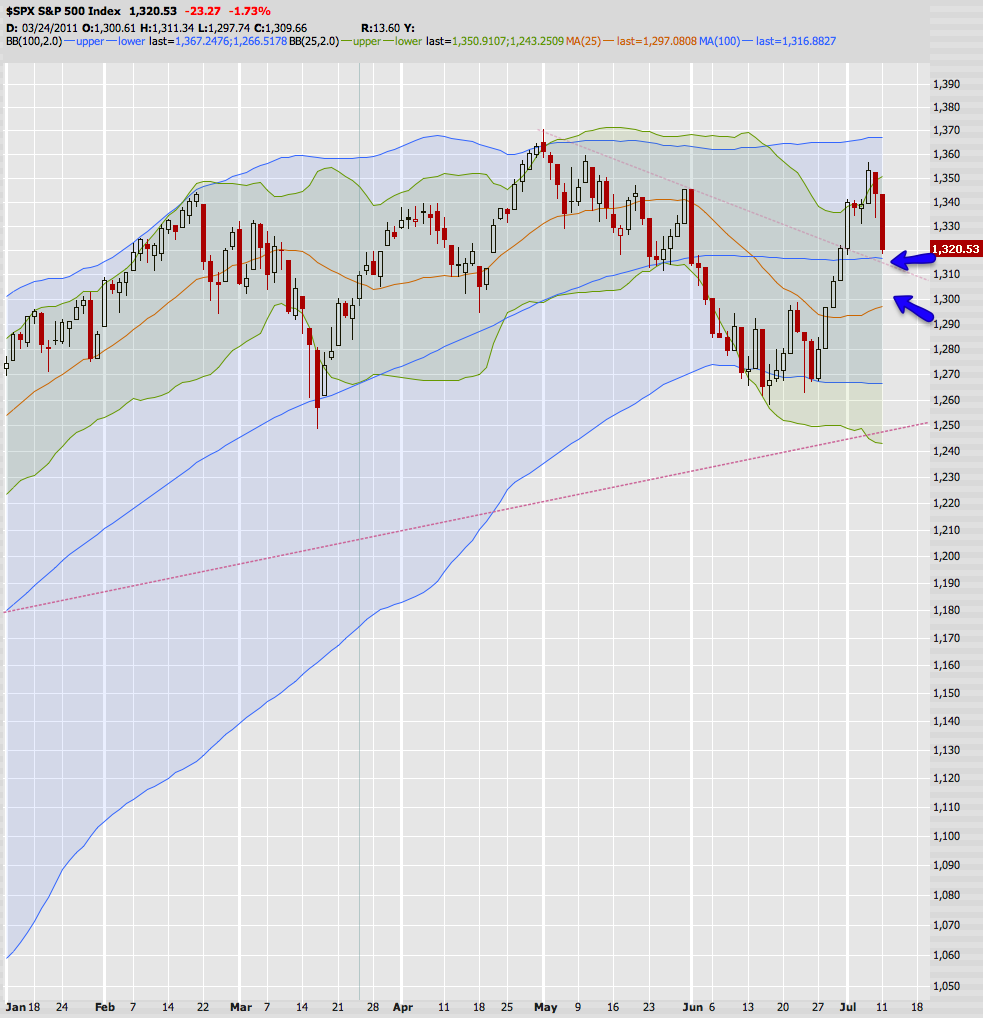 Now, if we breach 1320 – which incidentally was the level I suggested last week then we drop toward 1300, which of course is a psychological number the longs will want to hold (plus there are stops looming below at 1298). I’m giving each scenario 50/50 odds at this point which I know is not much help to you guys. So let’s peel the onion a bit further. 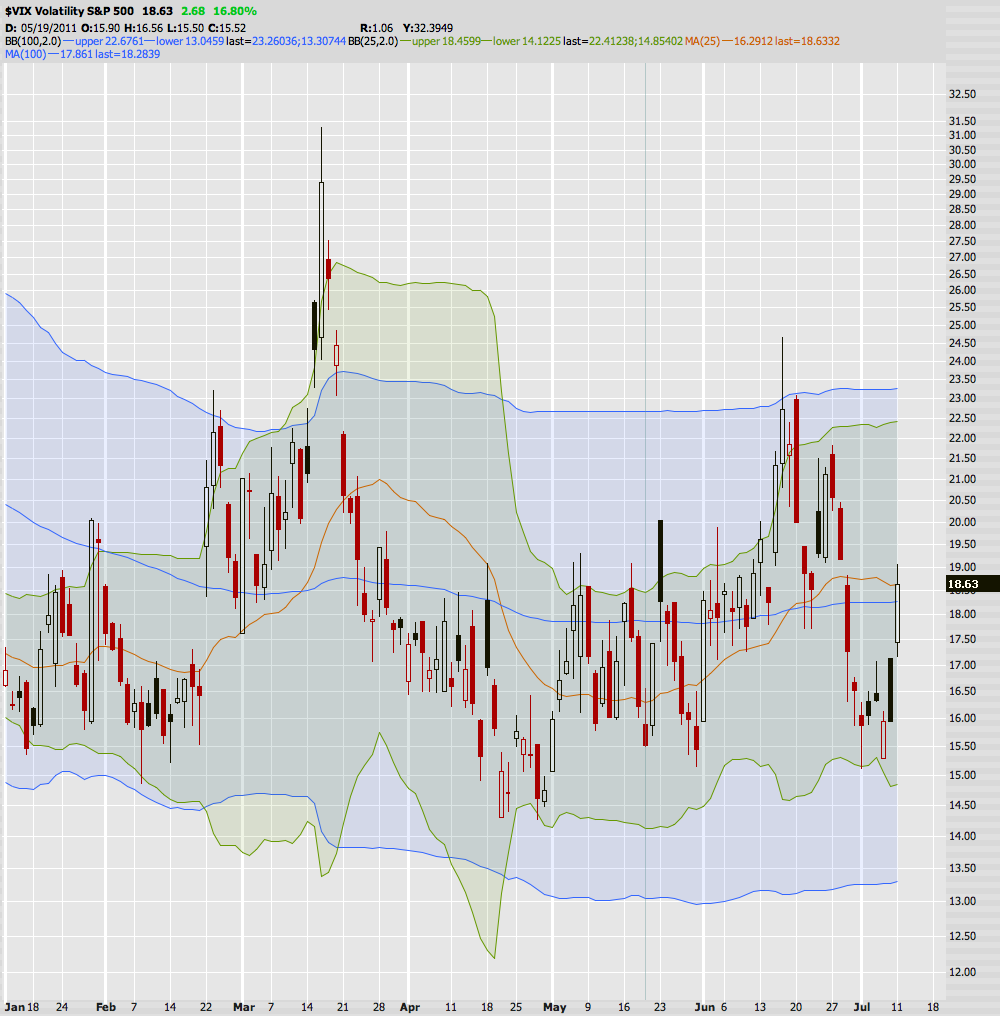 Mr. VIX tickled both its 100-day and 25-day BB and for now recoiled. I don’t think it’s impossible that we’ll see a close a bit higher but I also recall the volatility game the big longs played on everyone over a week ago. A further drop in equities accompanied by a close below the VIX 19 mark may be evidence that dig buyers are already getting positioned to put on a big squeeze.

But there is a lot more going on underneath the hood today, so let’s take a look at the real meat:
[amprotect=nonmember] Charts and commentary below for anyone donning a secret decoder ring. If you are interested in becoming a Gold member then don’t waste time and sign up here. And if you are a Zero subscriber it includes access to all Gold posts, so you actually get double the bang for your buck.
[/amprotect] [amprotect=1,13,9,12,5] 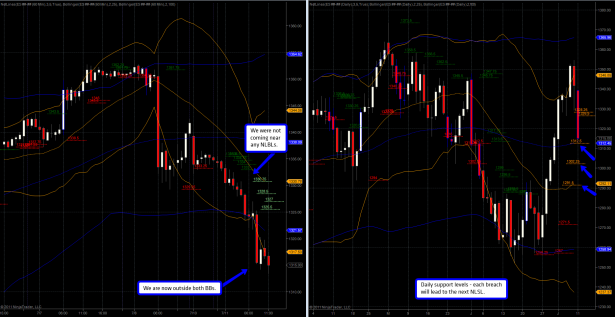 The view on the 1hr/1d Net-Lines combo is quite fascinating. On the daily chart we are nearing support at 1312.5 and a close below would probably get us to 1300 on the SPX (always remember the PREM delta). On the hourly side I see a very nice setup – first we were outside both Bollingers are now barely inside the 25-BB but we also might have ourselves a variation buy setup here (perhaps Scott can chime in when he rolls out of bed). 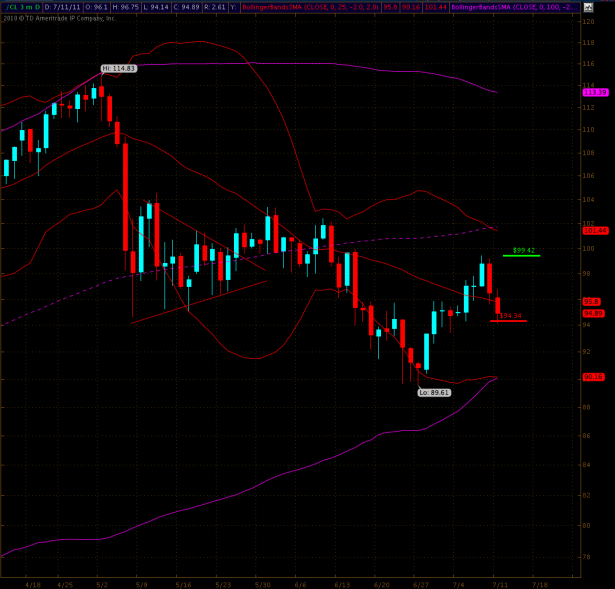 Crude has been dropping along with equities – now nearing support at its NLSL. A close below may get us to around 91, so keep an eye on that level. 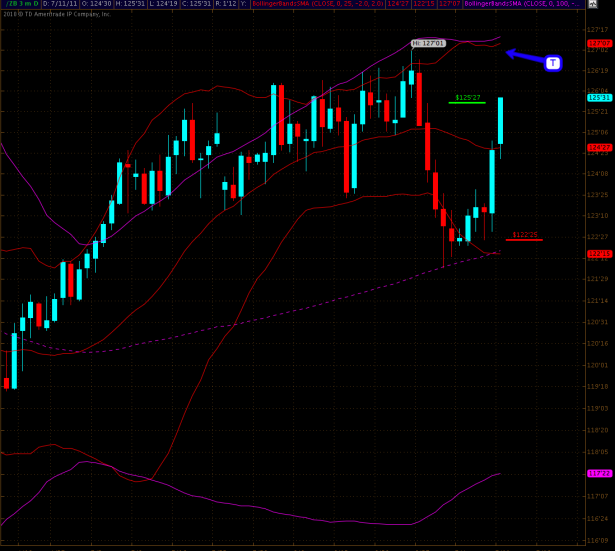 Over the weekend Scott and I both kicked ourselves over the big move we missed on the bond futures side. This is the 30-year and today it even busted higher. Seems to me we’re pushing to 127’00 here. 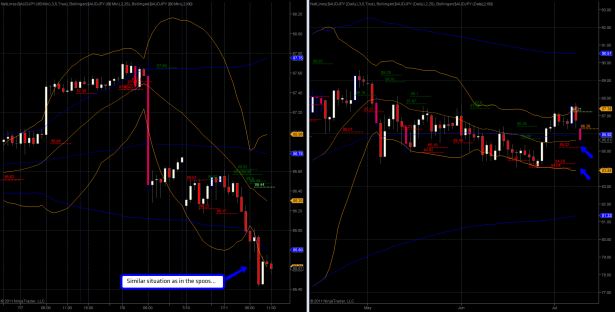 Currencies – the AUD/JPY is in a similar situation as the spoos – not as much support on the daily panel but a counter push here is possible. If it does not happen then remember Scott’s rule – if something is supposed to happen and doesn’t then we’ll probably see a violent counter reaction (i.e. a drop much further). So holding the current line is rather crucial and will most likely affect what’ll happen on the equities side. Recall that AUD/JPY and equities are highly correlated. 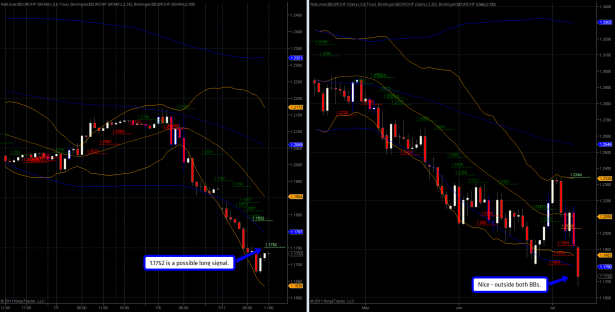 The daily setup on the EUR/CHF is quite delectable – the money shot would be a close above the hourly NLBL as indicated on the chart. 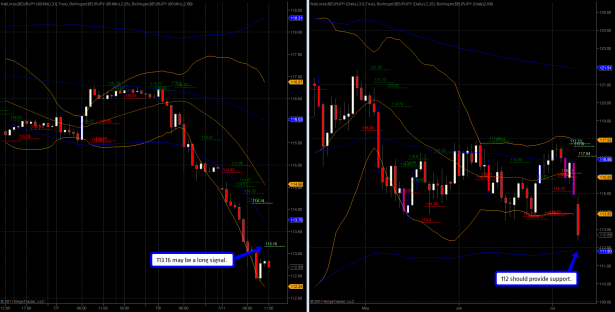 The EUR/JPY is not as extremely stretched but could also paint a nice buy setup, assuming we close above the NLBL shown on the hourly. 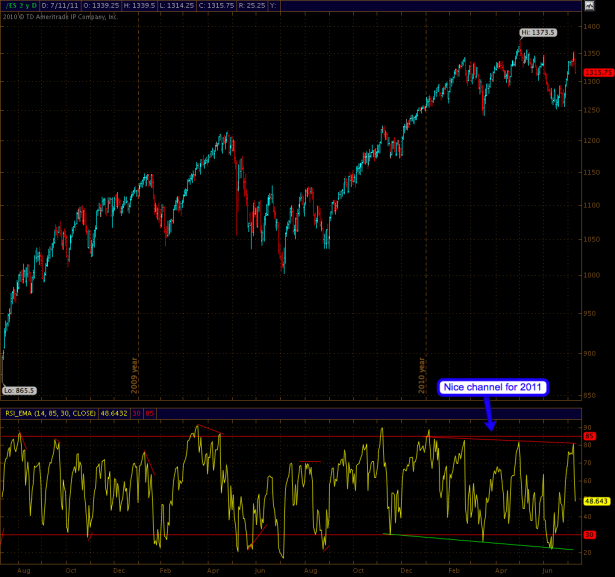 I’m closing this post with a long term perspective – this is my trusted RSI_EMI chart which now appears to be painting a beautiful channel, which is slightly shifted below my traditional 20%/80% extremes. Based on this the possibility of a continued drop is there but as shown above, we are now at support levels that would first have to be taken out. If that happens it’s quite possible we push a bit lower, but let’s not jump the gun right here and right now. Let’s wait and see.