Alright, you are not going to like this, and I have to apologize in advance for scaring the living daylights out of you. Maybe it is nothing but I see increasing and alarming evidence that needs to be presented so that everyone can prepare properly. Quite frankly, the hair in my neck was standing up when I saw today’s reading on the NYSE A/D ratio. 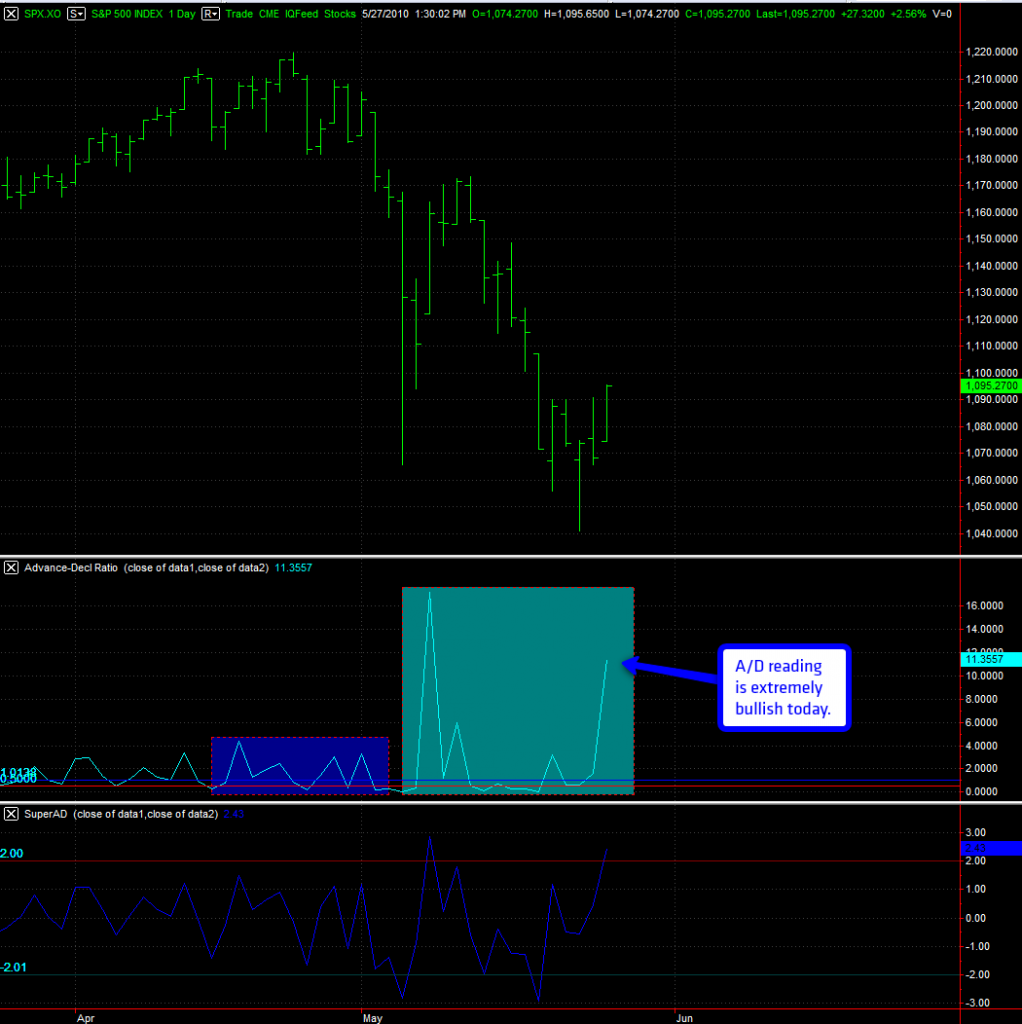 Now I have serious doubts that we are going to close at 11.3 x but I think we can reasonably expect a 7 or 8. BTW, you may recall why 8 is afraid of 7… Alright, not funny, I’m just trying to make the news a bit more palatable. Please make sure you are sitting when I show you the only other matching fractal I found: 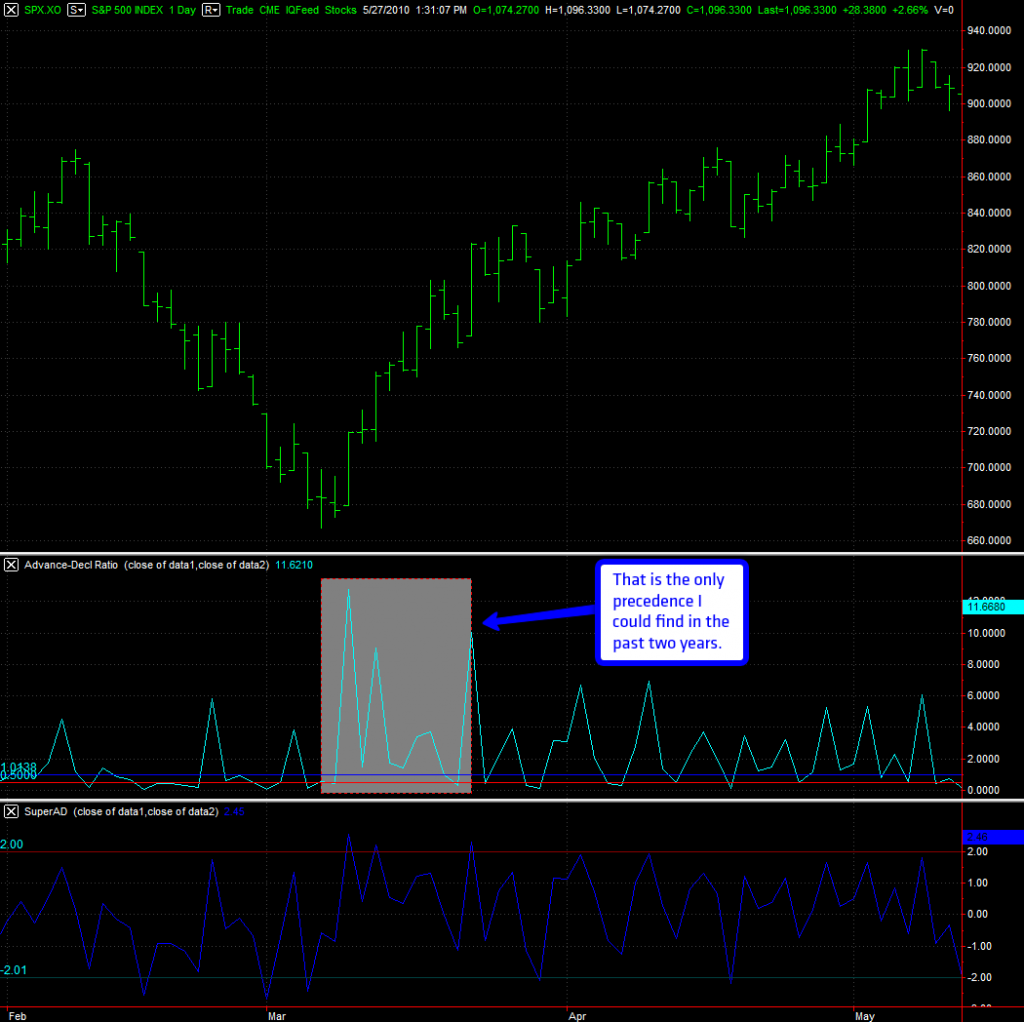 Yes, that’s right – the only prior occurrence of that pattern I found was the March 2009 low. Yikes!

Now, does that mean we’ll get a few more months of rally and then maybe a drop? Meaning will your long term puts be worth jack by the end of all this? Maybe…

What do you mean, maybe, Mole?

Well, it’s impossible to know – because you get those super exaggerated patterns at the onset of a new Primary wave. There will be violent snap backs and they will try to throw you off the horse – I mean just look at the gaps on the Spiders in the past month. These days when I wake up and see an open without a gap I wonder to myself – what happened?

So, if you know jack, Mole – what are we supposed to be doing here? Should we dump our long term puts?

Great question – glad you asked. See, this touches on what I have been saying for months now. In order to play Primary {3} down you need to be prepared for some violent whipsaw. I mean today is nothing in comparison with what’s coming. Are you prepared to watch your December or March puts go to almost nothing? Just a month ago mine were worth jack and just a few weeks later they had exploded to 8 x their premium.

I’m sorry to say that there are no guarantees in the market. In order to survive this battle you need to adopt the disciplines of bushido and be prepared to die in battle. Because if you think you can trade this one the safe way I have news for you: You can’t.

You have to think like Samurai Jack to make it through. Personally I prefer Toshiro Mifune, but most of you cats wouldn’t know what the heck I’m talking about. Suffice to say that I have weird taste in movies. 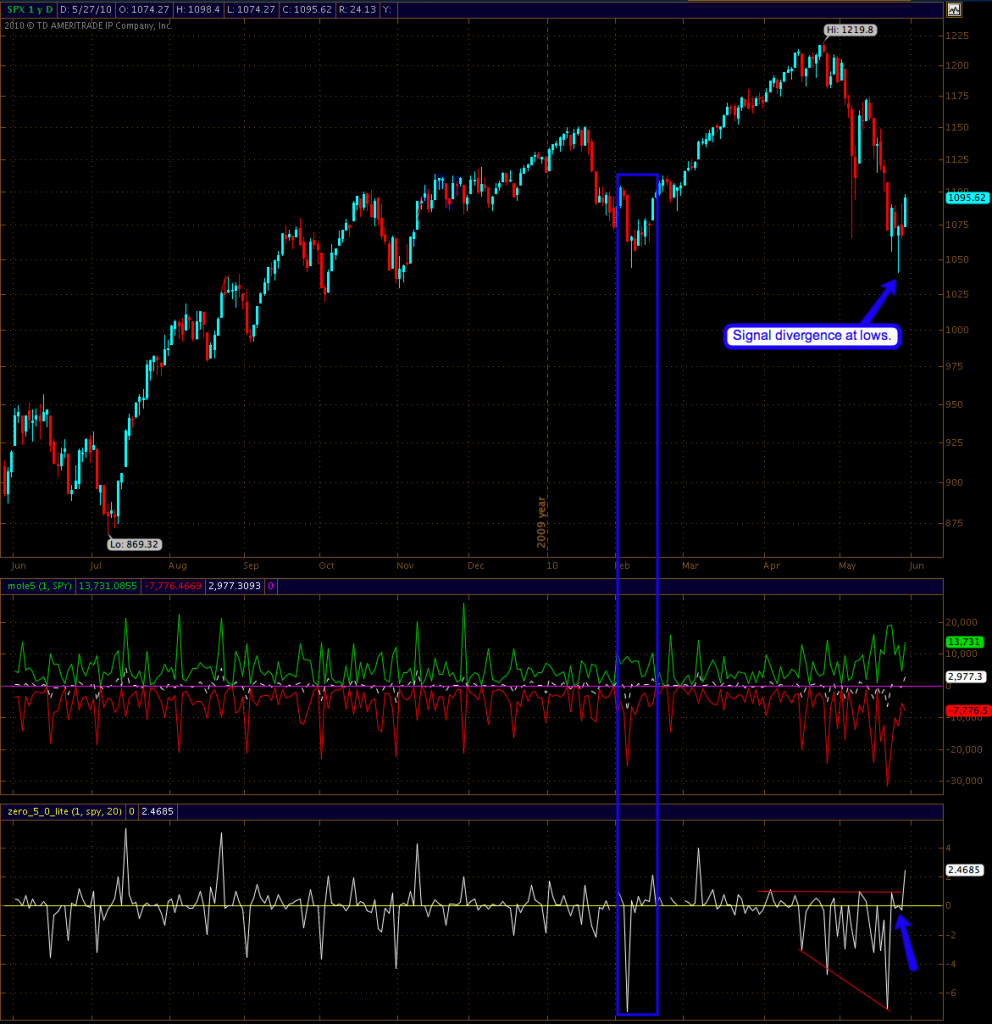 Here’s a snap shot of the daily Zero. What I see here supports the idea that we may be dealing with what eventually may be counted as Minor 2 of Intermediate wave (1) of Primary {3}. How far can a second wave correct? All the way, baby – technically. I personally get nervous at the 61.8% mark and cut the cord at the 78.6% fib mark.

Okay, so you are suddenly bullish?

No, not at all. I will hold my Dec 65 Spider strikes all the way – either they expire worthlessly or they’ll buy me a mansion or two. Why? Because those are my lottery tickets – I have made that clear. Based on what we know right now there is no guarantee that we won’t drop like a rock tomorrow or next week. As a matter of fact I am banking on that. But I want you guys to understand what you are possibly up against. This way you won’t ask me later why I didn’t tell you beforehand.

So, this is like a Zen riddle. Mole sees some bullish warnings but remains bearish. Exactly. Reason being that I expected to see monster fake out moves that will eat you alive. You cannot trade your way around them, well – most of us can’t. The only thing we can do is to understand our odds and place our bets accordingly. Today I am telling you to be prepared for the possibility of a nerve rattling rally.

Well, we should know pretty soon. If this is any consolation – fake out patterns usually resolve themselves within a matter of days. The move fast and resolve fast (case in point: Sept 19, 2008). Also, don’t forget that Monday is a trading holiday and I yet have to see a holiday in the past two years that wasn’t preceded by some damn ramp up.

Alright, you have been briefed. Deal with it on your end. If you decide to hang short don’t chicken out when it’s too late. And if we drop like a rock next week please don’t bitch at me that you’ve missed out on a big move because of me. This is obviously not a market prediction. This post is to warn you about what’s coming. Even if it doesn’t come today or next week it will come – you will see your premiums get cut in half at some point in this primary wave. Bank on that.

Meditate on this for a while and then come back and let me know if you want to be a stainless steel rat.