No Lift No Gift! 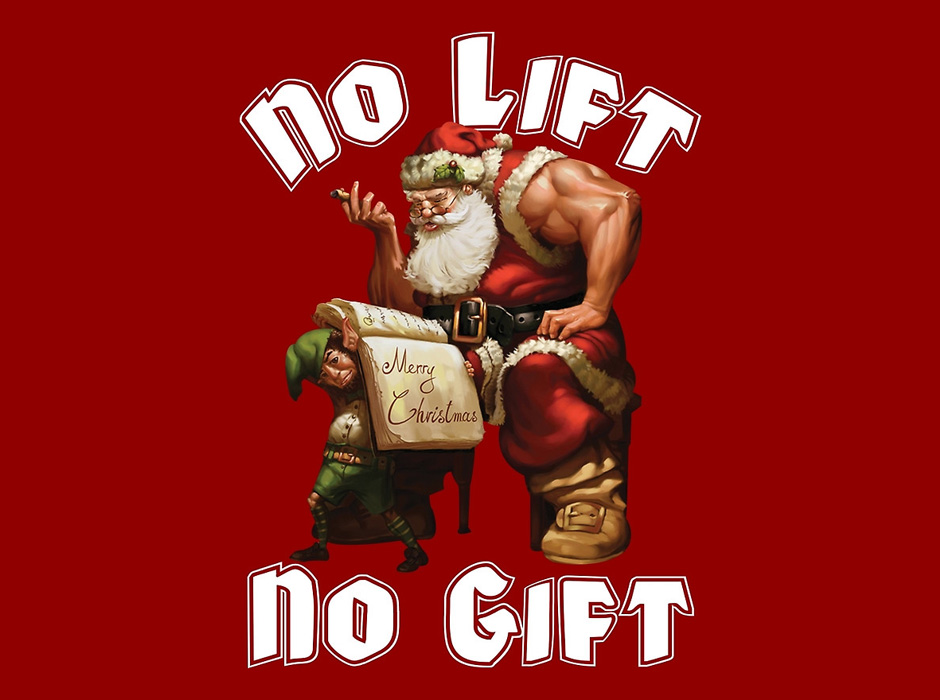 Yesterday was my first day back at the gym and managed to snap right back into my full routine in stark contrast of me barely being able to walk upright just last Sunday. As the saying goes: No Pain – No Gain, or in Yuletide terms: No Lift No Gift! Which pretty much has been my motto for most of this year as I’ve been working my ass off 10 hours plus seven days a week on the quant system front, all of which is slowly starting to pay off now. More on that to follow over the coming weeks after alpha testing has completed.

This will be my last pre-market post of the year as I, like most of you probably, am taking the final week of the year off. I will however post an update on our statistical stock trading system on the 24th as well as the 31st, so if you’re around make sure you’ll drop by for a few minutes. My first regular pre-market post will be on Monday, January 2nd. As always the Zero indicator and all systems will continue to run unabated and if you run into any problems just email me at admin@. 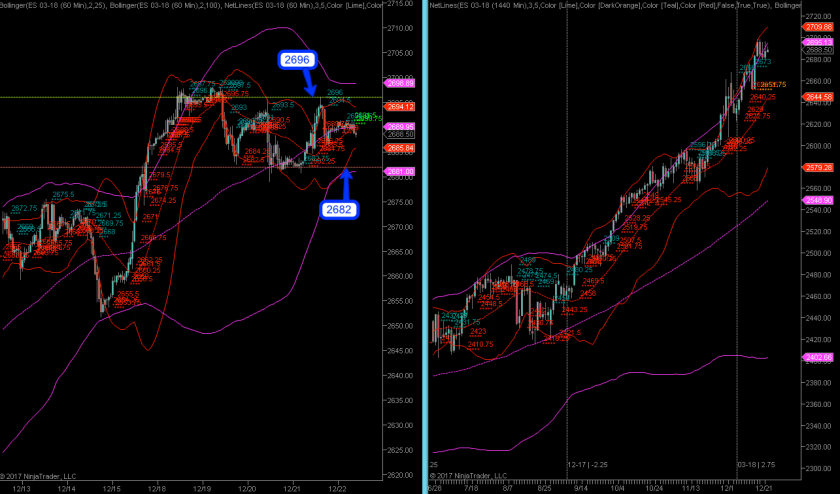 Alright, to wrap up the year in style I thought I’d run you through a few key markets and offer a few perspectives on where they may be heading next. Obviously equities have had another record breaking year which even managed to thwart the previous two phases of this ongoing bull market.

Frankly there is no telling how high it’ll go before it finally runs out of steam (and buyers) and if we are all honest anyone with an opinion who claimed to know the future since the 2008 lows has been run over by a steam roller. We are without doubt experiencing a once-in-a-lifetime bull market in equities, which is now only outdone by crypto currencies. When she’ll be ready for a meaningful correction I’m confident we’ll be there to reap the financial benefits, because that’s what we do here at Evil Speculator. 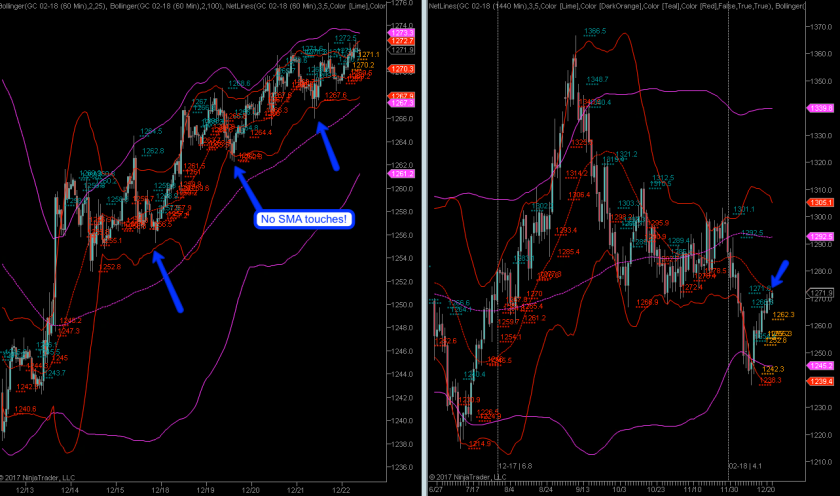 On a short term basis gold is looking bullish as heck and hasn’t even bothered to visit its 100-hour SMA over the past week or so. It’s now approaching its 25-day SMA where I’m sure it’ll take a moment to catch its breath. 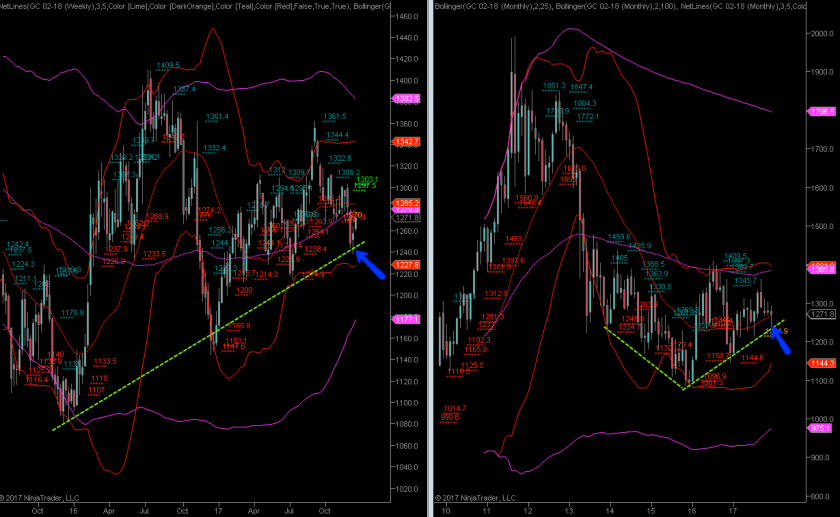 Long term we are looking at a possible floor pattern, especially on the monthly panel. However until  1409.5 is breached the bears may still come back to haunt the gold bugs. 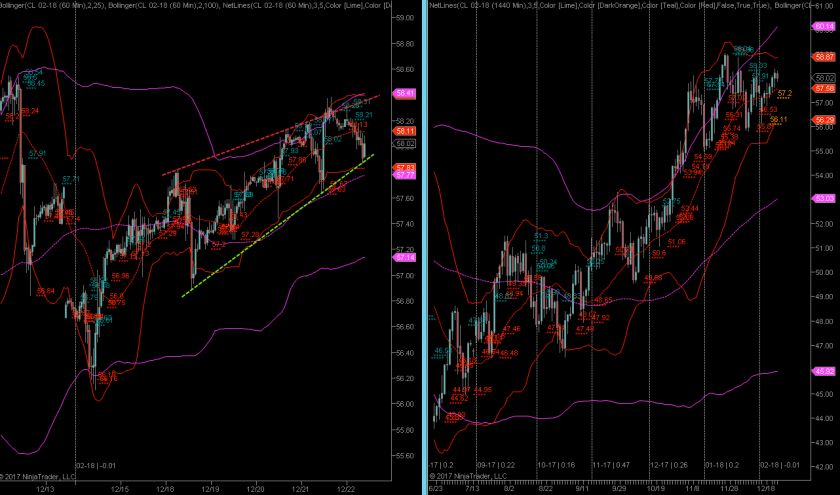 Crude is also progressing nicely and I am watching the unfolding rising wedge pattern on the ST panel with great interest. I am not involved here but would consider a long position on a small correction lower. 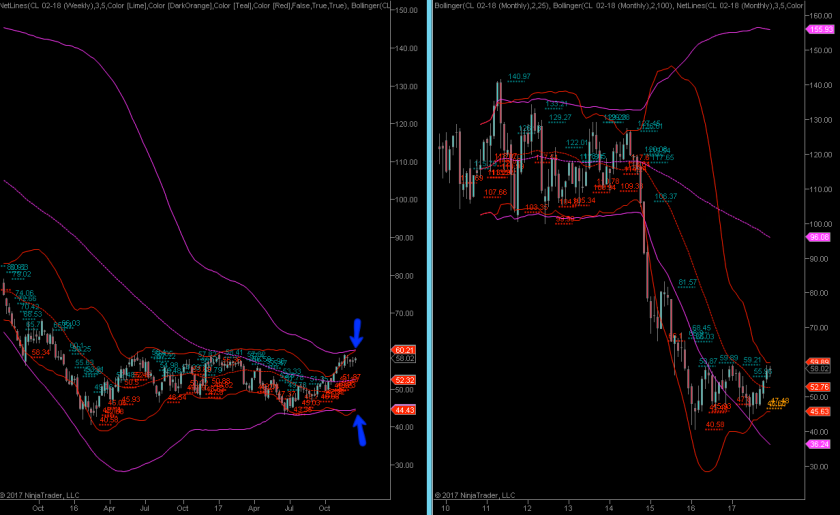 The long term picture in crude should be absolutely mind bogglingly compelling for any trend trader. The weekly Bollinger is just now entering expansion mode after a massive pinch which promises to bestow us with quite a bit of movement over the coming year(s). I think it’s going to be to the long side, assuming crude is able to make it above its 60 mark. Which is a situation that would be highly appreciated in places like Saudi Arabia which allegedly does not break/even below a crude price of $70, which in turn has caused massive unrest and political reshuffling in the recent past. 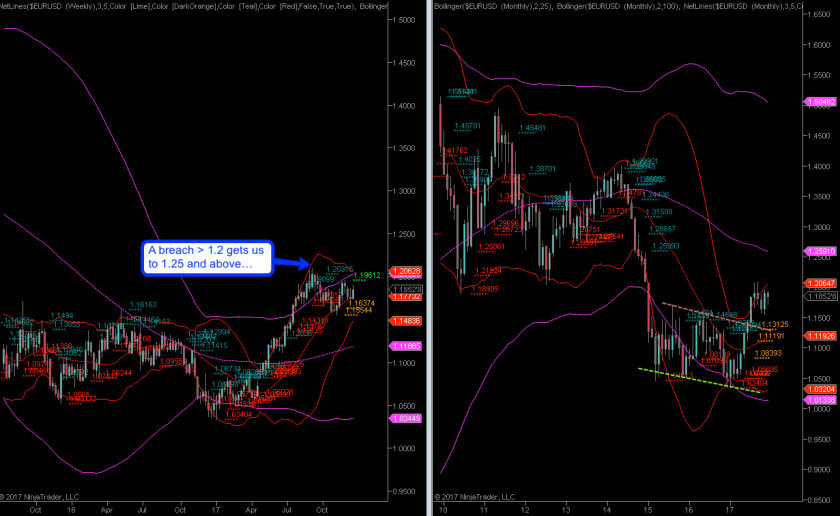 The EUR/USD unfortunately continues to shake off any political turmoil which isn’t really surprising as forex markets usually do the opposite of what economists think would make logical sense. For the Mole that probably means at least a 20% increase in living expense as I easily see the EUR/USD at 1.25 and even above, assuming of course it is able to breach > its current 1.20 inflection point. 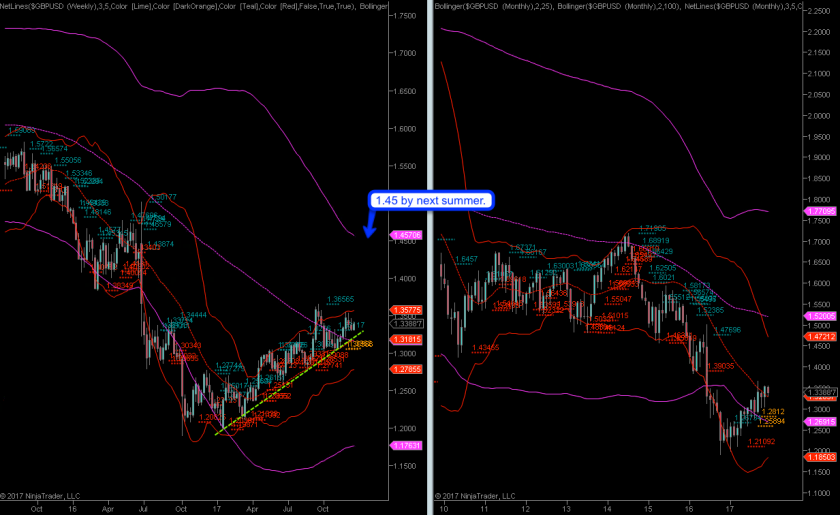 Cable is on the move ladies and leeches, which I personally enjoy seeing as it probably pisses off all those unelected Eurocrats in Brussels. I think 1.45 is a possibility if it can push > 1.35 and hold it until early spring. 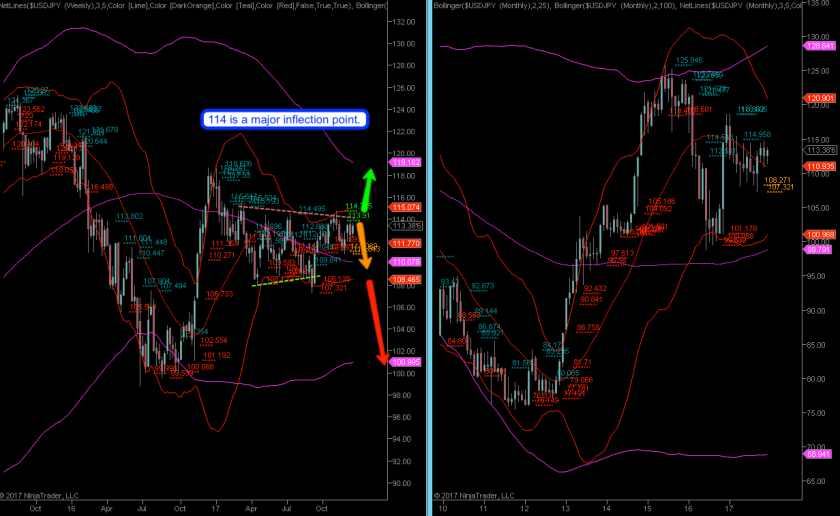 The situation in the Yen is less clear to me. The weekly formation gives both the bulls and bears equal odds but the upside is that it seems to be a pretty binary situation directed by its 114 inflection point. A push > and successful retest means a weaker Yen (and a higher USD/JPY). A drop from here drops us back to the lower supporting diagonal or worse. 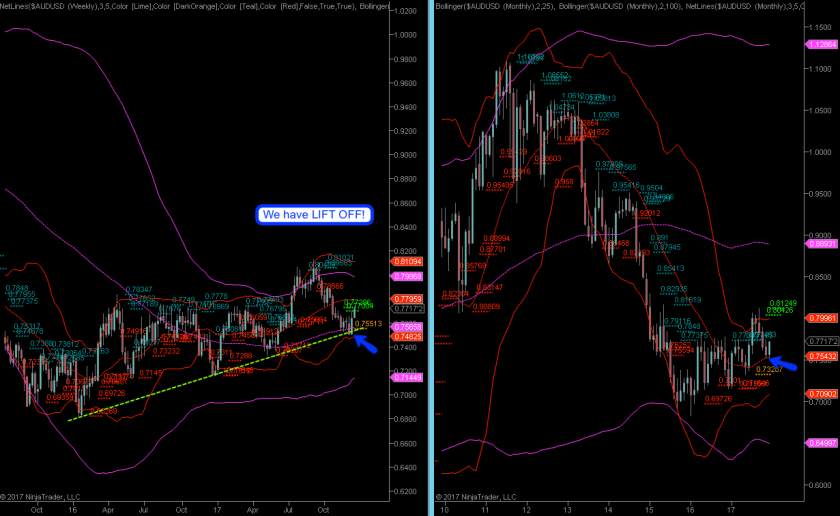 I’m very happy to report that the Ozzie Dollar appears to be getting out of the gate. I posted this chart to my intrepid subs various times over in recent past in anticipation for just that event. 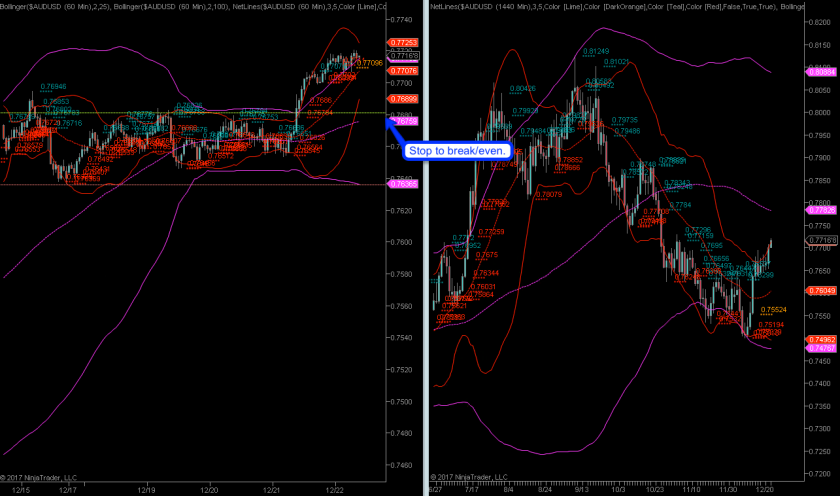 Which is why I am particularly proud that we managed to grab a long entry yesterday and our stop now goes to break/even. If you missed out on this one you only have yourself to blame as I told you many times to become a full fledged member. DO IT NOW WHILE SUBSCRIPTION FEES ARE STILL LOW! 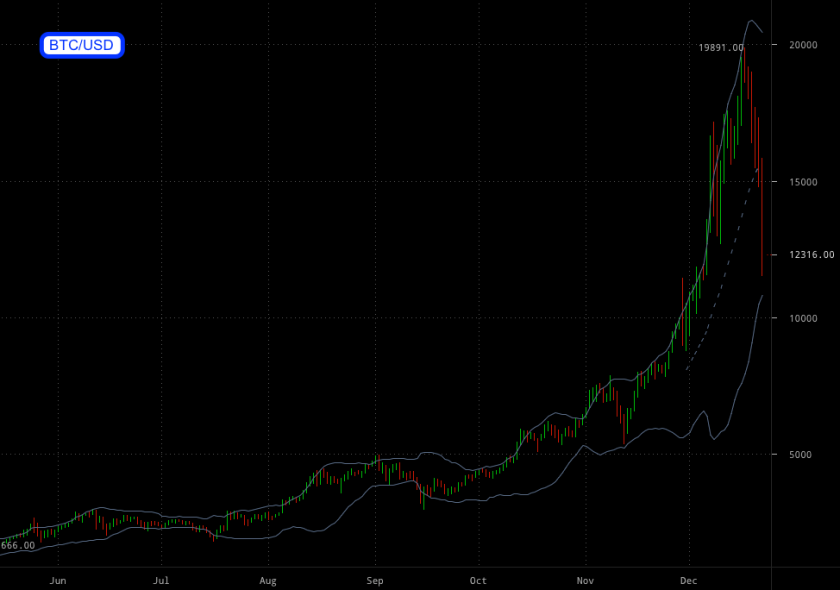 Last but not least the new bad boy of currencies – Bitcoin. Do I even have to rub it in again? Human nature is just too predictable I am afraid. Frankly I’m done posting about cognitive biases and trading psychology as it only serves to drive away 99% of traffic and in the end I would end up talking to myself. Otherwise let’s just say that new Cboe and CME futures couldn’t have come at a better time. And given that crypto exchanges are reporting on average 100,000 new accounts per day I’m sure this will be the gift that keeps on giving for a long time to come.

This is me wishing all my stainless steel rats a very merry Christmas. As mentioned above I’ll briefly check in on the 24th and the 31st to keep the stock portfolio stats going. Otherwise I’m looking forward to a well deserved week of rest and reflection. Heck, perhaps even my damn hands may get a chance to heal! 😉