I have movers all over the house as we speak and they are about to carry out the desk I’m working on right now. So forgive me if I’m not as elaborate as usual. I was about to simply run you guys through a few juicy commodity setups, all of which by the way seem to have come into sync, thus greatly improving our odds. But there is one chart I ran into this morning which paints a unique picture of what has been going on in the past few months. As I won’t be able to post this weekend I decided to be a kind Mole for a change and just throw it to the leeches: 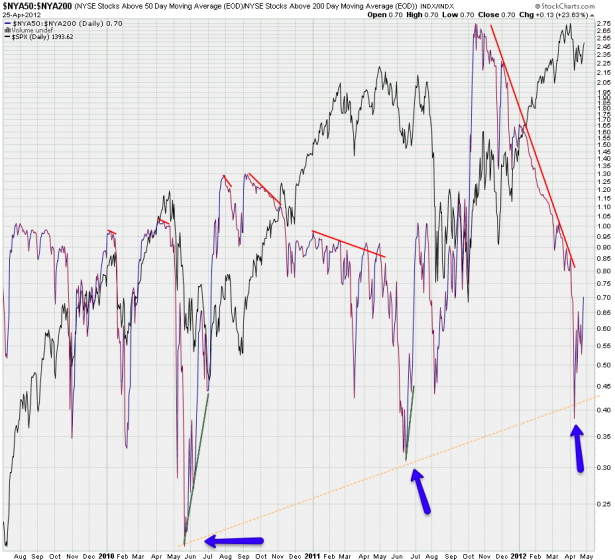 I think some of you may remember this one – it’s a ratio of all NYSE stocks trading above their 50-day SMA vs. all trading above their 200-day SMA. In essence this measures the quality of an advance and on the inverse if there are signs of recovery on the way down. As you can see we experienced various bearish divergences ahead of meaningful market corrections. You usually see the ratio flatten near market tops and then follow the tape down as part of a sell off. It’s not too unusual to see a bullish divergence on the bottom as well, which is usually an early harbinger of a looming reversal.

Clearly we’ve been plotting a bullish divergence for the past month now and it’s now painting a pretty pronounced pattern. But this is not what I want to talk about. What really captivated me about this chart are two things: One is the magnitude of the bearish divergence we got before we actually corrected downward by – what – a measly 60 SPX handles? Two there is now a technically valid (i.e. 3 touches) diagonal long term support line and this tells us another story. The market was as vulnerable as they come in the past few months with only APPL and a few other prime symbols carrying the cash indexes. And as we are now bouncing back the bears have (yet again) lost a crucial battle and I fear there will be a price to be paid. Well, I’m not really worried about it either way as I don’t take sides. When it comes to playing the tape I’m a promiscuous little Vegas whore playing tricks on whoever is silly enough to take the other side of my trades.

And as it happens this long term chart seems to sync very well with our more short term trading perspectives. Let’s take a quick look – I would love to invite you to my evil lair but it is no more. In the coming weeks I will be reporting from yet undisclosed locations in Spain: 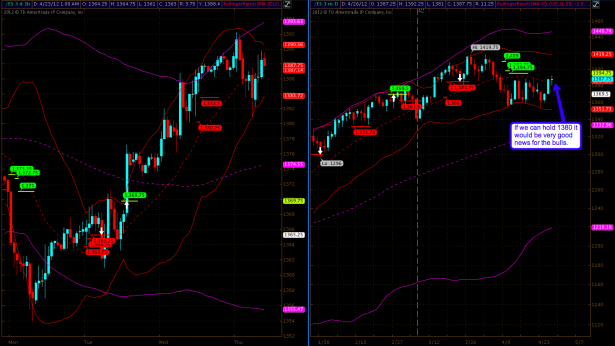 The spoos managed to finally push above the 25-day SMA. You don’t have to be an experienced charting pro to realize that this is a big deal and may lead to a bounce higher. However I don’t expect this to be a cake walk – let me show you why: 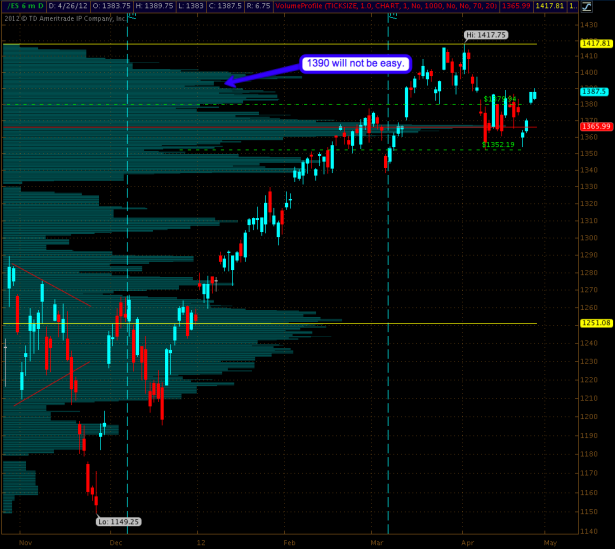 We’ve got another small volume hole at 1390 – not something to be really worried about if you have mojo to move the market. Rather an opportunity to shake out a few weak hands joining the fray on the way up. 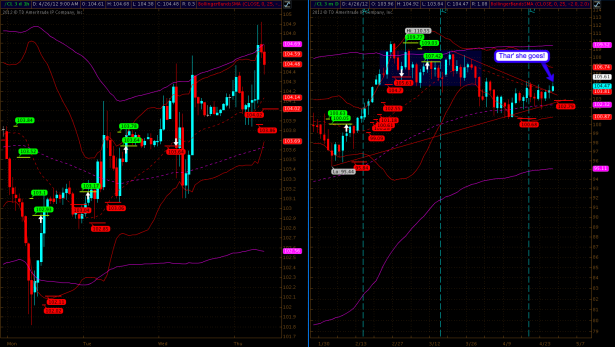 Crude is on its way! Another breach which has me all giddy. I do of course always expect a little retest and if you missed it you may get your second chance. 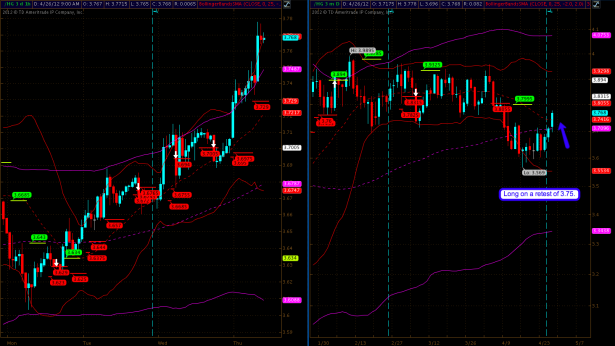 Copper also on the run. Obviously this was a tough trade to catch and you can also look out for a retest here. 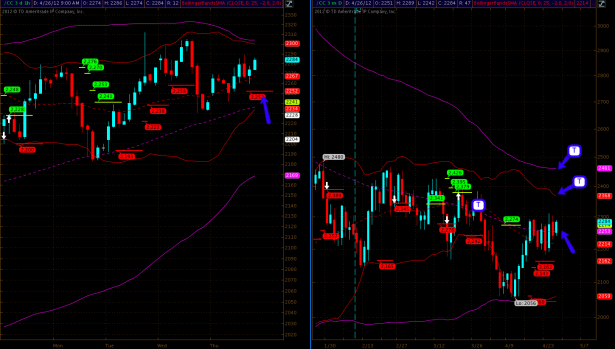 Cocoa may just finally decide to pick a direction. Frankly I’m not really hot about this trade but my emotions are usually wrong and thus I’ll take it with a tight stop. 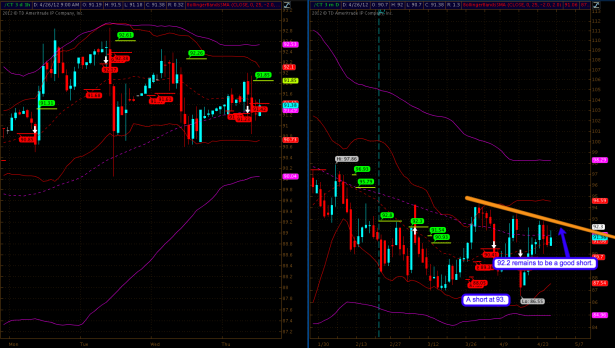 Cotton – not exactly a setup right this minute but I wanted to put it on your map. 92.3 is where that diagonal continues to build a wall. Either way a great setup whenever we get close so set your clocks. 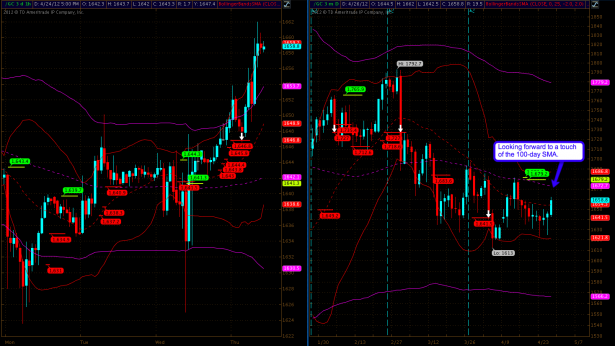 Similar story on gold – I’m not in this right now but want to be as soon as we get near that 100-day SMA again.

Before I go let me congratulate everyone who took that Nat Gas entry yesterday: 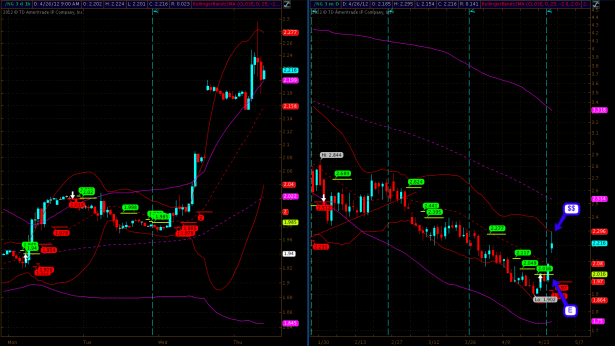 Of course I do hope you got out as we approached that upper 25-day BB. Not a good idea to get greedy after a candle like that.

This will be my last post for this week as I’m moving my entire operation overseas. But no worries – Volar is on the case and promised to put up something on SKEW and volatility over the weekend. My next post will be either Monday or Tuesday, henceforth reporting from beautiful (but currently rainy) Spain.