Today was a pretty rough session – if you look at the chart it looks pretty clear in hindsight but the tape is changing and thus we need to also alter our outlook on how to use the signal in our trading. 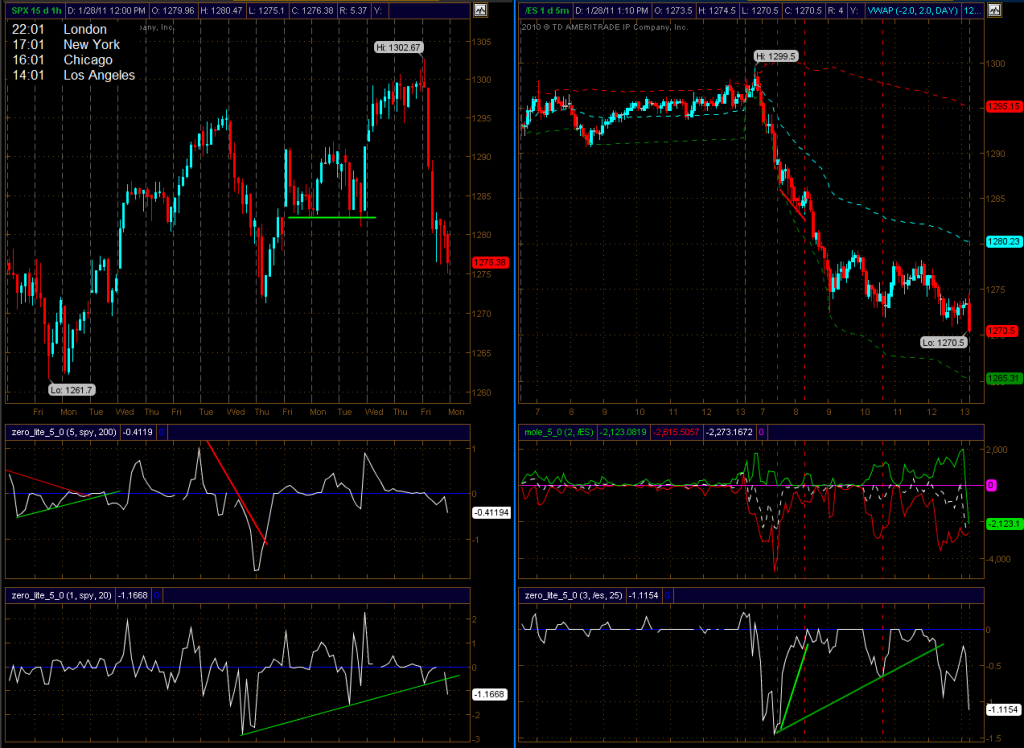 The Zero dropped like a rock right after the open and the spoos right with it. As you can see prices started to pull away from VWAP (i.e. expanding their distance) which is usually a pretty bad sign and points towards a down trending day.

Two hours into the session I pointed out a divergence on the Zero Lite – see the light green support line I drew on the chart. In the past two years a setup like this has resolved over 80% of the time but today we weren’t that lucky and my stop placed at 1283 was touched at 11:30am EST. From then on we started to zigzag lower and completed the day at a the daily low.

Now, sometimes the most valuable lessons are learned in defeat and this is one of those occasions. What did we learn today? First up I can assure you that the buy bots got crushed today – I know this as Geronimo stroke out twice today as well (more about that below). I wound up putting a comment on the chart which stated that it felt like the HFT bots had switched into reverse. As I do not even read news during the trading session it’s clear that I refuse to chalk this day off to anything that may have happened in Egypt. That’s complete horsewash and has nothing to do with what happened today.

Rather this felt like big players taking profits and handing the bag to retail pigs dumb enough to chase the tape up (which btw, I cautioned you guys last week to not chase this thing higher). Look, the spoos never even as much as touched VWAP today, and that in itself means that any efforts to buy the tape higher were either squashed or were in fact nonexistent.

So, what happens next is of course what’s really interesting- forget about today. A day like this cannot be predicted and once it happens the follow through is what is on top of my mind. Because a trend change if often reflected by the type of follow through it evokes. If we see the spoos hold their ground and even gap higher tomorrow then we know that this was nothing but a shake out – otherwise something more substantial may be in the works.

For us Zero traders this day means that we need to be more cautious when it comes to trading bullish divergences. And by cautious I mean is to wait that extra bit longer before taking a long trade and to also wait for a more solid bottoming pattern. When I went long right at the second red-dashed vertical line prices had not produced a convincing bottoming pattern and although this risk was acceptable while the tape was melting up it lead to my stop being touched today. Of course I didn’t incur a big loss – I lost eight ticks – but it should have been avoided as the distance to VWAP had not diminished yet and prices had not produced sufficient evidence that even a temporary low was in place.

Geronimo did not fare very well today – two trades were taken and almost immediately stopped out. Not much coin lost thanks to the 12 tick stop loss but frustrating nevertheless. I spoke to Scott after the close who actually has an idea on how we may prevent Geronimo from taking trades on down trending days. Will look at that over the weekend and once it’s implemented I will test the heck out of it. As I’m also working on ZeroFX (which is a very tough nut to crack btw) it seems that I won’t get much of a break.

All in all an exhausting day for me and it’s time for me to crack open a cold one – have a great weekend, everyone!