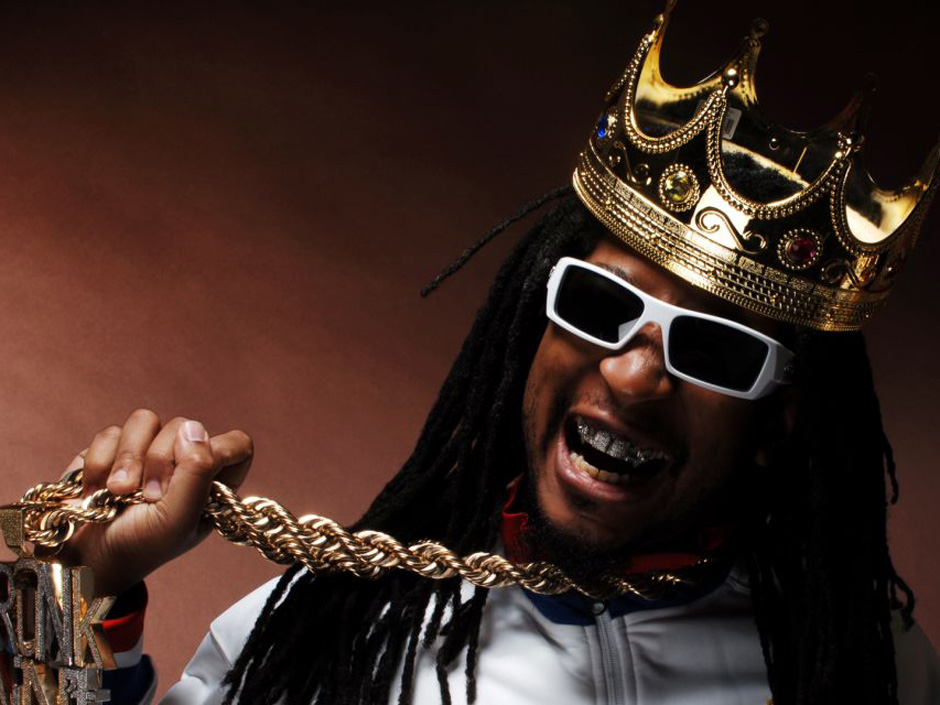 Interesting how both the ECB and Fed minutes over the past 24 hours made references to the U.S. ‘trade war’, and I should point out that at least for the ECB increasing worries are more than justified. The U.S. economy is now growing at an annual rate of 4% plus and heck – we’re just getting warmed up. Meanwhile Heiko Maas, Germany’s foreign minister, has gone on record demanding an alternative to the U.S. dominated SWIFT system (which is actually headquartered near Brussels, but alas).

So effectively Germany has just declared war on the U.S. Dollar hegemony – and for what exactly? Apparently in order to save a nuclear deal with – yes you guessed it, Iran. Yes, Iran – the one country everyone but the evil U.S. wants to finally see wield nuclear weapons. And it doesn’t end there. Check out the English edition of the german Handelsblatt which yesterday posted Heiko’s ambitious new plans for a ‘new world order‘.

WHAT? Sure, that worked out so great last time, Heiko! Alright, it’s official – the Krauts have gone completely bonkers again. And quite frankly I am very much looking forward to watching them reap the fruit of their desperate schemes, which are squarely aimed at distracting hapless Euro voters from the mess they’ve created for the entire continent over the past decade or two.

And once again I must congratulate myself for abandoning the dismal and crunk deprived soil of Germany in the early 1990s and eventually becoming a proud American citizen (yes, the legal way). Worth. Every. Damn. Penny. First and second amendments, bitches! 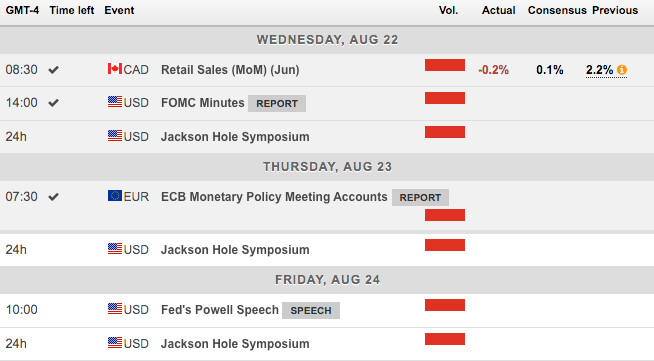 Alright, we’ve got work to do. The event calendar shows Jerome ‘Kryptonite’ Powell on the roaster for tomorrow and odds have it he’s once again going to say something that’s drops equities by a quarter percent or so. Plus we’ve got Jackson Hole news up the wazoo, so keep your stops sueltos amigos. 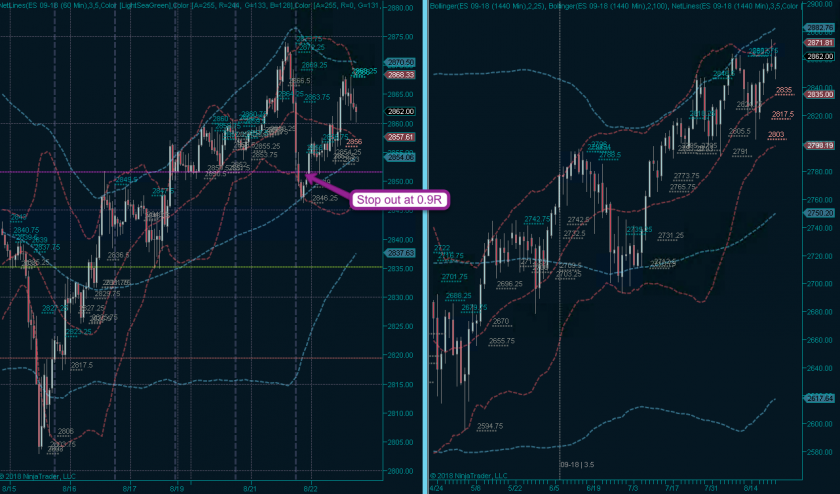 Which is why I’m not too broken up about getting stopped out Tuesday night. Most likely we’ll get another entry opportunity today or tomorrow. 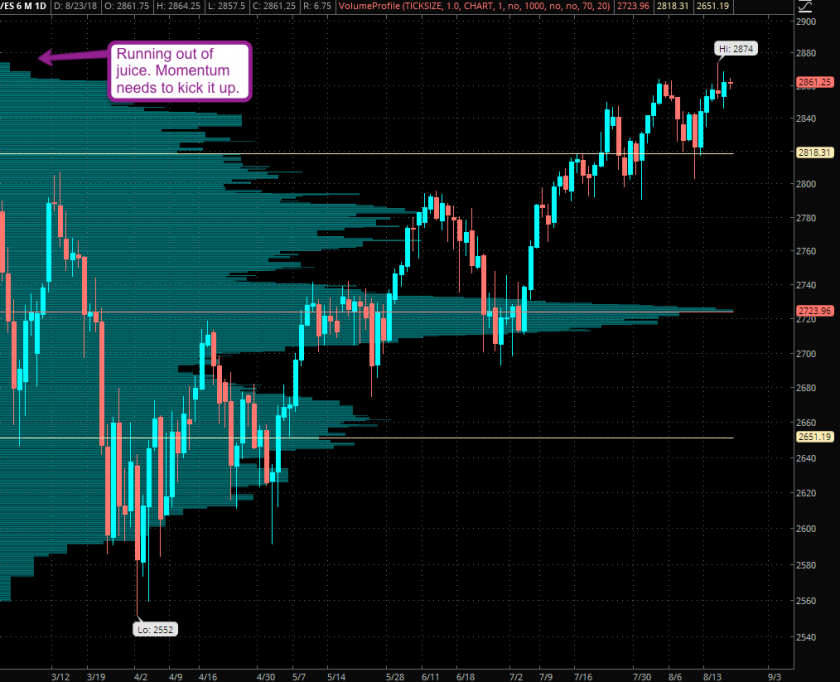 Here’s where we’re at on our volume profile chart – at the edge of the world that is. Either some big news event pushes us into uncharted territory and hopefully new all time highs, or we’re probably going to keep whipsawing around until the end of summer. Oh joy…

Although yesterday ended up green on the futures DVOL actually exceeded UVOL, which does not bode well for a break out rally here. 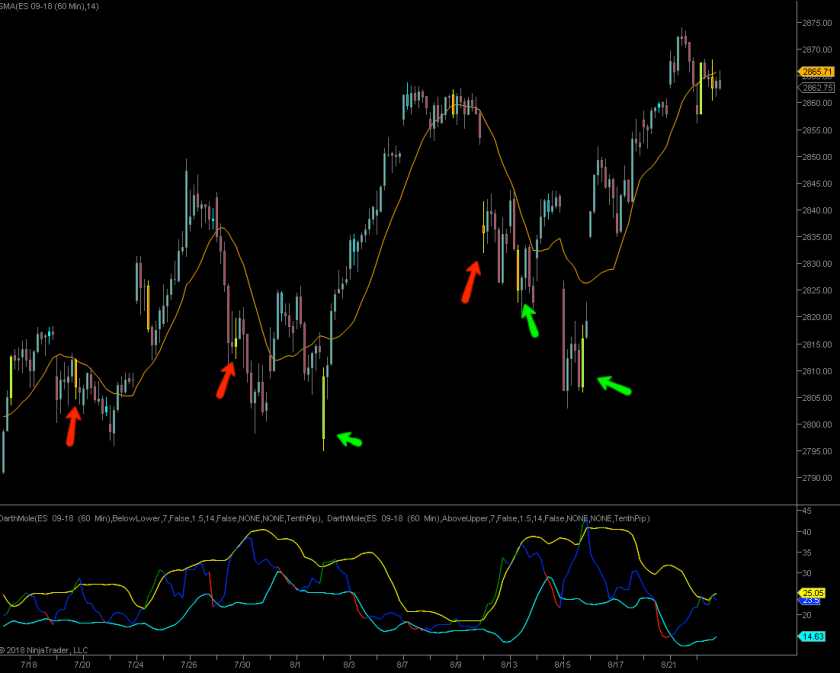 My realized volatility (RV) chart shows it double signaling a potential low but those signals are 50/50 and the edge here is based on break out rallies. As you know my new long rule here is a long position on a yellow candle as long as it’s < its SMA. But I may actually switch to a Bollinger band here as the money shots seem to happen on larger deviations from the random walk’s mean. 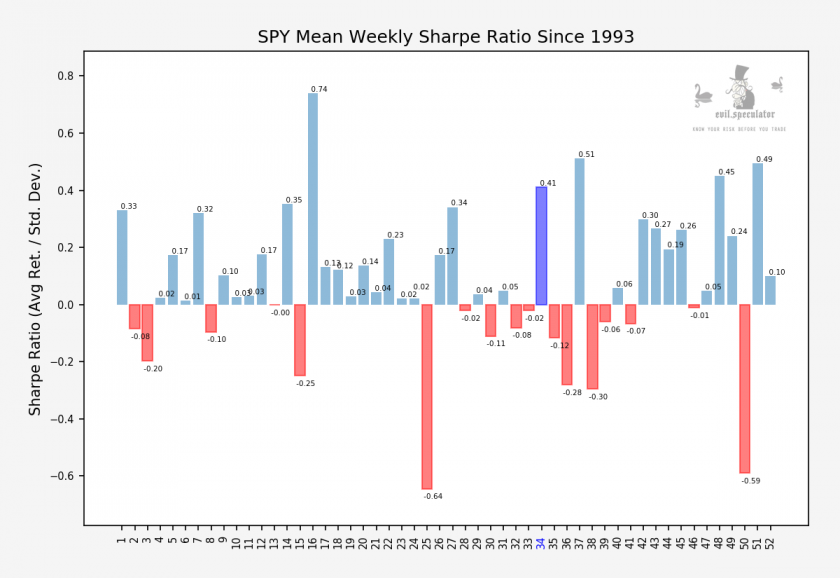 This week is actually the fourth best one for equities historically speaking and before we get to the second best (week #37) we’ve got two statistical down weeks to content with. It’s not chiseled in stone but just so you know where we are in terms of seasonality. 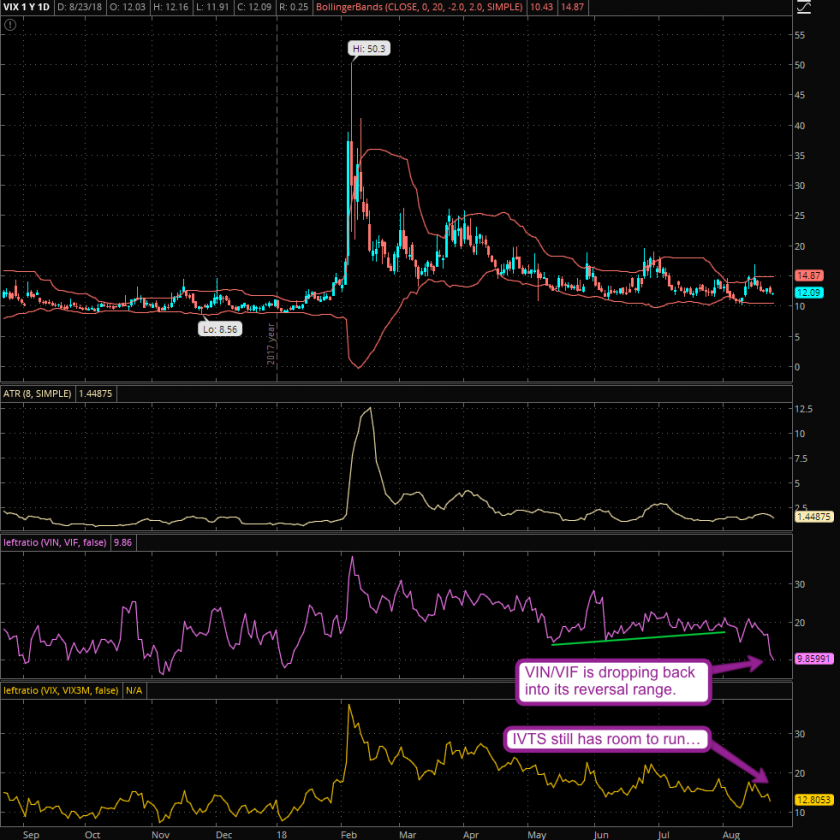 The VIX is scraping around its SMA(20) but I’ve got my eye on the VIN/VIF ratio that’s been dropping pretty hard over the past week. IVTS (VIX/VXV) is also dropping but still has room to run. Usually bad things happen when both start pushing < 10 (relative to the VIX – it’s a left ratio). 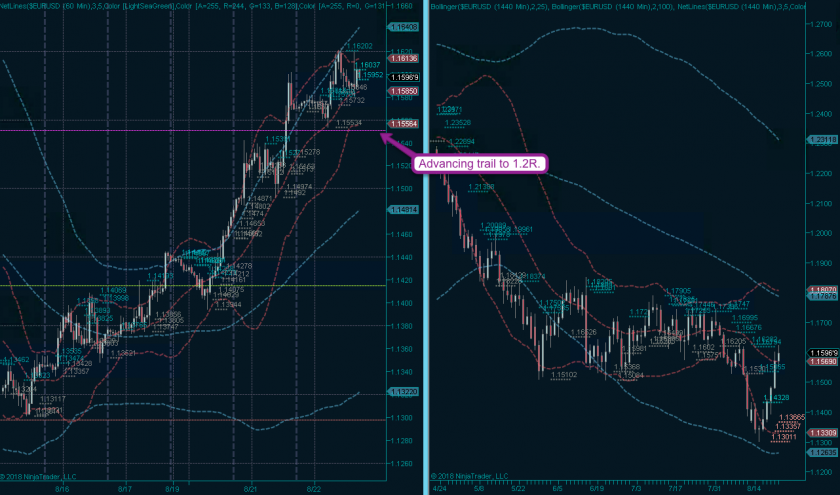 Quick campaign update on the EUR/USD: Looking good Billy Ray – and feeling good while advancing my trail to about 1.2R. And yes I hate it as life is getting more expensive for me over in Europe. Time to finally come back home? Julie wants me to move to Montana or Oregon. I’m more partial to the latter as it supposedly gets over 300 days of sunshine per year.

Alright, we’ve got setups and entries folks. Please meet me in my lair: