I had to write myself a little fix for my NYSE breadth chart as at least the D/A panel promised to remain pretty much unusable after last Friday’s signal spike. Let me show you what I’m talking about:

There you have it – a major outlier which completely flattens everything preceding it. As 50+ signals are obviously a rare exception I resorted to truncating any spikes after 22 and painting the real value above, as such: 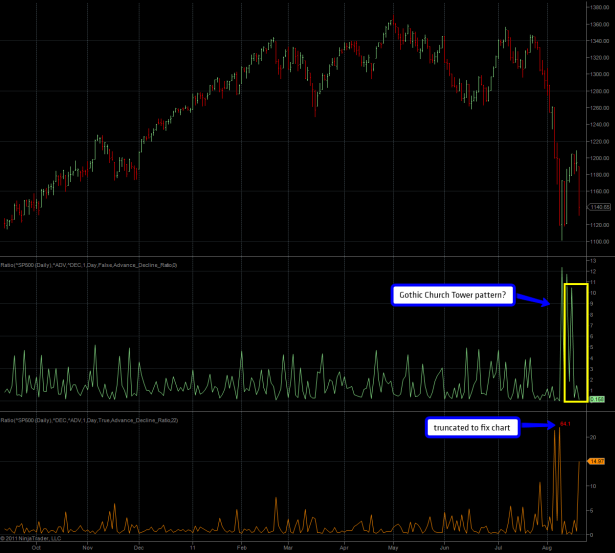 So much better, isn’t it? Now we have a functioning breadth chart again – I think that’s a rather simple but elegant solution. Anyway, the real reason for this after market post is the A/D panel which first painted a divergent signal and now what appears to be Gothic Church Tower fractal pattern.

Well, we used that one quite effectively back in the day, more specifically before the onset of Bernanke’s two rounds of quantitative easing, which rendered it pretty useless, plus we did not see many occurrences. And yes, it’s a bearish signal which if the tape had stayed put today would mean that a sell off was looming. Now that it has already happened I’m less excited about it and I’m not going to jump to conclusions and suggest that the current drop must continue. But it’s worth noting and I want to put it on the map for everyone.

P.S.: Seems disqus is broken (again) – I already filed a support request. Let’s hope those guys get around fixing it in the near future.