And There You Have It

I rarely resort to quoting myself but my post to the subs on Tuesday chimes well with today’s tape:

And there you have it – Mole is skeptical about the upside long term and skeptical about the downside short term. Obviously I am hoping for higher prices so that we can back up the truck. But guess what – so are a legion of other traders out there as the long term writing is clearly on the wall now. Which means we must not get married to our favorite scenario and then miss the bus altogether – after all, it moves the fastest when it’s empty. I do not have too much short term evidence at the current time but there is always a possibility that this rally may have met its maker. That possibility will turn reality if we start taking out important support lines.

And just so to spell it out (we do have a lot of new subscribers) – a breach of today’s highs tomorrow or the day after would most likely produce a push toward the 50% retracement mark on the SPX, or even higher. Yes, it’s our favorite scenario and that in itself is a dangerous psychological trap we need to avoid. As we have satisfied a respectable retracement of 38.2% we now need to watch the tape like eagles and carefully adjust our odds based on what price is telling us. We are currently at the first inflection point I presented last week and we need a breach of today’s highs very soon as to prove to us that the longs have the mojo to get this beast up toward 1220.

Well, that breach never happened and Wednesday’s session was a bit of a train wreck, which in itself had no meaning as markets appeared to be in a holding pattern. Today’s cliff diver however, as brutal as it may be, provides us with important insights and additional context for assessing the current trend. Let us take it from the top: 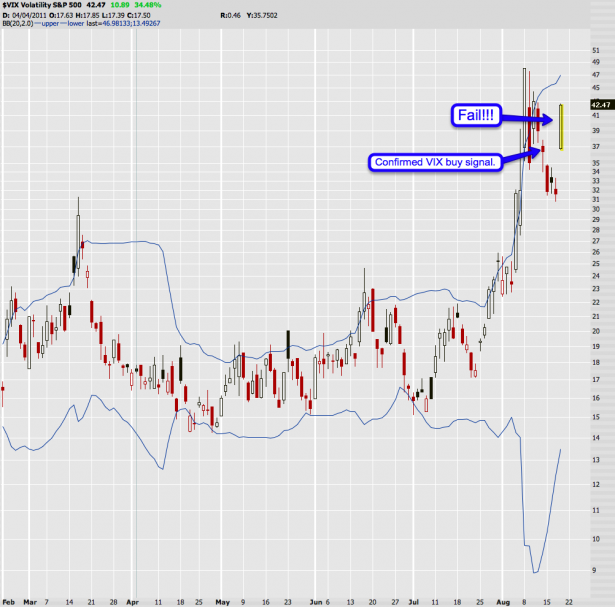 Last Friday we received a bonafide VIX buy signal (noobs: the buy refers to equities, not the VIX), which gave the longs much hope for a meaningful retracement.

Now, I may be off my rocker but unless a miracle happens today or tomorrow I consider a 34% rise in volatility a failed signal. Which is something I also touched on last week – I suggested that should this VIX buy signal fail it would provide us with yet additional evidence that the trend has changed to the downside.

So on a short term basis today’s down candle is a bit of a party pooper. Yes, many of us (Mole included) was looking forward to an opportunity to back up the truck near SPX 1220 or higher. Didn’t happen, or at least it has not happened yet. But on a long term basis today’s candle is extremely important as it provides us with yet another piece of evidence. Which means we must shift our focus away from trading the swings and increasingly toward playing the big moves, just like we did back in 2008. You can’t trade bear markets like bull markets – it’s a completely different ball game. Down moves are sudden and apparently come out of nowhere, investors suddenly respond to the same bad news that were ‘shrugged off’ during the up trend, reversals are equally violent and it’s easy to get scared out of your short positions.

The only way to successfully navigate the trials and tribulations of an emerging bear market is to think medium to long term and to fade the news, the drama, the counter spikes, and most importantly – your emotions.

Now, let’s look at our maps to get a feel of where we’re heading and what our options are at this point from a trading pespective:
[amprotect=nonmember] Charts and commentary below for anyone donning a secret decoder ring. If you are interested in becoming a Gold member then don’t waste time and sign up here. And if you are a Zero subscriber it includes access to all Gold posts, so you actually get double the bang for your buck.
[/amprotect] [amprotect=1,13,9,12,5] 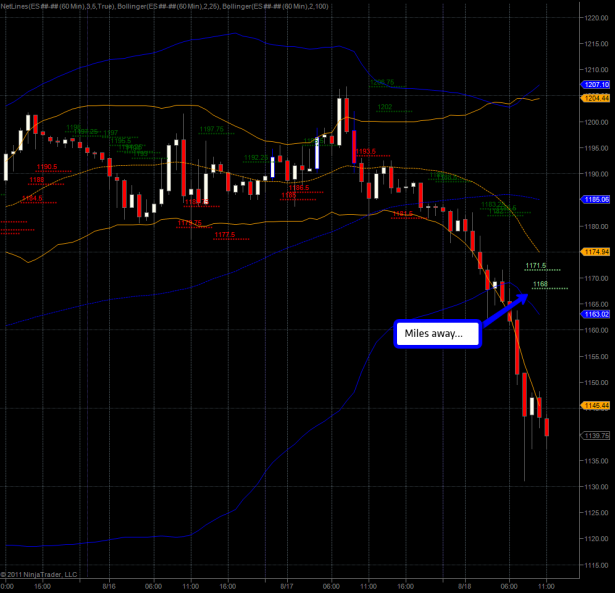 Short term spoos – that hourly buy net-line is miles away at this point and the odds for taking a long trade are pretty slim here. Despite that spike outside both Bollingers I frankly don’t see any edge on the buy side yet – so wait for evidence (which I’ll post when I see it). 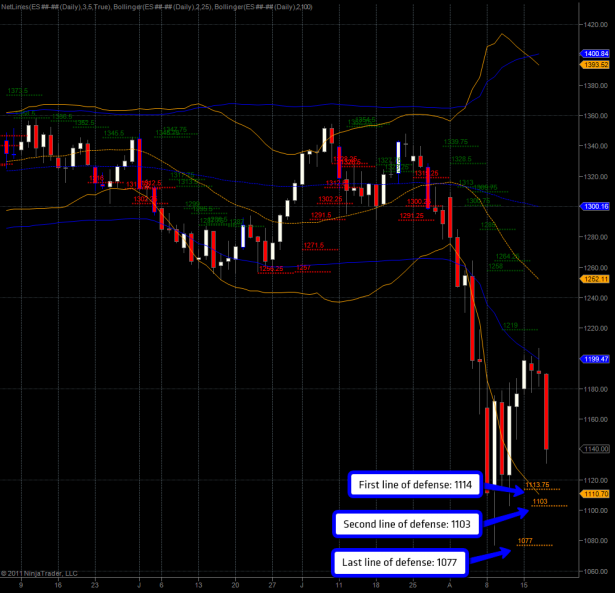 The daily chart offers us a bit more context – please note three lines of defense I pointed out above. In order to give the longs as much as a prayer we should frankly not even get near ES 1114 – and if we do we better see a violent snap back that drives us toward 1150 and higher. If we don’t it means we go lower and each additional breach confirms more downside.

Now the tricky part is whether or not the current move down is a completion of (dare I say it?) a motive, or the beginning of a new one. That’s a tough call and another reason why EWT is rather useless in projecting target zones – in most cases your counts are plenty and most of them are wrong (especially if your name is cough-Hochberg-cough). 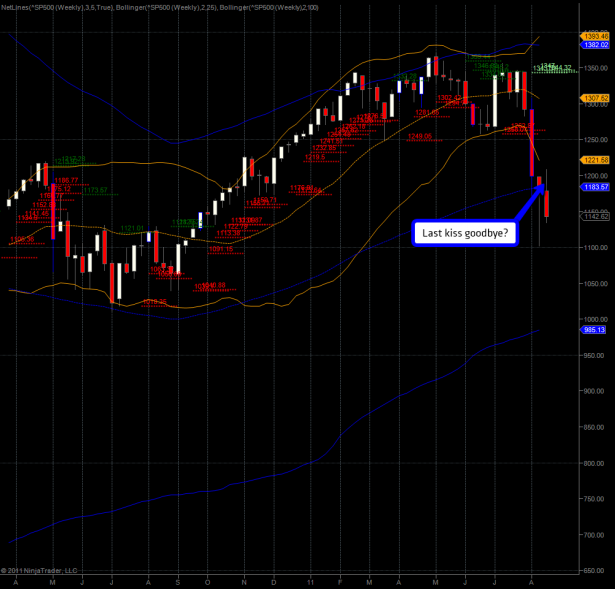 These days I rather look at price and the weekly SPX chart paints an ominous picture. The longs had a real good chance of seeing the 1300 mark again but somehow never made it out of the gate. We pushed near the lower border of the 25-week BB and now dropped back below the 100-week SMA. That’s really bearish and if it turns out to be a bear trap it should find a floor rather quickly as it represents huge downside risk. Unless we close above 1200 before the end of the week this is starting to look like a last kiss goodbye and suggests a visit of the 1000 mark. 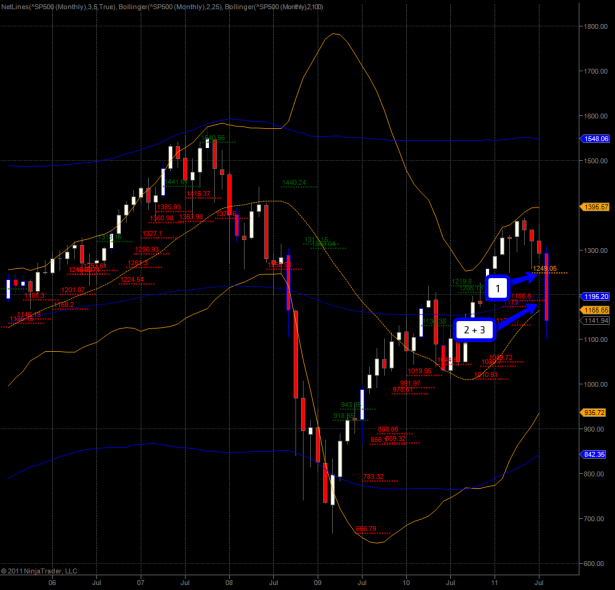 The monthly chart gave us a sell signal early August and the longs needed a close above 1250 to pull the cart out of the mud before the 31st. Instead we are now trading again below both the 25-month and 100-month SMA, not a place where happy things happen to permabulls.

The monthly suggests we are in for a visit of SPX 940, and most likely SPX 850. So, if you’re all bummed out about missing out on today’s (thus far) 50 handle drop then try another 300 for good measure 😉

Obviously today’s move is not one any of us want to chase. Which leaves us with two options:

I’m currently a bit undecided and require more confirmation on the momentum/sentiment side. NYSE D/A is currently painting a 17+, which is a far cry from last Friday but still very very respectable and clearly bearish. However, copper is not confirming yet – and you may recall that I want to see a close below the 1.9 mark. Also, both Volar’s and my sentiment measures strongly suggest a trend change but with an expectation of more upside until early September. So, it’s still a bit early in the game.

Given the current mix I am going to hold off for now and rather wait for confirmation – especially given the explosion in volatility today, which makes buying premium a very costly endeavor. I rather miss out on a move than being forced into a potentially regrettable trade, which is one of the prime directives I have arrived at over the years..

Finally, if you went massively long term short at the breach of that inside candle then I suggest you do absolutely nothing. You got a good entry and now it’s time to sit back and let the tape sort itself out.