Over the past two months we have been navigating some pretty volatile tape which in the process offered us several swing trading opportunities. As a result I have been pretty pleased with myself after serving up consecutive profitable entries near medium term inflection points. However upon a bit of meditation earlier today I realized that my own ego may be getting the better of me. For one it is very tempting to engage in calling turning points after successfully having done so in the recent past. That little psychological trap probably lies somewhere in the realms of illusion of control bias which is to believe that one can foresee or even influence future outcomes that one has no control over. 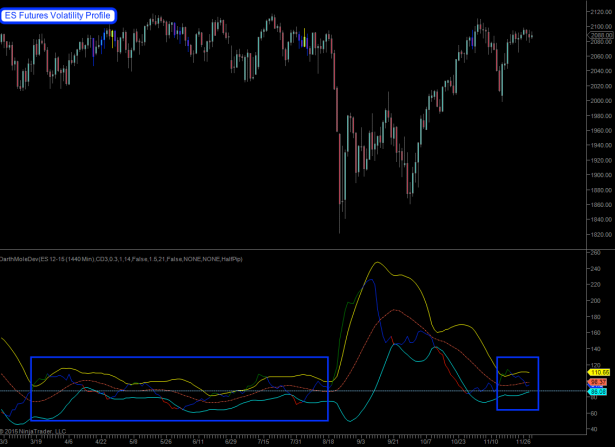 The second cognitive bias we may all be chronically suffer from is recency bias, which is the tendency to weigh recent data or experience more than previous data or experience. One aspect of recency bias that mostly remains ignored is that of volatility cycles and market periods. I’m sure you all remember the dreadful sideways tape we had to endure most of this year until mid August. When it finally resolved volatility literally exploded and over the past few weeks we have enjoyed the corrective trending period that ensued after a volatile sell-off and a sideways high volatility consolidation.

However, if you look at the chart above you will realize that the current volatility range is again starting to resemble the type of tape we suffered through all the way into late summer. Given the recent low volatility trending action it is easy to expect more of the same but I should caution everyone from jumping to conclusions. Clearly we are heading into what is statistically a bullish trending period. However, even if we climb to new highs and paint the yearly candle green it is possible that we are once again facing more sideways churn in the initial months of January. The take away point here should be that a) momentum is slowing down and b) that market conditions for most of the year have produced an equilibrium between buyers and sellers. Clearly we are at the tail-end of a seven year bull market and need to keep in mind that LT charts move like glaciers. Which means possibly more sideways churn and consolidation before equities are ready to produce a meaningful correction.

In the past nine sessions we have been stuck in the same range, so we’re either correcting sideways or are on the cusp of another downside correction. I don’t really have much to add here at the moment and as I’m trailing the remainder of my positions near 2077 (which was almost called in yesterday) there is no reason to touch this campaign. 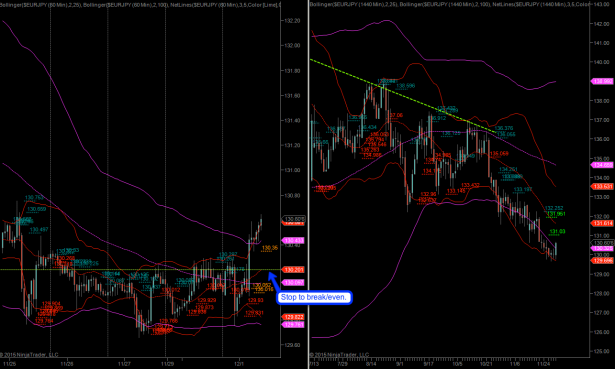 EUR/JPY Update – it was a bit of a long shot but it seems to be paying off. Moving my stop to break even here. BTW, I almost got taken out there and wisely had decided to keep my stop below the lower 100-hour BB. Once again the policy of wider stops thus sacrificing a bit of leverage for better protection paid off. 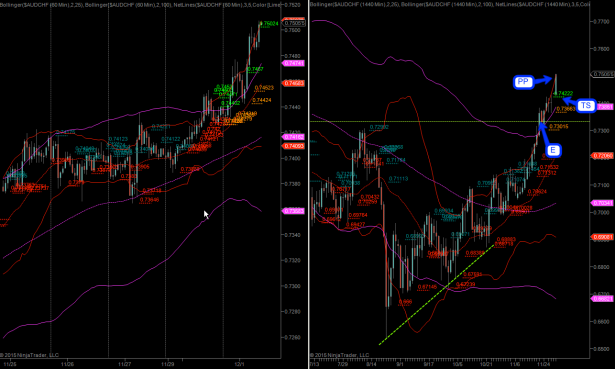 AUD/CHF is turning into a textbook trend trade. Very few people would have taken a long position outside the upper 100-day Bollinger but it is exactly there where short squeezes can happen. And once a forex pair gets going it often runs like hell. I took partial profits a bit over an hour ago and will trail the remainder of my position near the current daily NLBL.