MENU
Sections
Login Register
Education
Now Reading
Thank You Sir May I Have Another?
NextPrev
2085 285
36

Thank You Sir May I Have Another?

One tough lesson we all wind up learning during our time as traders, professional or otherwise, is that being right means nothing and being profitable means everything. Now that statement does not give you license to simply follow your whims as long as you wind up being profitable in the end. Instead the point I’m making is that you can be right but still wind up losing, especially when Ms. Market decides to turn into bitch mode. Did that sink in? It should because there are important implications:

Success Has Many Fathers But Failure Is An Orphan

The need to be right is a fairly prevalent trait among people of every single culture on this planet. We all want to do ‘the right thing’ or the ‘smart thing’. We want to get ahead in life and that by definition means that you’ve got to be better, faster, smarter, sexier, funnier, etc. than the next guy or gal. Admitting to failures certainly isn’t a favorite activity for most of us, especially if there are real life consequences. Thus in many cases we have a tendency to ignore failures or errors and just focus on ‘the positive aspects’ of whatever we are doing.

However if you never acknowledge your mistakes then you won’t be able to learn from them. Americans are actually pretty casual about making mistakes as the general culture does not linger on past failures and instead chooses to focus on the future. Over here in Europe entrepreneurs for example are a pretty rare breed mainly for cultural reasons: Make a mistake or fail once and you’ll never hear the end of it. Certainly nobody is every going to fund your venture if your previous endeavor failed. Which is maybe why pointing out personal shortcomings to the average European will often be met with rather vehement resistance and outright aggression, while doing the same in the U.S. may just earn you a sheepish smile. Despite being born in Europe I personally prefer the American approach as I believe in acknowledging mistakes but then moving on to bigger and better things.

A significant aspect of being a trader involves dealing with losses. Everyone loses and they key of trading in essence is winning more than you lose. Which it why it is essential that you don’t ignore mistakes and optimally try to learn from them. At the same time however it is crucial that you don’t linger on any feelings of anger or frustrations but simply acknowledge what has happened and then move on.

Now let’s look at a good example, courtesy of yours truly: 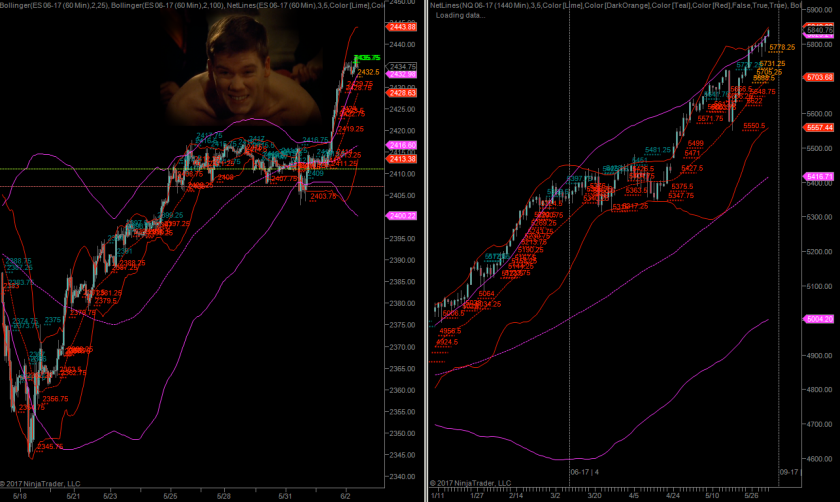 Just looking at this chart makes my blood boil. Yes I read the chart properly and I expected a little shake out. But clearly I was way too optimistic with my ISL and thus got taken to the cleaners just before the market took off and probably robbed me of at least 3.5R.

But it happens and it will happen again. It will happen to you, to me, to everyone out there, no matter how hard we try to avoid it. It’s part of the game. Accept it. There is no hall pass for us traders – everyone gets some – all the time. That’s right, better get used it. Thank you sir may I have another?

The Market Is Smarter Than You

Now remember that I had anticipated almost all parameters: The BB was compressed and I knew that there would be a break-out, I had a good feeling that it’ll go up. The trend was on my side. But still I lost 1R instead of earning over 3R. Why? Because the market isn’t a linear entity and it follows a random walk. Anything can happen at any time for any reason. There are simply too many participants and variables for even the smartest statistician to know what comes next. At best you can develop a confidence interval based on the data available but depending on where you stand you may still end up being wrong.

And this is exactly why trading is hard. Most people cannot accept that being right means very little. Sometimes you’re right and you win. Sometimes you’re right and you lose. At other times you may be wrong and you win anyway (due to some market event), and many many times you’re wrong and of course you lose. The only way to deal with it is to simply accept the losses with the winners and focus on your trading. After all when you’re driving down the freeway and you hit a pothole you don’t get out of the car and walk away. You simply keep on rolling because it’s the journey that matters.