The 21st Century Has Its Benefits 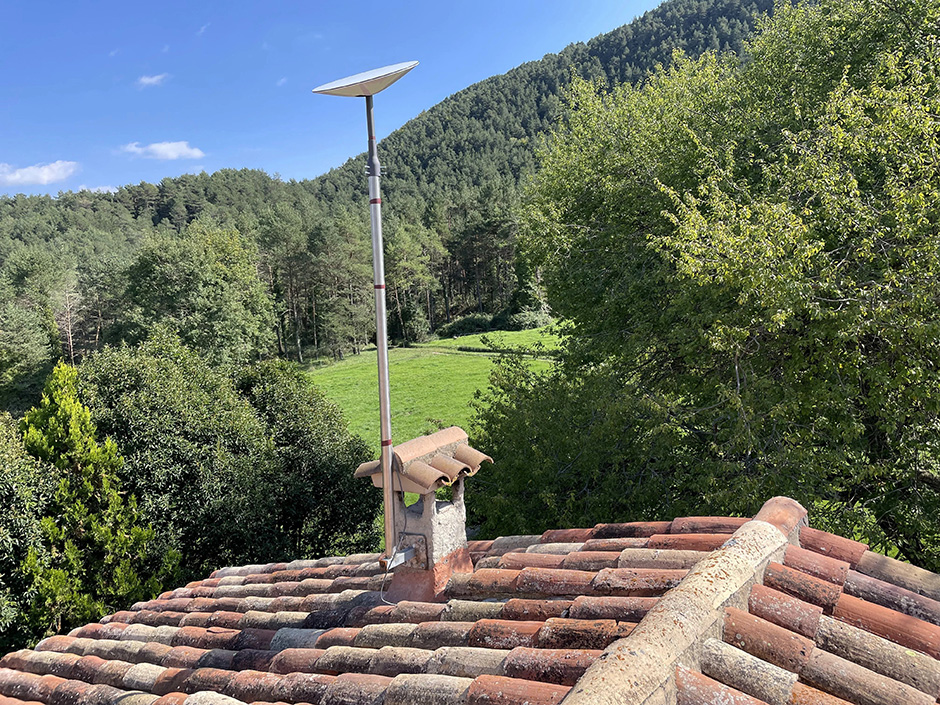 After nine months at our current location in the Spanish Pyrenees it is moving time again. The house we had rented was sold in spring, but lucky for us (and not so much for the owner) we had already extended our short term contract until the end of September, giving us more time to find a place we liked.

As much as I hate packing and moving I’m very much looking forward to getting settled in a more permanent situation.

The featured pic shows our Starlink dish (a.k.a. ‘dishy’) which I just installed at its proud new home. Pre-ordered in February of 2021 I had received it almost exactly one year later. Since then it had been lingering in a temporary spot where we didn’t even need it since we had fiber.

The first few speed tests are encouraging, ranging between 65Mb/sec all the way to 300Mb/sec. I suspect it’ll probably settle around an average of 150Mb/sec once ‘dishy’ has had some time to get settled. Meaning once it has mapped the geolocations of all Elon’s satellites and reoriented itself accordingly. 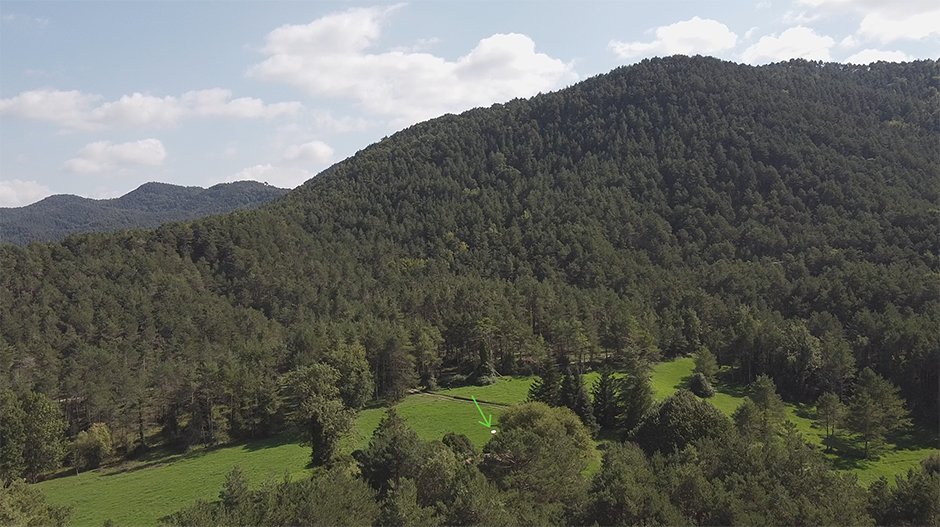 Here’s a quick snap shot I took yesterday with my trusted Mavic. The arrow marks the spot where the antenna was mounted. Talking about hidden away!

I am probably going to lower that antenna mast by about half to just above the chimney. And a lightning rod is probably also a good idea given that it rains a lot in that area.

As you can see the location is absolutely gorgeous and I couldn’t be happier. It’s been a long term dream of mine to move to the countryside away from big cities, and when Starlink was announced I quickly jumped at the chance to sign up.

It’s been a long and costly journey to get to this point, and it seems I’m finally ready to enjoy 21st century bandwidth in an early 19th century location. Thank you Elon Musk! 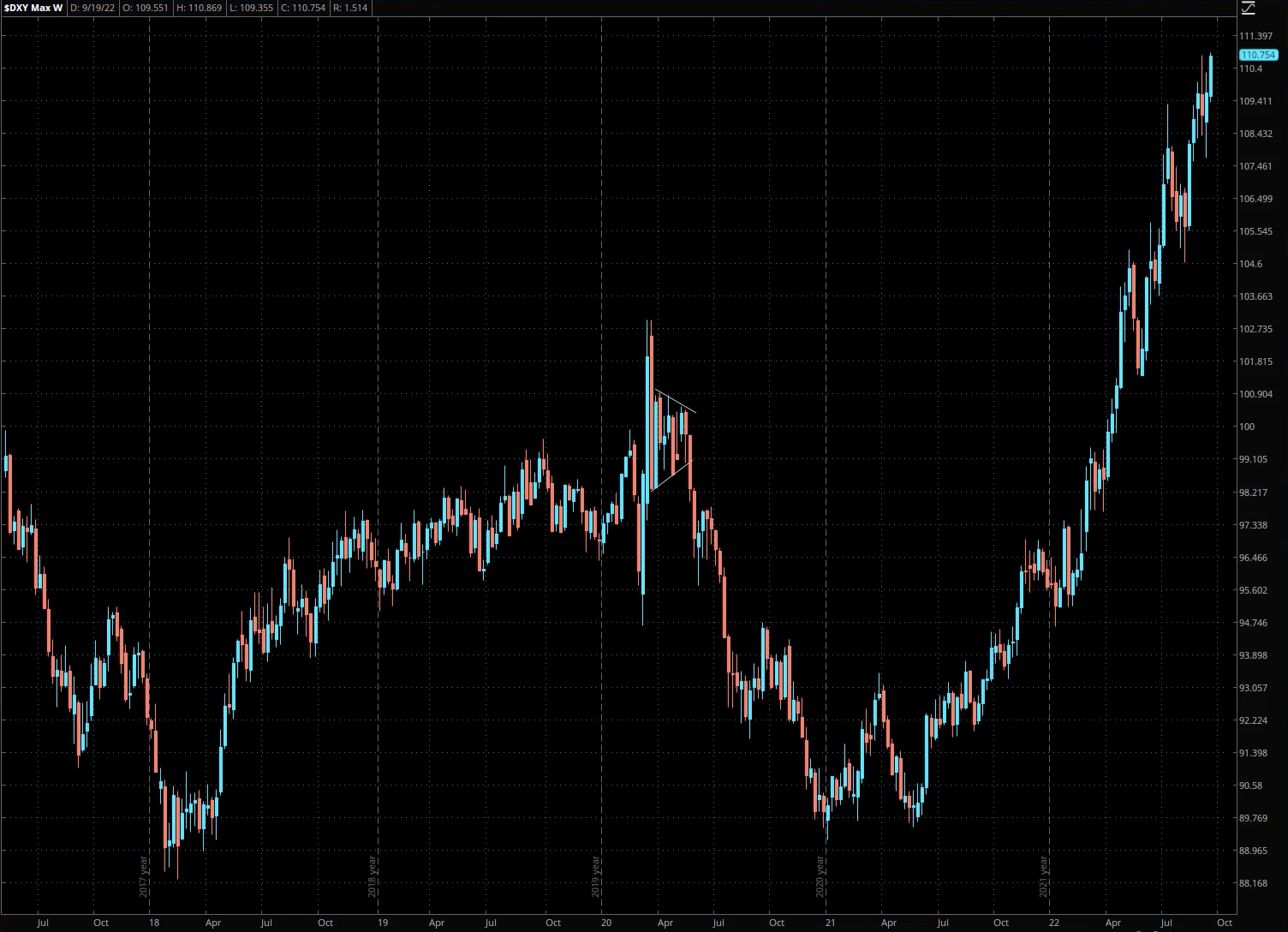 But enough about me, let’s talk market. Shown above is the only chart that really matters at the this point, the U.S. Dollar.

After a taking a short breather it’s now back in short squeeze mode with nary a hurdle in sight. 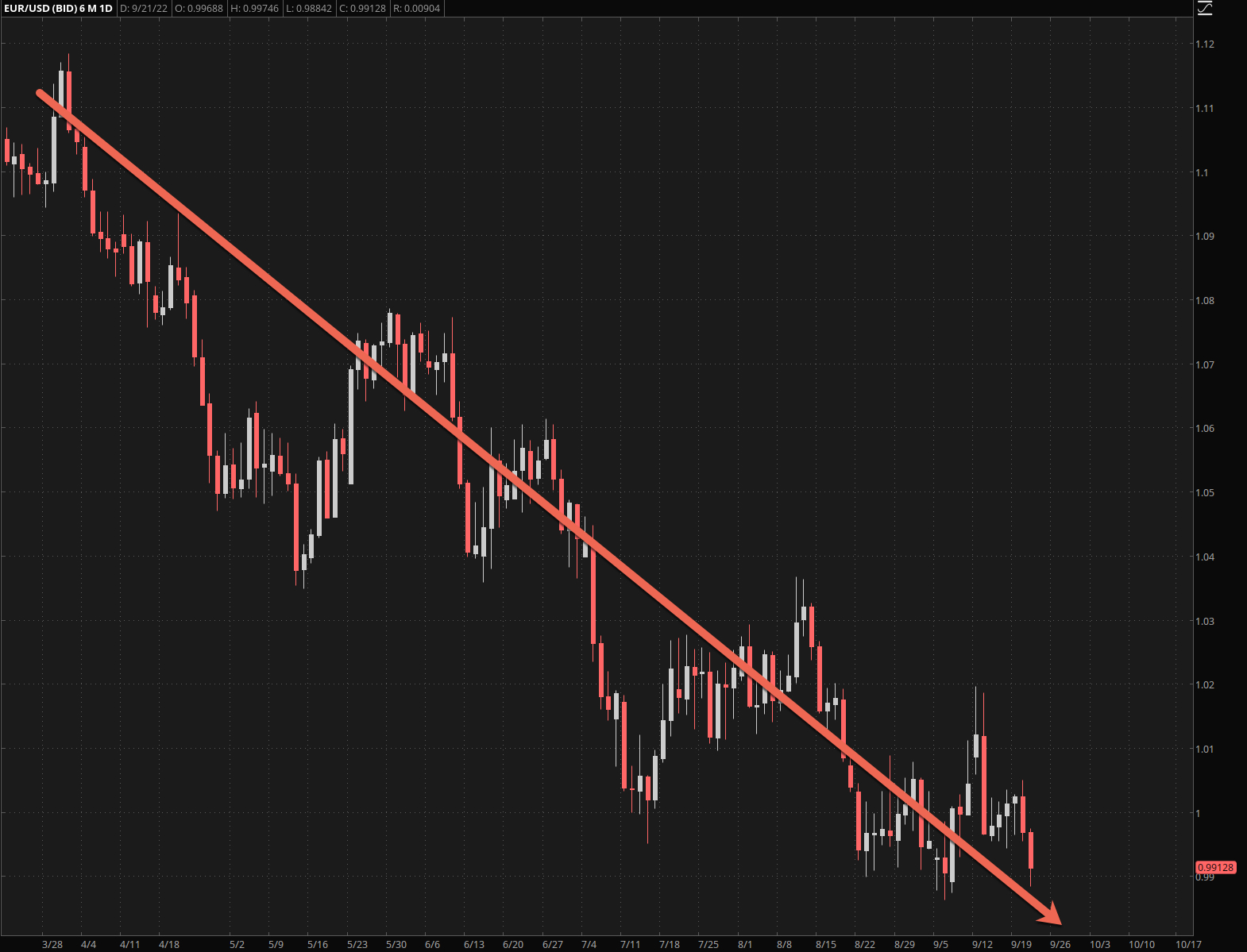 I have to tell you – seeing the EUR below par feels strange after having paid a juicy premium for over decade now. Of course you won’t hear me complaining. 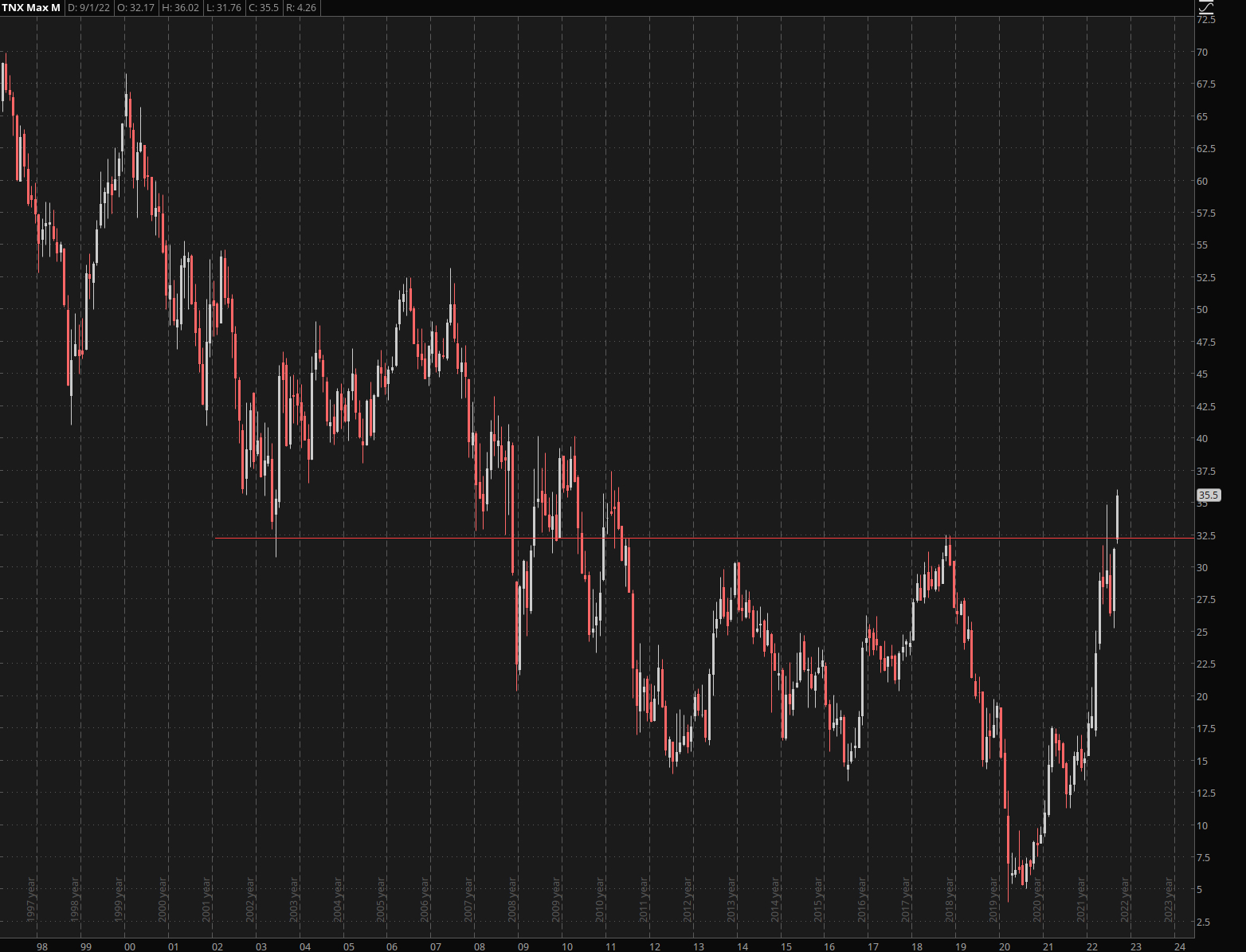 The other chart you should be paying attention to is the TNX – the 10-year treasury yields. 3.5% is massive given how fast we’ve arrived here. 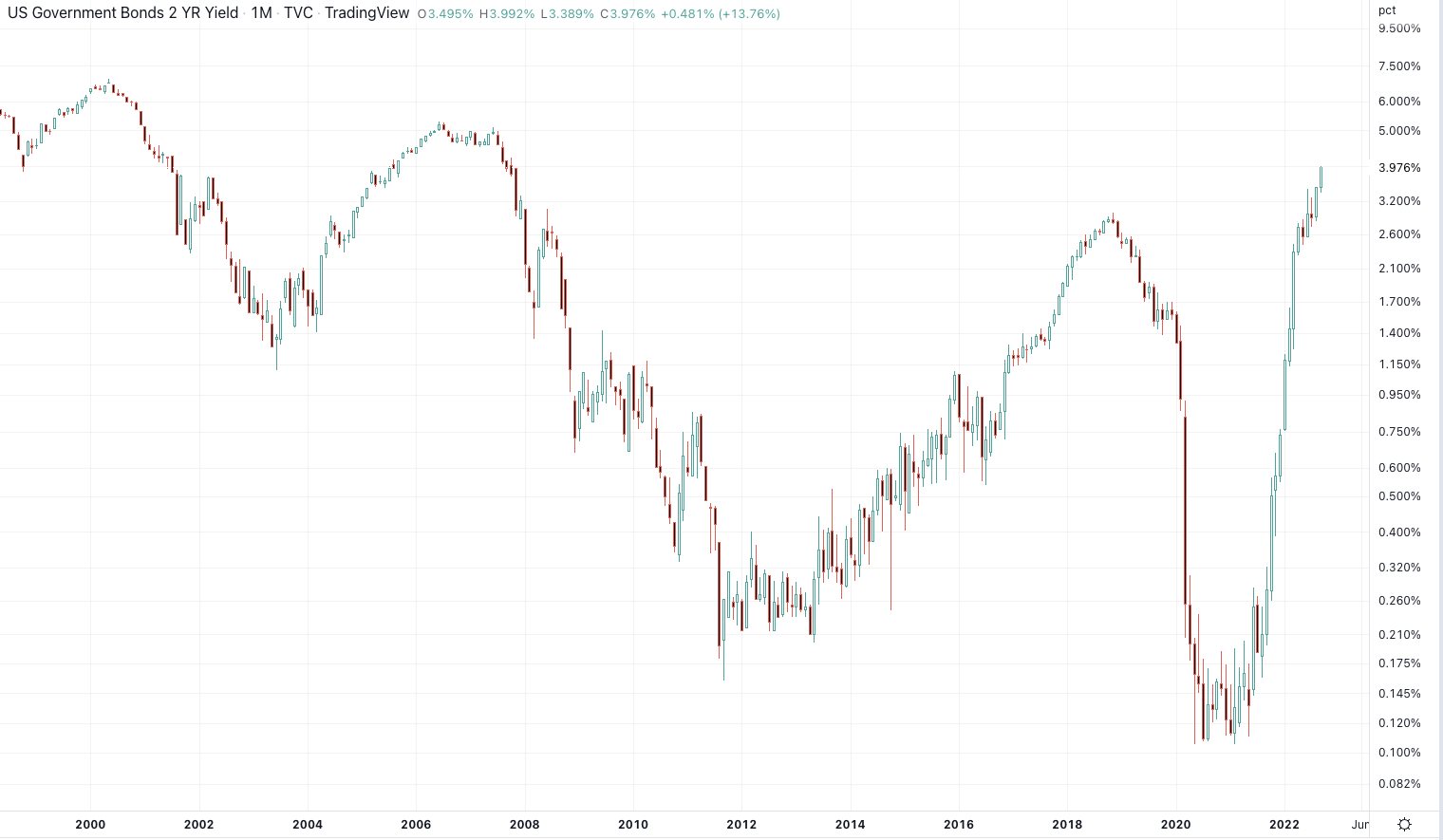 But it pales with nearly 4% the 2-year is heading toward. And yes, we are looking at massive yield inversion here.

Really bad medicine if you ask me. 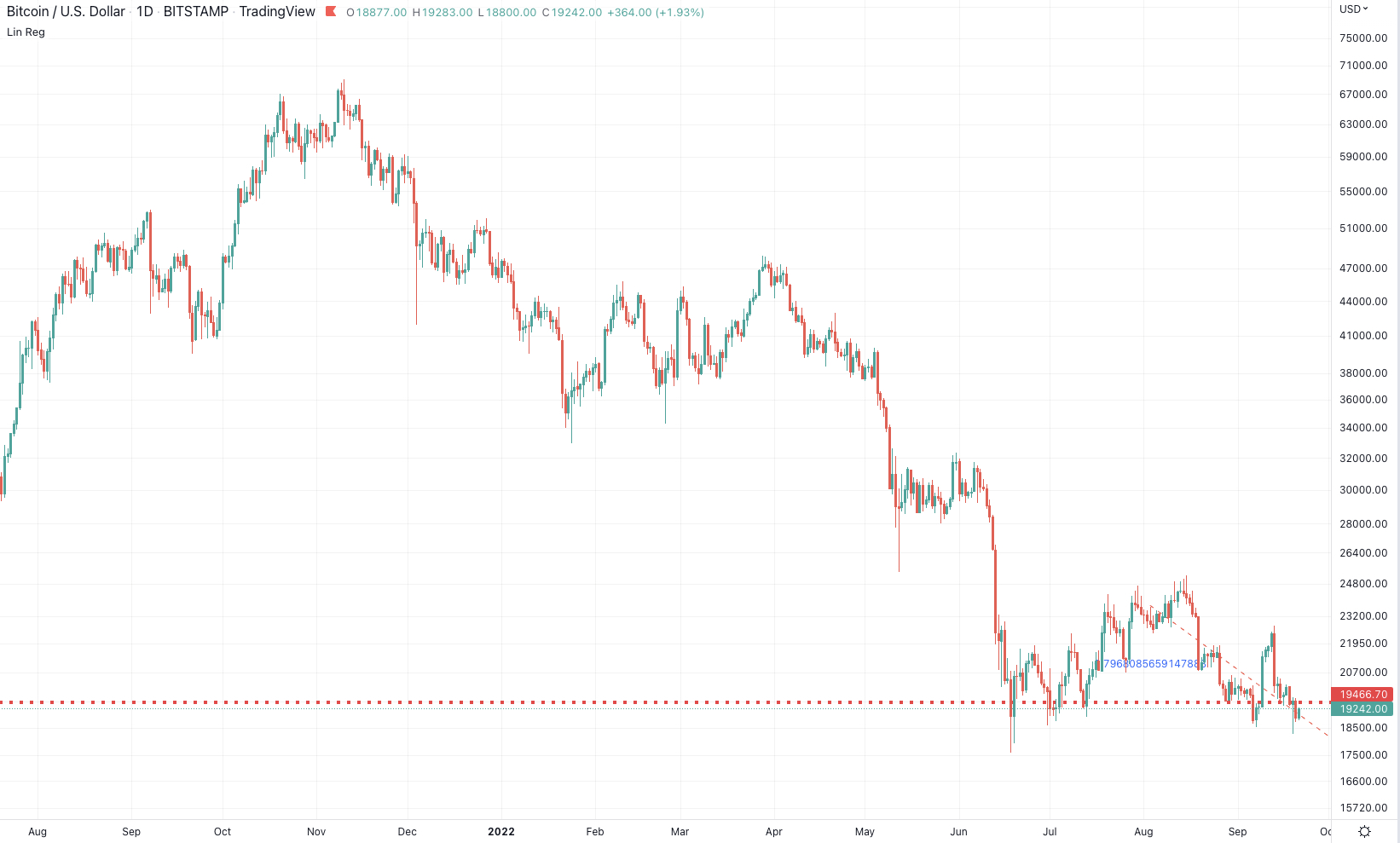 Bitcoin is also taking a breather but on the lower end of its current trading range. Not a bad spot to buy as you quickly know when you’ll be wrong, which of course is below $17,500.

Not really. This market is way to unpredictable plus I’m too busy trading the house down with our new Crypto Salary System (CSS).

The P&L shown above is up to date and now stands at a juicy 20R in ill-gotten gains in a little over 1 month (we launched it live on August 17th).

Again, these are NOT backtested results, it’s all forward traded in LIVE tape along with our intrepid group of beta testers.

It’s completely automated, with precise rules, and its average campaign period is less than a day.

Which is exactly what the doctor ordered in this crazy market, especially if you value your beauty sleep (I need all the help I can get).

Honestly it’s almost boring – once you learn the rules you won’t spend more than 7 minutes per day on it.

If you haven’t already make sure to reserve your spot for the FREE webinar I’ll be hosting on the 27th.

That day I will show you the ENTIRE system top to bottom – no holds barred. Looking forward to seeing you there.