Plenty of fireworks today and if you paid attention then you probably saw the writing on the wall last night. Before I hit the hay I emailed the following AUD/JPY setup to my subs: 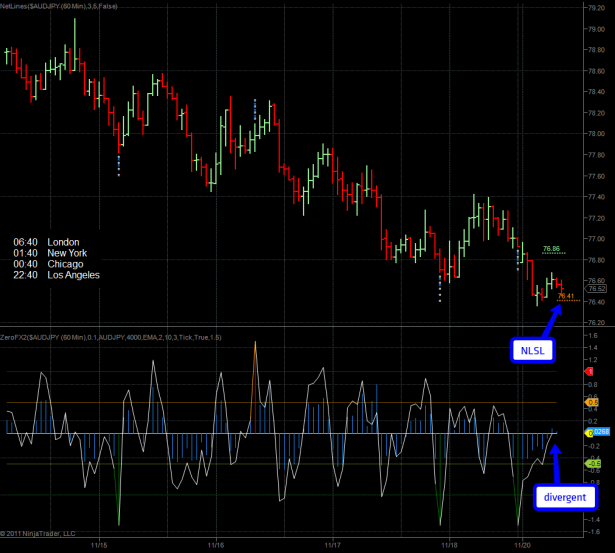 This was a great example of what should have happened and when it did not it effectively opened the door to a major move in the opposite direction. As you can see the AUD/JPY was sitting at a NLSL plus there was a divergence indicating possible selling exhaustion. In my email I proposed a long trade with a stop right below that NLSL – however to immediately be short if that stop got hit. Well, that’s exactly what happened and it switched the dynamics to a big gap down this morning over on the equities side. The dynamics now hinge on what happens today or tomorrow and I will cover this in more detail further below. 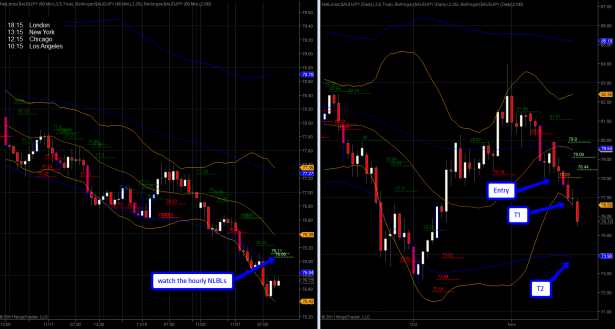 First let’s review last week’s FX setups – starting with the daily AUD/JPY. As you can see our NLSL at 78.03 is now well ITM and slipped quite a bit further than I had hoped. The question now is whether or not we are dropping all the way into 74 – as there is nothing but air below I believe holding a few lottery tickets into T2 would be much of a stretch. 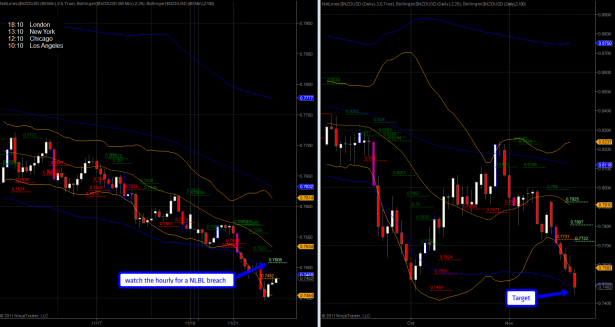 But the fun didn’t stop there – the NZD/USD gave us a juicy entry at 0.7731 and it’s been easy coin ever since. However, as we are now at our target I would close all lots and call it a day. If you’re a dare devil you may try a long position here but I personally would want to see a bottoming pattern or perhaps an inside candle first. 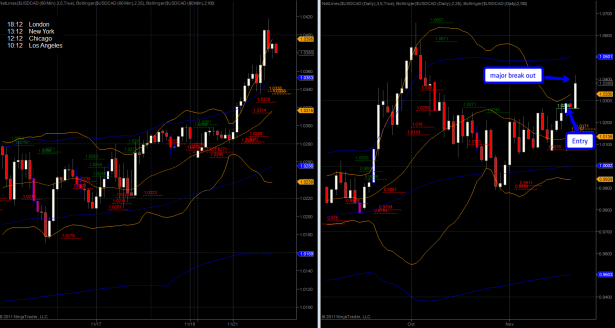 USD/CAD presented us with a NLBL last week and after hemming and hawing around a bit we finally got our pay day today. I admit that it was easy to get stopped out of this one as Friday dropped us all the way to 1.02 – but when it pulled up back above that NLBL late in the session the writing was also on the wall here. Think about that one if you believe today’s drop in equities had anything to do with the news. Anyway, I don’t like today’s pull back and I usually take partial profits after a break out like this. 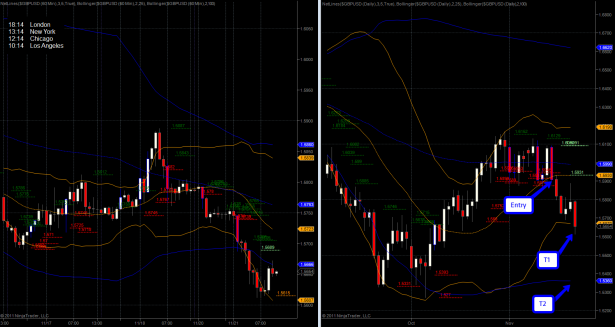 Next in line – cable: Again, we have a cluster of NLSLs that was breached and we now find ourselves at T1. This one also tried to fake us out on Friday and if you got in late then probably got stopped out at break/even. This happens and if you got whipsawed out then don’t over think it or blame yourself as there are always forces outside of our control. I am not yet convinced that cable is done here – if it doesn’t pull back hard today or tomorrow then we’ll probably see the 1.64 mark by Wednesday. 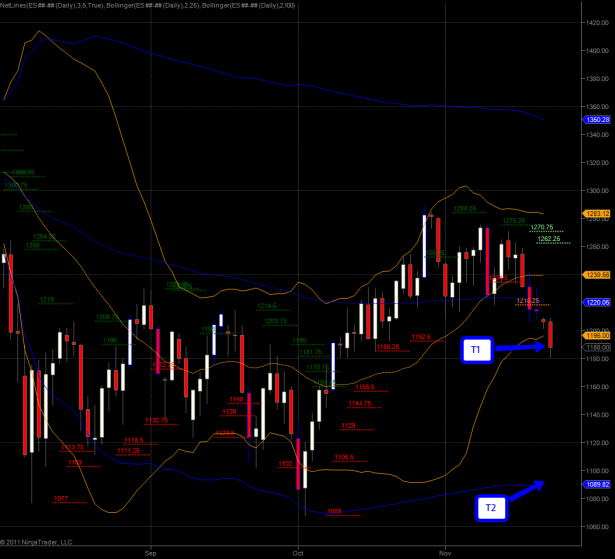 Now back to equities – if you compare the current configuration on the spoos (i.e. S&P E-Mini futures) with some of the currency setups above then it’s not hard to see the correlation. We sliced through the 1200 mark and the lower 25-day BB line this morning and are now in a circling pattern around SHTF International. As you can see there’s nothing but air below – the next logical support is the 1100 mark. So are we going to slide all the way? I do have some thoughts on that – please step into my badly decorated lair:
[amprotect=nonmember] More charts and cynical commentary below for anyone donning a secret decoder ring. If you are interested in becoming a Gold member then don’t waste time and sign up here. And if you are a Zero or Geronimo subscriber it includes access to all Gold posts, so you actually get double the bang for your buck.
[/amprotect] [amprotect=1,13,9,12,5] 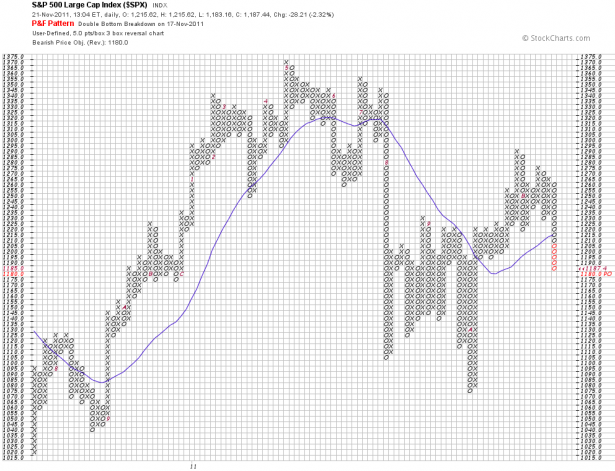 My SPX P&F chart claims a target of 1180 due to a double bottom break down on the 17th. That and the charts I’m about to show you give equity bulls a decent chance of keeping the barbarians from crashing the gates. However, if they fail to do so and lose the 1180 mark then you can kiss your precious Santa Rally goodbye for good. Let me show you what I’m talking about: 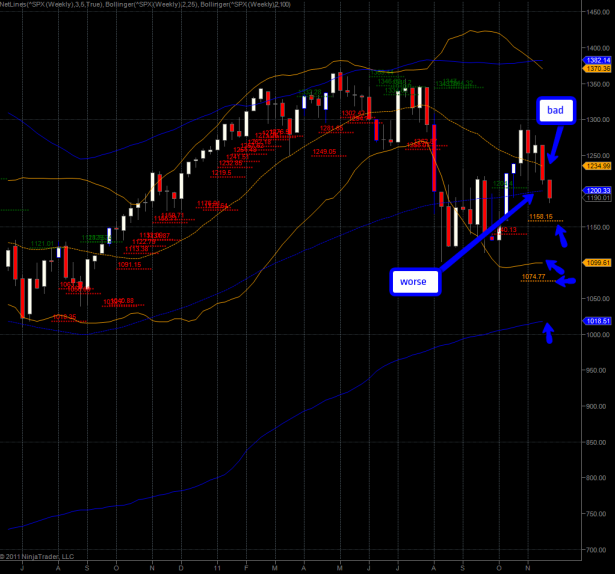 Here’s the weekly SPX chart. As you can see the breach of the 25-week SMA was bad – but if we wind up closing below the 100-week SMA it’ll be much worse as both would function as significant resistance in late December and especially early to mid January (except for the very first week of January a seasonally bearish period). I have pointed toward possible support clusters looming below but who am I kidding – if we slide further here then it’ll probably be quick and very ugly. 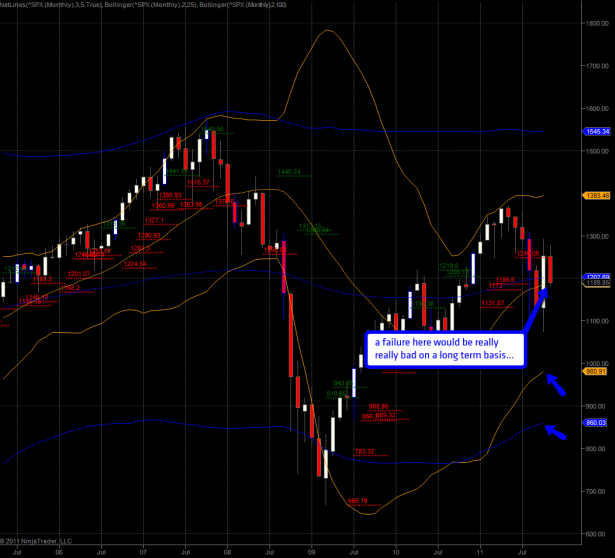 The monthly SPX is looking even scarier. It seems we are in process of dropping back below both monthly SMAs – and if November closes below it would be considered a technical retest and failure. It would also reconfirm the bearish long term trend that started to unfold in May of this year. So in essence – this would be a great spot for the bulls to step in and punish the bears – if they fail to do so it’s lights out for the coming weeks and probably months.

It’s looking ugly and 1180 should be considered the Maginot line for the bulls. If we drop any further then things will most likely become unhinged in a jiffy. I am not saying it will happen but if we drop through 1180 and/or close below those weekly and monthly SMAs then the bulls are in a world of hurt and recapturing the current levels will be the least of their worries going into the new year.

Look out for signs of stabilization on the currency side – your usual suspects: AUD/JPY, EUR/USD, GBP/USD, NZD/USD, and USD/CAD – those are among my favorite pairs and overnight moves on those four usually give me a pretty good idea of what’s in store for the equity side.
[/amprotect]

I would also like to point toward the daily Zero as the one chart that has remained bearish all along: 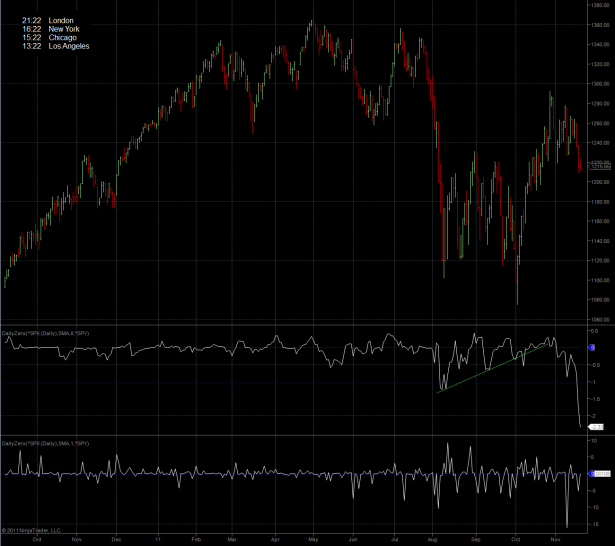 That is Friday’s snapshot and as you can see it had remained increasingly bearish all through the late fall triangle. Where is it pointing today? Well, there’s only one way to find out – or you can do like GG and fish for clues in the comment section 😉