Some days are boring- and some make seasoned traders say WTF? Friday was a WTF day for me—the market is calm as can be, and I am starring at option data that raises the hair on the back of my neck. Sure the tape had absolutely ZERO OPEX volume- and CNBC touts are saying, “Sideline money is coming in…”  but my radar screen is screaming retardation.

Seasoned option traders are not idiots – they gauge risk better than anybody else. Option trading is not for the faint of heart – if one does not understand the game- one is as good as dead. As of this week option makers are not selling puts or selling deferred IV, while call volume is surging.  Sure this stuff happens in December and these indicators can be early – but Santa is gone…

In any case, for every retail call buyer there is a seasoned call seller. There were nearly 100mm net OCC equity calls less puts over the last 30 days — drink the kool-aid if you want. Skews and IV time spreads are utterly absurd, VIX and VXV are both trading outside bollinger bands, and call buying has gone from beartard to bulltard. Yes the trend is higher, and yes we had volume capitulation on the low, and yes there are Euro shorts, but gamma has been falling like natty gas in many markets. 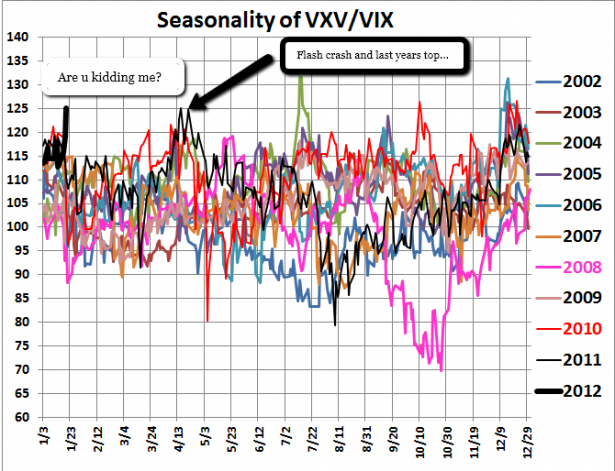 C’mon- this is retarded- and frankly bearish as crap in the short-term. Notice that even in 2008 December expired in a predictable value- even with a VIX that traded north of 50.

This next chart is a spin off of the first chart that shows the seasonal tendency is lower- not higher here. Or contango/time spreads should be narrowing not widening… 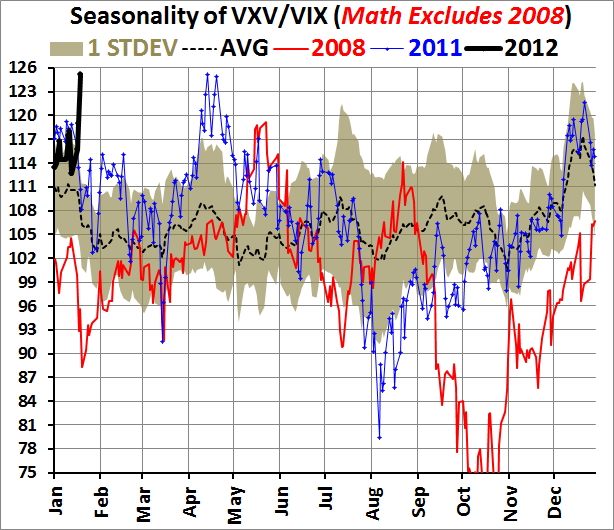 You see how unseasonal this move is? We are not only outside of Bollinger bands on the daily chart- but it is outside seasonal band too. There is a reason for DEC and APR to have retarded sentiment- its called holidays. Listen to the time spreads- they are telling you that IV is not going to stay this cheap.

I never fight the tape in December- remember all my posts? This is the reason- we know the market goes retard in December- but FEB?  FEB is a bad month.

And 1 more chart for perspective. 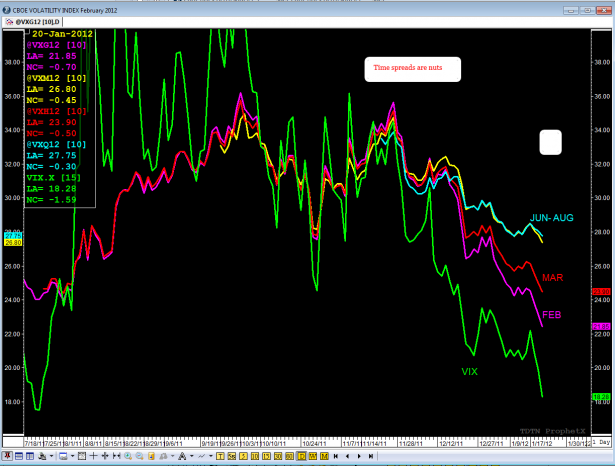 Clearly the VIX is cheap relative to deferred implied volatility. 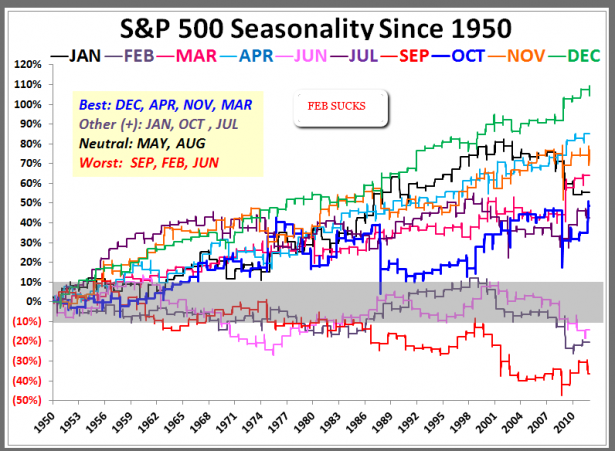 and here it sucks again. 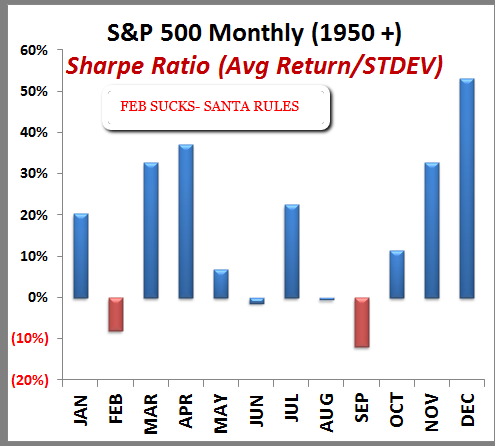 Now I am in the process of beating a dead horse… consider my old probability of a VIX(buy)/SPX (sell) signal. 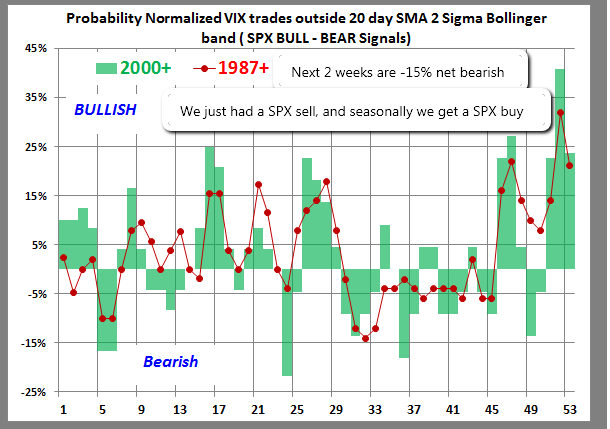 This chart will be confusing- but the key here is that Friday gave us an SPX sell signal (or the first step) and the market tends to give us and SPX buy signal in MID-FEB. This simply means the VIX has a tendency to go from the lower Bollinger band to the upper bollinger band- which does not sound bullish to me. On a net basis it is the 3rd most bearish probable set of weeks for the SPX.

I know many do not believe in seasonality- but seasoned option’s traders do… and they also don’t listen to CNBC- Just fyi. 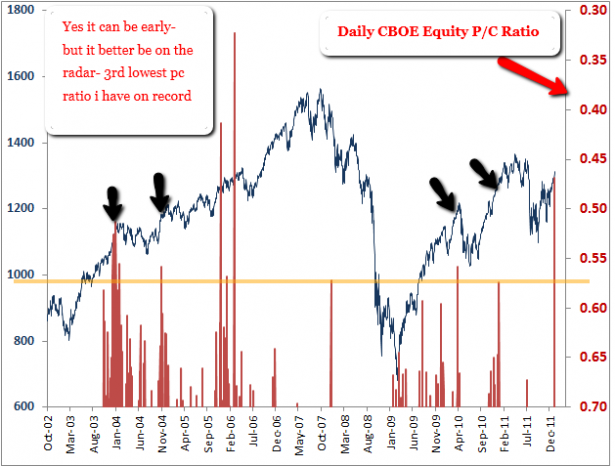 And go figure- sentiment has gone from full bear retard to full bull retard in terms of option volume. Unreal. 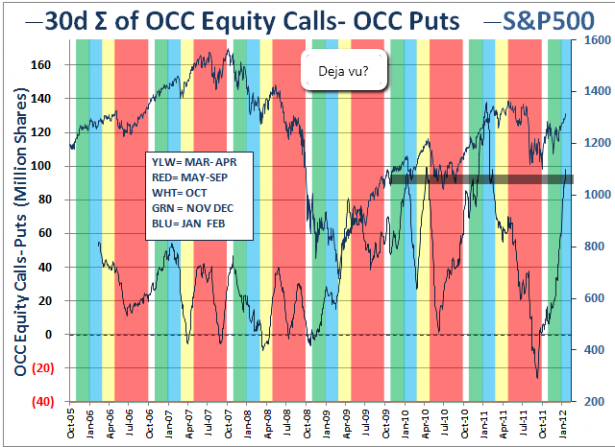 I want you to take this chart and then run it next to the stat “signal” chart below. They jive to say the least.

Also consider short interest…. the shorts have been squeezed…. 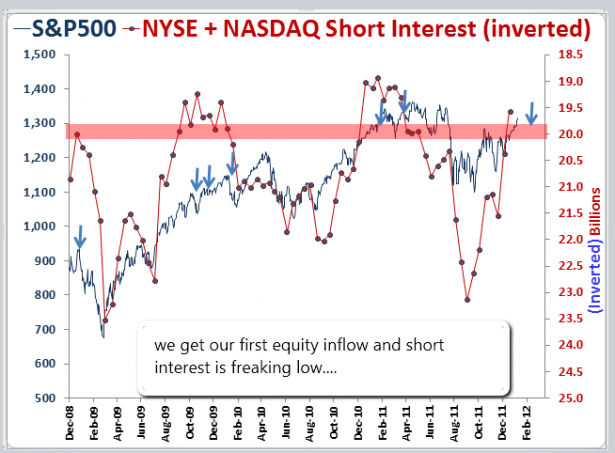 What a squeeze- glad I have been on the right side of this…. 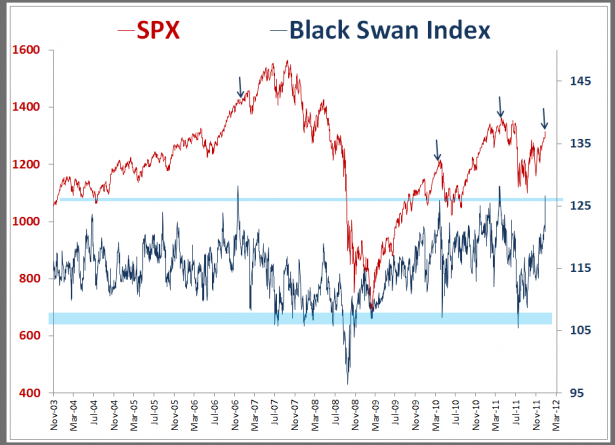 And just some quick stats on some the variables I am looking at. 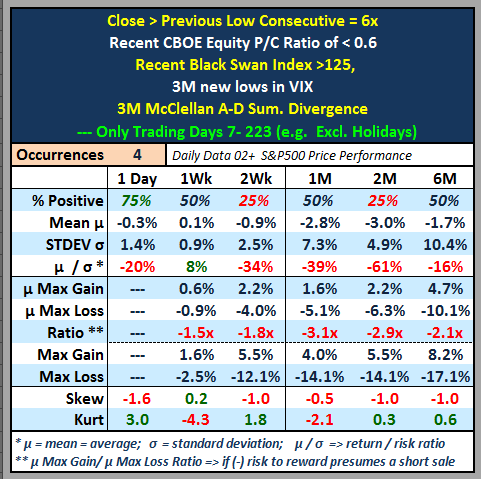 The max loss/max gain ratios are not something to be overlooked IMO.

And a chart for perspective. 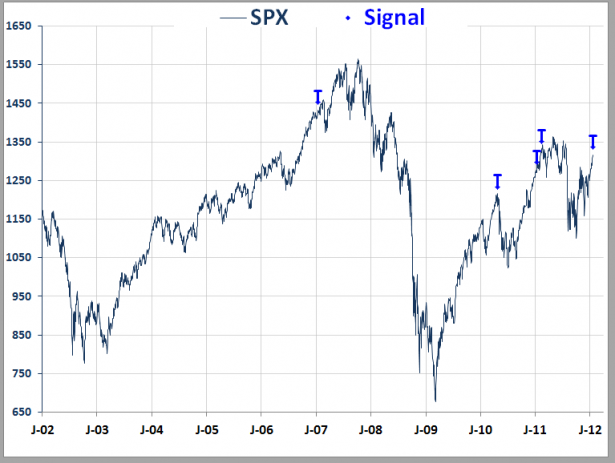 Ok now how do we play this irrationality?

Well there are multiple ways- but my idea might be unique. 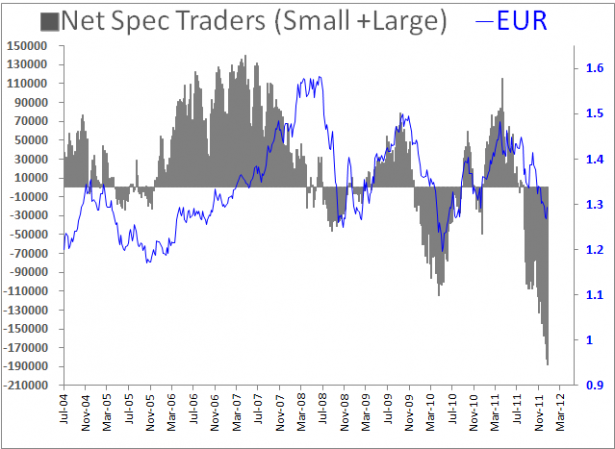 I know what you are thinking- well why would I want to short Equities with this type of crowded trade in EUR and the recent trend change in bonds?

Well I may have your answer. Euro may be due for a short squeeze, and equities are due for a retail retard flush. Well to me the pair is a bit retarded- maybe time to sell the pair? 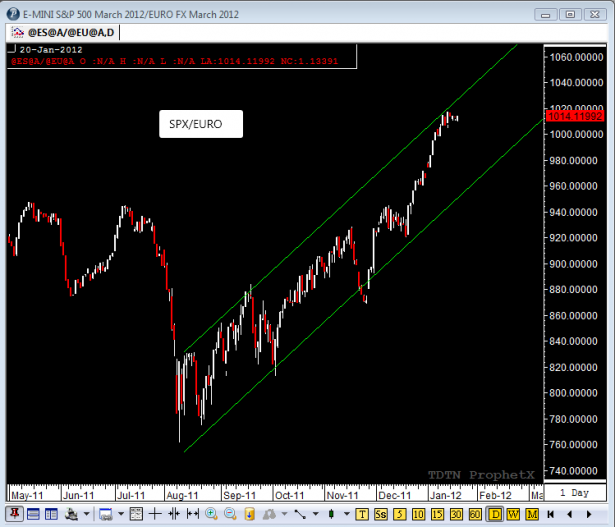 Now nothing is simple- especially when one looks at the EURO IV. 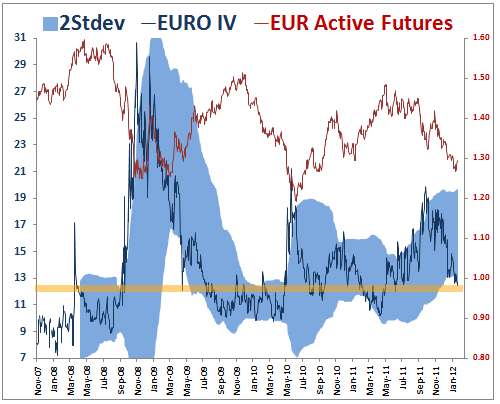 What does this tell me? Well it tells me there may be shorts in EURO- but the option market is complacent. So maybe the EUR wont get a short squeeze…. what are the odds EURO IV makes new lows? Seriously- that one is hard to contemplate, given that we all know what the end-game is over there.

And I am not the only one who is taking a contrarian viewpoint. Here is what SentimenTrader said last night. 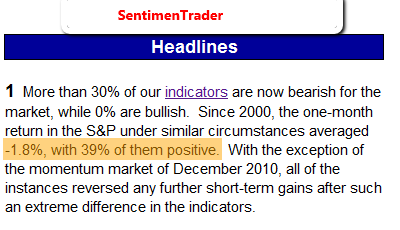 BOTTOM LINE: Last week was a WTF day for a seasoned trader. A variety of indicators such as put/call ratios, vix time spreads, vix skews, vix (SPX sell) signals, and seasonality are all saying risk is to the downside in the short-term. If you are in the options market- I suggest you do not short gamma and vega. I would also add that Corn IV has a similar story- we are also testing extreme bounds that make any vega/gamma buyer excited. One has to sit in awe as SPX, EUR, and even Corn IV all go to dangerously low- even retarded levels, and yet, global financial risks rise each day. 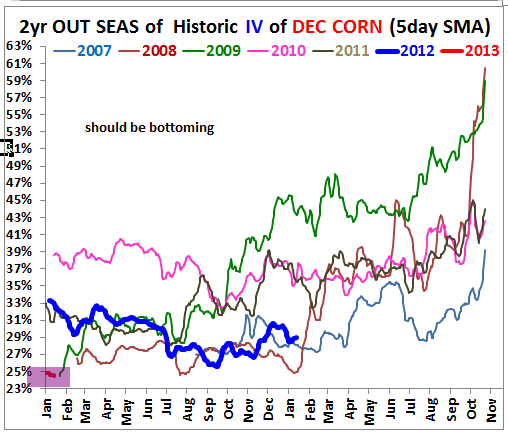