It never fails – on the few occasions I leave town for a few days something really interesting happens – this time was no different. Boy, where do I begin? It all unfolded Friday evening when the VIX closed outside its 2.0 Bollinger: 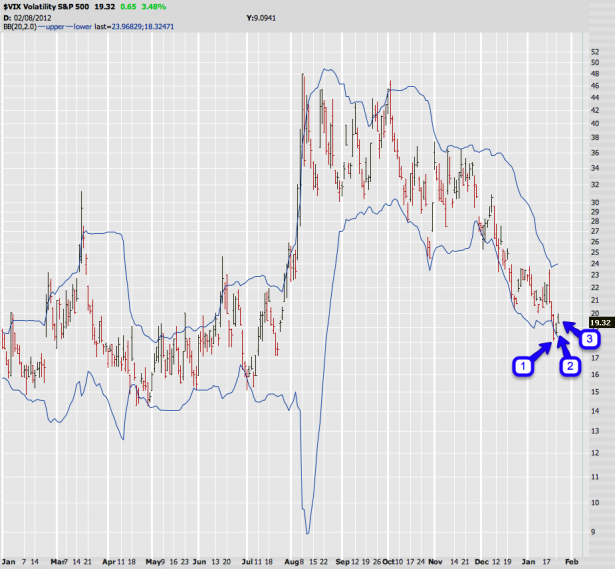 And that of course put a potential VIX sell signal (relative to equities) onto our watch list. In case you are a noob – here are the rules again:

For a VIX confirmed signal you need 3 events:

Once you get those three events a major reversal usually occurs within the next week. The sell signals used to be far more accurate than the buy signals, but in the past two years that relationship has reversed, thus I think it is dependent on the ongoing trend, which kind of would make sense. By the way, I’m adding this to our cheat sheet – for obvious reasons 😉

Yesterday we actually closed higher and inside the Bollinger – which satisfies step 2. And unless the VIX drops rather strongly in the next two hours I think we just may have ourselves a bonafide confirmed VIX sell signal here! And you know what that means – at the very least do not be long here. 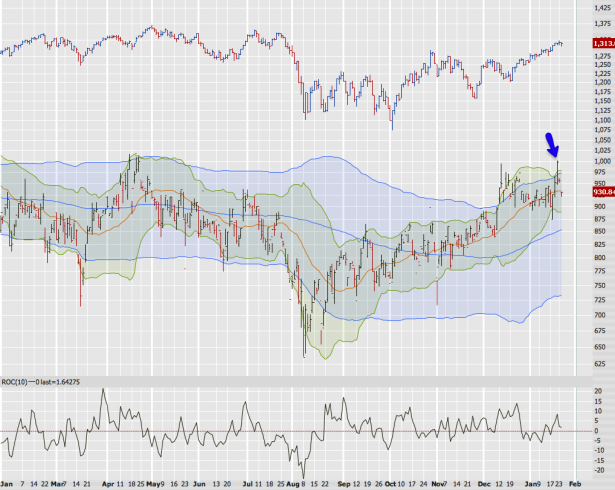 It’s a bit late in the game but just FYI – the MMMR also painted an exhaustion signal to the long side on Friday. Great timing for me to head for Vegas – as I said, it never fails and the rats refer to it as the ‘Mole Factor’ – the ultimate contrarian entry signal.

Now, thus far we have been just fucking around sideways – as usual the tape is playing dangling carrot with the bears. If you we really get a meaningful correction here then there is a cluster of support that first needs to be breached. And unless we do so in the next week then whatever correction we may get may just be to the downside. 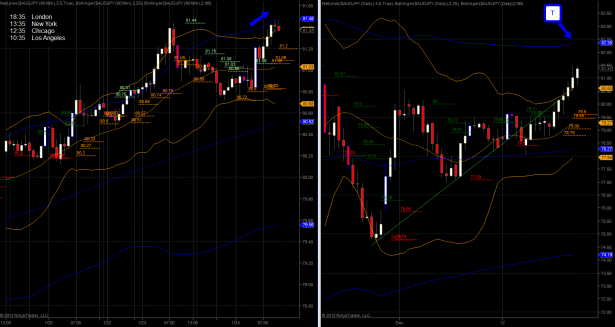 Another reason why I still remain a bit skeptical about any real fireworks on the bearish side is the AUD/JPY which has been happily pushing higher toward its target zone near 82.35. Volar did a great job applying his quant skills to the contradicting furball that we are dealing with right now. And I agree that we may just get a little shake out in equities before turning EUR momentum on the currency side continues to float all boats in stocks. I for sure would not want to be short the Euro or long the Yen right now. 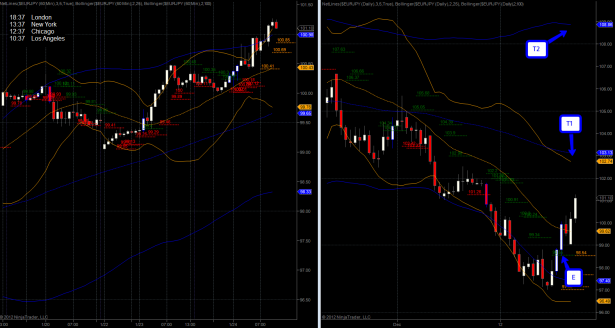 Talking of which – our EUR/JPY trade is starting to look pay off in spates. When we took our entry near 98.5 we were a bit skeptical about the signal and expected to be stopped out during a more complex bottom fishing expedition. Well – for once we were proven wrong in a good way and the beast just kept on pushing up, making quick business out of that 25-day SMA near 99.6. At this point there’s only air above and I plan to hold this sucker all the way into 102.6.

Which brings me a few more FX setups we’ve got on our plate today. I also have one special chart you simply cannot miss and may just turn into the trade of the year. We have been waiting for a while and it seems all those chickens we sacrificed at full moon seem to have appeased the evil forces running this tape: 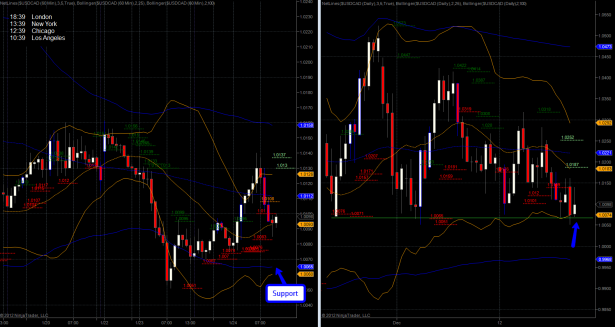 Behind door number one we have the USD/CAD, which is sitting right at a delectable medium term support line. I’d be long here expecting a push into 1.0187. If stopped out below that lower 25-day BB I would take my business to the downside and be out near par or a bit below. 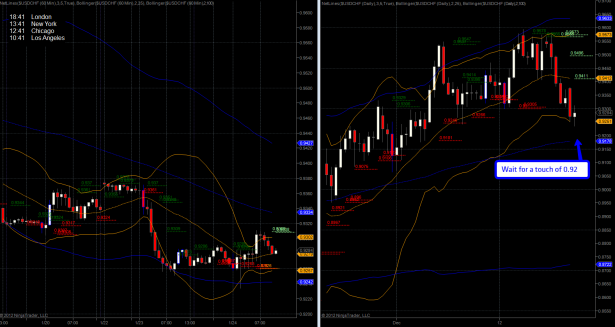 Behind door number two lurks the USD/CHF – but it’s not ready for a real commitment just yet. I would let this one mature a bit and jump on it with a long position once it gets near 0.92. 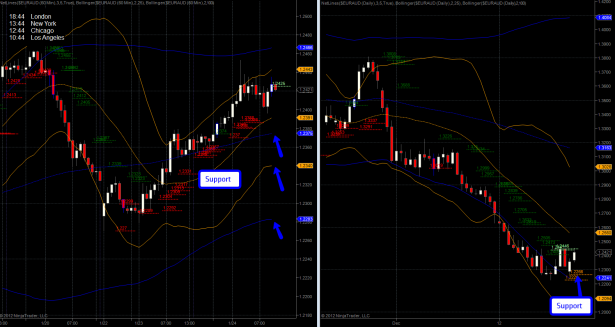 And behind door number three we have the EUR/AUD which is now in the process of painting a floor. Its first attempt at breaching two consecutive NLBLs near 1.244 were thwarted but it’s back with a vengeance. I think you know the drill here and if you get stopped out you can flip this trade and bank a few pips into 1.23. 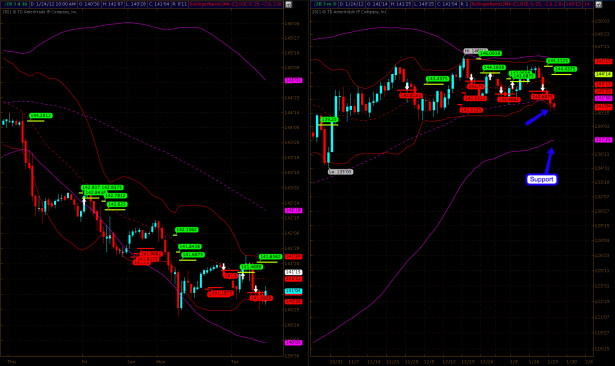 And finally the chart you have been waiting for – I’m sure you remember the 30-year treasury setup I have been pimping for the past two weeks. And it may just be right for the plucking. 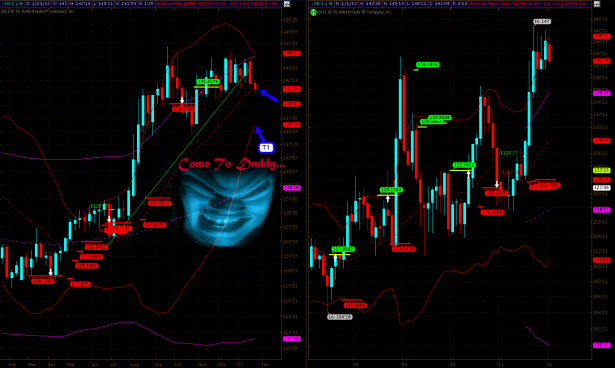 That 25-week SMA appears to be giving way and I would be short here with a target around roughly 137. Watch that daily chart however – we have some possible potholes on the way near 137’25, so I would lighten up there and keep a few lottery tickets into 136.

Should this setup fail – meaning if you get stopped out – then I think we have a nice support level trade into 134’13 – not as juicy as the downside but as omnivorous stainless steel rats we take whatever we can get.