Irrespective of today’s news induced volatility we are now looking at some pretty top heavy tape. As I have retained a distinct and horrifying memory of summer 2009 I would be foolish to suggest a major reversal being in the works – but I do think that the market is now over extended enough to justify at least a short term correction. 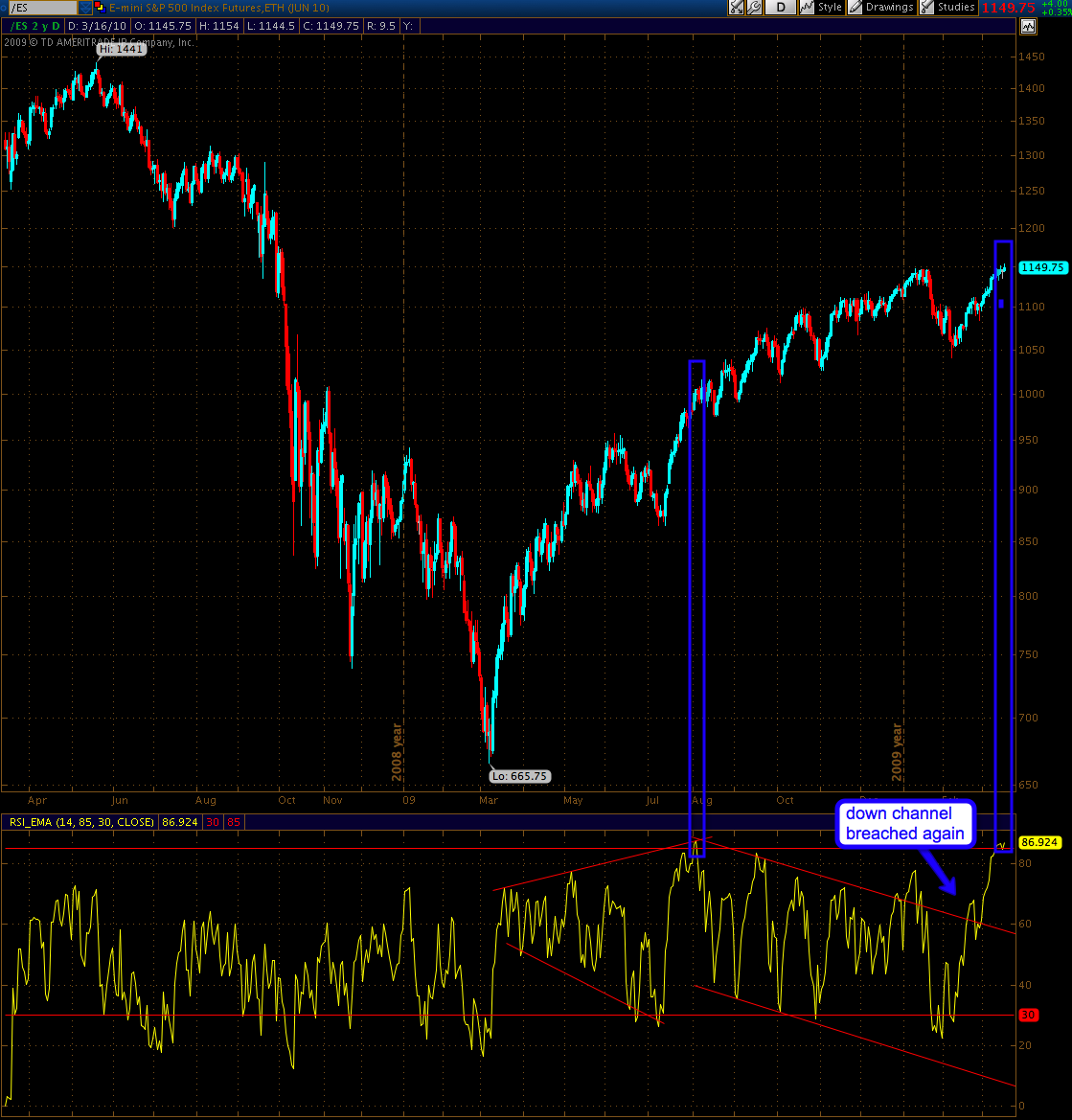 This RSI_EMA chart has treated me pretty well in the past year. Usually a reading above 85 means that we looking at a correction in which an overbought situation relieves itself so that new buyers are able to step in (yes, Mole actually just said that). If you look a bit deeper you also realize that the degree of optimism does not seem to matter much. Case in point – last summer we hit the 85 mark and after that it took a few more days for the tape to reverse lower – not by a huge amount but it was definitely a nice trading opportunity, especially if you sold low vega close to the top.

What’s also interesting is that channel to the downside which is highlighted on the RSI_EMA panel above. About three weeks ago we had reached the upper range of that channel and it first seemed that a downside correction was in the works (i.e. the drop lower). But equities recovered quickly and the RSI_EMA kept pushing higher – at which point I basically told you guys that Soylent Blue was pretty much in the toilet.

This chart and many others I am not showing currently is why I have become a bit quiet as of late. It’s not that I’m giving up – but I need to see more tape before I venture into any type of predictions. What I feel comfortable saying is that we’ll see a correction in the next week to ten days. Right – you rats don’t need me to figure that one out – granted. But where I’m a bit soft right now is the big picture. The tape right now needs to resolve itself so that the long term trend can be firmly established. We are at an inflection point right now and if we don’t see any strong downside and instead will be presented with tape not unsimilar to what we saw last summer then I fear that I will have to change my tune as to when P3 is expected to appear on our radar. But as of right now I don’t know anything – yet – and I seem to be among the few analysts who are comfortable admitting this.

Quite frankly – we are in such uncharted territory in such a narrowly traded market that making any predictions is tantamount to predicting today’s volatile swings. It’s simply impossible and I will have to reserve judgement until I see more evidence. Now the market has produced a lot of bullish evidence all last year – and that’s the trend right now and right here. After the looming correction we will be able to identify what’s next – until then I will simply focus on trading the short term (i.e. Geronimo, Rammstein, and the Zero).

Stick with what works right now – which is trading intra-day and perhaps some discretionary setups. Everything else is just talk and if someone shows you their chart from a few months ago which predicted where we were going he (and perhaps especially she) doesn’t show you all the charts that pointed in the opposite direction 😉