Equities continue to defy gravity but at the same time we’re accumulating evidence that a shake out is nigh and that means I’ll be bowing out of our current long campaign on the E-Mini. If you’ve traded along then I encourage you to at least take partial profits here – let me show you what I’m looking at: 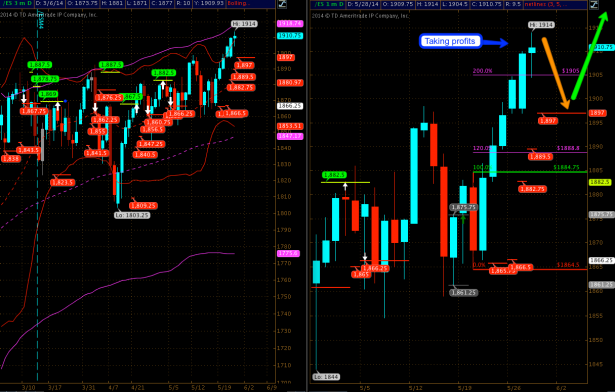 We’ve earned about 1.5R at this point and although it’s nothing to write home about it’s money in the bank and we’re taking it. Actually if the trigger had been a bit smaller I may have simply tightened up my stop but the current potential for a shake-out suggests that it’s best to cut out here and reload at a better opportunity. I don’t have a crystal ball but wouldn’t be surprised to see the plotted scenario on the chart start playing out sometime before the EOS Friday. 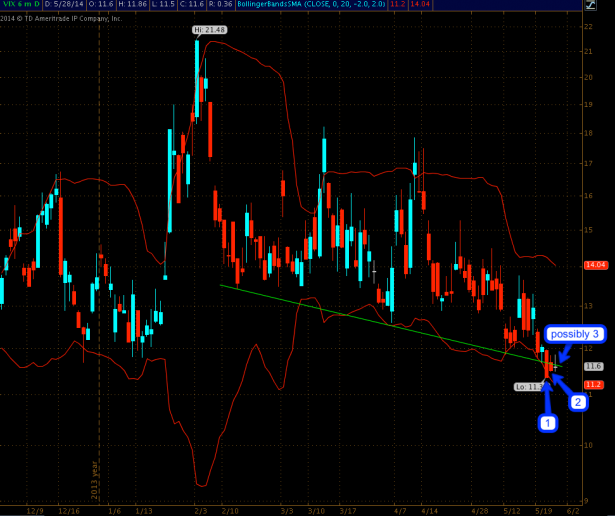 There’s also this – unless we slide today before the close the VIX will be closing above yesterday’s close. And that means we will have a bonafide VIX sell signal in place (noobs – that is relative to equities, not the VIX). Actually the smartest thing the bulls could do today would be to slam equities lower tonight near the close and thus shatter the formation. As a caveat – in the past few years VIX Sell signals have been rarer than pink circumcised unicorns. So it’s tough to say if they actually will be able to drag prices much lower. 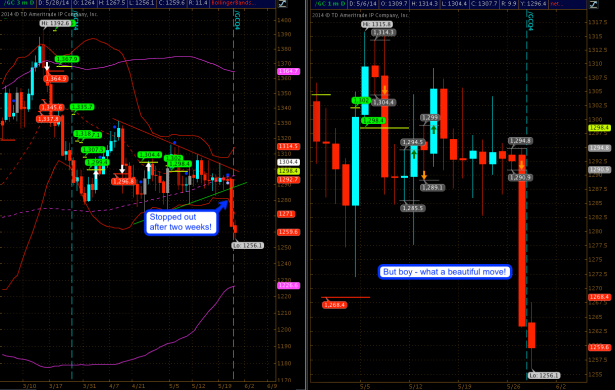 Gold – we’re all about full disclosure here at Evil Speculator and here’s one that didn’t play out as planned. You recall I was long for almost two weeks now with a well placed (so I thought) stop at 1280. Well, this turned out to be a profitable formation but not for the Mole as we slid the other way. And unfortunately I wasn’t around to flip the position – when I noticed what had happened it was all over. But in any case the TA was sound and this was a beautiful pattern – especially had you grabbed that inside candle at the tip. Well, you can’t catch ’em all – but we can try!

I have but one measly setup tonight and sorry guys – unless I want to find myself tarred and feathered I have to keep that one for my subs (they are an unruly bunch).