Yesterday I asked for bearish evidence and we got served a heaping platter of it today: 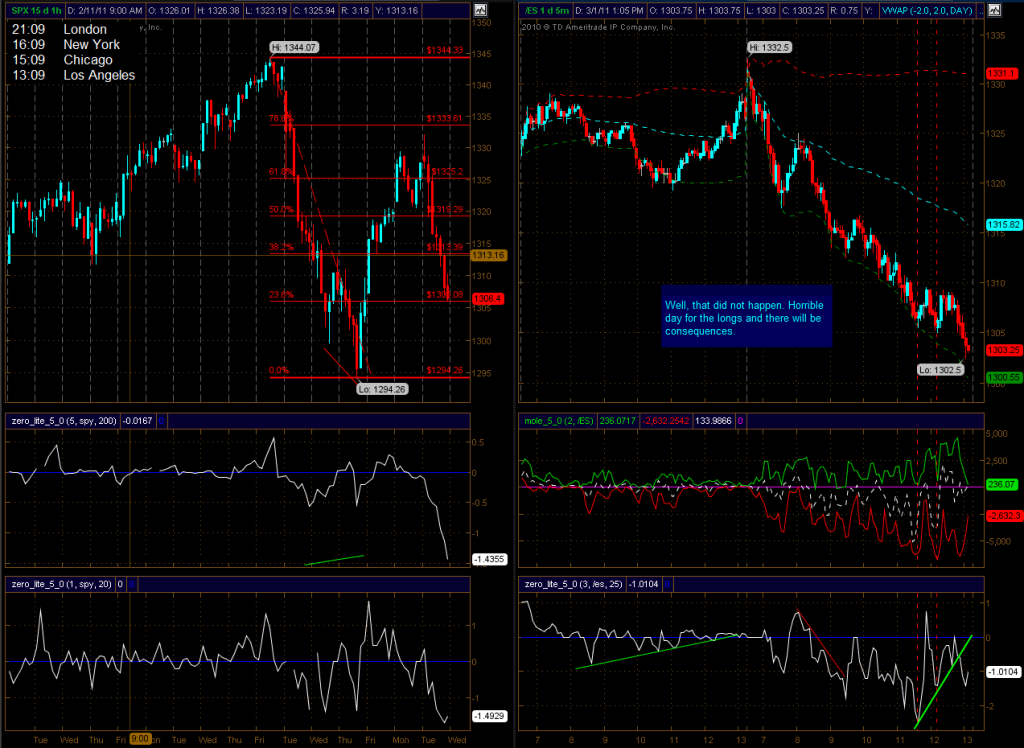 This was a solid down day as evidenced in price and the ZL readings. As you can see the hourly Zero is now painting a respectable -1.4 signal – on both the smoothed and raw panel. Plus we dropped from near the 78,6% fib back to the 23.6% fib – not a good day for the longs and it may lead to an epic assfucking with the bulls on the receiving side (Scott’s words btw – not mine – I would never curse in my posts – hehe).

The Zero Lite remained in negative territory all day. What was particular interesting – and something I pointed out – was that quick spike up around 11:30am PST (2:30pm EST) which immediately failed and did not meet any further buying interest. This is the exact inverse of what we used to see on the bearish side – every time the grizzlies would drop the tape to some support level the marines would storm in and take it all back.

Well, apparently this beach was out of reach for our intrepid friends at 33 Liberty. Even with over $100 Billion in outstanding POMO cash this tape is at least looking like it’s ready to drop further. More on that further below for the subs.

I was pretty stoked that Geronimo was sitting this one out and then at the very end of the day it decided to take a long setup. Which of course got stopped out. I don’t think it was a bad setup – the situation was ripe and beyond this being a losing trade I have some important thoughts which I will share below.
[amprotect=nonmember]
Charts and commentary below for anyone donning a secret decoder ring. If you are interested in becoming a Gold member then don’t waste time and sign up here. And if you are a Zero subscriber it includes access to all Gold posts, so you actually get double the bang for your buck.
[/amprotect]
[amprotect=1,9,5,2]
Geronimo gives us important clues about this market. That last trade should have worked out – the timing was right, the setup was good – heck there was even a divergence on the Zero Lite! So, not to make dumb excuses – a losing trade is a losing trade. However sometimes you got to look behind the obvious and by doing so you may catch a glimpse of the bigger picture. In order to do that let’s look at today’s VIX chart: 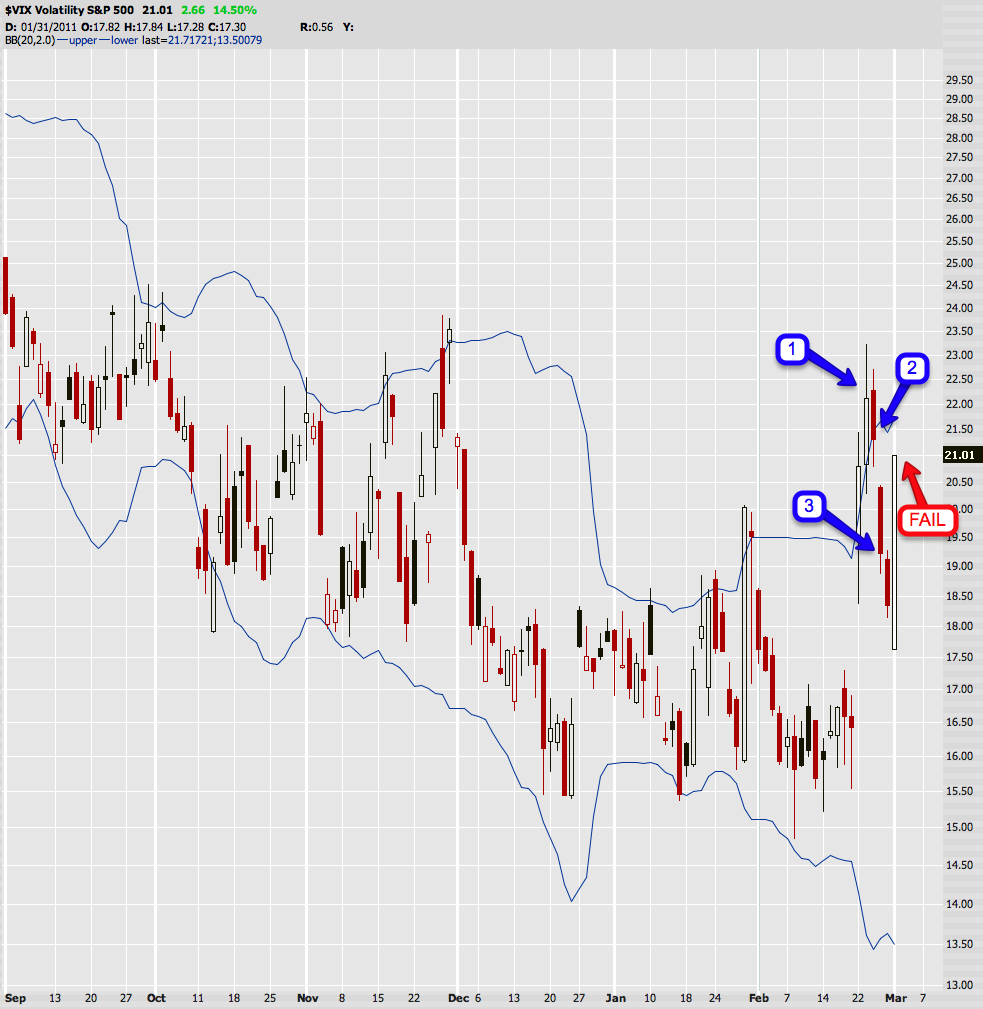 Look at this chart – forget about the markings for a second. If nothing else we can agree that this represents an extraordinary condition as a 30% drop in volatility followed by a 15% ramp is something that should raise our eyebrows. It’s something to take notice of. We are now seeing increasing volatility in the VIX – yes, I’m talking about volatility in volatility 😉

More technically speaking it represents a failed VIX buy signal. And that is important as this has not happened in nearly two years. We are mere days away from the 2-year anniversary of the March 2009 lows and since that day the bulls have been ass raping the bears San Quentin style (Scott’s words again – not mine – I’m way to sensitive to use such foul language).

And that fail will most likely have consequences as it has the potential to be a game changer. Am I talking Primary 3 here? Not really – I have long given up on waiting for Godot. But it’s very much possible that the longs have finally worn out their welcome and this may have been a first wake up call. Heck, maybe at some point we’ll actually see a normal market again – remember, one that goes up and down?

Let’s also not forget that today was the first trading day of the month – which traditionally has a long bias. To see such an epic fail on a day like this is very bad medicine for the bulls and it also finally broke a long winning streak. 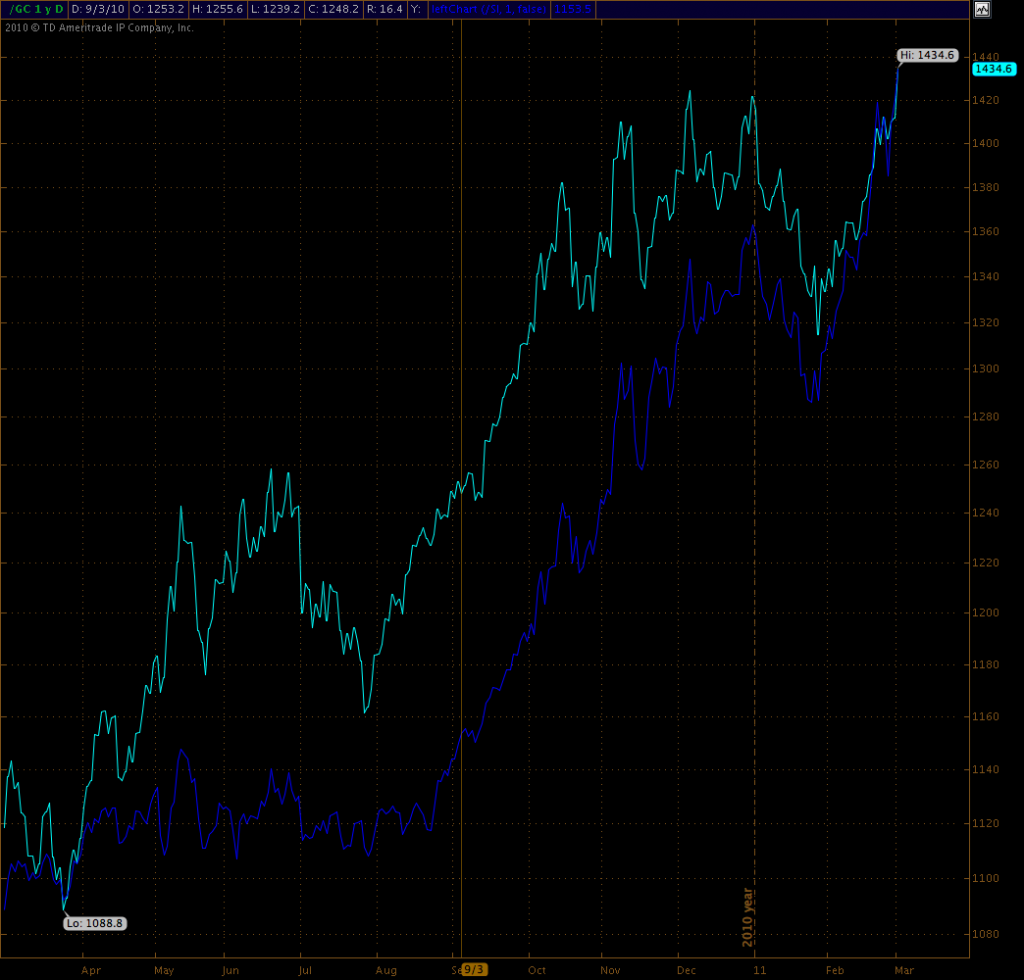 Scott is still in his PM short trade I think – but I was stopped out today. After a week of initially moving in my direction and then bouncing back and wasting my theta it was time for me to let my lottery tickets go. Not much lost here and I did point out that it may take several attempts to catch this one. But this time was not the time and I await further evidence before I try again. 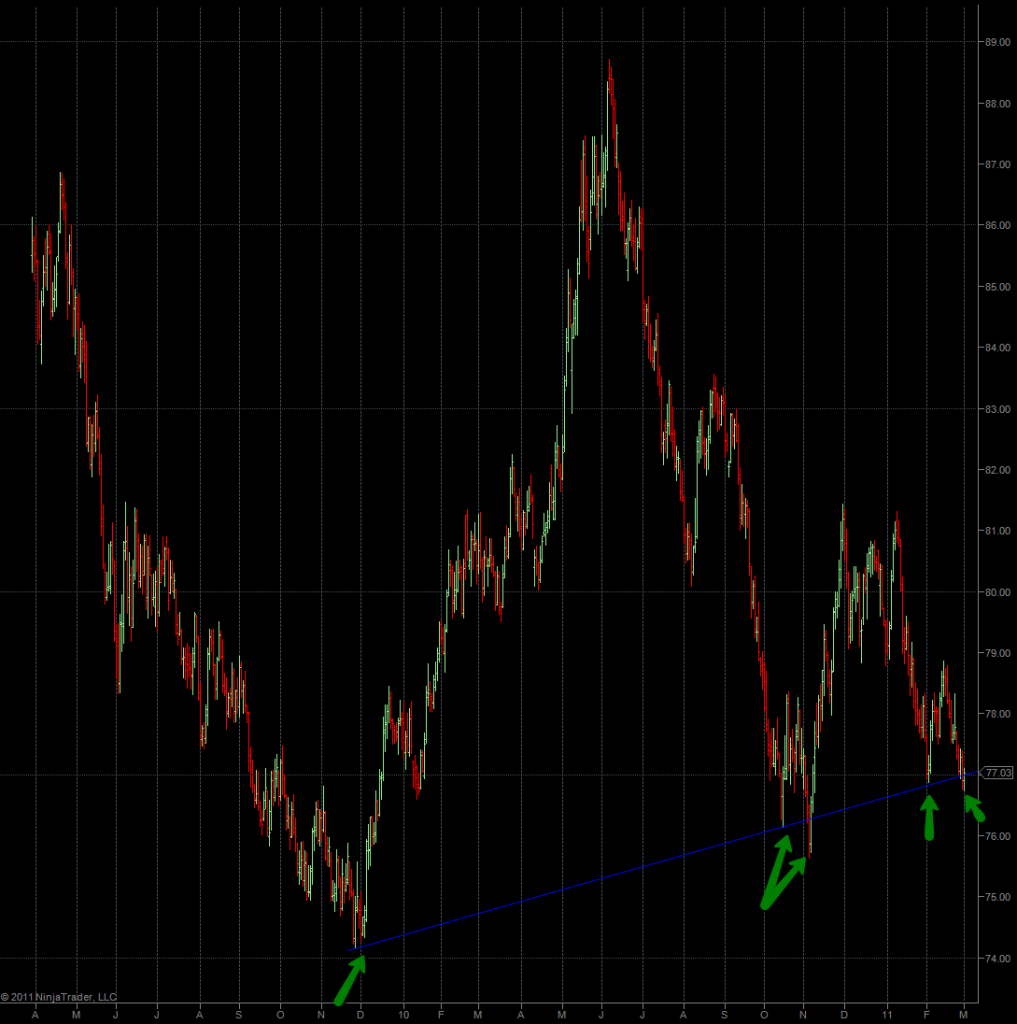 Old bucky meanwhile is literally clinging to life. I posted this chart a few weeks ago and suddenly it’s starting to pop up all over the web – go figure 😉

Make no mistake, if 77 gives with a vengeance the DXY is going to drop into the abyss – game over. I really don’t hope this is going to happen as I gasoline is already selling for over $4 here in Los Angeles. Last time I saw gas hit the big four was in 2008 and we all know what happened then – I’m not a fundamental trader but even I worry when it’s obvious that consumers are unable to pay for basic necessities and transportation. 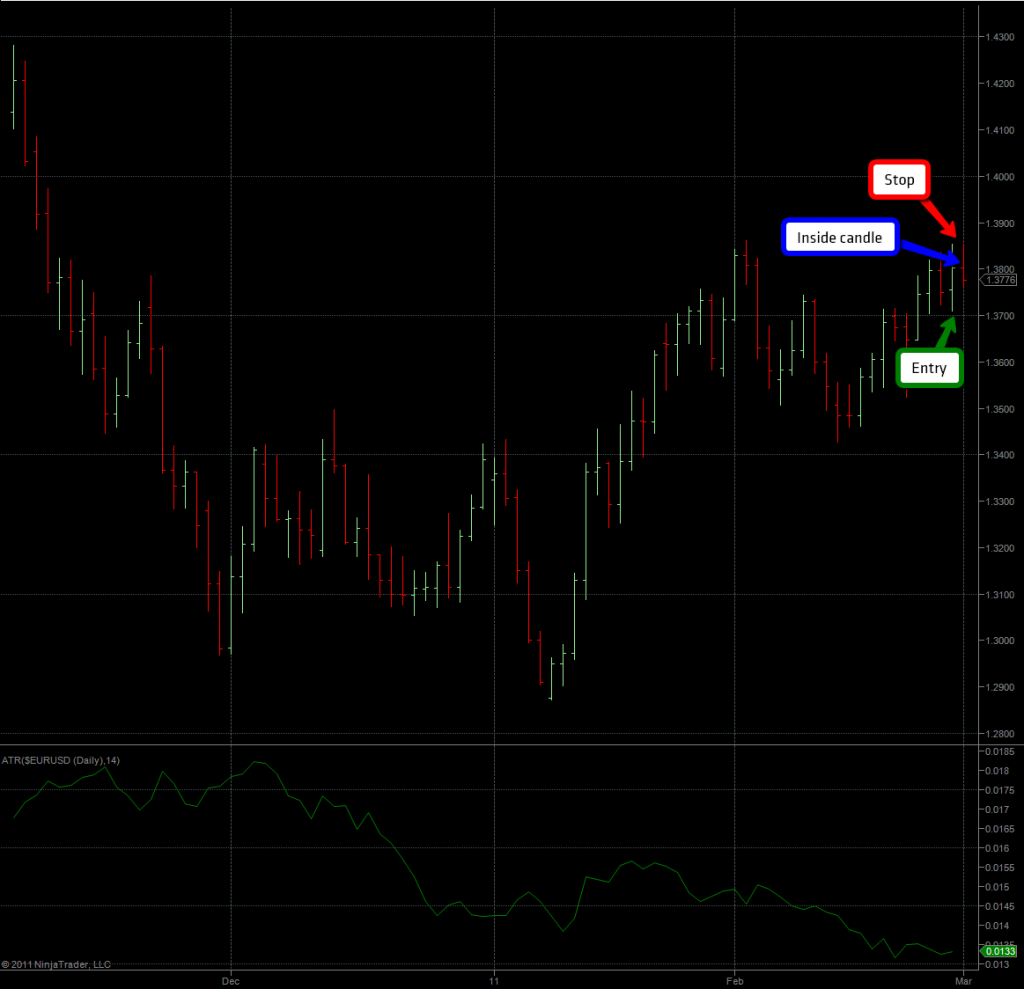 Scott is busy tonight but he wanted me to share this short setup in the EUR/USD with you. As you can see it’s the type of inside candle that makes ole’ Scotty drool with anticipation. 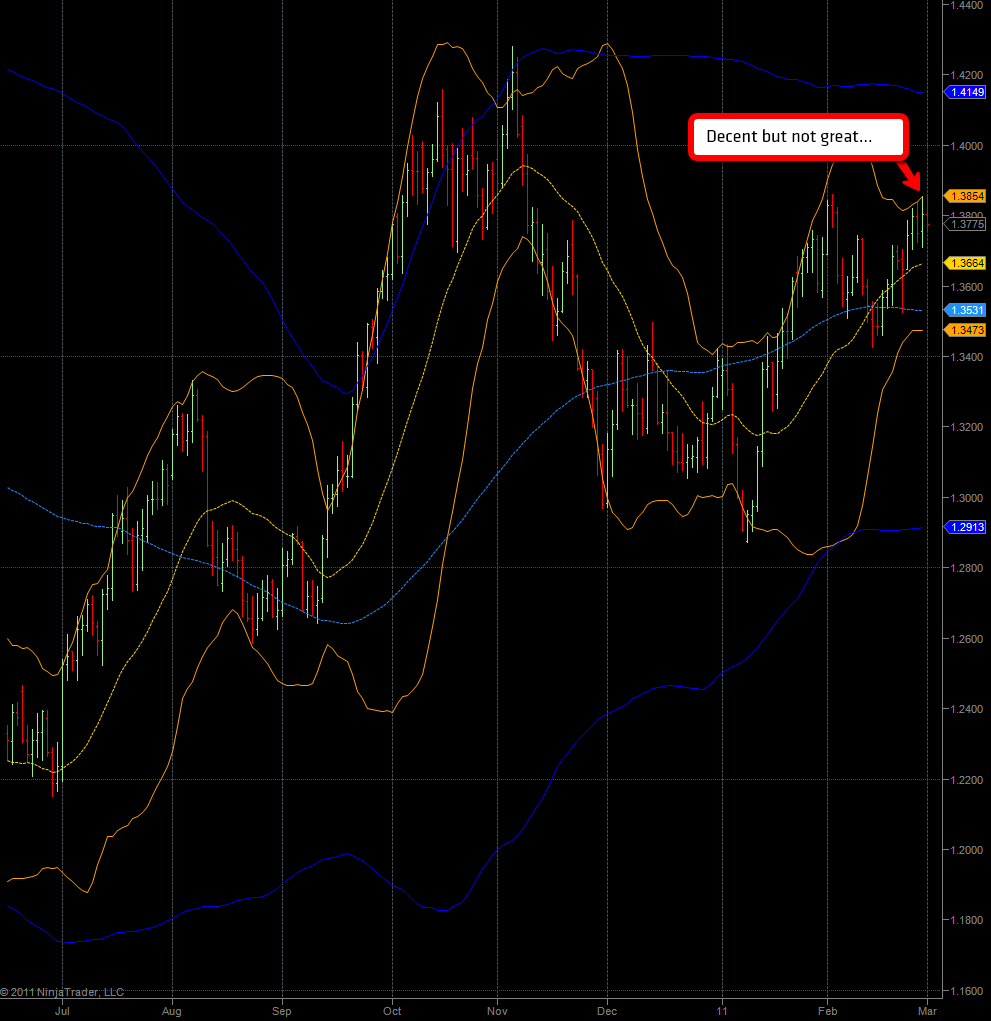 Personally I don’t love but it’s not because I think it’s bad but because I trade currencies a bit differently than Scott. See, I would have wanted to get in at the top or outside that upper BB line. And when we were near the 1.385 mark I did check it out but did not think the odds were good enough.

But if you trade this follow Scott’s rules – entry on the breach of the prior daily candles’ low and stop at the top of that same candle. Pretty simple – you can even switch to a long trade if/when you get stopped out. Not my type of play but it seems to be working for Scott.

Today was either a warning signal or a game changer. I have not completely decided just yet. We have those alternating days of bearishness/bullishness and at some point the tape needs to pick a direction. Back in my EWT days I called this situation ‘1-2/1-2 hell’ – which refers to a setup that can be interpreted as either the C wave of a zigzag down or a succession of 1-2 waves preceding the long end of the stick which is a third wave ramp up. Based on today’s action I am looking downward but until we take out 1294.26 we should not dismiss the bulls just yet. After all they have somehow managed to pull the cart out of the mud on way too many occasions.

If you are itching to get a piece of this bearish action – just don’t. It’s not worth it, especially after this massive infusion of vega today. Futures are a different story but if you are trading those for more than a few months you most likely know what you are doing and don’t need my advice. In any case – if this is for real there wil be push back eventually and another ramp higher. That will be the right moment to strike and get positioned – and by then we’ll have a lot more evidence to work with so your trades will be based on solid evidence. Not a guarantee by any measure – but there are none in this business, sorry folks 😉