Times are tough for technical analysts. Quite frankly, there’s not too much that makes sense these days – many of my usually prescient momentum charts are starting to resemble Escher paintings. Here’s one: 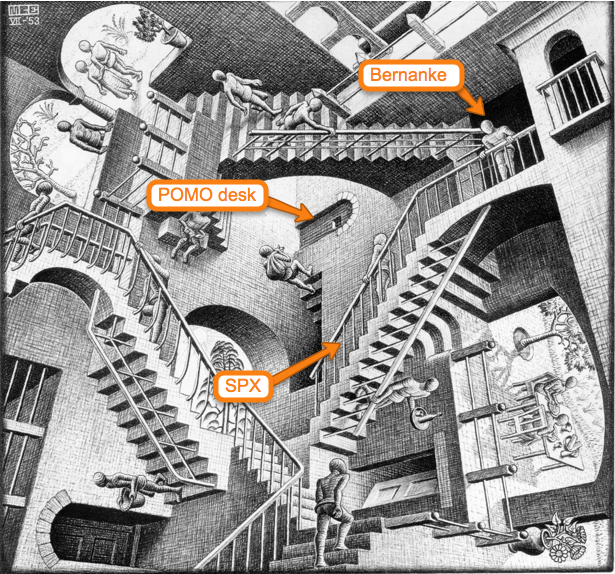 Except of course the Fed’s POMO schedule (which posted just now) – which as expected will paper this ramp up well into February, thus completely counter acting any seasonal (or demand driven) retracement. This is the bears’ worst nightmare.

Of course a true technical analysts recognizes non-confirmation pattern and is able to correlate them with either trend continuation or trend changes. Which is why I believe I have not been completely useless in the past few months 😉
[amprotect=nonmember] Charts and commentary below for anyone donning a secret decoder ring. If you are interested in becoming a Gold member then don’t waste time and sign up here. And if you are a Zero subscriber it includes access to all Gold posts, so you actually get double the bang for your buck.
[/amprotect] [amprotect=1,9,5,2] 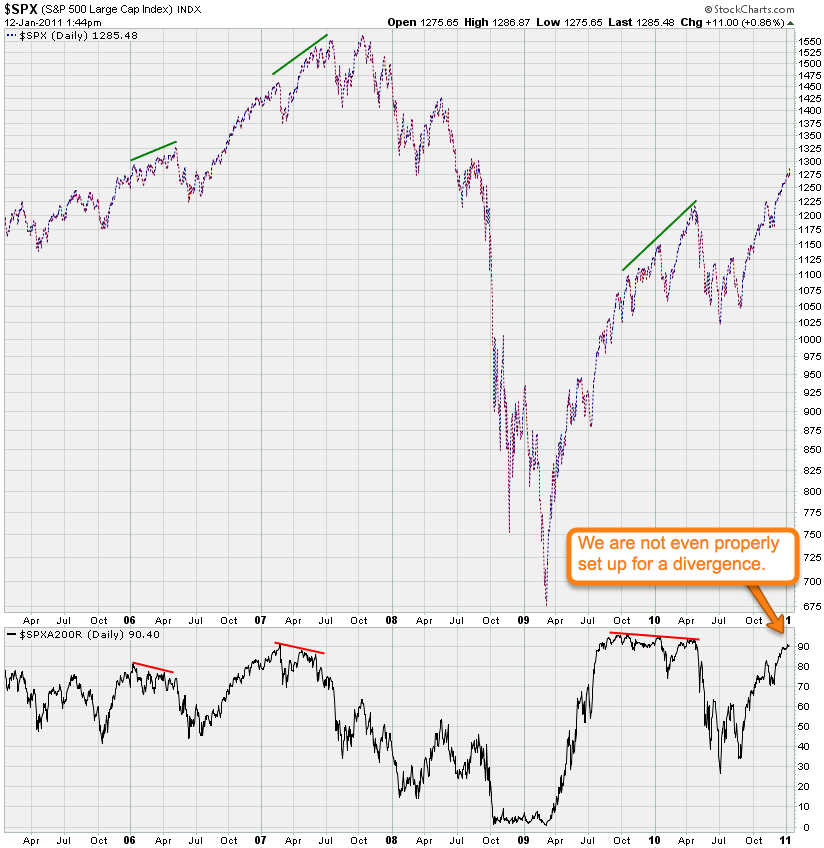 The SPXA200R (percentage of SPX symbols trading over their 200-d MA) is only now pushing into territory that may in the end paint a divergence. Again, not looking good for the bears right now. Even if a divergence started to develop right now it would probably take about two months to kick in. Will we see a repeat of 2010? 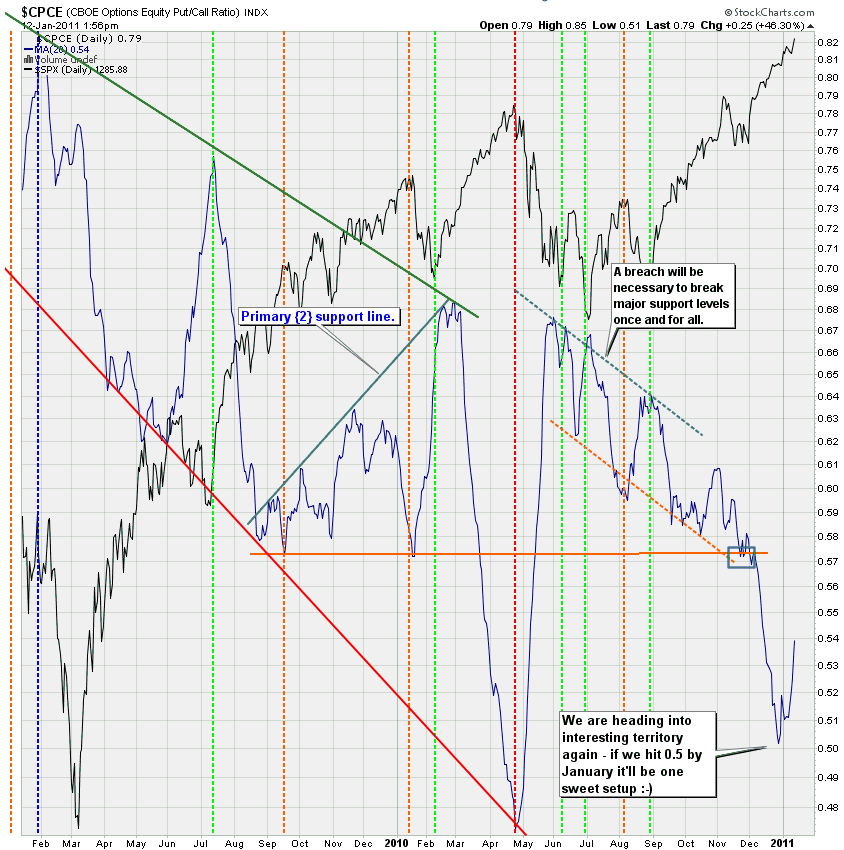 I posted this chart a few weeks ago – I think it was in early December. I actually left my labels on it as they represent my thinking at the time. Well, I was right that the 20-d MA would hit a CPCE of 0.5. What I did not expect was a snap back from there without prices even so much as skipping a beat. Again, this is extremely bad for the bears as the short squeeze is on and we may revert back into more neutral territory without as much as a push back. 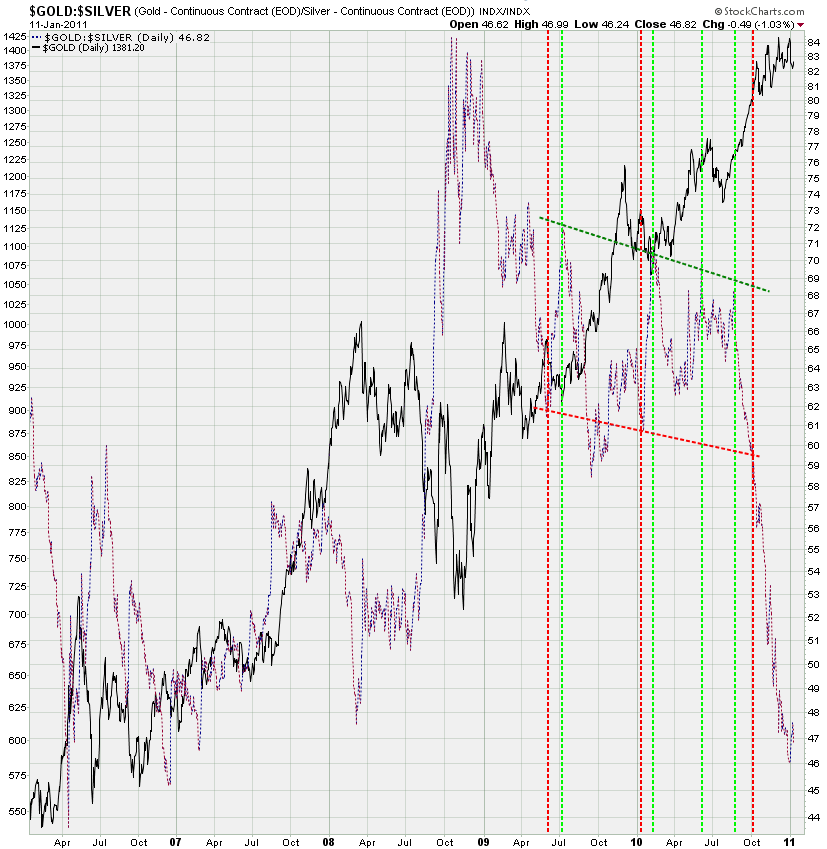 My gold:silver ratio chart – gold spot in black. As you can see silver has been going gang busters against gold. Which has many gold bugs worry about a snap back. Well, as I told you a few weeks ago – precious metals are a pain in the ass to trade and they usually turn when you least expect it. And I don’t think that time has come. Before silver and/or gold are ready to turn we’ll see a short squeeze first – we may even paint a new high. After that – around two/three weeks from now precious metals may be ready for a retracement.

As for the Dollar – it’s still not giving either camp any hint on where it’s going to swing. If you recall – I predicted that the FX sharks would milk this cow for all it’s worth but even I didn’t think they’d manage to stretch this situation into mid January. I don’t see any edge for a trade there at the moment. Best to let things sort itself out and wait for a solid setup.