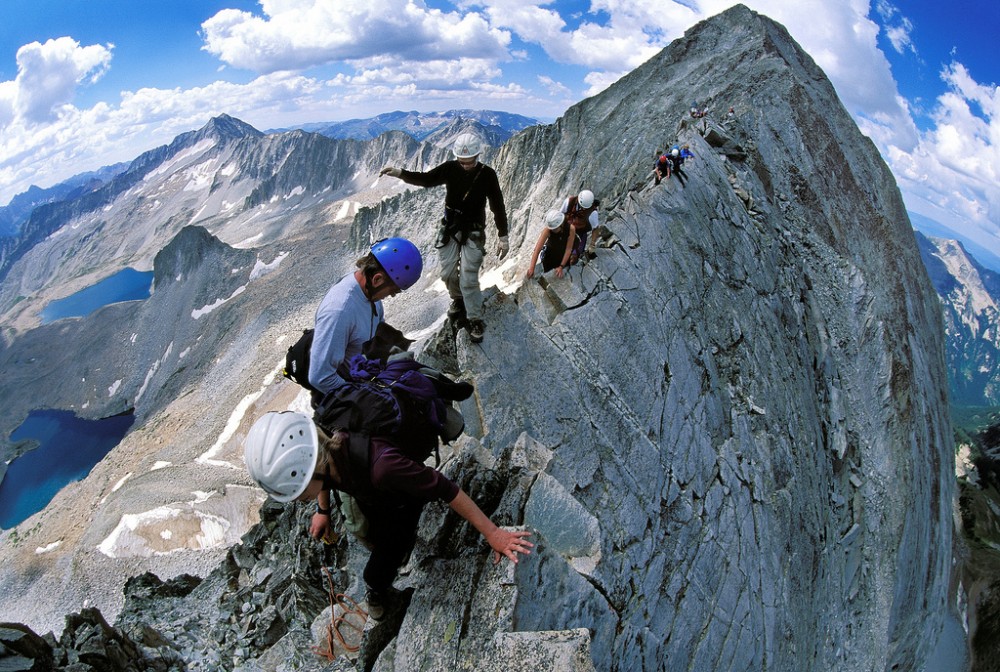 Yesterday’s post on volatility introduced you to the basic concept of realized volatility (RV) and how to interpret it in the context of your trading activities. We clearly demonstrated that volatility flows and ebbs in cycles which we can categorize into distinct volatility phases. On a short term basis trading volatility break outs seems tempting except that picking the direction can be tricky as many futures (and forex) contracts produce noisy candles ahead of trending moves.

Obviously the intent is to draw in suckers on both sides of the spectrum before picking a direction. Timing the best moment to hop on the bus is also tricky as volatility expansion may occur right away or several hours later. In a nutshell – it’s easy to get shaken out in the process which can quickly produce consecutive losers. 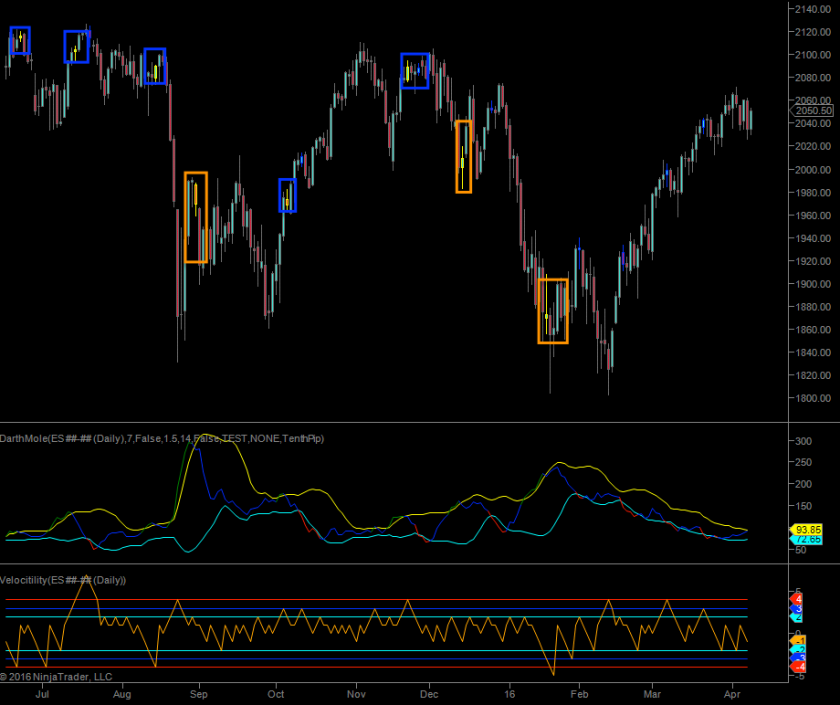 I know what you’re thinking – so how about using more longer term charts? Well, in theory yes, although it seems that volatility breakouts are harder to predict. What seems to work well however are volatility slow downs. My research shows that once volatility pushes beyond 1.5 standard deviations (plus/minus – it’s just a setting) odds strongly favor a slow down in the tape.

So how can we benefit form a drop in volatility? A pretty popular way to do it is to sell an iron condor, which is a four legged option credit spread. If you are unfamiliar with option strategies then don’t fret – we will cover the iron condor and other strategies in exhausting detail in the near future. For now all you need to know is that an iron condor benefits when prices do not move outside a defined price range. As such iron condor sellers love sideways choppy tape that doesn’t go anywhere. Heck, they must have made a fortune last year!

The one problem with selling condors is that it’s tough to do on the futures or on forex. Yes options exist for both but having hosted a trading blog for the past eight years I know for a fact that most of you guys neither trade the futures nor forex and certainly not options tied to them. The average retail rat primarily focues on stocks, ETFs, and options. So let’s take a look at how the equivalent ETF looks like: 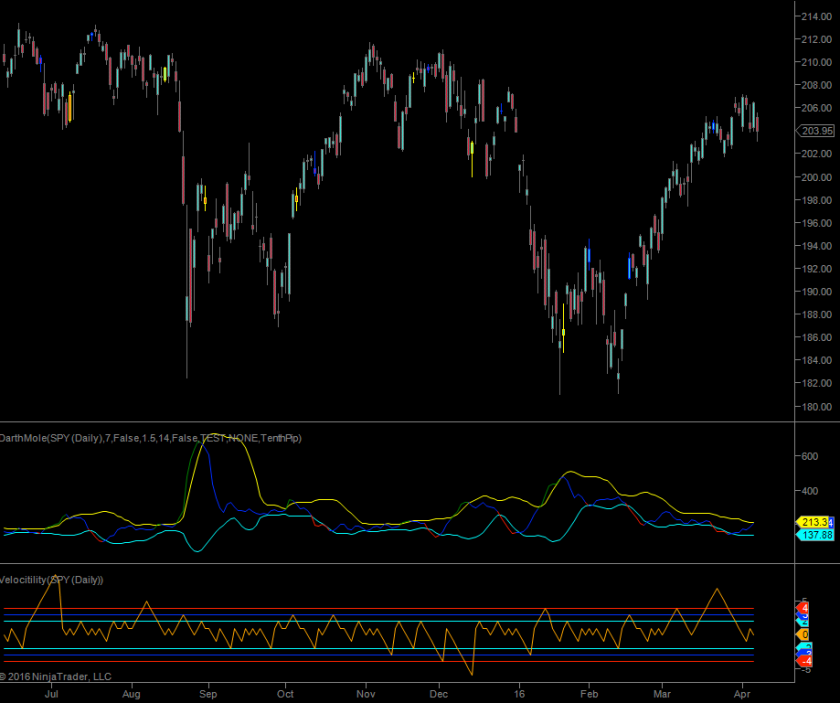 And that would be the Spiders which is tied against the S&P 500 cash index. Right from the get-go I really hate all those gaps. How is one supposed to properly evaluate volatility. And it seems that my DarthMole indicator (which measures volatility cycles) has a bit of a hard time with it. What do do? 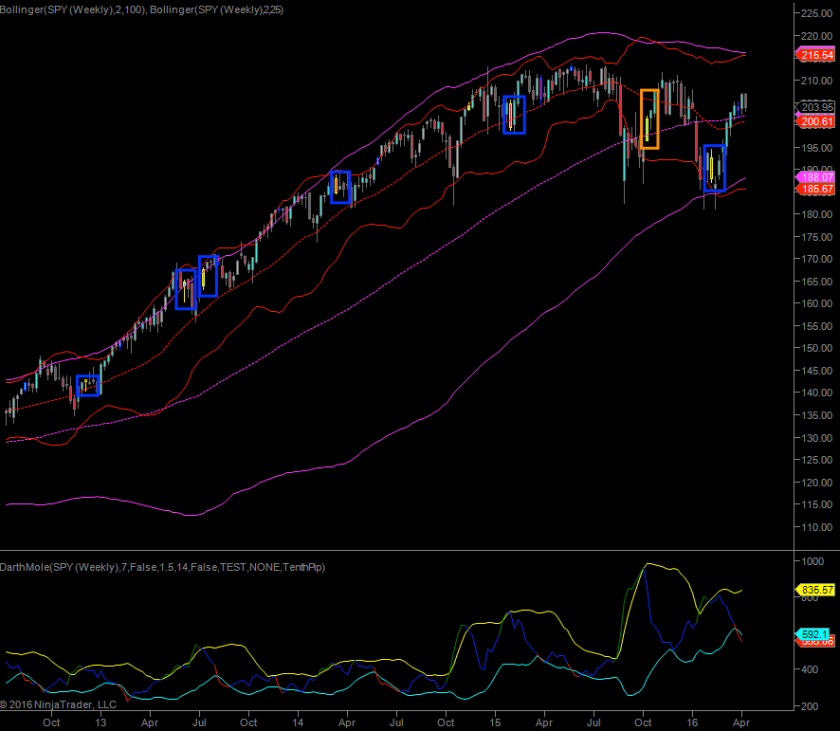 Well fortunately I also had the weekly panel up and here it’s a completely different ballgame. I concede that the cycles show almost no frequency or amplitude whatsoever. BUT volatility slow downs on a weekly basis seem to be very predictable. So let’s try a few more: 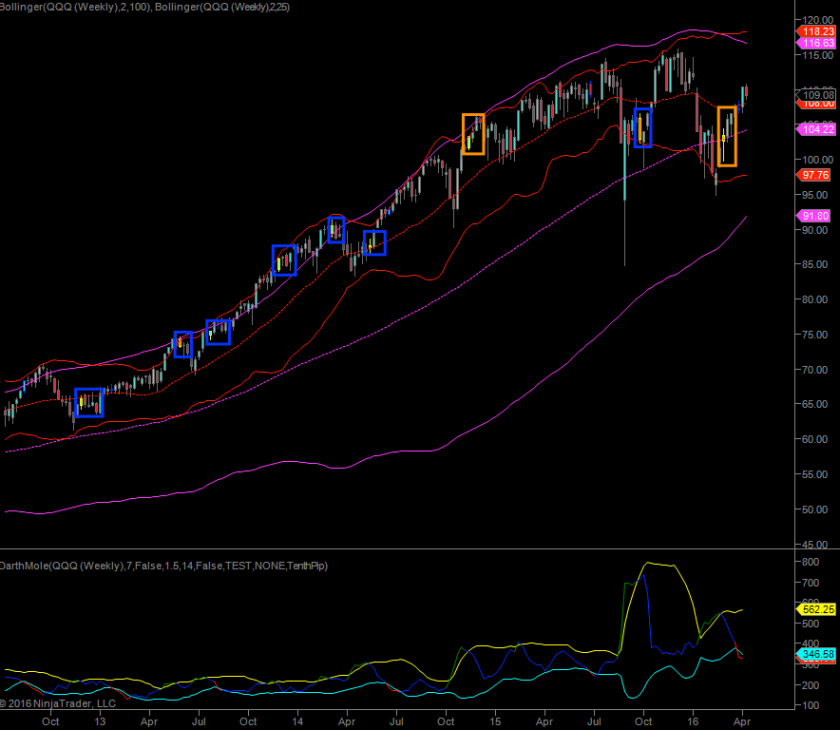 And here are the cubes (an ETF running against the Nasdaq 100). I am counting seven occurrences where selling a condor would have worked, assuming we would have used weekly options. Which as a matter of fact is exactly what we’re going to be doing here, but again we’ll cover that later. 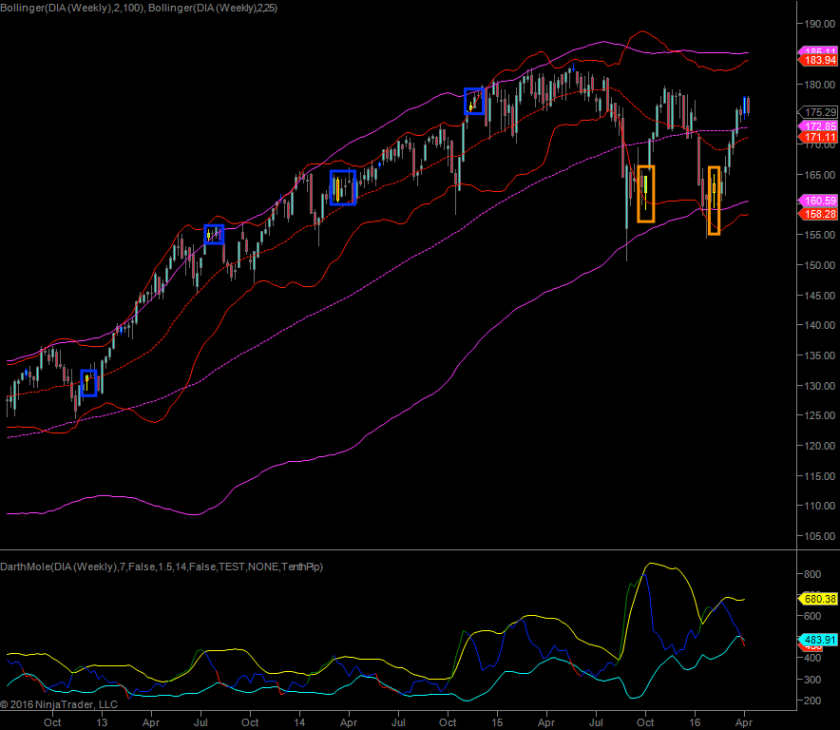 Of course the diamonds can’t be left out – the two last times turned into losers. So a good rule IMO is to not expect low volatility after high IV moves (when a snapback has good odds). 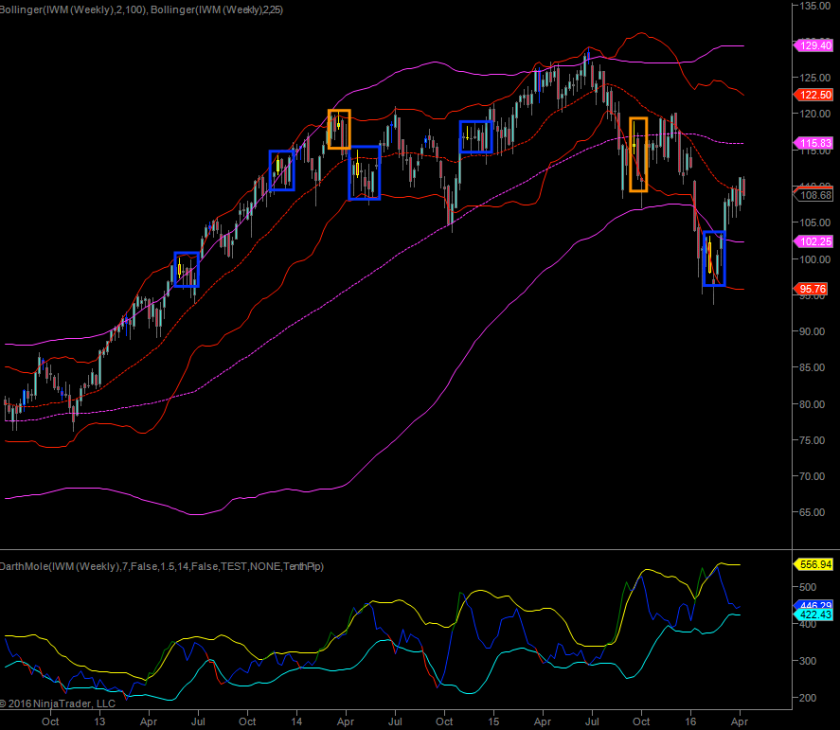 Here’s the IWM (running against the Russell 2000). Not sure if I would have ten the last one but seems to have very good odds for predicting volatility contractions. 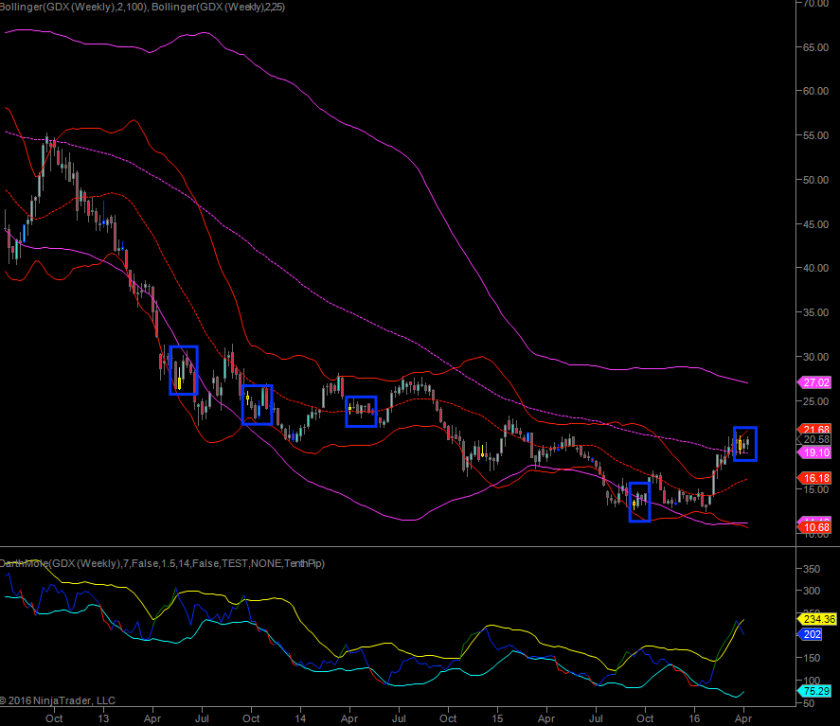 GDX is a gold miners ETF – it seems to be begging for iron condors.

But we’re just getting warmed up… I’ll be adding links to the ETF specs below in case you don’t know the symbols: 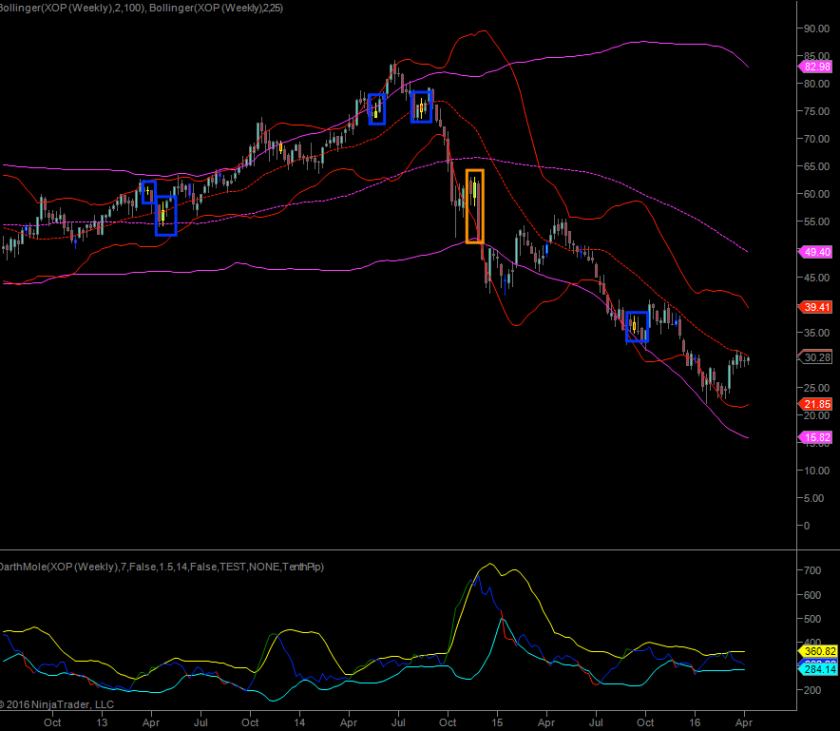 XOP – very very juicy IMO – it actually is a mover but the yellow candles signal slow down almost every time. 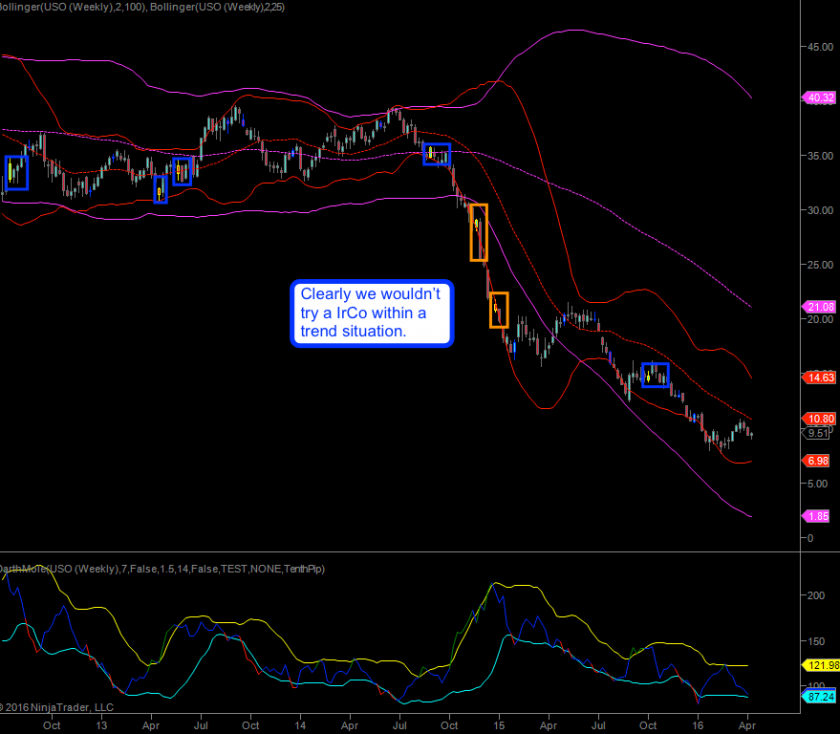 USO – I think we all know that one – looking very good there. Only caveat, and that perhaps applies to the others as well, is that trying an IrCo during a strong trend is probably ill advised. 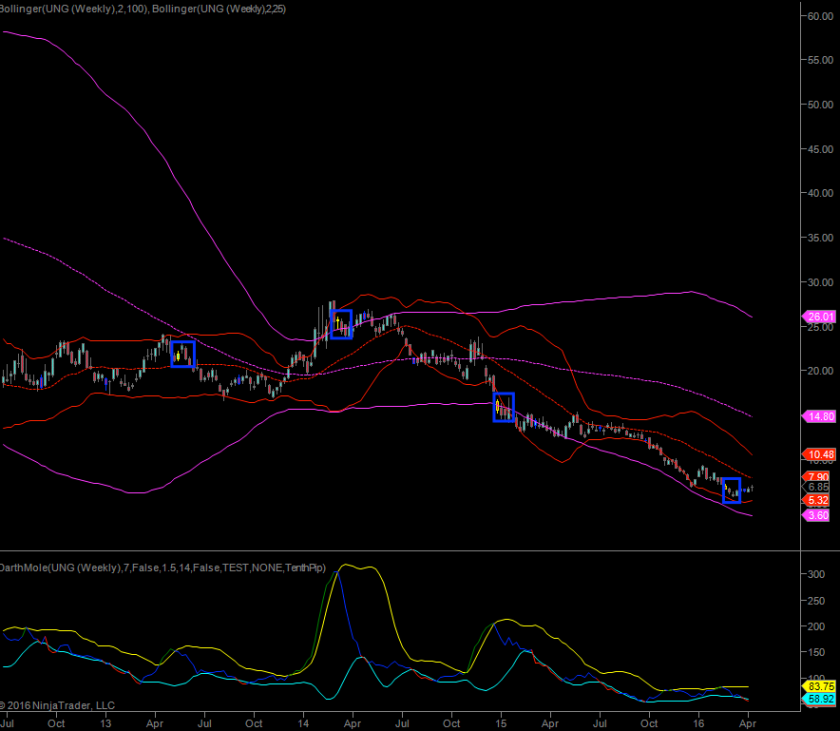 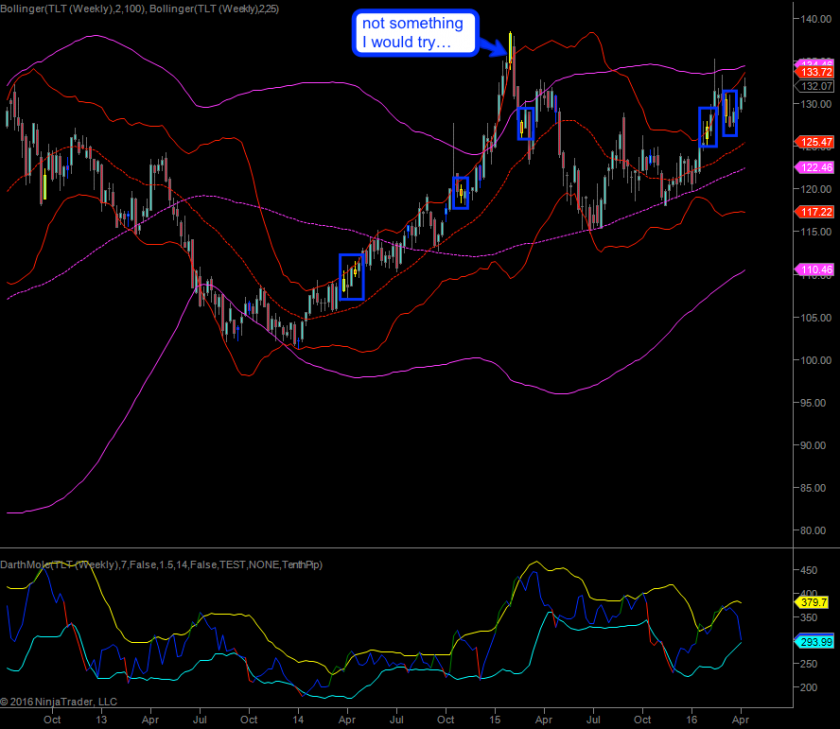 TLT – seems to work well despite general trendiness. I would however define a wider range as slow downs still seem to move up a little during a trend. However these are weekly options, so entering after a yellow candle and waiting one week should work brilliantly. 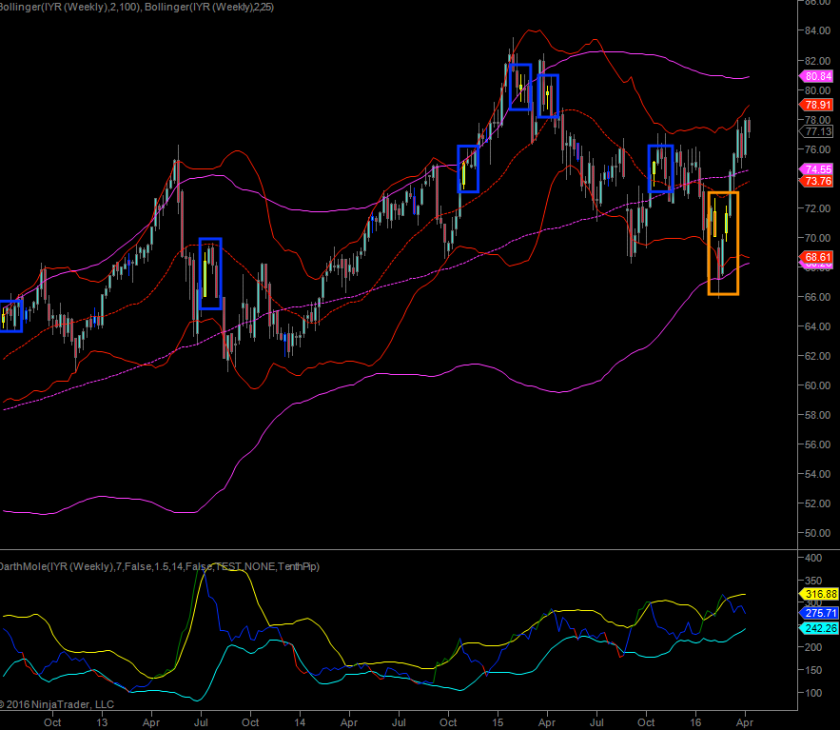 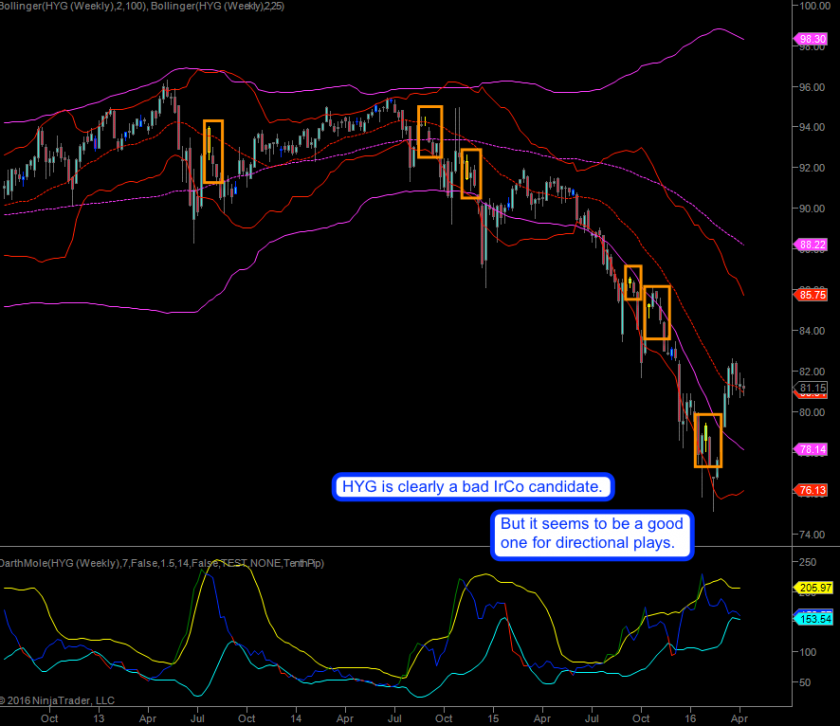 HYG – high yield corporate bonds and the only odd ETF out. As a matter of fact once it kicks into high gear it usually keeps on moving in the opposite direction of the yellow candle. So this one may be good for a directional play. 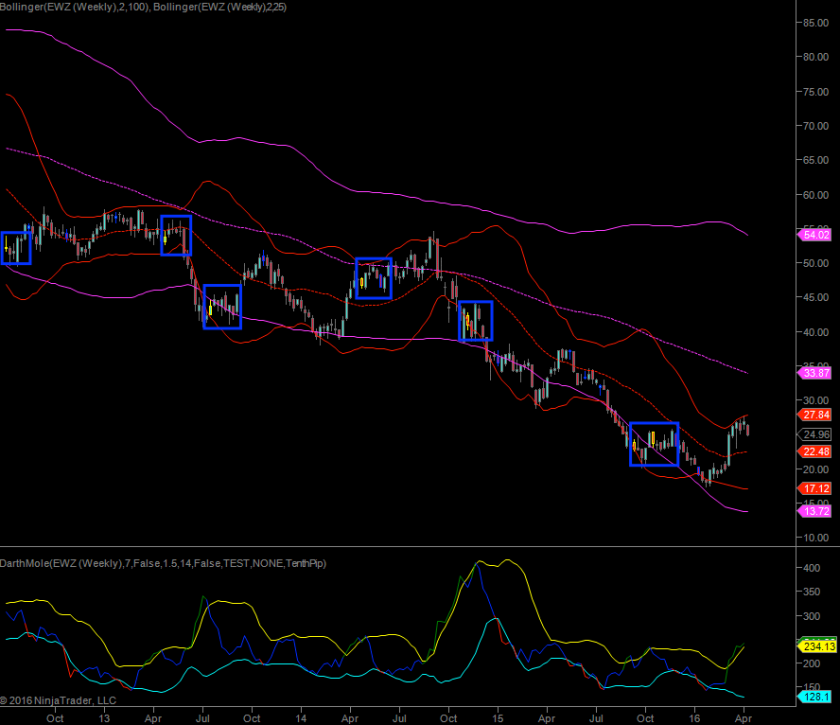 EWZ – those Brazilians not only seem to love waxing private parts and skimpy bikinis but iron condors as well. Who would have guessed? 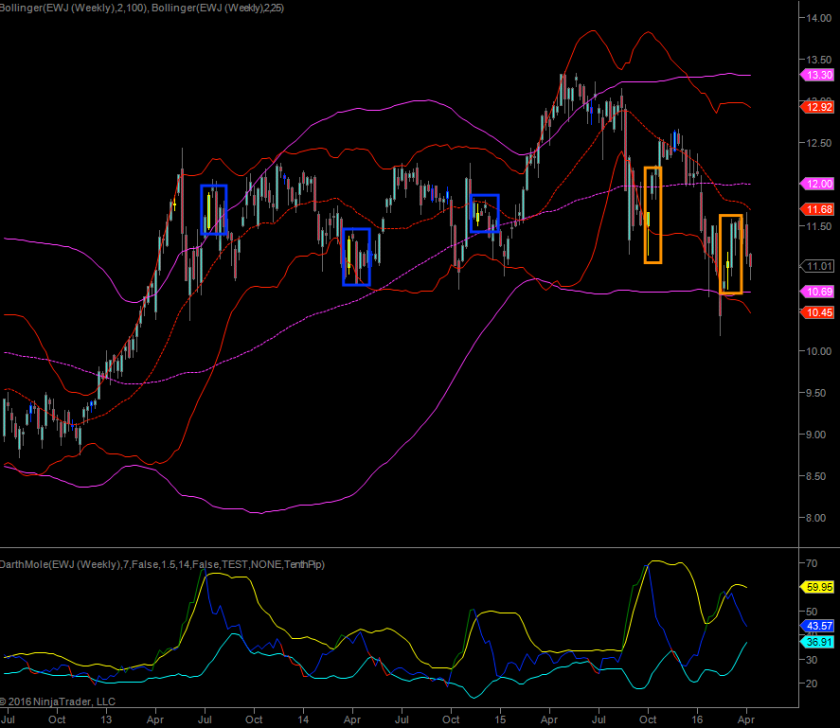 EWJ – Japan goes three to two but the sample size is low. I’m undecided on this one as the Yen experiences a lot of manipulation. 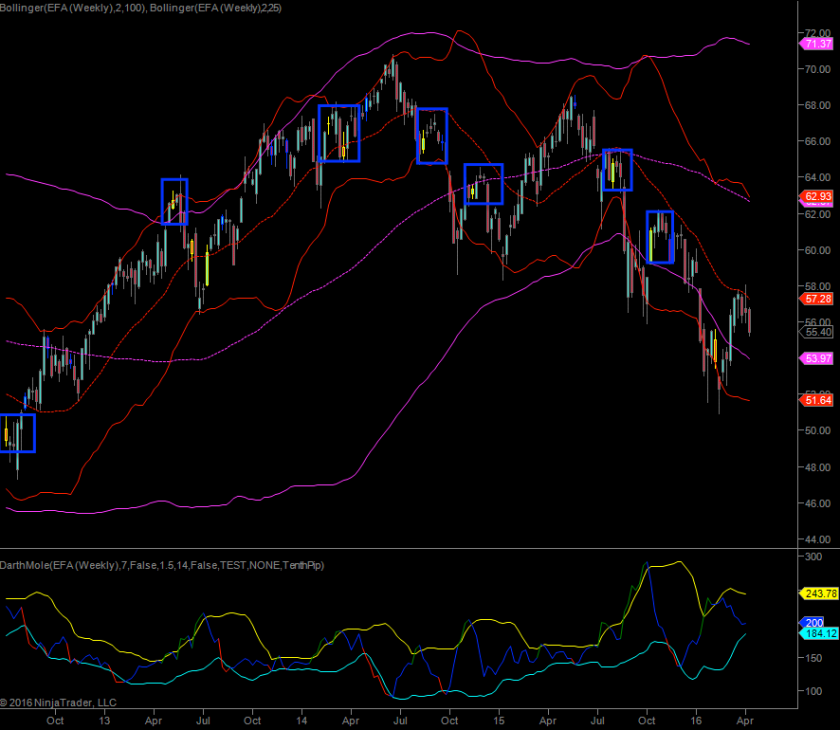 EFA – eight winners and two losers, depending how you count it. For a weekly the fourth one on the left may actually have worked as the next candle does not reach far and precedes a big move. Not sure if I would have taken that one though. One of my rules would be that the yellow candle remains within a certain ATR range. 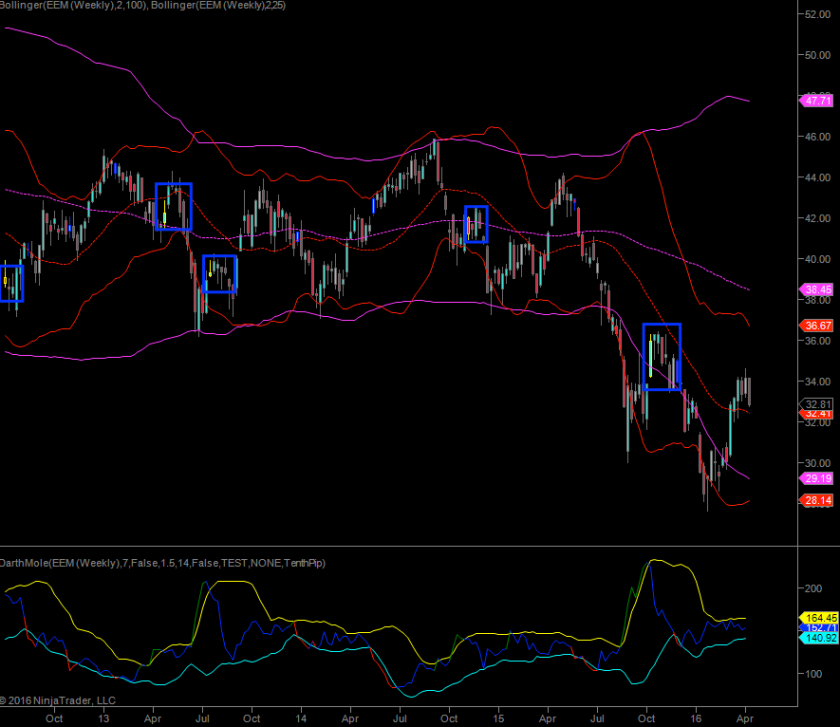 EEM – emerging markets also a clear winner in my book. The second one from the left may be counted as a loser depending on the range, so let’s call it four winners and one loser.

Judging by a cursory review of the most popular ETFs it appears that selling condors in anticipation of volatility contractions has a high edge across a laundry list of market verticals. Thus iron condors will most definitely become part of our option trading arsenal going forward. Next week we will continue this series via a Forex volatility review and we’ll also pick up our option education series. 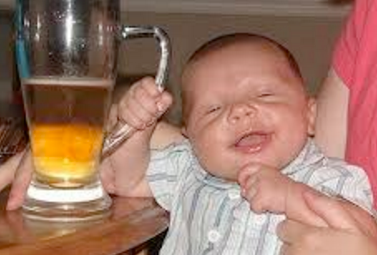 Now relax and enjoy your weekend, because clearly we’ll be very busy bees this spring. I’m very much looking forward to putting together some juicy volatility plays in the coming weeks. Prost!