I’ve coined a new song I would like you guys to chime in on:

Another U.S. institution bites the dust – here’s the [current] Bloomberg spin – things are moving at lightspeed these days and chances are the situation has changed three times by the time I’m done writing this sentence:

The Federal Deposit Insurance Corp. plans to take control of Seattle-based WaMu, the biggest U.S. savings and loan, according to the CNBC television network, and New York-based JPMorgan will buy deposits and branches, the Wall Street Journal said, without citing any sources. The FDIC insurance fund is not expected to contribute any money, the Journal said.

This seems to be turning into a weekly FDIC kabuki dance, except that we get a bank failure Thursdays and Fridays now. 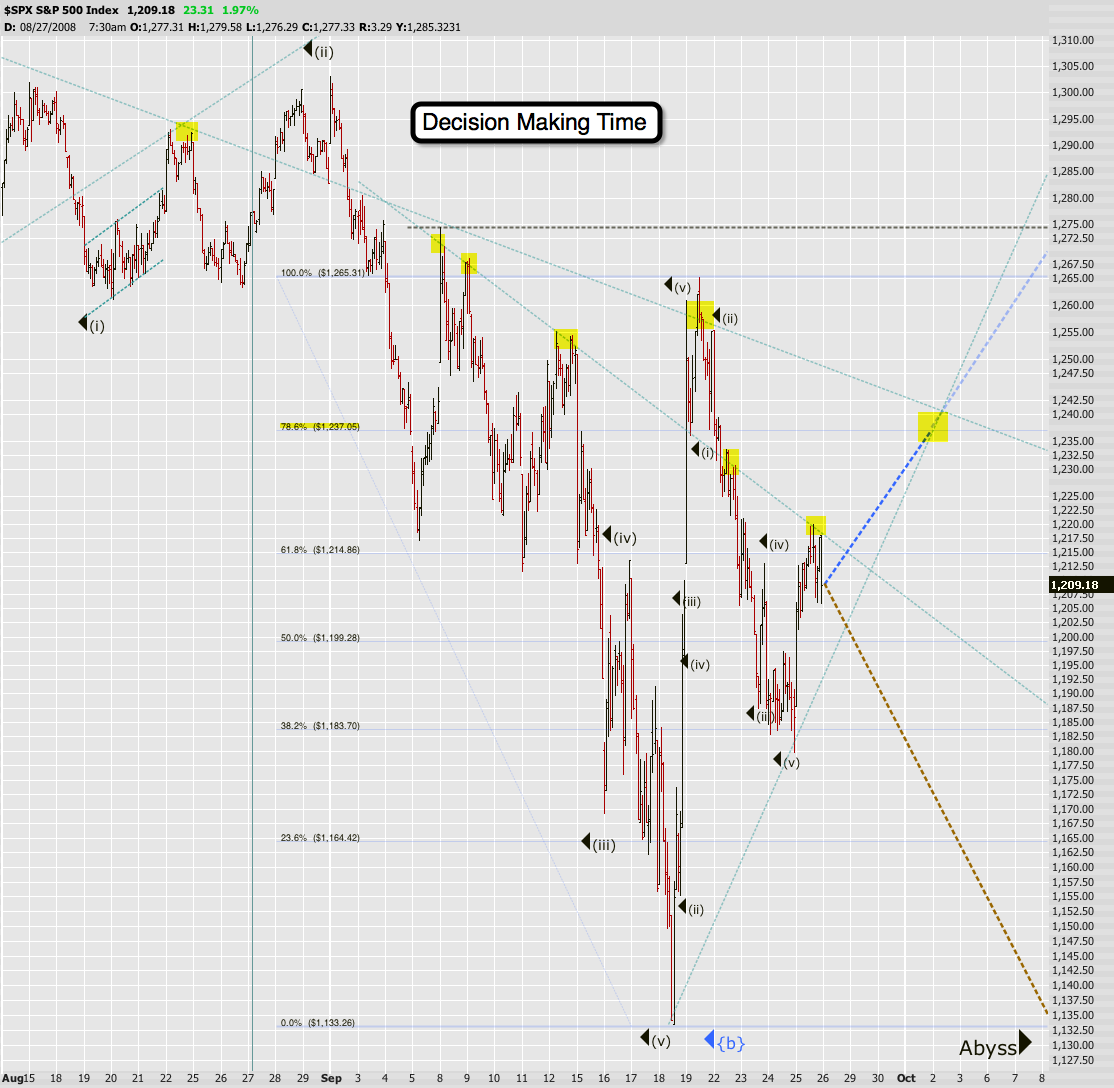 If you come across a fork in the road - take it!

Today’s tape featured more of the stair-step sideways action we’ve come to enjoy in the last few days. A day trader’s paradise – I got so bored that I started to post day trades in my intra-day updates – which were spot on mind you. If you took that trade you made some easy coin – send me pictures from whatever strip joint you decide to blow your ill-gotten gains on. I personally have not taste for dipping into the futures, although we don’t get some kind of resolution soon,  I might change my mind.

What (almost) surprised me was the bullish breadth in all three major indexes which stood in stark contrast to a wild sell off just before the close of the bell. If that doesn’t make a statement then I don’t know what. Let me see – SPX: 4.15:1 positive – $INDU: 3.3:1 positive – $NDX: 2.7:1 positive. Right, that’s a sell signal if I ever saw one, n’est-ce pas? Seriously now – it’s pretty obvious that there is some monkey business going on and that the Feds have been opening up their TOMO and POMO repo pool to their Primary Dealers (e.g. Goldman Sachs, J.P. Morgan Chase. Citibank), who apparently work under the Fed’s direction, and which are able to use these loaned funds to buy or sell various securities and futures to affect the markets. At last count that floating repo pool was at above $425 Billion – yup, you can move some markets with that kind of spare change, especially when everyone else has stepped to the sidelines plus some major hedge funds were taken out a week ago by dropping a nuke into short sell headquarters. So, next time you see a sudden spike coming out of nowhere and taking the Dow up by 100 points, you know what you’re dealing with.

Let’s talk about the chart of the SPX above, which addresses tonight’s main concern of all you loyal leeches. I have heard tons of postulating and diverse theories regarding the bailout boondoggle in the last few days. Last time I checked the ticker it seemed a stalemate has developed, so what exactly is going to happen is anyone’s guess. But let’s cut out all that noise, shall we? Let’s look at the chart, because that’s what we have and that’s what we’re good at. And while we indulge in our nerdish ritual of attempting to predict the future by looking at squiggly lines and numbers let’s also keep something in mind Berk mentioned last night:

Buy the rumor, sell the news!

Sounds simple, doesn’t it? So how come 99.9% of investors fail to put it into practice? Because most of them are hapless idiots who are being taken to the woodshed by merciless beasts of trading like Berk and yours truly. As we are actually capable of looking at a chart, we see two directions as of now – no big surprise there. What’s interesting is the upside potential, which in my mind appears to be limited. To further clarify what I’m talking about for the numerous brain damaged among you I have taken the liberty to highlight various resistance zones which the market seems to respect strongly. One of them was touched today around the 1220 zone and was followed by the end of day sell off. There is little confidence in this market, despite the prevalent assumption throughout today’s trading hours that a bailout of some sort was almost guaranteed.

So, the point I am trying to make is that the rumor is not being bought. Add to that a clear sign of caution on the part of the bond traders ($TNX painted spinning top today), plus a widening spread between the 30 year T-Bond yield and Moody’s Abb Corporate Bond yields, plus Mr. VIX still at 33, and it seems that this impending bull rally (if we get it) has little teeth. My long term Bullish Percent indicator ($BPNYA) is actually pushing into bullish territory and give it another day or two and we might actually approach oversold turf.

Considering all this I now believe that the {a},{b},{c} scenario I have been contemplating increasingly appears to lose its luster. Can it still happen and can we still get a major rally up? Sure, anything is possible, but the evidence seems to point towards systemic fear and weakness in the market. Which would mean that a bailout might be good for a little rally but I expect it to be followed by a long drop into the abyss. If we DON’T get a bailout this weekend, well – your imagination is as good as mine.

Hence, starting tomorrow I will slowly start accumulating far OTM puts (Nov/Dec), which I intend to hold all the way. IF we get the bailout and the market pops I will NOT sell as I expect an ensuing sell-off hours or at minimum days later. 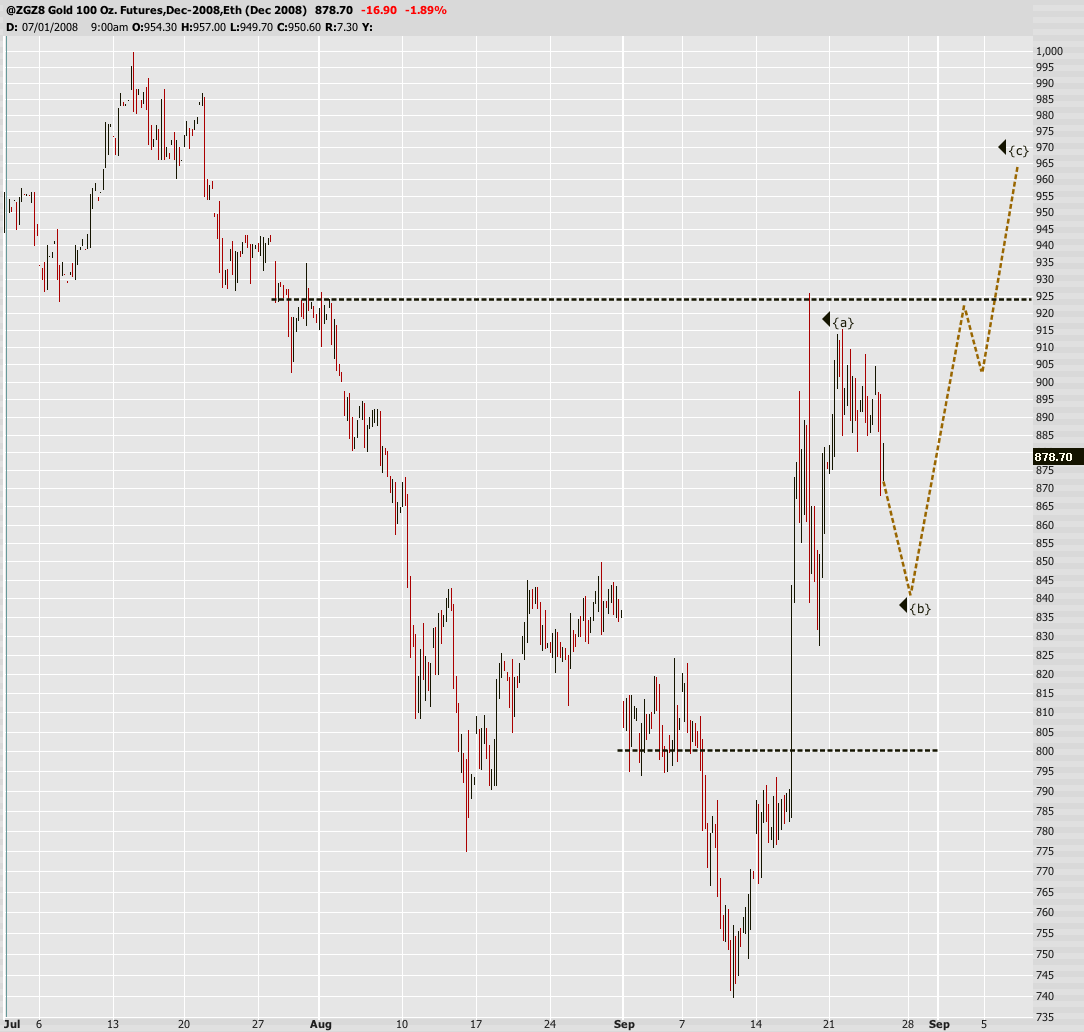 Let me conclude with a quick Gold analysis I posted earlier today. The precious metal seems to be tracing out an {a},{b},{c} and the length of {b} which we are tracing out will depend on external factors. If there won’t be a bailout I think Gold will push up and that hard, otherwise it’ll probably time the beginning of its {c} wave with the onset of the sell-off in the equity markets.

However, I want to caution everyone once more that the upside potential here is limited – we won’t see Gold at 1000 anytime soon. My staunch belief is that this nothing but yet another gold bug trap. Will I grab some GLD calls again once I see a good entry? For sure – but if there is an explosive move up I will be taking profits that very day. You have been warned – and btw – no, I won’t debate my reasoning for my paranoid disposition when it comes to Gold. Just know that I have been trading Gold futures for quite a while and people have been disagreeing with me for months now – at their own peril.

Good luck out there – and keep it clean. And remember: One day you will be telling your children or grandchildren about all this.

UPDATE 9:03am EDT: Berk sent me the following bit last night which I feel I should share with the rest of you:

As tempting as it is to jump in here, I would not be surprised to see this decline reversed mid-day, as one final blow to any aggressive short sellers.

If the markets are being rigged, this is the perfect opening to crush the people they are trying to kill.

Frankly, the thought has occurred to me of course and I discussed various scenarios with Berk yesterday afternoon. He’s making a great point here and this is a scenario I wouldn’t put past the PPT and its henchmen (and I have to admire their evil instincts frankly). So, please be aware, that buying puts at this stage is a HIGH RISK endeavor and that there is a great chance that you will lose the entire premium. There are no prisoners in this game as you have been made aware last Friday if you ever had any misconception to the contrary.