MENU
Sections
Login Register
Now Reading
wHicH eXcHaNgE sHoUlD i uSe?
NextPrev
422 422
0

wHicH eXcHaNgE sHoUlD i uSe?

Scott here, filling in for Mole while he’s yodelling.

Mole mentioned he’s been getting some hate mail about adding more coins to the tradeable universe so I thought it might be helpful if I explain the rationale behind it (you make more money) and some solutions to common problems that won’t take you more than 10 minutes to fix.

I think we can all agree that the strength and ferocity of the recent bear phase in crypto has had the effect of a “great reset”.

The hot stocks in 2007 were Rio Tinto and BHP… they are nowhere now.

The hot coins in the 2017 altcoin bull were ZRX, TRX, NEO, OMG… again well back in the pack today.

This is a chart of all the major altcoins off the July lows. DOGE is up a pathetic 19% while LUNA for example is up 269%

When Mole and I got up to our elbows in the data the vast majority of the coins we owned before are recovering, but way slower than the new breed.

That’s a big big problem. Momentum works because by riding the winners you are holding the hot coins. But nobody likes a losing coin, so holding them is likely to underperform the market.

On the first day of the month list all the stocks traded, ranked by the last 12 month returns. Buy the top 1/3, equally weighted.

On the first day of the month list all the stocks traded, ranked by the last 12 month returns. Buy the top 1/3, equally weighted. 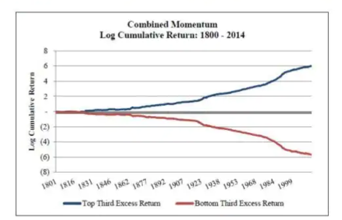 “Winning is a habit. Unfortunately, so is losing” Yogi Berra.

Mole and I aren’t about underperforming the market. And if we kept only underperforming coins in the universe we run a very real risk of the whole system not working at all.

What we did is expand the universe with some of the early winners, which are available on binance, but not binance.us and kraken.

Which is a good thing.

But you need to make some more exchange accounts. Yes I know it’s a bit of work, but let’s be clear.

Extrapolate through a 6 month bull market and you are talking at least hundreds of percent difference at the end.

It’s not a decision we made lightly.

Here’s the deal. All coins are available on Binance.com. Some are missing (not that many) from binance.us and a lot are missing from Kraken.

If you are in the UK, EU, Australia, Hong Kong, Singapore, New Zealand, Japan – Just open a binance.com account.

If you are in the USA you have several options.

Easy option – http://www.kucoin.com  – good exchange, easy to use, been around for years, accepts US customers without any drama

More complicated but ultimately more control option is to join one of the DeFi DEX (distributed exchanges). http://www.uniswap.com and http://www.sushiswap.com are the two biggest.

One thing I will say about the DeFi exchanges is that you need to use limit orders and not market, since the market makers are real sharks.

Anyway, I hope that clears things up. We don’t make system changes likely, and the only reason we would do it is because it both reduces the risk of things going wrong and increases the money you are going to make.

From where I sit the evidence is very clear that we are entering a fabled “turd of a turd” wave. Bitcoin, Ethereum AND altcoins all moving together, with small cap, medium cap and large cap altcoins going up at the same time.